Beware the Trump brain rot: The cognitive effects of this administration's actions could be disastrous

Democracy isn't all that's at risk under Trump's agenda. There's a 5-point attack happening on our nation's minds 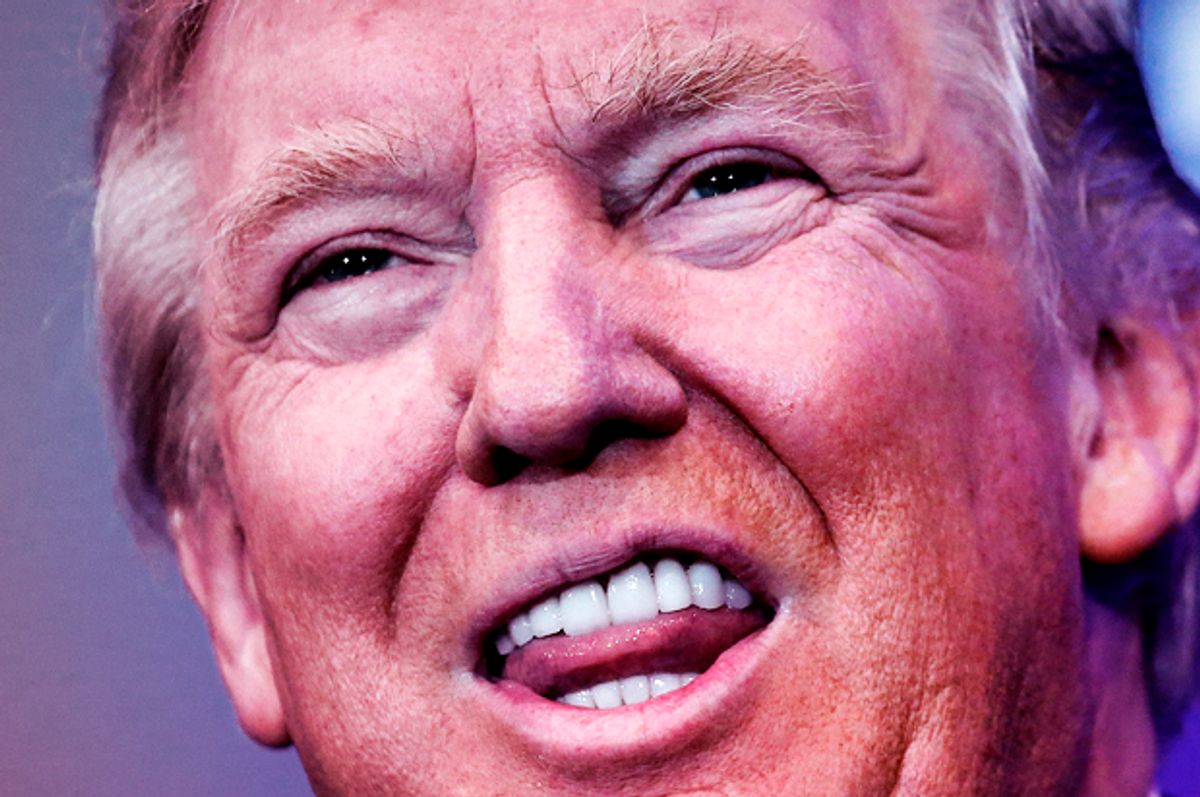 Thirty years ago one of the most famous public service announcement ad campaigns was launched. “This Is Your Brain on Drugs” featured a man asking the audience if they understood the dangers of drug use. He then held up an egg, saying, “This is your brain.” He motioned to a frying pan, “This is drugs.” He then cracked the egg into the pan and as the egg fried said, “This is your brain on drugs.”

Now just a bit more than a month into President Donald Trump's administration, I’ve found myself returning to the imagery of that ad because it seems to so perfectly encapsulate the cognitive damage that we risk as a result of the Trump presidency.

While there is little question that the Trump team is set to unravel our democracy, our foreign relations and every stitch of political progress our nation has ever made; that isn’t all that is at stake here. A healthy democracy depends on an active and engaged citizenry. It demands a citizenry attentive to issues and able to productively debate and dialogue. But, most important, it requires a nation that can think.

Stop for a moment, if you will, and attempt to take stock of the various phrases that you and your friends have been throwing out to describe our collective mental state in the Trump era. While some folks might highlight anger and a feisty sense of resistance, the majority of comments we hear refer to a sense of cognitive numbing and mental anxiety.

In an effort to crowdsource some of the responses, I asked more than 1,200 people via Facebook and email and received the following list: "wearing me out," "burning me out," "frying my brains," "beyond belief," "turning my mind into mush," "brain overload," "mental meltdown," “crippling depression,” “constant low level dread,” "making me numb," “stressing me out,” “abject horror,” “disoriented and scared” and "scaring me to death."

Others offered descriptions such as "nonstop," "overwhelming," "relentless," "mind-blowing," “devastating,” “exasperating” and "surreal."

One friend wrote, “I often wake up in the middle of the night thinking about Trump and unable to get back to sleep from anxiety.“ Another simply posted this Nicolas Cage gif.

In our efforts to make sense of all this we have often turned to George Orwell’s "1984." While the dystopian novel has a lot of insight to offer, it can’t actually capture the cognitive effects of Trumpism. And that's because the Trump team is not just brainwashing us or numbing our brains with Newspeak. It is actually implementing, consciously or not, a complex five-point strategy poised to make our minds shut down. Each of these tactics has a special impact on cognitive functioning, and until we understand what’s going on, we have no hope of stopping it.

1. An epidemic of lies

The lying of Trump is legendary at this point. But we have paid less attention to the cognitive impact of processing an endless stream of lies. As Maria Konnikova wrote in Politico, all presidents lie, but Trump is in a category of his own, with a whopping 70 percent of his statements coming in as false.

The lies are certainly bad, especially when they are the basis for policy. But Konnikova explained that one of the most pernicious effects of a serial liar is on cognitive functioning: “When we are overwhelmed with false, or potentially false, statements, our brains pretty quickly become so overworked that we stop trying to sift through everything.” For Konnikova the frightening reality is that Trump’s endless lying runs the risk of colonizing the brains of those who never even supported him.

Political comedian John F. O’Donnell did a bit on this exact issue for “Redacted Tonight,” where he explained that research shows that in order to cognitively process a lie, we first have to provisionally accept it as true. After accepting the lie as an idea, we can then reject it as false. The problem is, though, if we are overloaded with constant lies, our brains may become too exhausted to reject the lie. Before we know it, claims that are obviously false, like allegations of massive voter fraud during the past election, can seem true.

But there’s more.  Trump’s fabrications are a special type of lying. He is what CNN called the “gaslighter in chief.” Gaslighting relies on creating a parallel universe that blurs any real connection to the truth and it is a common practice for narcissists. “The techniques include saying and doing things and then denying it, blaming others for misunderstanding, disparaging their concerns as oversensitivity, claiming outrageous statements were jokes or misunderstandings, and other forms of twilighting the truth,” according to CNN.

Gaslighting is an especially abusive form of lying. Psychologists explain that it “can lead to the victim losing all trust in their own judgment and reality.” It results in self-doubt, angst, turmoil and guilt.

2. An assault on logic

Critical thinking doesn’t just require facts; it requires the ability to reason, deduce, infer and analyze.  Those skills are also under attack. Melissa McCarthy’s Sean Spicer impersonation while she rants about “your words” reminds us that circular logic, tautology and flawed thinking rule the arguments made by the White House.

Jeet Heer wrote in November that fact-checking Trump was simply not enough to understand the cognitive effects of his statements. Heer keyed into the fact that Trump contradicts himself constantly.

Contradictions, though, are only the tip of the illogical iceberg for Trump. President Trump and his team practice an ongoing and incessant assault on all forms of logic. And without logic, we can’t get any real thinking done of any kind. As I wrote before the election, the assault on logic will eventually make us all stupid, but in the short run it will wear us all down.

Now we have to contend with the reality that we have a government of bullying and bluster. Trump shows all of the signs of a malignant narcissist and that is the quintessential bully personality. His Twitter rants may be the most visible signs of this behavior, but it is a pervasive and ongoing feature of his policy.

Trump has also surrounded himself with bullies: From Steve Bannon to Sean Spicer and Kellyanne Conway, the Trump team consistently uses a tactic of bluster and bully to shout down, silence, shame and attack their critics. As Jeb Lund explained for Esquire, Trump’s “team is a hammer, and every problem, including you, is shaped like a nail. They have no sympathy.”

If there is one constant in the entire array of Trump positions, from the announcing the Muslim ban to eliminating Environmental Protection Agency references to climate change and from authorizing the Immigration and Customs Enforcement raids to making up terrorist attacks that didn’t happen — it is the bullying within them, the type of bullying that destroys lives and incites fear.

While those in the media are clearly on the front lines of these attacks, there is significant evidence to show that bullying is on the rise since the election. In schools, workplaces and communities, Trump-inspired intimidation is out of control. The psychological impact of this sort of harassment is anxiety, hopelessness, fear and anger.

4. The society of the spectacle

French theorist Guy Debord published "The Society of the Spectacle" in 1967. One of his famous theses was "All that once was directly lived has become mere representation.” For Debord, the society of the spectacle meant that the social relationship between people was mediated by images. But even more important he argued that "passive identification with the spectacle supplants genuine activity."

Almost 20 years after Debord published his book, Neil Postman wrote "Amusing Ourselves to Death," a study that argued for Aldous Huxley’s vision of a dystopian world, where people voluntarily sacrifice rights because they are too distracted by hedonist consumption to resist. Postman believed control of the population would come from substitution of entertainment for civic engagement. Postman was especially worried about the role that television was playing in shaping public perceptions.

Both Debord and Postman recognized that the mass mediated spectacle would have dire consequences for democracy and political action. Psychological research has also confirmed that constantly watching media spectacles has a negative effect on the brain. Consuming an endless stream of spectacle makes it harder for the brain to connect details to a larger context and leads to attention deficits and distractibility.

The Trump presidency is the first openly and unabashedly spectacle-driven administration in U.S. history. It depends on destroying the public’s ability to see the bigger picture and relies on substituting bluster for substance and glitz for reality. It becomes that shiny object we can’t stop watching. The longer we are mesmerized by it, the more our critical thinking suffers.

Remember when there was speculation that Trump would win but would immediately outsource his duties as president? Even in our worst nightmare, we could not have imagined that in only one month we would have such a violent flurry of executive orders and other devastating policy decisions.

As Jon Stewart put it on “The Late Show with Stephen Colbert,” “The presidency is supposed to age the president not the public.”

Trump bragged on the campaign trail about his stamina. Sadly that seems to be the one thing he was not lying about.

The endless barrage of Trump is overwhelming us. As Frank Bruni  wrote in The New York Times, Trump “has succeeded at nothing so much as devising an analogue to the shock-and-awe military campaign: It’s the appall-and-anesthetize political strategy.” It is leaving us numb, in shock, exhausted and brain dead.

We may try taking a break from the news, but then we reconnect only to find out something horrible has happened while we looked away. It’s cognitively overwhelming.

Taken together these five strategies are destined to severely mess with our heads. This is your brain on Trump and it is not pretty.

Doctors report patients coming in and asking for medications to help with Trump anxiety. There are signs that the Trump administration will lead to additional medications being prescribed, extra ER visits, delayed procedures, missed work and more. Even without the intended destruction of the Affordable Care Act, there is real reason to expect the nation to suffer “a major medical toll from this election.”

You can hear your brain sizzling in the Trump frying pan and it’s the sound of the nation collectively losing its mind.

As dire as this all may seem, there are, however, ways to fight back and keep our minds from frying out completely. I’ll share those tips next week. Try not to crack up in the meantime.