Dance scenes in movies can be tricky, but sometimes magical

In film, you can do is use the camera to convey emotion in a dancer in ways you can't onstage 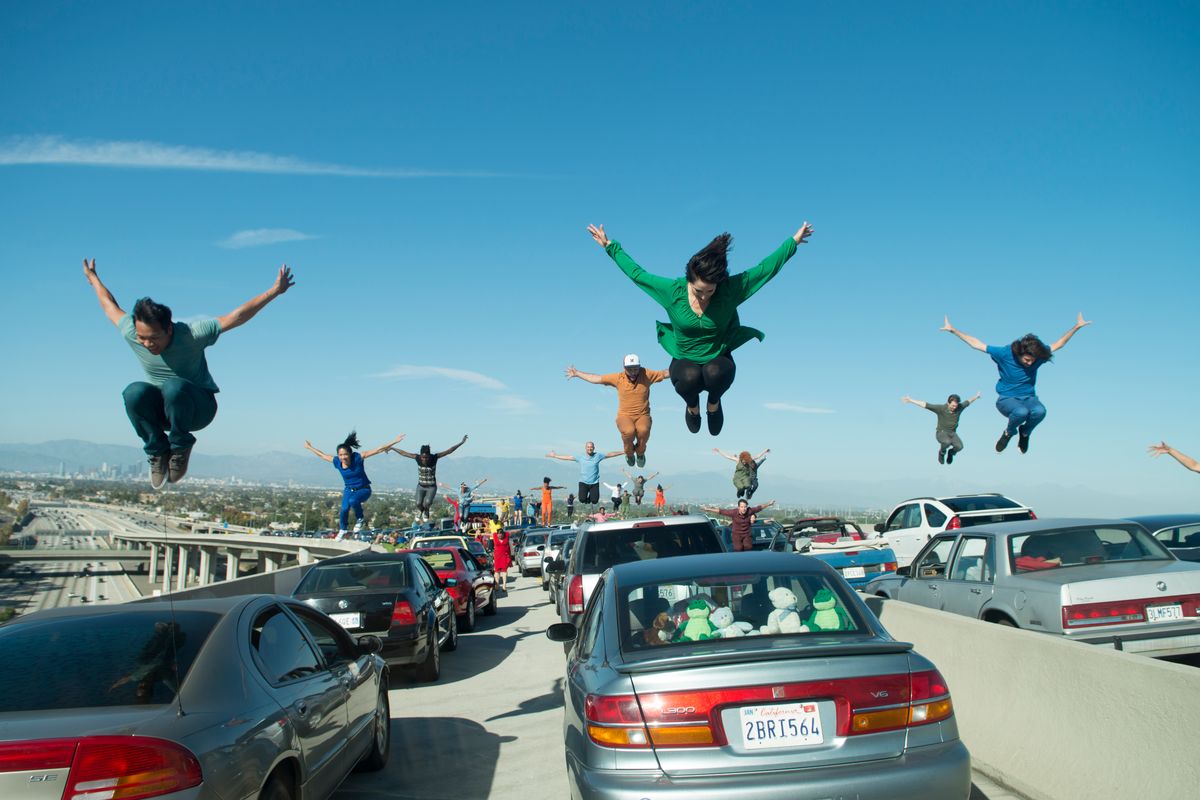 This image released by Lionsgate shows a dance scene from the Oscar-nominated film, "La La Land." It's not easy to stage a successful dance scene for the cameras, especially on a highway interchange, but when such a scene works, it can be memorable. (Dale Robinette/Lionsgate via AP) (AP)
--

Oscar front-runner "La La Land" opens with a bang, or should we say a burst — of leaps and pirouettes, not to mention bicycles sashaying along the roofs of automobiles. It's not easy to stage a successful dance scene for the cameras — especially on a highway interchange — but when such a scene works, it can be memorable.

One secret, says "La La Land" choreographer Mandy Moore, is not to compete with the camera, but in a sense, to find a way to dance WITH it. "When it's done right, it's this perfect marriage of how the camera is moving in conjunction and collaboration with the movement of the dancer," she says.

Dancing on a stage is three-dimensional; on a screen, you lose an entire dimension. But what you can do is use the camera to convey emotion in a dancer in ways you can't onstage. "You can see how dance changes the person — that's a key," says Wendy Perron, former editor in chief of Dance Magazine and author of "Through the Eyes of a Dancer."

Because everyone has their favorite dance moments in movies, and because the Oscars are coming, and because, hey, it's just fun to remember this stuff (all available online), here are a few scenes where the cameras helped create dance magic:

Yep, it was heaven

"I'm in heaven," Fred Astaire sings to Ginger Rogers, warbling Irving Berlin's "Cheek to Cheek" in the 1935 film "Top Hat." And so are we. "Fred is so cool and she's so coy," Moore notes, adding that the scene is so successful because it tells a story through movement. "They're almost a little icy the way they start, and then just this beautiful way that they open up through the performance, and they're just so free and gorgeous through dancing together," she says. Check out those swoon-worthy twirling lifts toward the end.

There's some real gymnastics in the rip-roaring choreography by Michael Kidd in the 1954 film, "Seven Brides for Seven Brothers." The big dance in the barn — with guys competing for the gals — is a showstopper. Moore loves that this dance story is told without lyrics. "These days, we're so used to being spoon-fed what we're supposed to feel," she says. Check out that guy on the spinning log, not to mention what can best be described as a balance beam routine that includes arm-wrestling.

Dancin' in the rain

Of course, Kelly's rain-drenched virtuoso performance in the title song of "Singin' in the Rain" (1952) is a wonder — especially when you consider that, according to movie lore, he had a bad cold and fever. Then there are Donald O'Connor's athletics — including wall-climbing somersaults — in "Make 'Em Laugh." But let's consider the recently departed Debbie Reynolds, who at age 19 had no dance training, and somehow held her own, expertly tapping away with Kelly and O'Connor in the joyous "Good Morning" — which she has said made her feet bleed.

Mambo in the gym

There's no debating the brilliance of Jerome Robbins' choreography for "West Side Story" (1961). But which dance scene gets top billing? For Moore, it's that opening with the Jets and Sharks and those snapping fingers. "You just do that snap and a little jump and everybody instantly knows it's 'West Side Story,'" she says. For Perron, it's the Mambo dance at the gym, where Maria (Natalie Wood) and Tony (Richard Beymer) fall in love. Especially that cinematic moment "when all the others blur out, and Tony and Maria come into focus, and it's just an amazing falling-in-love moment. The music slows down, and there's an inevitability about their coming together and ignoring the whole world."

The magic of Mikhail

You can dispute the overall quality of the 1985 "White Nights," but here's one thing you can't dispute: the dancing prowess of Mikhail Baryshnikov and Gregory Hines. The two, who both play defectors (it's complicated), have silly dialogue but compelling dancing, together and apart. And, if you only have 2 minutes on your hands, search for "Baryshnikov" and "11 pirouettes." For 11 rubles, he does what is really one single pirouette with 11 revolutions — perfectly. In street clothes.

They're doing a high-profile "Mary Poppins" sequel, but for many it will be hard to match some of the memories of the 1964 original, like Julie Andrews and Dick Van Dyke dancing in "Step in Time" — that joyful chimney sweep scene on the London rooftops. "It takes the dirty, sooty experience of working on chimneys and makes it magical," says Perron.

You gotta hand it to John Travolta, who's provided more than his share of lasting dance memories. First there was "Saturday Night Fever" (1977), where the actor earned big-screen fame as Tony Manero, king of the disco floor and champion of the strut. Only a year later he tore up the gym floor in "Grease," co-starring Olivia Newton-John. And in 1994, there was that understated — but unforgettable — twist contest with Uma Thurman in "Pulp Fiction."

You know, that lift

No one leaves Baby off a list. Before Emma Stone and Ryan Gosling did "La La Land," they did "Crazy, Stupid, Love," (2011) in which they recreated the famous "Dirty Dancing" lift made famous by Patrick Swayze and Jennifer Grey in 1977. You know the one. Enough said.

A storm of dancing

If you watch one dance clip, let it be this: the Nicholas Brothers, Fayard and Harold, in their have-to-see-it-to-believe-it performance in "Stormy Weather" (1943). It's not just that the brothers, who overcame racial hurdles to earn fame for their astounding talent, tap and twirl and jump onto tables; they jump into full splits, too, in moves that look like they would be horribly painful. At the end, they leapfrog over each other down a staircase, landing in splits each time. And then they get up and smile.