Donald Trump's idiot box anger addiction: The country's a disaster and the world is a mess? That's TV talking

TV can be part of a healthy media diet, but Trump's steady stream of Fox News could be keeping him wound up 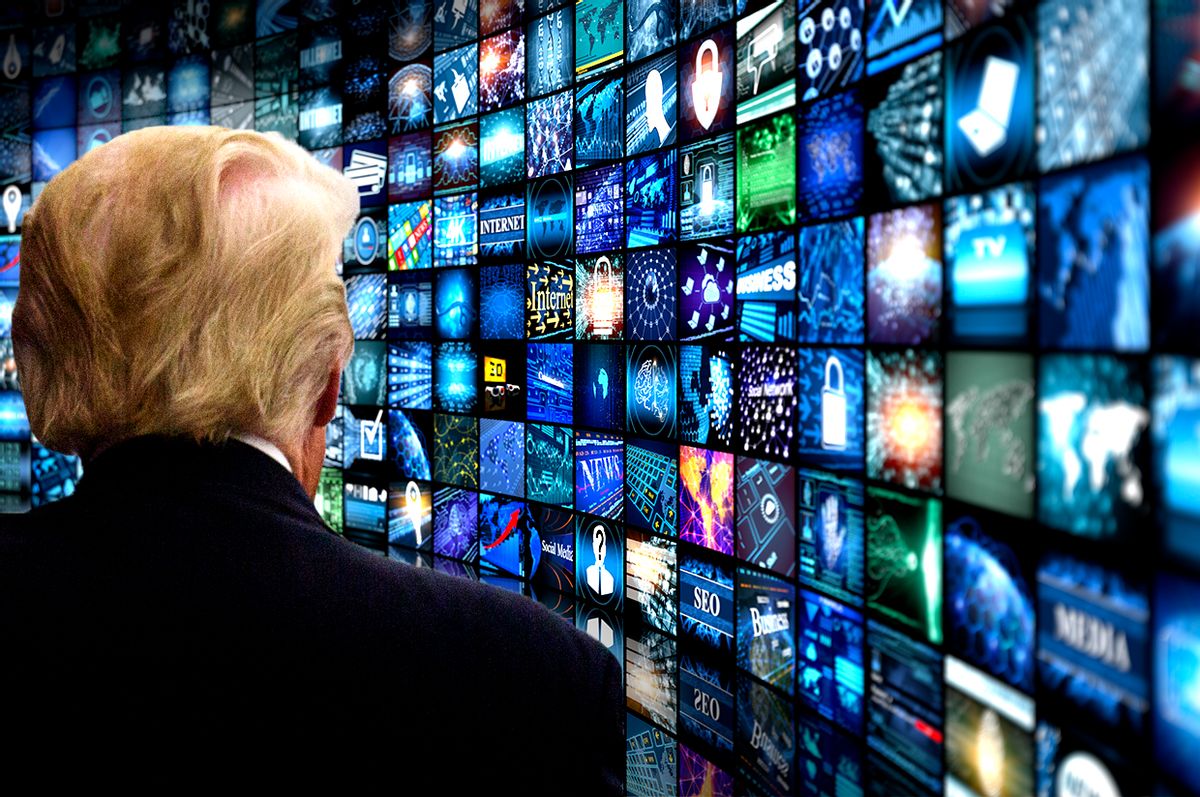 Much of what President Donald Trump says about the state of the world is wildly inaccurate, dangerously manipulative and embarrassingly paranoid. Seasoned political observers and commentators react to his steady stream of nonsense with reasonable suspicion that he is lying to them. Certainly, no one could actually believe that the world is a “mess” and a “disaster,” when rates of war, violence and military conflict are at near historic lows. The president, with access to the best information in the entire world, could not actually think that America is “one giant crime scene” when violent and property crime are at their lowest rates since the 1960s. What but dishonesty could account for his claim that undocumented immigrants are pouring over the American border like “nothing we’ve ever seen before,” when statistics and studies demonstrate that net illegal immigration from Mexico, over the past five years, is zero?

Inimai Chettiar, director of the Justice Program at the Brennan Center of NYU Law School, recently wrote about Trump’s distorted and deceptive depiction of the world under the Daily Beast headline, “To Sell Himself, Trump Relies on His Big ‘American Carnage’ Lie.” If Chettiar is correct in the assessment that Trump is willfully scaring the already cowardly American people to advance his agenda, then it is largely business as usual. Fear as a tool of manipulation is dependable, and cynics such as Joseph McCarthy, and his close friend and defender Richard Nixon, effectively used it to build their entire political careers.

There exists a worse possibility as far as Trump is concerned. It is equally likely that he believes everything he is saying. Sincerity poses a much greater threat than mendacity, because if Trump is actually as frightened and on edge as he appears, he could escalate a minor crisis into a major international dispute, or overreact to a small problem, creating consequences of catastrophic proportions.

It is beyond dispute that Donald Trump has almost no interest in reading. He told the Washington Post that he has “no time” for literary pursuits. He also said that when he receives reports, he prefers the key information to appear in bullet points so that he can “handle it in a page.” Trump is also skeptical of computers, and former supporter Mark Cuban claims that in a private conversation, Trump admitted that he does not ever use a search engine to obtain information.

Trump does watch copious amounts of television. Obsessed with cable news, ratings and the performance of talk show hosts, the former reality TV star seems to suffer from televisual hypnosis. He cannot turn away from the screen, even while he oversees the awesome power of the federal government and United States military. Journalists have already made it clear that Trump often repeats what talking heads say on the nightly news, lifting their phrases for his own Twitter feed.

The President’s media habits are important, because studies consistently show that television viewers are less informed, and often more misinformed, than those who learn the news through print sources. It is necessary to add that Trump’s favorite network is Fox News. In his recent press conference, he denounced CNN, CBS, and NBC as “fake news,” but praised the hosts of Fox and Friends, the Fox morning show, as “honorable people.” Many of Trump’s tweets are endorsements of Fox News reports. The most hilarious example of the Fox effect on Trump is his recent incoherence over “what happened, last night, in Sweden,” when no incident of significance took place in that country. Trump offered the sad clarification that he was referring to a segment on the Tucker Carlson show about a supposed increase in crime from immigrants in Sweden.

“Sweden! Who would believe it?” Trump shouted to the audience at a bizarre rally, not long after the First Lady opened with a robotic recitation of the Lord’s Prayer. The answer is viewers of Fox News. Fairleigh Dickinson University conducted a survey on knowledge of current events and media habits, and the results indicated that Fox viewers know less about the world than apathetic Americans who consume no news. As far as awareness and comprehension is concerned, it is better to read and hear nothing than to feast on a steady diet of lies.

Television still operates according to the “if it bleeds, it leads” cliché, often leading the audience to believe that the world perpetually hangs over the edge of Armageddon. In "The Culture of Fear," sociologist Barry Glassner documents and describes how, throughout the 1990s, Americans who regularly watched television believed that crime, teen pregnancy, and drug addiction were on the rise, child abductions were an epidemic, and road rage threatened every commuter. Reality, as it is typically uncooperative with paranoia and hysteria, proved that teen pregnancy, crime, and drug use were in decline, child abductions were relatively rare, and that the extent of road rage was limited to a few alarming anecdotes.

Knowledge of history, especially when acquired through reading, imbues the individual with a contextual understanding of contemporary crisis and debate. While humanity will alway struggle with injustice, violence and exploitation, the progression of interpersonal and political development has led to borderline miraculous achievements of increased freedom, health and wealth around the globe. Literacy and democracy have steadily improved over the past 30 years, while extreme poverty has significantly decreased. Outside of heartbreaking pockets of terrorism and trauma, such as Syria, the world currently is a state of peace not seen in several decades. Contrary to the insipid ramblings of Trump, the world is not a wreck.

The President of the United States, it appears, does not live in the real world. He lives in the tiny world of illusion and delusion where Fox is the only reliable source of information, and perhaps, he actually perceives the planet as caught in the fire of widespread war, with terrorist attacks on every corner and violent criminals stalking every street.

The last time that most reasonable observers assumed that Trump was playing a masquerade game was during the Republican primary when he forcefully adopted far right positions on everything from immigration to abortion. His advocacy of birtherism is the most obvious and vomitous example of his reinvention. Before his rise in politics, Trump expressed relatively progressive views on social and cultural issues. Certainly, it was safe to assume that he adapted to the beastly electoral politics of the Republican Party, where bigotry and ignorance are exploited for votes.

It is also possible that Fox News hypnotized him, causing a genuine right wing mutation. Jen Senko made a deeply effectual and thoughtful documentary about her father’s transformation from moderate to political lunatic, "The Brainwashing of My Dad." Early in the documentary, she contrasts the father of her youth — a Kennedy voter who routinely gave money to homeless people — and the father of Limbaugh and O’Reilly’s diabolical invention: a man who became so enraged at his daughter’s objection to the term “feminazi” that he threatened to kick her out of the car.

"The Brainwashing of My Dad" reviews the genesis of right wing media. Roger Ailes was the mastermind who was not bashful about instructing colleagues that the purpose of media is to overwhelm the emotions of the viewer. The intellect, according to Ailes’ successful vision, should not play much of a role in the interaction between media and the consumer. Everything visible and audible on Fox — the graphics, the commentators, the camera angles, the language — is a calculated attempt to whip the audience into a frenzy of fear and anger.

Once it works on the viewer, it is similar to a drug. As neuroscientists and psychologists in "The Brainwashing of My Dad" explain, the expression of anger, even if it is only shouting at the television, tweeting at 2 a.m., or yelling at your daughter in the car, is a stress response. It releases endorphins in the brain, and because of the pleasure of such a release, it becomes addictive. The addict will constantly return to the source of anger for his fix.

Perhaps, anger addiction explains why Trump’s television fixation is so severe that it concerns White House staffers. It might account for why Trump feels he has no time to read, but he has countless hours to idle away watching Sean Hannity and Bill O’Reilly.

"The Brainwashing of My Dad" features short interviews with several ordinary people who feel that they have “lost” a loved one to right wing media. Facts and alternative arguments cannot penetrate the Fox addict’s aural wall of right wing noise. Discussions become impossible, and evidence is meaningless. The personal testimonies are powerful, because everyone can relate. We all have the crazy uncle across the table at Thanksgiving ranting about FEMA camps.

Your crazy uncle is now the most powerful man in the universe.