Real women are still expected to cook: From sitcoms to the Food Network, the "angel in the kitchen" pressure on women prevails

TV has long fed cultural expectations about women and home cooking. "Worst Cooks" takes it from fiction to reality 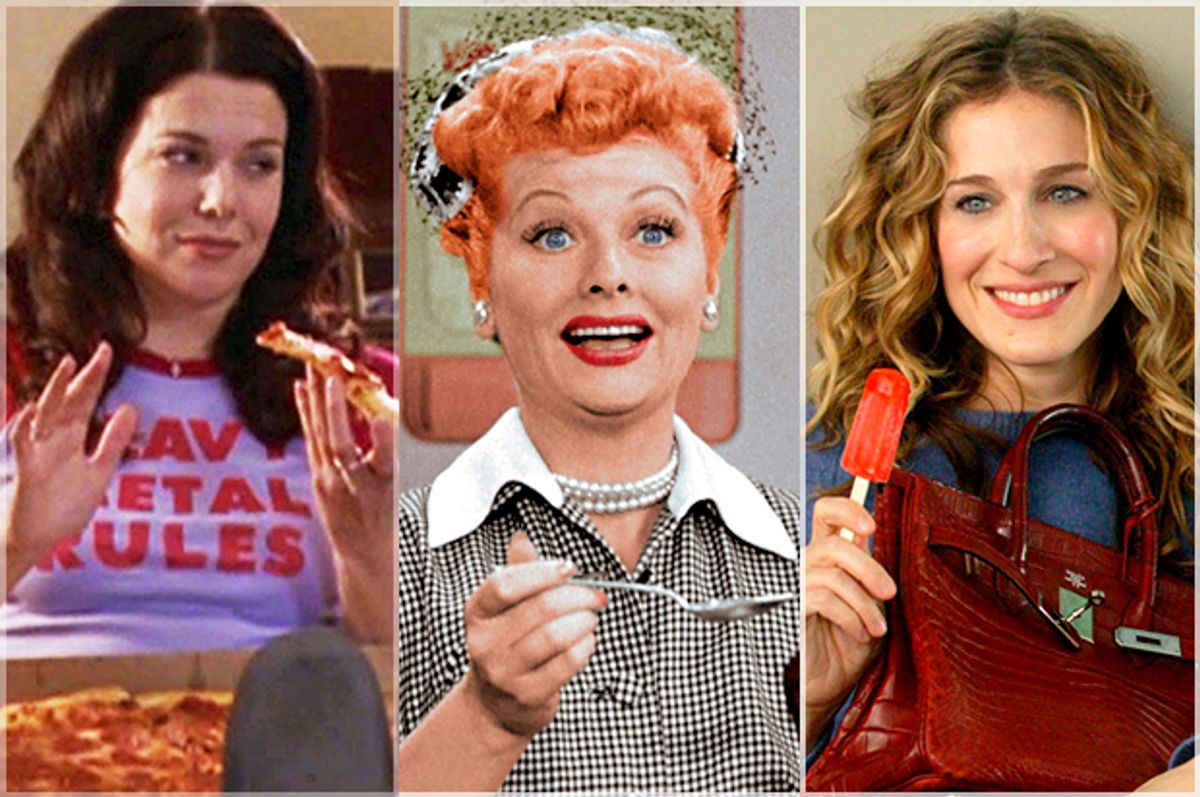 Dinner is served. Eighteen years ago, this straightforward statement introduced second season “Sex and the City” viewers to a Carrie Bradshaw who is absolutely, and proudly, useless in the kitchen. Following this declaration, which is made while wearing a slinky black dress, she throws a basket of torn bread chunks onto Mr. Big’s (Chris Noth) kitchen counter. We’re talking generous, stale-looking pieces that one might toss, in a similar fashion, into a pond of ducks.

Carrie (Sarah Jessica Parker) says fondue is the only dish she has mastered, as she punctures a bite of sourdough with a fork and dips it into a small pot of melted cheese. Big, who looks strangled enough by his awkward black turtleneck, chokes it down. Carrie tastes and agrees it’s horrible.

They laugh it off and agree to go to a restaurant instead, leaving behind a coagulating pool of orange fondue and an uncorked bottle of red wine.

She can’t cook and she doesn’t care.

The inept female home cook is a common trope on television — from Lucy Ricardo to Lorelai Gilmore. It’s one that has signaled both societal shifts and stagnations in how we view traditional femininity throughout the decades and recently has made it even onto reality food TV.

Emily Contois is a doctoral candidate in American studies at Brown University, where she explores the connections between food, nutrition and identity in the everyday American experience and popular culture. Her dissertation, titled “The Dudification of Diet: Food Masculinities in Twenty-First-Century America,” examines how media representations of food, cooking and dieting construct and negotiate masculinity in our current culture.

She said that even though it is a Victorian relic, the connection between femininity, food and food labor, like cooking, remains strong.

“In many ways, cooking continues to be viewed as part of ‘successful’ femininity. The idea that ‘real’ women cook — and cook well — is still a dominant social convention, even as we’ve seen significant social and demographic shifts,” Contois said. “Media, like scripted TV, both shape and reflect these social trends in that they repeat and reinforce these rather antiquated ideas about gender and food.”

If a woman cooks passably well on television, it’s probably not going to end up as a pivotal point in an episode or a series because it is simply expected. In other words, compare June Cleaver with Lucy Ricardo. One serves Sunday supper with no fanfare; the other is cornered in her kitchen by a gigantic loaf of bread baked with too much yeast.

For that reason, it’s interesting to note the context of the Lucy versus the mammoth breadstick scene. It appears in the 1951 season 1 episode called “Pioneer Women,” in which Lucy (Lucille Ball) and Ethel (Vivian Vance) stage a revolt over their domestic duties and beg their husbands for modern conveniences like dishwashers — or in Ethel’s case, a pair of rubber gloves.

Ricky (Desi Arnaz) and Fred (William Frawley) bet they can survive longer than “the girls” without using anything invented after 1900, including electricity.

Lucy’s discontentment in this episode is part of a greater theme present in the series. She wants to be in the show, too; she wants an identity separate from her role as a homemaker. It’s a constant endeavor that always ends with a laugh.

In the book “Women Watching Television: Gender, Class, and Generation in the American Television Experience,” Andrea Press separates television eras into prefeminist, feminist and postfeminist. Lucy Ricardo would be classified as a prefeminist character, one whose identity and femininity are tied to her value as a homemaker.

Despite the fact that Ball pushes some definite gender boundaries when it comes to her use of physical comedy and vocal resistance to the restraints Ricky places on her daily routine, Press framed Lucy’s comedic failures at the end of each episode — like the badly baked bread — as a process of “domestication,” whereby Ricky welcomes her back, with open arms, into her rightful place. (Keep in mind: This was the 1950s.)

This intertwines with an idea that Contois said is also common in the TV portrayal of female home cooks.

“Another theme to consider is the idea of  ‘food is love’ — that cooking for others, feeding others, is a culturally salient way that women in the role of mother, wife, daughter, etcetera, are expected to show love and affection,” she said.

Perhaps my favorite example of this theme comes from the 1970s series “Little House on the Prairie.”

In the sixth season episode “Back to School: Part 2,” the dashing Almanzo Wilder (Dean Butler) has recently moved into town, and both the independent Laura Ingalls (Melissa Gilbert) and her rival, mean-spirited Nellie Olesen (Alison Arngrim), vie for his attention.

With some help from her overbearing mother, Harriet (Katherine MacGregor), Nellie seemingly gets ahead by inviting Almanzo to their family restaurant for dinner. (Remember: As Harriet says, the way to a man’s heart is through his stomach.)

But here’s where things get interesting: Neither Harriet nor Nellie can cook.

In fact, Laura’s mother, Caroline (Karen Grassle) — occasionally lauded as a great cook throughout the series — is actually the chef at the restaurant. Harriet just assumes she could slip Caroline a little extra cash to make a dinner for which Nellie could take credit (the prairie days' version of sliding takeout onto a real plate for a date). But Caroline refuses to work on the “Lord’s day.” Laura chimes in, saying she would be glad to do the Lord’s work by helping a friend and offers to pre-make some cinnamon chicken, Almanzo’s favorite.

Laura, who apparently has inherited some level of cooking prowess from her mother, makes a good show of it — but ultimately swaps out the cinnamon for an obscene amount of cayenne pepper, effectively sabotaging date night.

While Almanzo and Nellie spend the next few minutes coughing up a lung and wiping their eyes, there’s a not-so-subtle message underpinning the situation: Nellie is not wife material at all.

Fast-forward, though, into the late '90s through today. We’re looking again at our Carrie Bradshaws and Lorelai Gilmores — women who, with their lackluster cooking skills and resistance to recipes, occupy spaces of feminism (or, according to Press, postfeminism), however flawed.

Postfeminism, Press explained, is characterized by "a clear and constant undercutting of the ideals and visions of liberal feminism, which stressed the need for women to achieve equality with men in the workplace, the home, and the bedroom.”

She wrote, “On postfeminist television, women’s family role is normally emphasized; or if it is not, this narrative fact commands a great deal of attention on the show.” Again, the fact that Carrie can’t cook and chooses not to do so is a theme mentioned over and over throughout the series and her various on-screen relationships. Despite Carrie having some modern attitudes toward sexuality and gender roles, this is a trait ostensibly included to make viewers consider her worth as a partner. We see a similar line of writing in “Gilmore Girls” regarding Lorelai’s role as a mother.

“So, yes, presenting a female TV character as a ‘bad cook’ definitely shapes that character’s gender identity and how it does or does not achieve social ideals,” Contois said. “These depictions aren’t always negative, but they are often ambivalent.”

And these depictions have now reached reality food television, perhaps most notably on Food Network’s “Worst Cooks in America.” The premise of the show is pretty simple. Two heralded celebrity chefs — this season it’s Rachael Ray and Anne Burrell — take on the task of transforming useless home cooks into seasoned semipros.

“I’ll say that ‘Worst Cooks’ fits into almost a two-decade tradition at Food Network of an underlying theme that anybody should be able to cook,” said Allen Salkin, author of the 2013 book “From Scratch,” which delves into the history of the Food Network.

And now it’s a theme that's being amped up for modern reality TV audiences by featuring particularly inept contestants, both male and female. While the show may strike some as inane or mildly exploitative, Salkin said it’s important to remember that the job of Food Network is not to educate people about food or improve the way Americans eat.

“Rather, the business of Food Network is to sell you toothpaste and Acuras and every consumer product that pays for advertising,” Salkin said. “So all the network cares about is eyeballs.”

What viewers see is common tropes surrounding women in the kitchen. In the one-on-one camera interviews this season, each contestant gives a reason why he or she would like to become a better cook.

One contestant named Brittany moans, “How am I going to get a husband if I don’t know how to cook? I wanna cook for my boo.” Another named Mandy shows a photo of her 19-month-old daughter, Ryland. “Everything I serve Ryland is prepackaged and premade,” she says, a fact that Mandy is not proud of.

According to Contois, advertisers know the angst surrounding cooking and food is a weak spot for many women.

“Katherine Parkin writes about how food advertisers exploited this idea for decades, particularly in making women feel deeply guilty about whether they were cooking for their families,” she said. “And if convenience food products ‘counted’ as cooking — and as love.”

And therein lies one of the major distinctions between the answers given by the male and female “Worst Cooks” contestants. Overwhelmingly, the men want to learn to cook for themselves (save for a dad or two in the group), whereas the women wish to learn to cook real food for their current or prospective loved ones.

On “Worst Cooks,” we hear stories of real women who are useless in the kitchen but who want to improve for the sake of their children, love life or reputations as functioning adults — stories that so clearly mimic themes which, as Contois said, have been repeated and reinforced through years of television. It’s a weekly reminder that while we might be in a new decade, sometimes we’re still tied to old narratives.