Art and food to blow your mind: Where the Ferran Adriàs of the culinary world meet Salvador Dalí 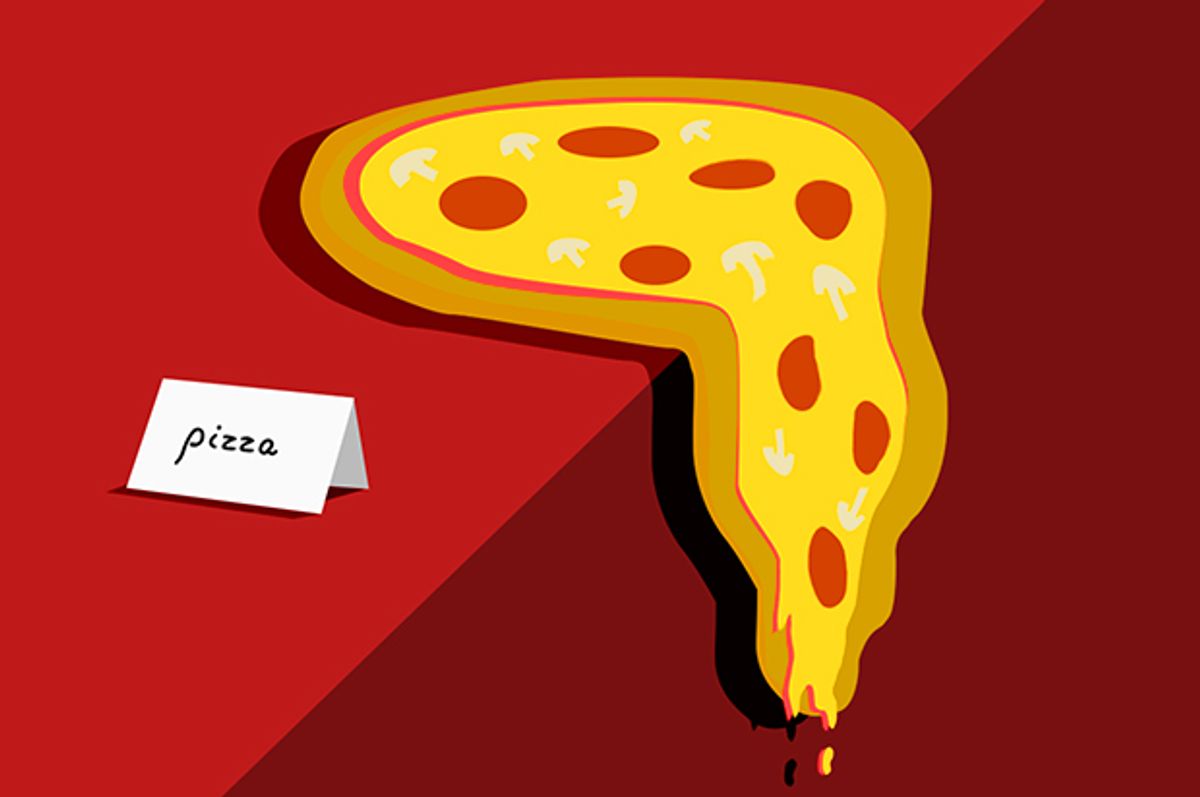 Paying a hefty sum for a plate of food prepared to look like dirt sounds pretty weird. You consume what your senses warn you is distasteful, but which your logic overpowers (you’re at a fancy restaurant, you think, and surely they would not serve me actual dirt), followed by the realization that what you half expect to be repulsive happens to be wonderfully delicious. Surreal, right? The dish, entitled — as if it were a piece of fine art — “Edible Earth,” was long a feature on the menu at Noma, a regular among the top restaurants in the world, and the domain of chef/demigod Rene Redzepi.

A few months back, Taschen published an out-of-print 1976 cookbook by the renegade prince of Surrealism, Salvador Dalí. Entitled "Les Diners de Gala," it includes recipes that one can indeed eat, though whether you’d like to, or are willing to go to the effort to prepare them, is another, far more personal, matter. According to the artist, these were true dishes that his wife Gala cooked, and which he dubbed with wonky titles like “Conger Eel of the Rising Sun.” Chapters are similarly titled with brain-scratchers: the section on vegetables is called “Deoxyribonucleic Atavism” while the meat chapter runs under the heading “Prime Lilliputian Malaises.” You can fire up some “Frog Pasties” or “Thousand-Year-Old Eggs” (which one figures must be ten times better than the traditional “Century Eggs” that feature in Chinese cooking). Such odd concepts are perhaps unsurprising from an artist who has brought us "Lobster Telephone," who once gave a formal lecture dressed in a 19th-century deep diver’s suit and whose affinity for the edible was already evident, as he designed the enduring daisy-shaped logo for Chupa Chups lollipops.

But nothing in Dalí's cookbook sounds all that outlandish when compared to the menus of today’s top chefs. As an art historian, I recognize a healthy dose of what makes Surrealist art successful lurking on the plates of the Michelin three-star restaurants of our day. When Heston Blumenthal serves up “Snail Porridge” or “Bacon and Eggs Ice Cream,” or when Ferran Adrià offers “Liquid Mango Ravioli,” it’s not a far step removed from Dalí's paintings, like “Amalgam — Sometimes I Spit on the Portrait of My Mother for the Fun of It” or “Symbiotic Woman-Animal” or “Andre Breton, the Great Anteater” (this one could easily be a dish on the menu of Alex Atala, a chef who painted ants with gold leaf to make them feel like a high-end consumable). And the sensation of experiencing Surrealist painting and certain surreal dishes, both of which are designed to explode your mind, is nearly identical.

The idea came to me while interviewing about a dozen of the world’s most famous chefs and food critics, for an article in the Village Voice on whether great chefs should also be considered great artists. In correspondence with Adrià, the Jupiter of three-star chefs, I saw numerous parallels between his creations and those of his fellow Catalan, Dalí.

Of course, I’m not the first to draw parallels between art movements and Adrià's food.

“El Bulli’s cuisine has been associated with certain movements in the history of art," said Adrià. "With Cubism, for example, when talking about our deconstructive style, or with Pop Art, by our referring to popular culture through elements of our cuisine. Also with conceptual art, by our appeal to the concept as an important element of our gastronomic offering.”

But while the aesthetic and concept of various dishes can be linked to art styles, it is the overall experience, one that is meant to make you rethink obvious assumptions and prompt you to step away from your quotidian mentality and rhythms, that really links a certain trend in high-end cooking with Surrealism.

In short, both are meant to blow your mind.

Take Grant Achatz’s restaurant Alinea. (If you, like me, have not actually eaten there, watch the episode of the amazing Netflix series "Chef’s Table" to get a sense of it.) The experience begins with guests entering what looks like a townhouse, moving from the bright street into a dark-walled interior with dim lights. During one period, the floor of this indoor entryway was lined with real grass, which staff periodically watered. The message is clear: Leave your day behind you, and step into a dream world. You are then guided through a series of tasks that involve consuming delicious things, but in ways you never thought possible: slurping roe and herbs through a tube of ice, eating shellfish off a piece of driftwood draped in seaweed, nibbling off a long wire that pierces a slice of ham and squid tentacles. Dalí would be delighted.

Adrià agrees that Surrealism offers a parallel. “As for Surrealism, there may be elements in common, but I believe that both in this case, and the others I mentioned, these are interpretations or parallels that are made from the world of art," he said. "I think our cuisine is generated radically, but from within the history of gastronomy. This does not mean that I am not interested in art, like so many cultural manifestations. I have learned a great deal from the world of art concerning, for example, creative freedom.”

He has a point — it may be for the audience and the critic to draw connections and see links. For a chef like Adrià, he is simply riffing off of, and expanding the history of, his own art form: gastronomy.

Besides both hailing from Catalonia, Adrià admires Dalí, but doesn’t see a particular affinity with him, but rather with some other artists. “I really enjoy Dalí’s work. I consider him one of the great painters of the 20th century. I have always been interested in his way of thinking. I couldn’t say if I do have any affinity with him. I think I identify more with Picasso, Miro, Duchamp, or [Richard] Hamilton’s way of working.”

But it is the mindset, and the goal, of Surrealism, as articulated by André Breton in manifestos in 1924 and 1929, but perhaps best expressed in the writings and art of my personal favorite painter, René Magritte, that really binds what we might call “mind-melt cooking” and Surrealism. For Magritte, Surrealism was a chance to pull people out of their humdrum, everyday lives, which risk falling into a numbing rhythm of wake-brush teeth-commute-work-commute-TV-brush teeth-bed and repeat. This was the lot of the middle-class suburban white-collar worker, the anonymous businessman in the bowler hat so closely associated with Magritte’s work. To Magritte, this was a sort of living death, an army of identically-dressed zombies lashed to their grayscale routine. Art was a chance to punch a hole in this sort of life, to color it bright, to let in fresh air. To do so, he tried to provoke a sense of mystery, one that wanted solving, but which was impossible to solve: a maze with no end, a riddle with no answer, a cryptogram with no key. Injecting wonder was the goal, and to do this, Magritte drew in his audience with familiar components (figurative, realistic painting) but arranged with what’s-wrong-with-this-picture aspects, like a steam train emerging from a fireplace, or a man facing a mirror while the mirror reflects the back of his head. Your brain tells you that this is the sort of “normal” image you are used to processing, but an element of it doesn’t jibe with anything “normal,” and your brain has a lovely sort of mini-meltdown, like the molten center that oozes out of a chocolate soufflé. It’s art that’s meant to make your mind go “What the hell?” That state of confusion is mildly, pleasurably unsettling.

Dalí’s approach was similar, but he was more interested in transferring dreams and the subconscious into art, drawing from a well filled with Freud and the Marquis de Sade and accented with LSD. But the goal was the same: Force confusion, get the mind to try to “figure it out,” invite interpretation but intentionally resist a conclusive one. Why did Dalí design a telephone in the shape of a lobster? There is not meant to be a hidden meaning in the choice of lobster. It’s just weird and mind-blowing, to think of holding a lobster up to your ear to call Aunty Betty. There is no particular symbolism to Dalí’s giving a speech in a diving suit (though he did open with a bad joke about “plumbing the depths”) — it’s just wonderfully weird.

Dalí and Magritte also liked the idea that all they could do was offer something bizarre, serve up a painting as a medium between themselves and the audience. How it was accepted or internalized was up to the viewer. Adrià feels the same way about his food. “I do obviously have an idea of what a dish can produce in a diner’s mind and senses," he said, whether the diner in question is a critic or not. "But once it goes out of the kitchen and comes into contact with other people, it is impossible to control the reaction, the interactions that will happen as a dialogue between the cook and the guest, through the medium of the dish.”

Whereas Surrealist painters worked with ingredients (pigment, canvas) and basic components (realistic painting styles) to build their finished works, chefs are armed with a parallel arsenal. The ingredients are not so unusual, bar some of the molecular components: Vegetables, meat, fish, fruit and starches are the core from which they build, and the basic units must comprise edible meals. If an artwork is not skillfully done and beautiful, then it is hard to consider it successful, just as a dish cannot be considered a success unless it looks nice and, most importantly, tastes delicious. No one will laud a chef who asks them to pay for a plate of dirt, if it actually tastes like dirt.

That is where Adrià, and his iconic El Bulli dishes, shone. They were beautiful, they were delicious, and they were pleasant mind-melts. Consider “Liquid Olive.” It is carefully constructed to look like a normal olive. It tastes like the best, most concentrated ball of olive-ness you could ever imagine, but it is actually a jiggly globule, “spherified.” It forces a clash between senses, expectations and logic. “Iranian Caviar” looks like bright-orange sturgeon eggs, and is served in a caviar container, but each tiny, gorgeous globe is made of passion fruit, so the explosion in your mouth is not salty, but sweet. Expectation inverted, wonder inserted. We marvel at the skill of transforming the shape and consistency of one food into that of another, an illusionist’s trick. Dalí would have been delighted to eat at El Bulli, particularly the striking “Coral” made from chocolate covered in raspberry powder, photographs of which look like Dalí paintings.

El Bulli’s “Pipeta de Gamba en Sashimi y Su Cabeza Caramelizata,” a skewer of shrimp with its raw body impaled in the middle of a transparent eyedropper loaded with sauce, while the caramelized head perches at its point, could easily be the work of Dalí. Though Dalí would probably turn it into a smartphone stylus.