Should the U.S. maintain its alliance with Saudi Arabia? Unfortunately, we're stuck with them 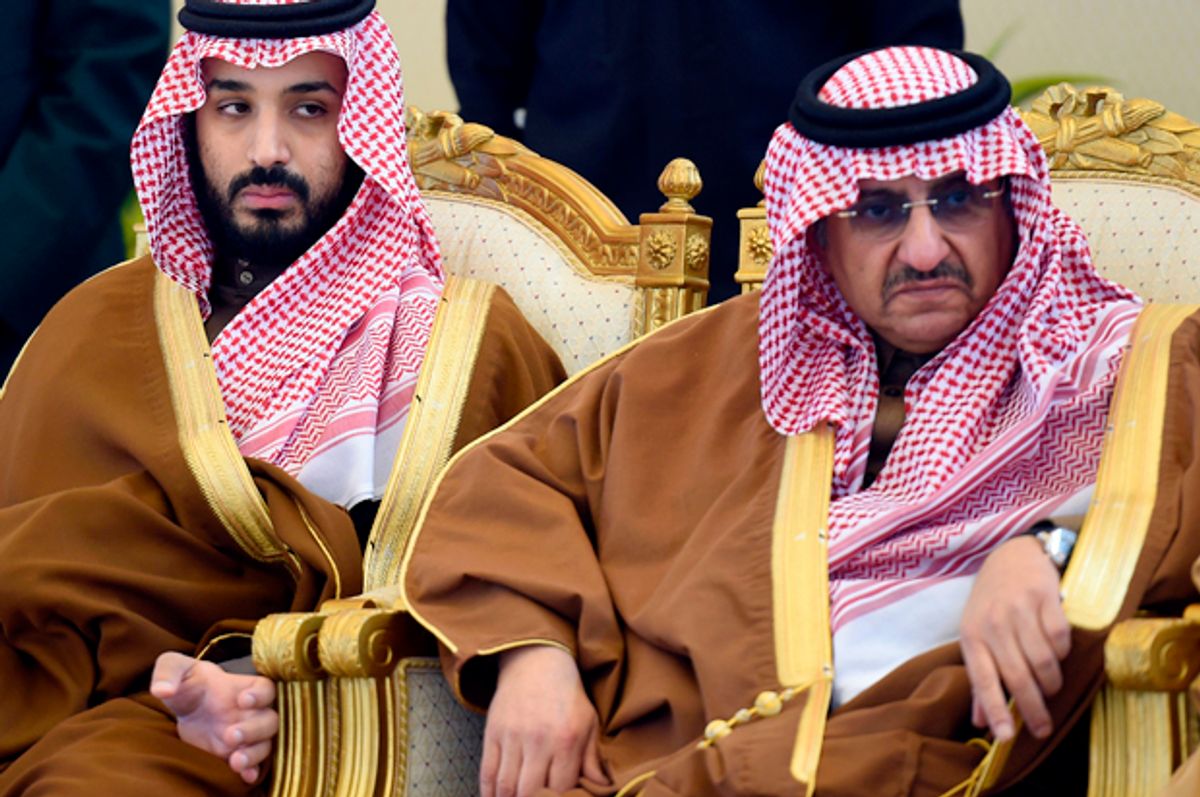 In late January, Saudi Arabia’s King Salman bin Abdulaziz Al Saud and his son, Deputy Crown Prince Mohammed bin Salman, who is also the minister of defense, celebrated the 50th anniversary of the opening of the King Faisal Air Academy. On the occasion, the Saudis reportedly added to their fleet of warplanes a number of brand new F-15SAs. The new planes are a variant of the Boeing-manufactured F-15 fighter jets and are part of a $29.4 billion deal signed in late 2011 that includes 84 new F-15SAs and an additional 68 of the F-15S variant that will be upgraded.

It was a big purchase, but the Saudis were not done. Since 2014, Riyadh has placed orders for another $30 billion worth of American weapons, the bulk of which were requisitioned after Saudi Arabia’s intervention in Yemen began in March 2015. The Saudis have also spent another $22 billion on weapons from the United Kingdom and France. The numbers are staggering, making the House of Saud the second largest importer of weapons in the world after India.

Recently, Intelligence Squared US hosted a debate on the motion that the special U.S.-Saudi relationship has outlived its usefulness. At the end of the discussion, which pitted two teams of two experts against each other, 56 percent of those in attendance were convinced that Saudi Arabia should remain a strategic ally. Based on weapons sales alone, Saudi Arabia is undoubtedly a strategic partner of -- and effectively a jobs program for -- the American defense industry. A more appropriate question for the event might have been, “Is Saudi Arabia a competent ally?”

A few years ago, the Saudis began rewriting their defense doctrine in response to what officials in Riyadh feared was a weakening American commitment to Saudi security. The Saudis had long expressed concerns to American interlocutors that with all the talk in Washington of “engagement” with Tehran going back to the George W. Bush era, the United States would seek to replace Saudi Arabia with Iran as its primary interlocutor in the Persian Gulf. The fact that former President Barack Obama did not support President Hosni Mubarak during Egypt’s January 2011 uprising, resisted direct American involvement in the conflict in Syria and mused out loud that the real threat to Saudi security was internal reinforced the idea in Riyadh that Washington was not just unreliable but had tilted in favor of Iran.

The Joint Comprehensive Plan of Action, also known as the Iran nuclear deal, was, for the Saudis and their allies in the Gulf, the logical conclusion of a pro-Iranian policy that Obama harbored from the time he entered office. The Saudi leadership came to the conclusion that if the United States was not willing to contain and roll back Iranian influence in the region, the Saudis would have to do it on their own.

This was a dramatic change for the Saudi leadership. For years, the Saudis believed they could count on the commitments that the U.S. had made to ensure Saudi Arabia’s security dating back to President Franklin D. Roosevelt. Those guarantees were, of course, directly related to the oil upon which the Saudis sat and American interest in a well-functioning Western (after the Cold War, global) capitalist order. The Saudis also contributed to their own security but not through military might, even though they have been buyers of American weapons systems for a long time. Instead they employed a policy of riyalpolitik in which the Saudis used the proceeds from oil exports to keep adversaries at bay and thereby ensure the security and stability of their country.

It didn't always work, which is why the relationship with the U.S. was so critical for the Saudi leadership. Perhaps the best example of this was the way in which the House of Saud helped bankroll Iraqi strongman Saddam Hussein’s war effort against Iran in the 1980s. That policy certainly weakened the Iranians, but then, when Saddam invaded Kuwait in 1990 and threatened Saudi Arabia, the U.S. cavalry came to the rescue. Bulking up on weapons and rewriting doctrine was a way for the Saudis to demonstrate resolve and regional leadership and, more importantly, diminish their dependence on the United States. It started out pretty well. In the spring of 2011, the Saudis and the Emiratis deployed 1,500 troops to Bahrain both in solidarity with the country’s ruling family, which was confronting a destabilizing uprising, and as a show of force for the benefit of the Iranians, who the Saudis were convinced had a hand in the Bahraini unrest.

The Saudi foray into neighboring Bahrain was, from their perspective, a success. Bahrain’s King Hamad bin Isa Al Khalifa did not fall and the country did not come under Iranian influence. It was also the last time the Saudis achieved their foreign policy goals. For years the Saudis and Iranians competed in Lebanon, though Tehran and its client, Hezbollah, were always stronger than Riyadh’s allies. Still, as the Iranians were drawn ever deeper into the Syrian conflict, the Saudis made a big push to seize the initiative in Lebanon.

In December 2013, the Saudis announced they were investing $3 billion to re-equip the Lebanese Armed Forces, in an obvious effort to transform Lebanon's military into a credible counterforce to Hezbollah. It did not work out that way. In early 2016, the Saudis voided their commitment because of Lebanon’s failure to condemn attacks on Saudi Arabia’s embassy in Tehran — a function of the fact that the influence of pro-Saudi Lebanese political figures has diminished, despite Riyadh’s best efforts.

In Syria, the Saudis were not as vocal as the Turks or as visible as the Qataris in the anti–Bashar al-Assad coalition, but they nevertheless played a critical role in trying to bring down the Syrian regime. Beginning in 2012, Prince Bandar bin Sultan — the longtime Saudi ambassador in Washington — reportedly oversaw an effort to provide money and weapons to Syrian rebels via Croatia and Jordan. It is not entirely clear when that program ended — the Jordanians were not happy with it -- or who the direct beneficiaries of this largesse were, given the constantly evolving nature of the groups fighting in Syria. Despite their pretensions to lead the region against the predatory policies of the Iranians, the Saudis have been unable to shape events in their favor. At the moment, it seems likely that Assad will hang on in Syria, which will be a significant strategic victory for Tehran.

And then there's Yemen. The Saudis intervened in Yemen in March 2015 after Houthi tribesmen ran the government of President Abed Rabbo Mansur Hadi out of the capital, Sanaa. The Saudis saw the conflict next door as they see everything else in the region -- through the prism of their struggle with the Iranians. Determined not to allow the “Hezbollah-ization” of Yemen, the destabilization of the Arabian Peninsula and the expansion of Iran’s influence in their backyard, the Saudi military — primarily the air force and its F-15s — got into the fight.

An estimated $200 billion later (Riyadh has been typically opaque about its expenditures), the Saudis have little to show for their efforts. Their intervention in Yemen almost certainly accelerated the developments they feared most. The Houthis have drawn ever closer to the Iranians and, as the quagmire drags on, the conflict has the potential to undermine Saudi Arabia’s security.

No one should be surprised by the Saudi performance in Yemen. They have been having their butts handed to them by the Houthis since the 1930s. Before the military operation in 2015, the Saudis threw ground forces into a fight against the Houthis in 2009. It was a brief skirmish, but the Saudis had to beat a retreat and decided instead that they would try to pay off their antagonists. Riyadh’s current partners in the Yemen effort — primarily the Emiratis — share Saudi Arabia’s concerns about the expansion of Iranian influence on the western side of the Arabian Gulf. But they are also in Yemen because they fear the Saudis might lose the fight without them.

It is important to underscore the human cost of this misadventure in Yemen. The Saudis have been pounding the poorest country in the region for almost two years. The air campaign is not supposed to be indiscriminate, but it sure looks that way, which is why, in December 2016, the Obama administration decided not to move forward with the sale of air-dropped and precision-guided munitions to the Saudis. The Obama White House had previously suspended the delivery of cluster bombs to the Saudis over concerns about mounting civilian casualties, but Congress restored the deal. The Saudis have committed $10 billion for Yemen’s reconstruction, but this is a token amount given the scale of the humanitarian disaster for which Riyadh is responsible — a situation that has been all but lost in all the media coverage of Syrians and their struggles to survive.

Saudi Arabia’s experiment with a more active and aggressive military posture in the region is a failure. The Royal Saudi Arabian Armed Forces are just not competent enough to conduct complex military operations. This is why the recent Saudi announcement that it is willing to deploy ground forces to Syria should be met with derision. Even if this is only a gesture and a potential opportunity to plant a flag, no good is likely to come from it. The Saudis are simply no match for the other forces operating in the area.

Nor has Saudi Arabia fared much better when it has sought to shape the political environment in the region from Beirut to Cairo to Doha, encountering resistance and frustration at every turn. Yet the people at the Intelligence Squared US debate were quite right, but for the wrong reasons. It is not that the U.S. shouldn’t walk away from Saudi Arabia because it is a major oil producer and a partner in the fight against terrorism, or because the bilateral relationship has benefited Washington. The larger issue is that if Saudi Arabia is left to its own devices, it will sow more chaos in the Middle East. That is something no one needs.