Where do Democrats go from here? Look toward "Political Influencers" — who want them to stand up to Trump

Looking at the group we call Political Influencers, Democrats would do best to offer forceful, effective opposition 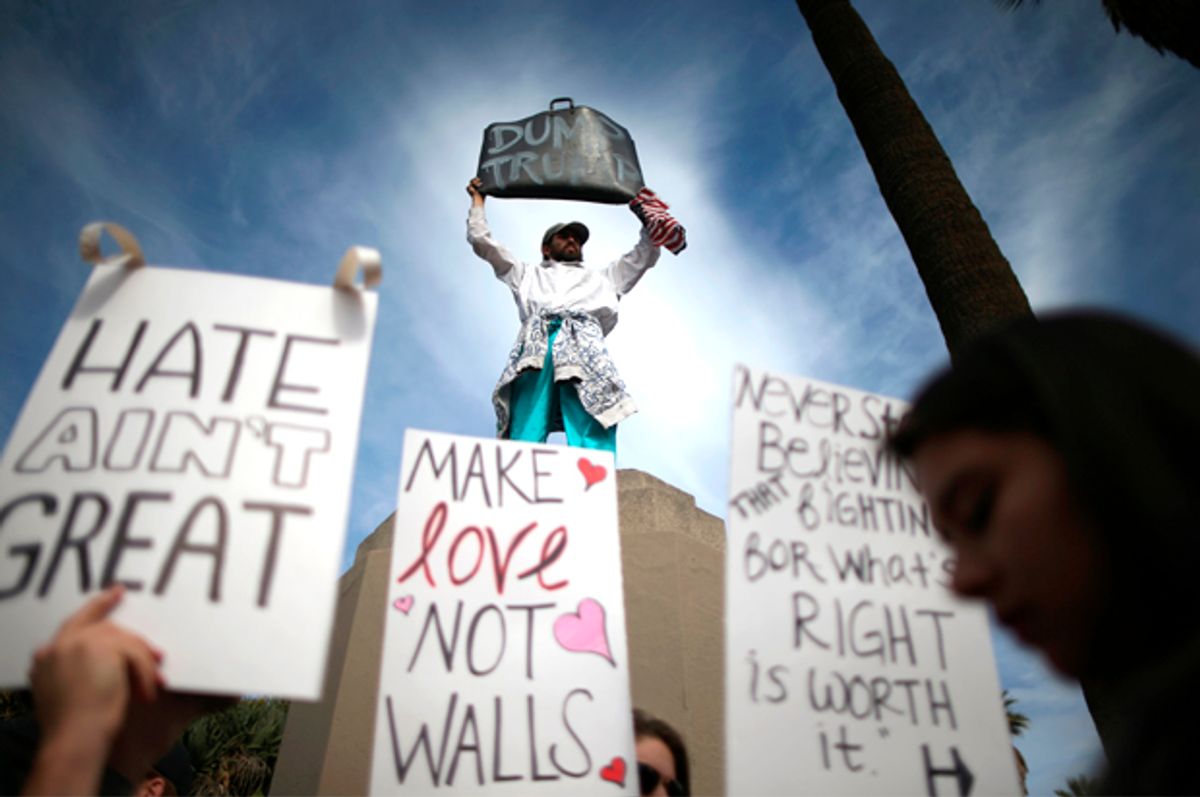 In the wake of Donald Trump’s election, the left side of the political spectrum has mobilized with a strength and fervor that few can remember. Protests against the administration’s actions have occurred daily, beginning with the Women’s March, a massive mobilization that involved more than one in every 100 Americans. The protests have already shifted the political landscape, with Senate Democrats voting en masse against Trump’s most controversial nominees, and even successfully derailing Andy Puzder, his pick for labor secretary.

But for this “resistance” -- as it’s been labeled -- to sustain itself in the months ahead and truly change politics, it must become a full-fledged movement. To better understand the possibilities for movement-building and explore its implications, we tried to quantify just how influential progressives are feeling today, and what they see as their path forward.

The survey was conducted among 988 respondents identified as “Political Influencers.” In short, Political Influencers are hyperactive partisans who exhibit a high level of activism. They are involved in a number of political activities, from more traditional approaches to influencing (i.e., voting or signing a petition) to more committed activities (i.e., participating in a local community group or taking part in a demonstration). As their name implies, Political Influencers are active and outgoing, and pride themselves on being well-informed and up to date. Enabling their influence, this audience likes talking about politics and current affairs with friends, and doesn’t shy away from expressing opinions.

Gleaning insight into the views of Political Influencers is particularly important because they have an inordinate amount of influence over whether or not movement-building is successful. Research has shown that the impact of an Influencer can be significant, and includes an ability to change behaviors or opinions in others. Basically: Political Influencers are movement-makers.

Far from agreeing with New York Times columnist David Brooks that protests are ineffectual, 97 percent of respondents believe that demonstrations “strongly” (68 percent) or “somewhat” (29 percent) help the cause(s) that are being advocated. Even more noteworthy, the protests and demonstrations that have taken place since the 2016 election appear to be awakening an audience that has previously shied away from such public displays of disapproval. In the past six months, slightly more than half (54 percent) of Political Influencers have taken part in a political protest or demonstration. Of those, only 7 percent say they had regularly participated in protests or demonstrations in the past, while nearly two in five (39 percent) say they had never participated in a protest before. Other research suggests a similar dynamic. A new Quinnipiac poll, for instance, found that nearly half (48 percent) of Democrats say they have become more politically active since the election; the same is true of only 28 percent of independents and 27 percent of Republicans.

Past movements have been successful in part because they’ve been able to harness power from those that don’t see themselves inherently as “protesters” or “activists.” In addition, other polling has shown that the Women’s March and other progressive actions are broadly popular among voters, which make them both more effective and harder for Republicans to ignore. Despite claims by Trump that the protesters are paid agitators, they have significantly more public support than he does.

To the benefit of progressive candidates in upcoming elections, Political Influencers also plan to be quite active in terms of political contributions to candidates and causes. Between now and the 2018 election, the mean amount respondents who plan to donate expect to contribute to candidates and causes is $749. Hearteningly, they are more likely to report targeting money toward state and local races than national races, though they are least likely to donate to state and local causes.

Democrats Have Their Vote, but Significant Party-Building Lies Ahead

Of those Political Influencers who express a vote preference in the 2018 midterm election, 98 percent plan to vote for a generic Democrat against a generic Republican. That said, these Influencers don’t currently have many good words for their party, which is seen by many as “disorganized,” “spineless,” “leaderless,” “weak” and “ineffective.” Even more troubling, a quarter believe the party will still be divided come November 2018.

Fundamentally, there exists a crisis of confidence among Political Influencers when it comes to their views of the Democratic National Committee. While majorities have confidence in state and local Democratic leaders and state parties, and to a lesser extent in Democratic members of the U.S. Senate and House, a majority don’t have confidence in the DNC to represent their interests. This lack of confidence is weighing on feelings toward the party. Only 31 percent of Influencers believe the party has strong leadership, and perhaps even more troublingly, only 37 percent believe the party is on a path toward victory. As to how the party positions itself moving forward, there is one thing all Influencers overwhelmingly agree on: The Democratic Party needs to stand up to Trump. Eighty-one percent of respondents “strongly” and 13 percent “somewhat” agree that Democrats should stand their ground against Trump, rather than compromising. Moving forward, the party needs to ensure these Influencers feel that it is speaking and acting in a way that reflects their own voices. The party standing its ground against Trump is the surest way to do so.

How Young Influencers are Shaking Up the Party

Moving forward, the party needs to both better understand and better address the unease of younger Influencers. Young Influencers were least likely to believe that voting is the most effective way to make a difference (only 56 percent of those under 30 vs. 71 percent of those 65 or older) and also the least likely to say they always vote (74 percent vs. 94 percent, respectively). Influencers young and old must embrace the importance of voting, and the party is an important messenger in that conversation.

Following the presidential election, there has been a lengthy debate about the tension between a progressive embrace of civil rights and an embrace of economic populism. Notably, few respondents worried that the Democrats were too focused on the interests of people of color (i.e., consumed by “identity politics”). Even more notably, young respondents were least likely to believe the party is too focused on speaking to communities of color. Fifty-five percent of those under 30 said that described Democrats “not well at all” compared to 38 percent of those 65 or older.

Though many have been quick to draw lessons from the Tea Party, it also provides a cautionary tale of ideological purity. The fixation on ideological purity in the Tea Party movement almost certainly cost Republicans seats in the Senate and sunk the "grand bargain," an agreement that favored their interests. Instead, President Obama got some of the tax increases he wanted later anyway, while Social Security and Medicare were spared from even modest cuts. Today, the extreme positions of the Tea Party imperil the Republican Party’s long-sought plan to repeal the Affordable Care Act.

We find that ideological purity may not be as much of a stumbling block on the left as it has remained for Republicans. Respondents were asked whether they would prefer making sure Democrats “espouse strong progressive values” or are “united in their opposition to President Trump.” Fully 62 percent of respondents choose the latter. Progressives would be wise to learn from the mistakes the Tea Party made in 2010, and avoid the temptation to let ideological purity supersede an ability to coalesce a winning majority -- united in opposition to Trump -- necessary to win back control of the House in 2018.

The strength and fervor of this resistance is real and has the potential to grow into a full-fledged political movement. These insights from Political Influencers suggest four key takeaways to watch moving forward:

1. There are signs that this effort is engaging people who haven’t been actively engaged in politics in the past.

It appears that resistance efforts are indeed drawing new blood into the “Influencer” circle, engaging progressives who haven’t always been as actively involved. Making sure these new Influencers feel like their voice is being heard will be critical. Equally important, there is a recognition among Political Influencers that for change to happen, it must be fought for at all levels of government, including at the state and local level.

2. Political Influencers play an important role in the strength and direction of the resistance effort moving forward. Right now, there is a crisis of confidence in the national party.

While Political Influencers are overwhelmingly planning to vote for and support Democrats heading into 2018, the party has some significant rebuilding ahead. These folks are motivated and taking action, but they don’t see identification with the party as a key way to ensure their voice is being heard. Moving forward, the party needs to ensure these Influencers feel it is speaking and acting in a way that reflects their own voices. Standing up against Trump is the surest way to do so.

3. Progressives need to avoid the missteps of the Tea Party, and right now, they are. But care must be taken to avoid the trap of ideological purity.

The Tea Party’s legislative success has been and remains muted, in part because of its insistence on ideological purity. While these findings suggest that ideological purity may not provide a similar challenge for the left, it is important to learn from the Tea Party's mistakes.

4. Democrats need to portray themselves as a party that’s willing to fight, and rely on their state and local counterparts to organize resistance efforts.

Political Influencers are desperately seeking a national Democratic operation that acts as a bullhorn for their own voices to be heard. Right now, these Influencers don’t express confidence that the DNC represents their interests, and even fewer believe the party has strong leadership or is on a path toward victory. Bottom line: The work is cut out for this new team that takes the reins at the DNC. In the meantime, Political Influencers recognize the importance of state and local organizing efforts, and are involving themselves at this level. It’s here, at the grassroots, that the rebuilding effort will reap its greatest rewards.

Note: The authors conducted a national survey of 988 Political Influencers. The survey was conducted from Feb. 7-11, 2017. For this survey, a Political Influencer is someone who has engaged in five or more of the following activities: presented his or her views to an elected leader (i.e., through letters, emails or calls); written a letter to an editor; urged someone outside his or her family to vote; used social media to discuss politics; urged someone outside his or her family to take part in a demonstration; urged someone to get in touch with an elected official; made a speech before an organized group; served as officer of an organization or club; run for public office; taken an active part in a political campaign; signed a petition; voted in an election; donated to a campaign or issue advocacy organization; participated in a community group that advocated for a specific issue; or taken part in a demonstration or protest.

These insights represent a diversity of voices across geographies, ages and professions. Notably, Political Influencers are not limited to traditional political circles and more often than not come from seemingly unrelated industries; in fact only 2 percent of respondents in this research consider their jobs to be in political advocacy and fewer than 2 percent reside in Washington. Political Influencers on the left are disproportionately white, female and college-educated. But what’s notable is that differences across these demographic groups are muted, the exception being among younger Political Influencers.

Matt McDermott is a senior analyst for Whitman Insight Strategies.