In "La La Land," "Manchester by the Sea," "Moonlight" and "Hacksaw," the spotlight shines on overcoming adversity 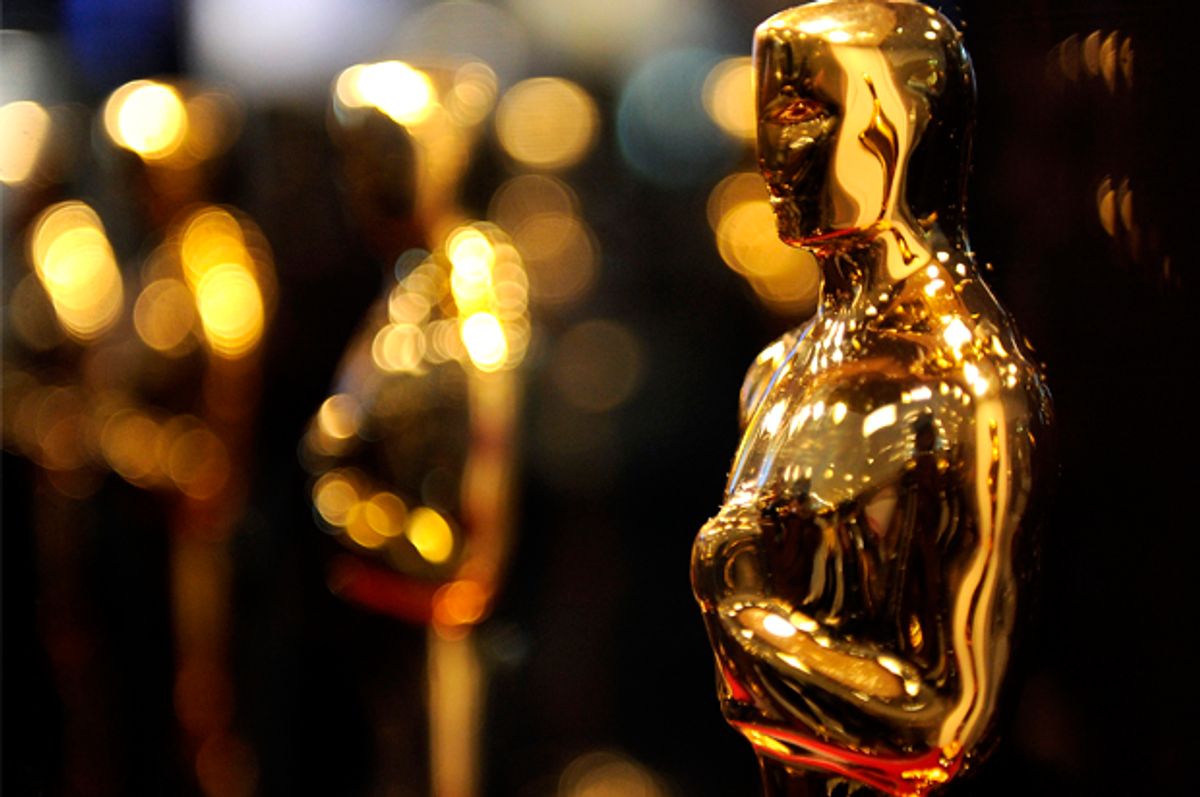 The 89th Academy Awards was an unusually smooth, largely funny show, until the end — when an unprecedented mistake changed the fate of two films. But well before "Moonlight" won a surprise best picture statue, and confusion over the win set the entertainment world afire, the awards show was full of lighthearted fun.

An always svelte and upbeat Justin Timberlake led off the ceremonies at the Dolby Theatre with his hit song “Can’t Stop the Feeling,” moving through the aisles with a crew of dancers and getting members of the audience on their feet. He segued into “Lovely Day,” and many in the audience sang. Timberlake introduced host Jimmy Kimmel, who was on fire, cracking jokes that did not fall flat or elicit groans, a rarity in recent Oscar telecasts. Kimmel joked, "At the rate you all go through Oscar hosts, I'll never be invited back."

He led off with a hat tip to the current political divisions in the United States, saying he had been asked by colleagues to make unifying statements. Kimmel admitted he could not do that and directed a gentle joke at "Hacksaw Ridge" director Mel Gibson, saying, "There's only one 'Braveheart' in the room. And he's not going to unite us either."

Poking fun at President Donald Trump throughout the show, Kimmel led off with a few cracks at the president's expense. Referring to Trump’s recent put-downs of Meryl Streep, about whom Kimmel joked, "From her mediocre early work in 'The Deer Hunter' and 'Out of Africa' to her underwhelming performances in 'Kramer vs. Kramer' and 'Sophie's Choice,' Meryl Streep has phoned it in for more than 50 films over the course of her lackluster career."

Kimmel said, "Meryl, stand up and receive a totally undeserved round of applause." He also tried to engage Trump on Twitter, joking, "Some of you will win and give a speech that the president of the United States will tweet about in all caps during his 5 a.m. bowel movement."

Later on during the broadcast, Kimmel picked up his mobile phone and tweeted the president, asking "Hey @RealDonaldTrump, u up?" Then he tweeted Trump again, this time with the name of best supporting actor winner Mahershala Ali, as a dig about immigration policies. (The president hasn't yet taken the bait.)

Ali won the best supporting actor award. With great sincerity, he led off by thanking his teachers, who taught him to let go of his ego, and become the character he is playing. “It’s not about you," he said they told him. "It’s about who you’re playing.” He signed off by saying, “peace and blessings.”

Afterward, Octavia Spencer, Janelle Monae and Taraji P. Henson stood onstage to announce the nominees for best documentary feature, but first they honored the woman who had inspired Henson's character in "Hidden Figures." Katherine P. Johnson, 98, was an exceptional mathematician at NASA and, as the film depicts, supported some of the agency’s most important missions.

“Movies about the lives of men and women in the history books have long been a staple of storytellers,” Monae noted. “Sometimes the names and deeds of the heroes in those films are known to all." Spencer added, "And then there are those films that shine the spotlight on those whose names were known to only a few but whose stories deserve to be told.”

Henson welcomed Johnson onto the stage, calling her “the one whose brilliance made our nation's achievement in space possible.” Johnson received a standing ovation as she was wheeled onto the stage in a wheelchair. Audience members wept openly, wiping away tears at the sight of the elderly woman who had inspired so many dreams for women of color in science and math.

Shortly afterward, during the performance of the theme song from "Moana," "How Far I'll Go," the singer Auli'i Cravalho, who is just 16, showed remarkable composure when she was hit in the head by one of the spinning dancers’ fabric sheets behind her, barely pausing.

In Oscar tradition, Jimmy Kimmel welcomed Cheryl Boone Isaacs, head of the Academy of Motion Picture Arts and Sciences, noting that she is a “president who believes in arts and sciences.” In her speech, Isaacs said, "Tonight is proof that art has no borders, no color and does not belong to a single faith. All artists are connected by a bond that is powerful and permanent."

In the following award segments, "Arrival" won for best sound editing, and soon after, Kevin O’Connell and his team won the award for best sound mixing in "Hacksaw Ridge." O'Connell thanked Mel Gibson for the opportunity and gave a special thanks to his late mother, Skippy O’Connell. She had helped him land his first job in sound and when at that time he had asked how he could thank her, he recalled she said, “You can work hard, do your best, win an Oscar someday and stand up on the stage in front of the world and thank me.” And, so, he did.

Midway through the show, Kimmel announced the dropping of Red Vines candy in transparent mesh bags from the ceiling, as he wondered aloud if the audience was hungry. “Time to see how well those Spanx actually work," he joked. Later cookies and doughnuts were also dropped from the air.

Viola Davis, wowing the crowd in a red off-the-shoulder dress, won the best supporting actress award for "Fences." Breathing hard and tearing up, she said the most talented people were those already dead and buried. “We are the only profession that celebrates what it means to live a life. Here’s to August Wilson, who exhumed and exalted the ordinary people,” she said about the playwright whose work was adapted for the film.  Thanking director Denzel Washington, she added, "Thank you for putting two entities in the driving seat: God and August Wilson."

Charlize Theron and Shirley MacLaine presented the best foreign film award to Iranian director Asghar Farhadi for “The Salesman." But in an act of protest against President Donald Trump’s executive order banning people from seven majority-Muslim countries, Farhadi did not attend. Instead, he tapped Iranian-American businesswoman Anousheh Ansari — the first Iranian astronaut — to read a statement from him.

Farhadi's speech made an impassioned plea for immigrant protections and better international understanding through cinema. “Filmmakers can turn their cameras to capture shared human qualities and break stereotypes of various nationalities and religions,” Farhadi wrote. “They create empathy between us and others, an empathy which we need today more than ever.” Afterward, Sting sang his original song "The Empty Chair" from "Jim: The James Foley Story." The screen behind him went dark and a quote appeared: "If we don't have the moral courage to challenge authority, then we don't have journalism."

"La La Land" song "City of Stars" won the award for best song. Justin Paul worked with Justin Hurwitz and Benj Pasek to write the tune. And in his speech, Pasek gave a special shout-out to his mom. "I want to thank my mom, who is amazing and my date tonight and she let me quit the JCC soccer league to be in a school musical," he said. "So, this is dedicated to all the kids who sing in the rain and all the moms who let them."

Best actor honors went to Casey Affleck for "Manchester by the Sea," the best actress title to Emma Stone for "La La Land," and the best director kudos to Damien Chazelle for "La La Land." In an unprecedented Oscars flub, "La La Land" was heralded as winner of best picture, but several minutes later, presenter Warren Beatty, in front of a dumbstruck crowd, had to retract this award. Presenter Beatty originally had been handed the wrong envelope by producers, and visibly paused, appearing confused, before he saw the names "Emma Stone" and "La La Land." Afterwards, he carefully explained why he had paused. The gods of diversity spoke, and "Moonlight" was awarded best picture, as a flustered "La La Land" cast and crew (who had already made their acceptance speeches) leaving the stage.

"La La Land" producer Jordan Horowitz graciously handed the golden statue to Barry Jenkins and the "Moonlight" team, saying, “This is not a joke. ‘Moonlight’ has won best picture." Jimmy Kimmel apologized for the error, closing the show with a joke, of course. "I blame myself," he said. "I told you I'd screw this up, and I did! I go back to my regular show tomorrow night: I promise, I'll never come back here."