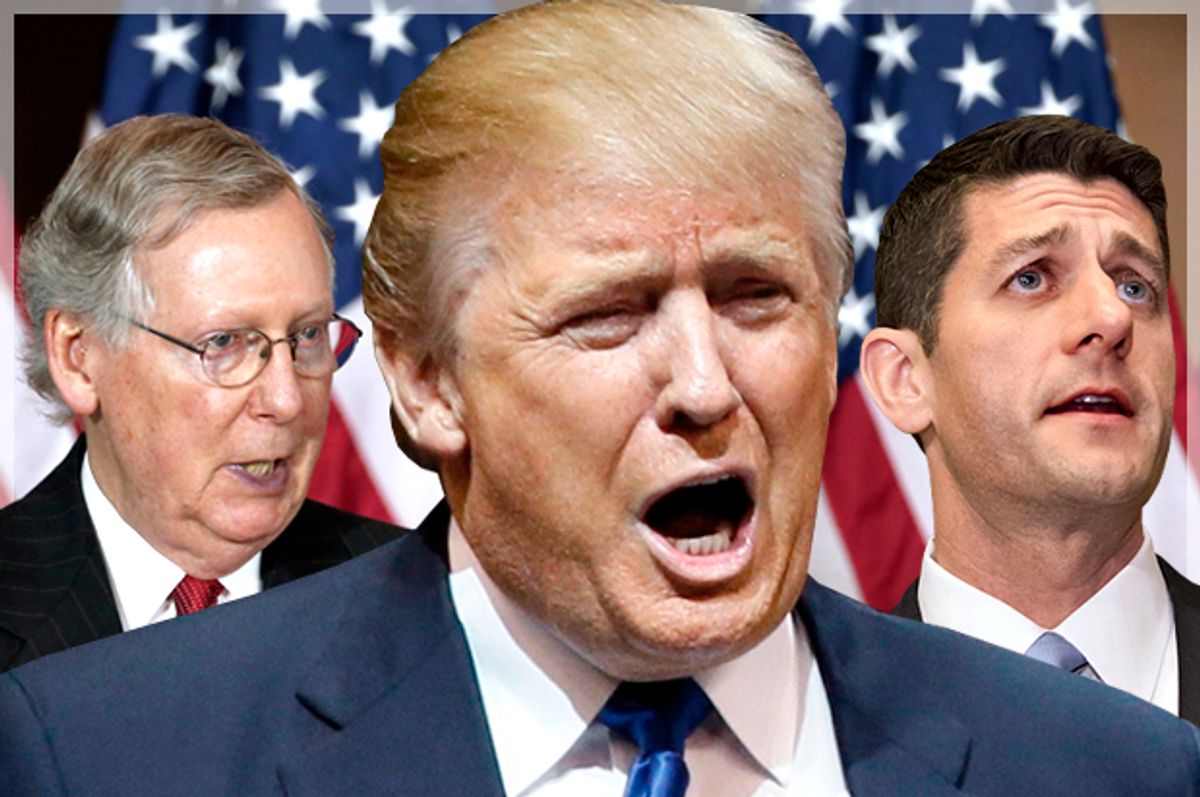 It's an established fact: President Donald Trump is a shameless, relentless liar. He rarely makes it through a public appearance without uttering deliberate, outrageous falsehoods. Lies defined his campaign, creating a cottage industry of journalists listing and even cataloguing his lies. Now that he's in office, the relentless lying has continued and may have even increased, creating a real crisis for publications that want to keep track of them all, since the sheer volume of his lies tests the capacities of even the most well-funded news organizations.

Under the circumstances, it's tempting to treat Trump as an anomaly and to view his mendacity as some sort of new development in conservative circles. But while Trump has introduced a new level of dishonesty into the world of White House communications, the grim reality is that his duplicity builds on years — decades, really — of movement conservatism honing lies as a major and, in some cases, central public relations tactic.

For journalists like myself who have covered the reproductive-rights struggle for a long time, Trump's bottomless ability to lie feels very familiar. The anti-choice movement is the vanguard of the conservative movement generally. Tactics that anti-choicers develop and hone tend to spread out through conservatism, and nowhere is this more evident than when it comes to the use of shameless lying as a tactic.

What's remarkable about the anti-choice movement is that it lies about pretty much everything. Anti-choice activists have churned through a series of legal and rhetorical gambits over the years, and while the focus may change, one thing always stays the same: Their arguments are built on a foundation of lies — every time, without fail.

The recent attacks on Planned Parenthood, for instance, have been justified by the claim that the venerated health organization "sells baby parts." This is a lie. In the recent Supreme Court case Whole Women's Health v. Hellerstedt, the state of Texas argued that many abortion restrictions were necessary to protect women's health. That was a lie, which the court saw right through. In the Hobby Lobby v. Burwell case challenging the Affordable Care Act's contraception coverage requirement, the anti-choice side argued that certain forms of birth control work not by preventing but by terminating pregnancies. That's a lie.

Anti-choicers are also fond of arguing that having an abortion often leads to deep regret and even mental health issues for the women involved. This is a lie. Various states have sought to ban abortion after 20 weeks of pregnancy, claiming that fetuses can "feel pain" at that stage of development. This is a lie. Anti-choicers also argue that abortion causes breast cancer, infertility and other physical health problems. These are lies, which, unfortunately, have made their way into pamphlets that some states force doctors, in defiance of medical ethics, to give to patients.

Anti-choice activists are so shameless that they are now trying to pretend "abortion reversal," a harmful and offensive fiction, is a real possibility.

Unfortunately this kind of relentless lying can be highly effective. It's impossible to argue with someone who won't concede even basic facts, making any attempt at reasoned discourse fall apart. Reactionary arguments perform better when the plane of discourse is all feelings and stereotypes, and lying is the best way to make sure their supporters don't feel the tempting pull of reality-based thinking.

That's why the popularity of outright lying as a tactic is spreading all over the right. Unsurprisingly it started spreading in religious right circles. As with the anti-choice movement, the opposition to LGBT rights has been based on a series of lies, from the claim that marriage of same-sex couples somehow threatens those of straight couples to the current baseless hysteria about trans people using bathrooms. The creationist movement is not only based on lies; it's about instilling lies in the classroom. We see the same story with abstinence-only "sex education" programs, which promote false information about contraception in their material and suffer from the delusion that premarital abstinence from sexual intercourse is likely to be a viable option in 21st-century America.

But endless lying really made its Great Leap Forward out of religious right circles into broader conservatism with the debate over climate change.

Denying that climate change is really happening and is caused by human activity is, objectively speaking, a mainstream conservative position. Fifty-nine percent of Republicans in the House of Representatives and 70 percent of Republicans in the Senate, as of March 2016, denied the scientific facts around climate change, according to Center for American Progress Action Fund polling.

In other words, the majority of congressional Republicans are liars. Not "liars" in the way politicians are usually called liars. These are not people who shade the truth or exaggerate evidence or occasionally say untrue things that they have to take back during a campaign. These are people who are committed to an outright lie about climate change and who refuse to back down under pressure.

That's why Trump isn't an anomaly. Instead, he's just someone who correctly assessed that the Republican Party has no problem with lying as a strategy and has taken that observation to its logical conclusion.

So no one should be surprised to see Republican politicians falling in line with even some of Trump's most obnoxious lies. For instance, when the president started spouting off about how those who challenge him are just "paid protesters," the GOP caucus started echoing this lie, marginalizing and undermining their constituents with it.

Most of these politicians were perfectly happy to embrace lies about everything from abortion to climate change, even back when they thought Donald Trump was a dangerous rebel outsider who was out to destroy the Republican Party. So there was never any reason to think they would suddenly start feeling moved by the moral imperative toward honesty now that he's in the White House.