"I don’t think as artists we’re supposed to have a very specific mission. . . . We’re supposed to go towards what is meaningless": Songwriter Ben Folds judges Nat Geo photo competition 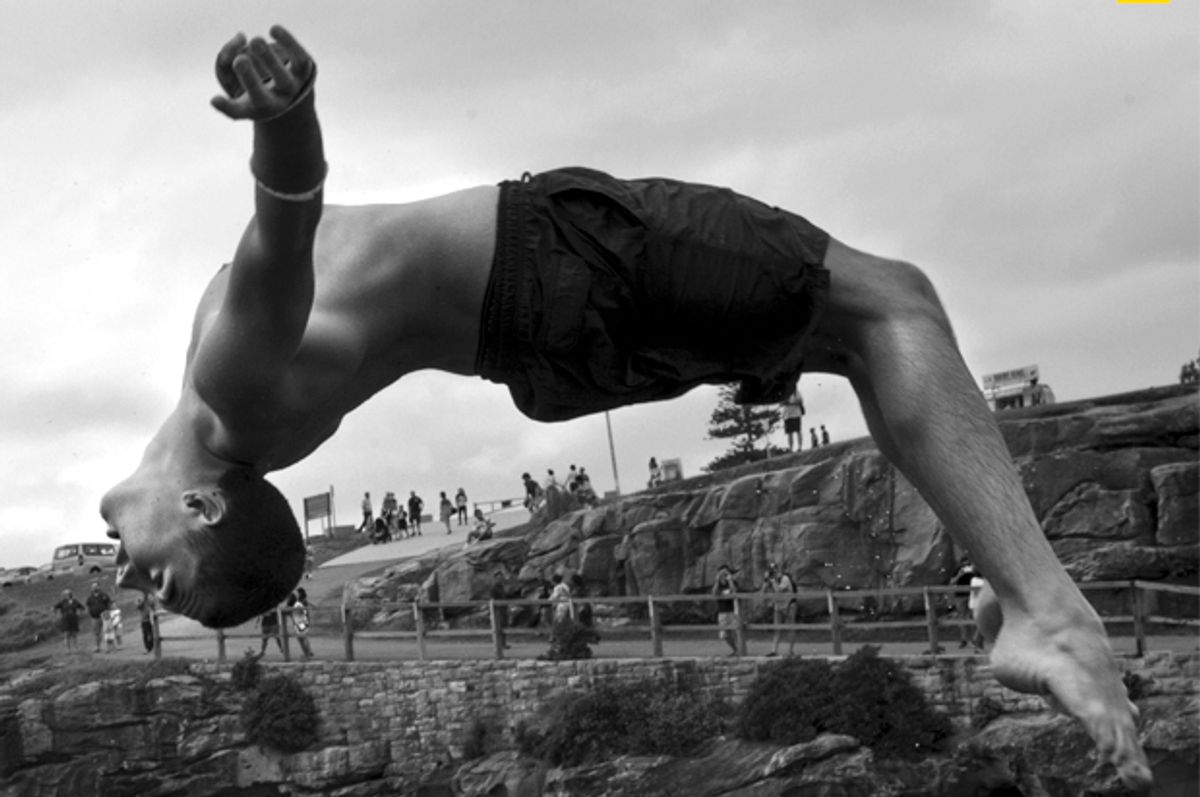 Besides being a songwriter, Ben Folds is also a photography enthusiast who favors stark, resonant black-and-white photos that illuminate tiny slices of life — two of his kids excitedly peering out a hotel window; or a pair of glasses atop sheet music; or a friend's dogs walking in a desert-like outdoor scene straight into a stormy sky.

This aptitude made him a natural to curate an assignment for National Geographic's photography community, Your Shot, asking people to submit snapshots centered around the concept of anachronisms. "An absurdity such as an anachronism can help illuminate who we’ve become, what has changed, and what has remained the same," Folds wrote in the assignment memo. "As a songwriter, I’m given to see art in terms of its story, and I think an anachronistic photo gives us a lot of potential for a story."

Thousands of photos were submitted for the contest, although the 15 snapshots Folds chose to highlight each tell a self-contained story. One black-and-white photo features a woman having her hair done at an old-fashioned salon with trinkets both old (roller skates, a vintage radio) and new (an Apple laptop, a Starbucks drink) around her. In another black-and-white photo, a watch repairman rocks a monocle while making adjustments in a place decorated with modern Swatch ads. Another striking photo features a member of Papua New Guinea's indigenous Huli tribe taking a selfie while holding a cellphone whose case is the exact shade of the paint on his chest. And then there's the posed shot of a couple sitting in a living room that seems straight out of "Mad Men," complete with a drink, a Life magazine and a cigarette — except for the modern TV mounted on the wall.

For the coming months, Folds is planning solo piano shows, "one of my favorite ways to tour," he said. "It’s really a flexible, spontaneous, raw way to tour, and I really enjoy that." Folds is also starting to think about creating more songs for another album of his own, noting he is "staying a little bit available for when Kesha needs me from time to time, as we work out some music for her. She’s got these great songs that we’re waiting for the green light for her to be able to release them." Folds checked in from New York via phone on a snowy day to discuss how photography informs his music (and vice versa) and his philosophy toward the visual discipline.

What attracted you to the concept of anachronism?

Time is really the interesting element of photography. I mean, you’re stopping it, so one would assume you’re taking time out of the equation. And [photography is] not an art form that exists in time like music does. But actually you’re drawing much more attention to it.

The ambiguity of time often creates a poetic implication. Because when it becomes ambiguous, what time is it? When was this done? Who’s in it? Do they belong there? Those things start painting a story that you can’t do so well in music. So I thought that was interesting for that reason.

What makes capturing anachronisms challenging through the medium of photography?

Most everything is not against time. Most everything that you see is, you know — just put a camera in any general direction and you can kind of tell what it is. So finding that thing that is the exception, that somehow finds itself within the frame, to call into question when something was shot or [that] there's something about the time involved in the shot, that’s hard. That is not normal.

Especially now when you look at Instagram filters and what you can do in Photoshop, sometimes it’s difficult to tell when and where a picture was taken. It’s a lot more difficult now, I think, than it’s ever been.

At first glance, it might be. I mean that’s the layers that you peel back on what a viewer could be thinking or seeing. Most of us are pretty well acquainted now with the various Instagram filters. When I see someone just drain[s] the color out of a photo and call[s] it a black-and-white photo, I mean I feel like I can tell that’s a digital photo with no color in it and not the real thing. It’s harder to actually pull that off. You have to know something.

The pictures that you chose as the winners, or the ones that stood out to you in the contest, were all really poignant. Talk about what you were looking for as you were choosing these pictures.

I like to be moved by anything that I’m seeing. So I have to be able to step into it for a while, see it differently on different viewings and the longer that you look at it. That’s always the nice thing. It’s something I’ve always aspired to do in a song.

And also as someone who's shot a whole lot, the relationship between the photographer and a subject [is different] once the photographer knows the subject. And you don’t always know exactly what that is. But a photographer who really knows something about the subject and is shooting with purpose — their photos have legs and they stick around. That’s what I wanted to have in the photographs that I was choosing, something that I would step into and could see it differently. A lot of the photos have a real intimacy to them to that’s really striking. You feel like you’re being a voyeur almost.

I do like that about photography. You know, a photographer steps into a scene and changes the scene by his or her presence. Someone can say, “Pretend like I’m not in the room if you can, OK?” Well, you can’t do that. Yeah, I’m always impressed with photographers that can [achieve] that effect. Sometimes it just takes shooting a while, and then you become more of a fly on the wall because they just get used to you.

You’ve had experience judging a cappella groups and other music in the past. What are the major differences assessing photography as opposed to assessing music?

Art forms . . . God, you know, they’re such different disciplines. I frame things in terms of a story. That’s what I understand. So when I’m writing a song, the details are meant to create the story. When I see a photograph, I’m often thinking in terms of [a] story. I’m sure there are other ways to look at art. You know, design is like that. My friends that are really into design as art see it differently than I do. I don’t see a story on all of those angles, so I’m not as interested. Music can be like that, too. Music can be very pointillist in a way that is not so much about a story.

The last picture in the sequence, with the two people sitting on the couch reading the Life magazine, is my favorite. You can tell it is posed and very deliberate, but it’s just a very interesting, self-aware type of anachronism.

The story I get out of this one has something to do with our relationship and sort of romantic fascination with that particular era of the '60s — because that particular era of the '60s is often depicted in different ways. There was all of the hippie stuff going on and, you know, in terms of music, maybe there’s Janis Joplin. But on the other side of the spectrum, there’s Burt Bacharach. And these people [in the photo] have decided that they kind of have an attachment to more of the gin-sipping, Burt Bacharach, sort of martini, Scotch glass era. I think that is interesting. I also notice that the guy’s cigarette is about to ash on that poor woman’s foot.

Who are some of your own photography idols or people that you particularly respect and admire?

I like black-and-white photography of the middle 20th century a lot. I like where we were about capturing music as well. It was an aesthetic and an ethic that I find fascinating. A lot of my favorites are going to be from that era: W. Eugene Smith, Bill Brandt. I love Ansel Adams.

Your photos are little slices of life. When you’re taking your own photos, what are you trying to achieve with them?

I’m trying to make something that I can print and be interested in. You know, that’s not a very highfalutin mission there — just to shoot something that you think’s going to be pretty. But that’s kind of where I come from. I mean I’m not really as much encouraged to say that about my own music because we want to think that there’s some master plan.

Honestly, that’s the way I make music, too. I go towards what interests me. And sometimes that seems pretty vapid, you know? Like, "Oh, it took two notes. Actually, I like one of them." It really can be like that. I don’t think as artists we’re necessarily supposed to have a very specific mission. I think we’re supposed to go towards what is meaningless. And that can be some candy-ass shit. It really can.

It doesn’t mean that what you come up with is going to be candy. I think you just follow tones, lighting, events, something that interests you. . . . Making something artistic is not just a simple matter of taking one step; it’s a lot of visions and steps. I don’t think you have to have a master plan when you begin. I mean, there are times when there’s something to say, and you might find yourself in that circumstance as an artist. And then it’s time to do that. But I don’t think it makes for lesser art because someone doesn’t have a master plan. How has photography over the years informed your songwriting and vice versa? Are there any significant ways?

The main thing is that it keeps me from being as snobby about music. My tendency is not to want to hear people talk shop with music. I don’t give a shit what kind of mic they used and stuff. But I'm so happy about equipment, for instance, in photography, and I realized it’s such a fount of joy. It makes me much more tolerant and interested and realize that “Oh, you know what? The piano that I use is part of what’s going on. Sure, why not? That’s fine.”

You know, I [maybe used to] find myself saying, “Well, who cares? I have the idea and I could play this on a Casio, if that’s what you need." But when it comes to photography, I’m like, “Oh, no, I use this camera, developed it with this, and I did these things to it.” I’m wide-eyed about [photography], and that keeps me that way in music, too.