Faced with internal strife, Paul Ryan borrows a tactic from his predecessor to force the issue on Obamacare repeal 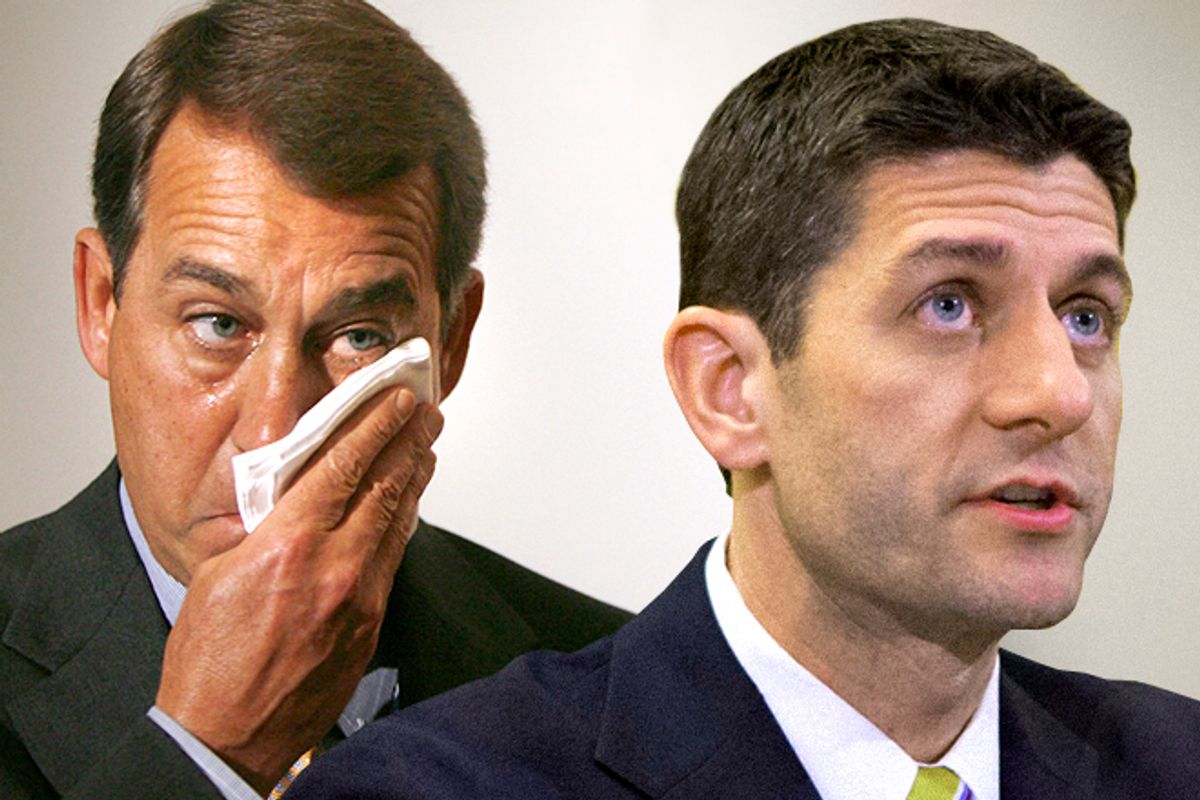 President Donald Trump has had an epiphany — sort of. Speaking on Monday at the White House about his new budget proposal, Trump waded into the topic of health care reform, describing it as a “very, very complicated issue.” The president couldn’t believe just how amazingly thorny health care policy is. “I have to tell you, it’s an unbelievably complex subject,” he said. “Nobody knew that health care could be so complicated.”

Here’s the thing about health care: The one thing that pretty much everybody knows about health care and health care policy is that they are complicated. They are byzantine nightmares of near-indecipherable minutiae. The only people who don’t know this and are surprised to learn about the health care system's complexity are policy-ignorant rich people who don’t have to worry about the costs of care because they have enough money to afford whatever treatment they want. We elected just such a person president, and he is now awakening with childlike wonder to the reality that health policy is far trickier than vacant political sloganeering would suggest.

One person who is acutely aware of the political and policy complexities surrounding health care is House Speaker Paul Ryan. He is, after all, the person in charge of making good on the GOP’s longstanding promise to “repeal and replace” the Affordable Care Act now that Republicans control both the White House and Congress. The problems Ryan faces are many and difficult: His party can’t agree on what its replacement legislation should be like. And its leaders and members haven't agreed about how to go about actually repealing the ACA.

The GOP’s activist base and hard-liners are demanding quick action on repeal, but other Republicans in Congress want to slow down things so as to be able to come up with a replacement. In states whose policymakers have embraced parts of the ACA, Republican governors also pushing against precipitous repeal legislation. And while Republicans struggle with the policy details, the politics of Obamacare repeal keep growing uglier for them. GOP members of Congress have been confronted by furious constituents at town halls who demand to know what the legislature has planned for health care.

The Affordable Care Act itself is also experiencing a surge in popularity in recent polling. Given the partisan breakdown in Congress and the near certainty that no Democrat will break ranks to repeal the Affordable Care Act, Republicans can’t afford more than a handful of defections when it comes time to vote whether to obliterate the health law.

Confronted with all these complexities, Ryan and the Republican leadership seem to be making a big, risky gamble on simplicity. As The Wall Street Journal reported on Monday, the leadership’s plan is to set the repeal legislation in motion as soon as possible and trust that partisan loyalty will carry it to President Trump’s desk. “Republican leaders pursuing the ‘now or never’ approach see it as their best chance to break through irreconcilable demands by Republican centrists and conservatives over issues ranging from tax credits to the future of Medicaid,” the Journal noted. Ryan is betting that Republicans will be too scared to vote against repealing Obamacare, regardless of what the bill they're voting on actually says.

This is a strategy borrowed from Ryan’s predecessor as House speaker, John Boehner. And as Boehner’s ignominious exit from Congress demonstrates, it is extraordinarily risky. For those who don’t remember, the Boehner speakership was marked by a series of crises, both real and manufactured, that required House Republicans to behave coherently so that the basic functions of government could be preserved. Ideological divisions within the party made that impossible, so Boehner often found himself caught between his party’s intransigence and the responsibilities of governing.

After much dithering, Boehner would invariably find himself forced to act, at which point he’d pull a Leeroy Jenkins: Heedless of all political dangers, he’d toss out a piece of poorly considered legislation to address the crisis — under the assumption that partisan loyalty would carry it to passage — only to see it crash and burn due to GOP defections. This happened with the 2012 fiscal-cliff crisis, when Boehner tried (and failed) to ram through a last-second tax bill. It happened again during the 2014 child migrant crisis, when Boehner’s border security legislation was torpedoed by hard-liners in his own caucus.

Boehner gambled that his members would subordinate their own agendas to the broader agenda of the party, and it backfired on him spectacularly. Ryan is now making that same gamble and trusting that these same Republican legislators will disregard both the practical and political complexities of health care policy and be content with a more simplistic vision of Obamacare repeal.

If Republicans were at all united on health care policy, this strategy wouldn’t be necessary. But it’s Ryan’s only shot, so he has to take the risk. And when it comes to Boehner, he’s not confident Obamacare repeal will happen at all.