Sweet charity: From the Governor’s Ball to the streets, post-Oscar food waste feeds many 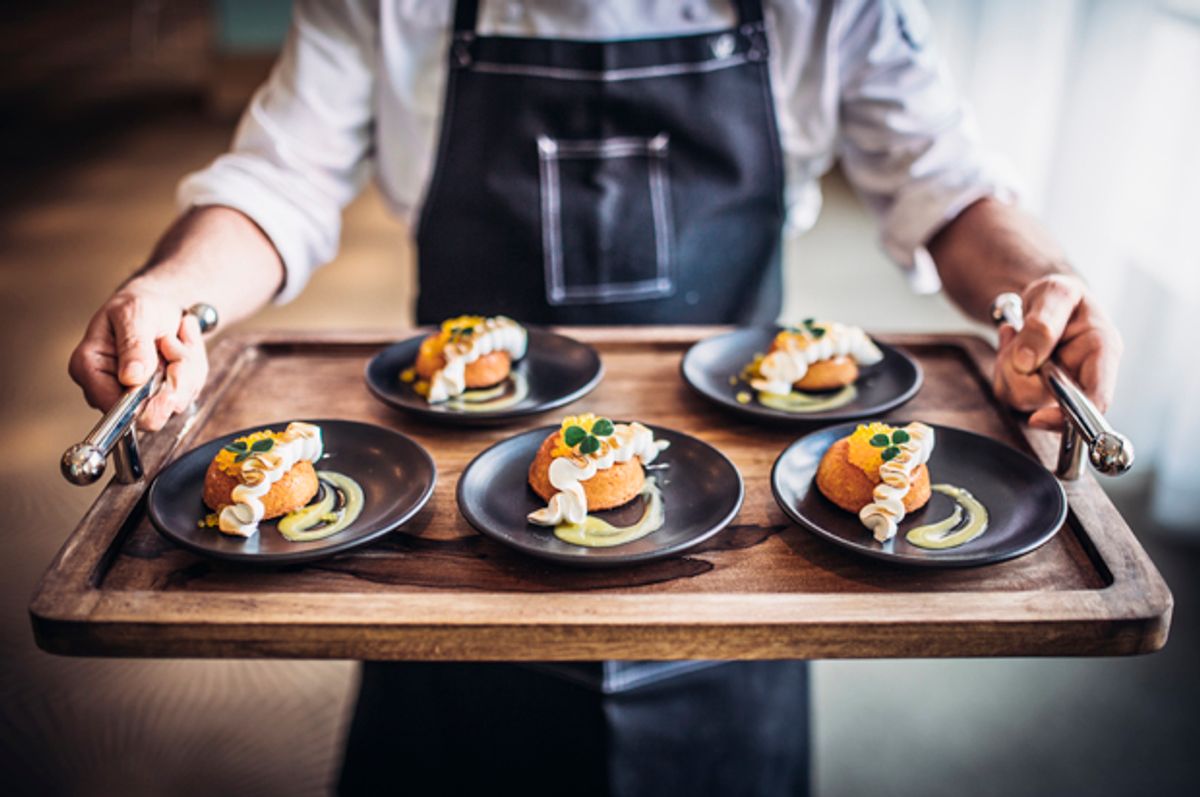 Every year, from the time the first of 3,000 small plates are sent out to the 1,500 Academy Awards Governor’s Ball guests, until the last dish is washed, hundreds of pounds of food goes uneaten. This year, rich short ribs, an entire octopus, chilled soups, Parmesan funnel cakes and elaborate desserts — including edible “Oscar” statues — were on the menu, even though it is well known that celebrities and their entourages don’t eat much food.

The Academy Awards have always been the most lavish display of fame and fortune Hollywood offers-up each year, and guests of the many Oscar balls are known to consume plenty of champagne, and less of what's on the menu.

Which begs the question, what happens to all those lovingly prepared eats that are planned out months in advance by famous chefs like Wolfgang Puck? For the last 23 years, Puck’s kitchen has prepared the menu for the annual Governor’s Ball, the largest event, and his staff knows that many of their creations will exceed demand. Instead of wasting them, Puck has long partnered with food recovery organizations to deliver vast quantities of leftovers. Since his Spago days, in fact, said Jackie Kelly, one of his executive chefs in charge of Oscar prep and execution.

“Wolfgang has been working with LA Specialty and Chefs to End Hunger — LA Specialty's charity organization — for six years,” she told me last week from the Wolfgang Puck Catering’s kitchen, amidst the bustle of Governor’s Ball food preparation. “We are in full production mode right now, and as of today, Thursday, we have 30 people cutting beets, we have short ribs marinating for 72 hours about to get braised, and we have smoked salmon ‘Oscars’ being prepped."

Chefs to End Hunger is a 501(c)(3) charitable foundation started by LA&SF Specialty, a food vendor that many chefs like Puck buy from.  The company has trucks delivering to over 2,000 locations daily, and is capable of dropping off supplies of boxes and foil sheet pans, which chefs then fill with leftover food. Full, refrigerated boxes are picked up from customers like hotels, restaurants and other food service operations daily and delivered to homeless shelters and other service organizations around California, Nevada and Arizona.

The day of the Oscars is an early one for the Puck staff: the action starts at one p.m. with hors d'oeuvres out in the lobby, and the service is over around nine p.m., said Kelly. “Right around 11 at night, when we know it’s starting to slow down, and the celebrities have moved on, we take a look at what we have left. The short ribs we expect to be left over, because people only take a little bite. The chicken pot pie is always left over, and pasta.”

Even dishes for those with dietary constraints remain. “We can do gluten free, no dairy, whatever comes in: Chef [Wolfgang Puck] and our team will make sure it’s available,” said Kelly, who in the face of trying to stem food waste has fielded all sorts of odd celebrity food requests during the Oscars over the years via Puck’s “accommodations” phone line — including those for less food. “We had a lady who said, ‘Can you just make me a smaller plate of that one you just sent out, because I have no self control,’” chuckled Kelly. “We thought, ‘just don’t eat that second piece of meat,’ but her staff said that she needed the smaller plate.”

Kelly said that on average, Puck’s kitchen packs up 15 - 30 large “400” size foil pans on Oscar night (each of which feed 30 people or more), which they leave for Chefs to End Hunger’s 6 a.m. pick-up the next day, when security has cleared. Recipients in the Los Angeles area include the Midnight Mission and The Los Angeles Regional Food Bank, both of which Chefs to End Hunger has a long-running partnership with.  The Midnight Mission, located on Los Angeles’s Skid Row, serves 90,000 meals a month, in addition to offering emergency services, a 12-step recovery program, job training, education, and work programs.

And it wasn’t just the Governor’s Ball and Wolfgang Puck Catering that worked to redistribute excess food.

Freida Pinto, Slumdog Millionaire star, partnered with a San Francisco-based food recovery technology company called Copia, to ensure that no party food was wasted at this years’ Los Angeles awards ceremonies. Copia provides restaurants with pickup and delivery methods to package and distribute leftover food for a volume-based fee, instead of creating waste or composting.

Copia founder Komal Ahmad, in the midst of distributing food on Monday, wrote, "I grew up thinking hunger was a developing world problem, and it wasn’t until a chance encounter with a homeless man in Berkeley that my whole understanding of this problem shifted." Instead of giving the man money, she bought him lunch, and listened to his story.  John had just returned home after serving in the U.S. military abroad. While waiting weeks for his military benefits to kick in, destitute, he had been left on the streets to starve. John hadn’t eaten in 3 days, Ahmad said.

As they ate lunch, the two watched as across the street, Berkeley’s dining hall threw away thousands of pounds of perfectly edible food.  "The stark reality between excess and access is exactly what makes this one of the world’s dumbest problems and the reason I started Copia as a necessary disruption through technological innovation," she added.

Pinto noted on her Instagram feed that Copia worked with the Independent Spirit Awards caterer to pack up and deliver all excess food to the Los Angeles LGBT Center on Sunday morning. Ms. Pinto, who was unavailable for comment today because according to her rep, she was “midst of assisting in the disbursement of the food collected during the food recovery from last night,” wrote further on Instagram yesterday, “Wastage isn't glamorous, feeding people is! #zerowaste #zerohunger#eatlikeastar @gocopia”.

The actress spent the days leading up to both the Oscars and Independent Spirit Awards posting on her social feeds about Copia.

The Stories that feed our culture has now fed OVER 800 people. Sharing excess food to feed our community is a No-Brainer. Thank you @filmindependent #spiritawards @gocopia @lamission for making this happen! #zerowaste #zerohunger #eatlikeastar

Copia may represent a tech solution to a long-standing international problem, one that food recovery advocates like Brette Waters of Chefs to End Hunger argue can easily be eradicated with better management. Over 40 percent of all food produced goes to waste, she said by phone from Los Angeles last Thursday. “At America’s foodservice establishments, a tremendous amount of excess food is thrown away at the end of each night,” said Waters. “At the same time, nearly 50 million Americans live in food insecure households, including more than 15 million children.”

Instead of using food recovery as a modality for feeding these millions of hungry Americans, restaurants create literal mountains of waste. “Uneaten food ends up rotting in landfills as the single largest component of US municipal solid waste, where it accounts for a large portion of U.S. methane emissions.”

The efforts of partnerships like Pinto’s with Copia, where she uses her celebrity to promote the tangible benefits of food recovery, as well as expanding organizations like Chefs to End Hunger, are taking the saying “think globally, act locally” to a new level. The organization is also helping the earth, whose atmosphere suffers the burdens of methane emissions from so much food waste in landfills.

“California must achieve 75 percent waste diversion by 2020, and the city of Los Angeles must achieve 90 percent waste diversion by 2025,” said Waters. “Food recovery and rescue is a highlighted initiative to tackle this problem, and everyone can participate,” she said. “Chefs feed people — that’s what they do. Chefs to End Hunger is offering food service operators a way to minimize the amount of food wasted, while feeding those in need. It's a win-win-win."

Waters is committed to growing Chefs to End Hunger's reach in the coming year. “The problem of feeding those in need is not one of availability, it is one of resource distribution,” she explained. “American consumers, businesses and farms spend over $200 billion annually to grow, process, transport and dispose food that is never consumed.”