Tennessee has declared war on same-sex families: Inside the legislation that would eradicate nearly all rights for LGBT couples 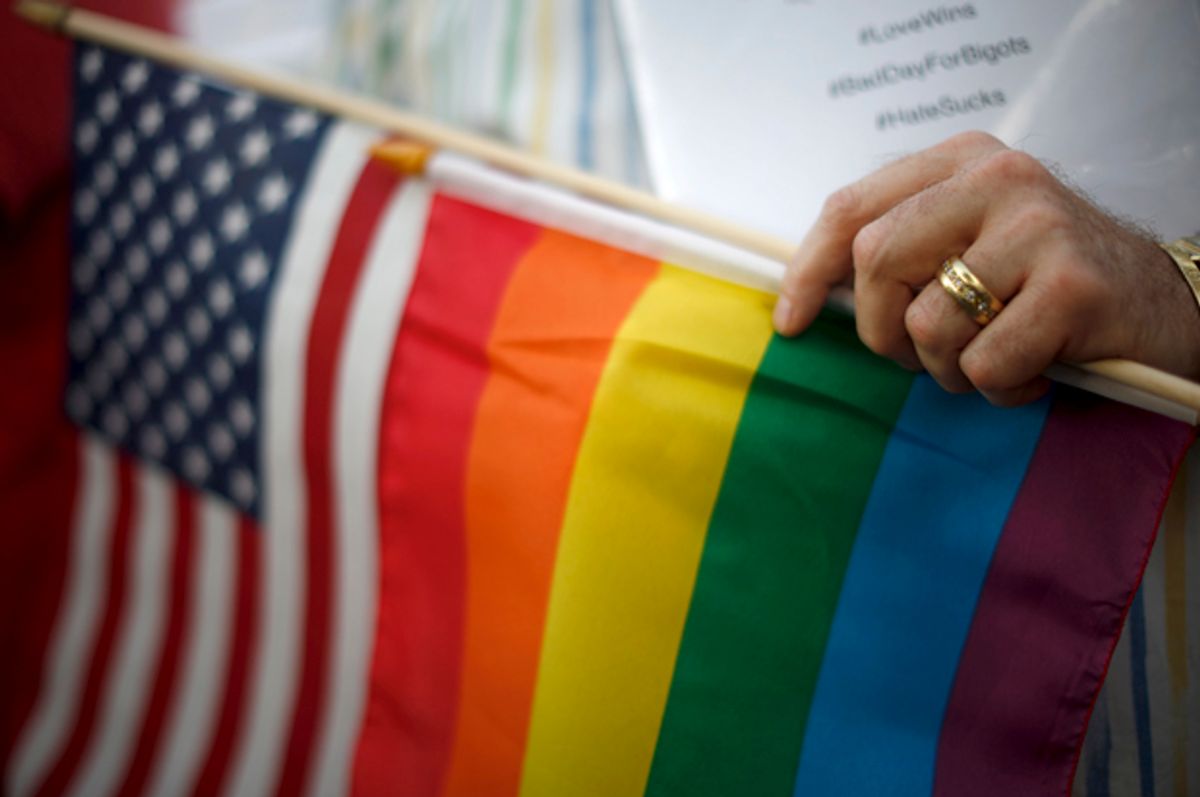 Heather MacKenzie bought her wedding ring at Wal-Mart. MacKenzie, now 38, proposed to her wife, Charitey, by driving to the top of Tiger Hill in Murfreesboro, a town located near the couple’s Tennessee home. The hill, a favorite spot for preteen sledders during the winter, looks over the entire town, as well as the vast expanse of the surrounding area. This was where the MacKenzies had their first date.

The pair said “I do” in June 2015, just days after the Obergefell v. Hodges ruling legalized marriage between same-sex couples in their state. The MacKenzies were wed in Nashville in front of the courthouse under a magnolia tree.

Over a year later, the couple are expecting a child: Charitey is 12 weeks pregnant with a son. A trio of recently proposed laws, however, could jeopardize the future of their growing clan. This legislation seeks to erase any hint of legal recognition for LGBT couples in Tennessee, all but declaring war on the families of same-sex parents living in the state.

Filed by State Rep. Terri Lynn Weaver, House Bill 1406 would prevent a couple from listing on the birth certificate the second parent (the spouse not giving birth) after a woman becomes pregnant through artificial insemination. The legislation would nullify a provision of the Tennessee Code Annotated 68-3-306, which was issued as part of the Vital Records Act of 1977. The law states, “A child born to a married woman as a result of artificial insemination, with consent of the married woman's husband, is deemed to be the legitimate child of the husband and wife.”

If Weaver’s bill passes, Heather would not be considered the legal guardian of the child on the way. In order to gain that status, she would have to file for a second-parent adoption, a process that’s both costly and time intensive. The couple is raising a daughter the two adopted four years ago and it cost $6,500 for Heather and Chariety to gain her custody.

“It’s a lot of money, especially after you’re preparing for a newborn,” said Heather, who works as a supervisor for an automotive distribution center in Smyrna. “And now you have to go adopt your own child. We know a lot of couples who have waited until their kids are in elementary school because they waited to save up to do the adoption. If something happens in between that time, it could be really harmful to your family.”

If Charitey were to be in a car wreck, for instance, Heather could make legal decisions for her but not for their expected child. The  newborn would have no rights to Heather’s inheritance or her insurance — an added complication for the couple. If HB 1406 were to be passed, it would go into effect on July 1, three months before Charitey is expected to give birth. Heather receives health care benefits through her workplace, but if the new baby would not be longer eligible for that coverage, who would pay for the hospital costs?

The legislation leaves a terrifying number of unanswered questions, few of which have been answered by HB 1406’s authors. Although Weaver claimed in a Facebook post that the legislation is not intended to target same-sex families, she didn’t address the fact that her bill does exactly that.

The legislation, which was put forward this month, appears to have been introduced in response to a divorce case concerning a lesbian couple in Knoxville. The Republican lawmaker was one of 53 legislators who filed amicus briefs siding with the court’s decision in a case last year in which Erica Witt lobbied for custody of a daughter she had conceived while wed to her wife, Sabrina, prior to the Supreme Court’s ruling on marriage rights of same-sex couples. The judge decided that because Tennessee didn’t legally recognize relationships between two women in 2014, Erica had no visitation rights whatsoever.

HB 1406 isn’t the only bill, however, that would make lives more difficult for same-sex couples in the state. Republican state Rep. Mark Pody has refiled House Bill 892, also known as the Tennessee Natural Marriage Defense Act. Voted down by the General Assembly last year, the legislation seeks to override the Supreme Court’s decision on same-sex unions in favor of the state's definition — or lack thereof. In 2006, 81 percent of voters cast a ballot saying that marriage should be between one man and one woman.

In addition, there’s also House Bill 33. Sponsored by state Reps. Janice Bowling and John Ragan, the bill would “[require] that the words ‘husband,’ ‘wife,’ ‘mother,’ and ‘father’ be given their natural and ordinary meaning” in any legal or legislative context.

According to The Tennessean, HB 33 could have extreme, sweeping effects on same-sex couples in the state, erasing the rights and benefits afforded to their relationships at every turn. The newspaper has reported that the word “mother” appears more 110 times in local laws, including everything from marriage rights to divorce and even filing your taxes. In addition, “father” popped up 68 times in a search of state and local legislation, while “wife” showed up on 55 different occasions.

Beth Littrell, the staff counsel for Lambda Legal, called these bills a “mean-spirited waste of time that would be struck down by the first federal court to hear the challenge.”

But even if these three discriminatory pieces of legislation are unconstitutional, it “could take years before they are overturned,” as Sarah Warbelow, Human Rights Campaign's legal director, explained. In the interim, they could do enormous damage to the lives of LGBT families. For instance, HB 33 would stipulate that if one member of a same-sex couple dies, he or she doesn’t have to be treated as a legal spouse possessing the same property rights granted heterosexual couples. And because he or she wouldn't be recognized under the traditional definitions of “husband” or “wife,” the surviving partner could be forced out of the home they shared.

“The real victims will be the children of same-sex couples and of all couples who are conceived by means of fertility clinics,” Littrell said, noting that the artificial insemination bill would also affect opposite-sex parents. “It seems awfully counterproductive.”

Chris Sanders, the executive director of the Tennessee Equality Project, noted that bills like HB 1046 are bad for all couples. For instance, in cases of artificial insemination if there’s no longer the presumption that the second parent should be listed on a birth certificate, a husband may be forced to go to court to lobby for parental rights in relation to his child. That legal process would have the unfortunate side effect of outing infertile mothers who may not want to advertise to family and friends that they are not able to conceive children without the help of medical professionals.

“It gets rid of your privacy,” Sanders said. “It’s suddenly a public process and everyone knows your business.”

But while these bills hurt everyone, they are part of a targeted legislative push to make LGBT Tennesseans feel unwelcome and unsafe in their own state. This trinity of anti-marriage legislation coincides with the re-introduction of a bathroom bill, filed by Rep. Pody and state Sen. Mae Beavers, intended to prevent trans people from using the public restroom that corresponds with their gender identity. A similar law had been considered last year but tabled following overwhelming backlash — much like the controversy that has followed North Carolina’s House Bill 2.

While LGBT people in the South have been fighting against right-wing bigotry for decades, Melissa Snarr said it feels “brutally personal” this time. “We’re used to that sort of thing in Tennessee, but after the election, it’s become even more brutal,” said Snarr, who teaches at Vanderbilt University’s School of Divinity. “I woke up with my son at 5:45 this morning and did all the normal things to make him feel safe and loved, but there’s no sense of me as a person. We’ve become an issue. We’re not actually people. It feels like a choice by the legislature to erase our lives.”

Snarr, 46, who is raising a 6-month-old son with her wife, Kelley Francis, said that same-sex couples will continue to fight to gain the same legal recognition as heterosexual families. It’s what they’ve been doing for decades. The Snarrs married three years ago, prior to the Obergefell v. Hodges decision, and secured attorneys to help them navigate estate rights and put together a living will. But unfortunately, far too few lawyers intimately understand that process for same-sex couples, meaning many people — especially low-income families — will be back to square one.

But for Heather MacKenzie, the fight is not just about the financial and legal burden that these bills would place on same-sex couples. It’s about ensuring that members of her family are treated as equals.

“It was amazing for me to be able to be added to my first child’s birth certificate,” MacKenzie said. “For me, it’s more than a piece of paper. To me, it’s a sign we’ve made it. We’re being recognized as a family. This child will be very loved, and for somebody to try to pass a bill to take that away from us — and we’ve made it this far — it’s ridiculous.”