Top five most unjust awards: Tales of Oscar outrages past

By its 88th year the Oscars has had plenty of opportunities to get it wrong, here are 5 of the most unfair awards 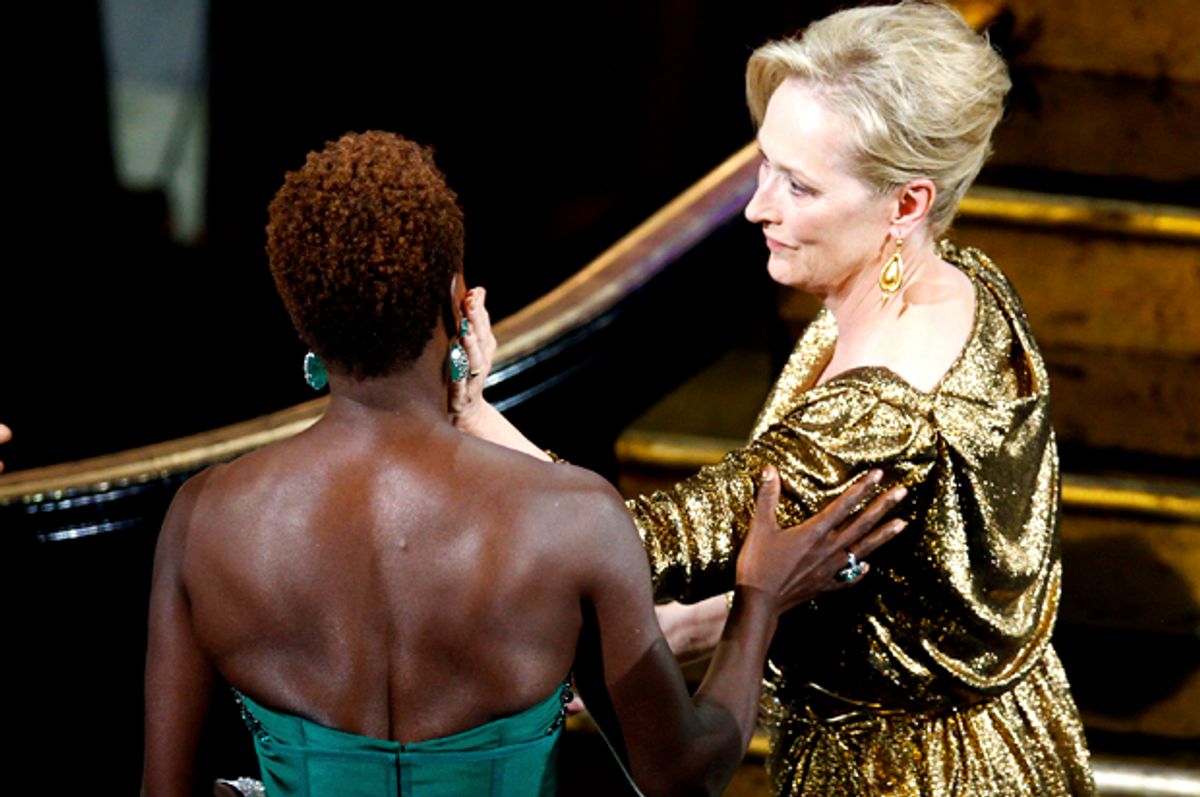 Meryl Streep, winner of the Oscar for best actress for her role in "The Iron Lady" is congratulated by fellow nominee Viola Davis (Reuters/Gary Hershorn)
--

My friend Suzanne’s email invitation to her Oscar party this year opened, “I know, I know, it’s Hollywood BS. . . but it’s BS at its best!” And indeed, there are those folks who think the Oscars are total bullshit. They consider the award to be the real-life equivalent to the Montgomery Burns Award for Outstanding Achievement in the Field of Excellence.

But then there are folks who feel the Oscars do — or at least should — honor the “best” in Motion Pictures. While many deserving filmmakers and actors as well as set and costume designers, special effects artists, animators and other industry folks receive the prestigious statue for their hard work, there are always those shining examples of films and filmmakers that should have won — but didn’t. (Let’s not get into who should have been nominated — but wasn’t.)

Oscar injustices come in every category. As a rabid devotee of short films, I am still pissed PEZ’s 2013 contender “Fresh Guacamole” — which, at 100 seconds, is the shortest nominee in Oscar history — lost to the inferior Disney entry “Paperman.” And yes, I am irked that “Departures,” an overwrought and sentimental Japanese drama “about people” bested the astonishing animated documentary “Waltz with Bashir” as well as the superb French entry “The Class” for best foreign language film in 2008.

But these are minor disappointments in the nearly 90 years of Oscars. I mean, how has Peter O’Toole been nominated eight times and never won, or Glenn Close gone home empty-handed six times? Injustice, indeed.

This weekend, it looks like “La La Land” is going to take home an armful of Academy Awards. And while the film has its detractors, I am not among them. But as much as I thought “La La Land” was “a worthy showcase for the magnificent Emma Stone, who is heartbreaking throughout,” I am rooting for Isabelle Huppert to spoil a “La La Land” streak and win for her phenomenal performance in “Elle.”

And I’m pulling hard for Denzel Washington’s staggering work in “Fences” to spoil Casey Affleck’s chance at collecting the best actor prize for “Manchester by the Sea.”

Looking at who was nominated and who should have won over the years, there are the some egregious errors in Oscar history. Here are the five nominees:

Talk about a sucker punch! Martin Scorsese’s blistering classic, “Raging Bull,” loses to The Sundance Kid’s directorial debut, a tear-jerking adaptation of a soapy family suicide drama. Now, I understand how “Ordinary People” can win Best Picture over the brilliantly edited (by Oscar-winner Thelma Schoonmaker) Jake LaMotta biopic. And I give credit to Redford for coaxing the dramatic performance he did from Mary Tyler Moore (which earned her a nomination) as well as the fine acting by fellow nominees Judd Hirsch and Timothy Hutton (who won). But beating Scorsese for Best Director? Really?!

“Raging Bull” is regarded as one of the greatest films from the 1980s, and it is ranked 53 on the “Sight and Sound” critics’ poll. “Ordinary People” doesn’t have that kind of stature. But Redford got the statue? Why? What made Redford’s direction special? Because he captured upper-class white suffering well? Because he is a Hollywood Golden Boy? Can anyone justify this?

Scorsese’s film was a knockout in every respect, from the black-and-white cinematography, to Robert De Niro’s shape-shifting performance, the aforementioned editing, the choreography of the iconic fight scenes, the lighting, the costumes, the art direction, the music. Everything! A contest like this is like Billy Wilder’s poignant “The Apartment” taking the prize instead of Alfred Hitchcock’s game-changer “Psycho.” Oh, wait, that happened, too. WTF?!

It’s actually hard to believe Scorsese’s first (of eight) best director nominations was for “Raging Bull” and not “Taxi Driver,” or even “Alice Doesn’t Live Here Anymore.” It took Scorsese decades to finally win an Oscar, and when he did, it was for “The Departed,” which was hardly his “best” film.

Redford, however, later understood what it means to have one’s thunder stolen. After all, his outstanding work helming “Quiz Show” lost to Robert Zemeckis and his gimmicky  “Forrest Gump.”

Paul Haggis’ topical ensemble drama about race and class in L.A. certainly pushed some buttons when it was released, but when this wholly mediocre film toppled the more-nominated and favored “Brokeback Mountain,” many people were incensed. Did “Crash” win by accident? How could a manipulative, ham-fisted drama that provoked white liberal guilt pull an upset over Best Director-winning Ang Lee’s sensitive and tragic love story between two cowboys? Were voters — much less viewers — honestly more moved by “Crash”? Was there homophobia in the industry that prompted a “Brokeback” backlash?

It’s hard to know for sure, but over time, Heath Ledger’s remarkable performance (which sadly lost to Philip Seymour Hoffman’s turn as “Capote”) will still be remembered long after “Crash” is forgotten.

Say what you will about Steven Spielberg’s penchant for going sappy, his 20-minute opening sequence in “Saving Private Ryan” was impressive and uncharacteristically unsentimental. But apparently, it wasn’t impressive or unsentimental enough. Or maybe Harvey Weinstein just influenced more Academy members to vote for “Shakespeare in Love.” Regardless, this contest has been considered one of the tightest races in Oscar history, with “Shakespeare” edging out “Ryan” 13 nominations to 11, and seven wins to five.

If dramas generally have an edge at the Awards — think “Gandhi” over “Tootsie” — that wasn’t the case here, and it was a mistake. Certainly the acting prizes helped push “Shakespeare” over the top. Judi Dench earned a Best Supporting Actress statue for her eight minutes of screen time — likely a make-good for the disappointment of her “Mrs. Brown” performance losing to Helen Hunt in “As Good as It Gets” the previous year. Gwyneth Paltrow won a Best Actress Oscar for her turn, beating Cate Blanchett’s “Elizabeth” — criminal! Meanwhile, Tom Hanks’ fine performance in “Ryan” was bested by Roberto Benigni’s more tragic than comic work in “Life Is Beautiful.” Hell, Benigni also defeated three more deserving actors: Ian McKellen for “Gods and Monsters;” Nick Nolte for “Affliction;” and Edward Norton in “American History X.” So there’s considerable injustice this year!

As a general rule (taught to me by friend and fellow film critic Carrie Rickey), it’s not the best acting that wins, but the most acting. This may be why La Streep keeps getting nominated. (She may be the most nominated actor with 20 nods, but she’s also the biggest acting loser, having only won three). I will concede that Streep deserved to win for “Sophie’s Choice” and probably should have won for “Silkwood” (but lost to Shirley McLaine for “Terms of Endearment”). But the glorified actress really did not deserve a prize for her mimicry of Margaret Thatcher in “The Iron Lady.” La Streep was (as I wrote upon release) “shrill” as Thatcher, “giving a histrionic, Oscar-baiting performance that alternates restraint with hamminess.”

Meanwhile, Viola Davis gave a dignified and moving portrayal of a maid experiencing racism in the American South in “The Help.” Granted, “The Help” is a White Savior film, and deliberately feel-good about a shameful subject. And Davis has even recently spoken out about “The Help,” and how some of the best dramatic moments were edited out of the film. But one can feel the strength of those cut scenes in Davis’ nuanced, inspiring performance, which shows the strength of the women like those she portrayed. Thankfully, Davis is expected to win her first Oscar for “Fences” this year, but it would be great if this were her third. After all, Penélope Cruz’s performance in “Vicky Cristina Barcelona” robbed Davis when she was first nominated for “Doubt.”

5. Best original song: Sam Smith and James Napier “Writing’s on the Wall” from “Spectre” beats Lady Gaga and Diane Warren “Til It Happens to You” from “The Hunting Ground”

Last year, the Best Song category upset was so shocking people may have thought the award should have been given based on the performances by the singers on stage Oscar night. Sam Smith struggled to hit some of his high notes in his rendition of “Writing’s on the Wall” from “Spectre.” Meanwhile his competitor, Lady Gaga, brought the house down with her powerful, goosebump-inducing performance of “Til It Happens to You.“ It was an emotionally staggering anthem about rape from the documentary “The Hunting Ground.” Moreover, Lady Gaga had endeared herself to the Academy the previous year when she did a melody from “The Sound of Music” that also received a Standing O.

But when Sam Smith and James Napier’s names were read as winners of the Best Song Oscar, Gaga fans were angry. It was as if Smith had murdered a baby on stage. Making matters worse, Smith added insult to injury in his speech, wrongly stating that no openly gay man had ever won the Oscar. (“Milk” scribe and openly gay Oscar-winner Dustin Lance Black quickly fact-checked him on Twitter). It was a shame that Smith didn’t do a better job of singing or speaking at the Oscars. But for most folks, it was a bigger shame that Lady Gaga went home empty-handed.