Winner by upset: Jimmy Kimmel nails his first Oscar outing but was overshadowed by a fantastic gaffe

Kimmel aced his trial as host, but history will remember this year's epic flub in announcing Oscar's top award 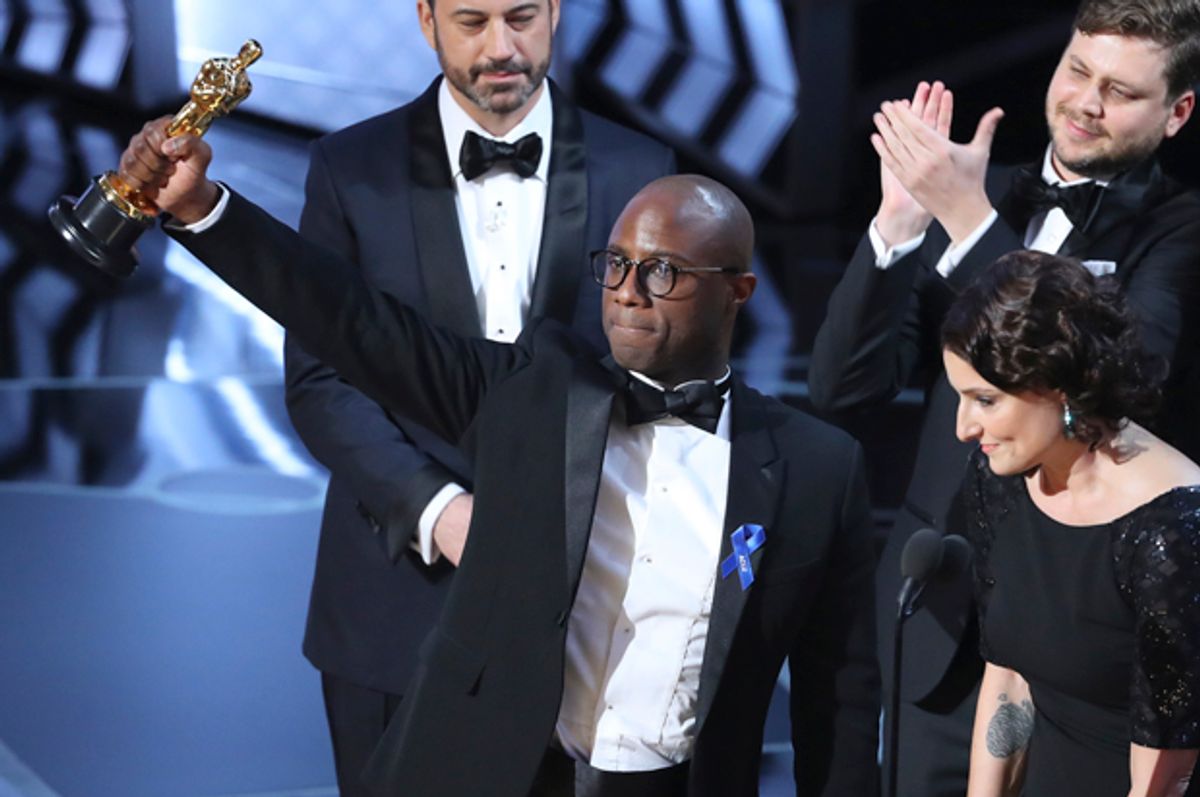 Barry Jenkins of "Moonlight" holds up the Best Picture Oscar at the 89th Academy Awards in Los Angeles. (Reuters/Lucy Nicholson)
--

Before Sunday night’s airing of the 89th Oscars on ABC, I observed that as long as Jimmy Kimmel wasn’t memorable for the wrong reasons, the host would emerge victorious once all was said and done. That he did. Not once did Kimmel commit any egregious errors while fulfilling his hosting obligations. His punchlines landed, and he earned only the mildest of groans during one slightly off joke from which he quickly recovered.

Be that as it may, when people look back on this Oscars show, his performance will rank low on the list of memorable moments.

Mind you, Kimmel helmed what is likely to be an unforgettable Oscar night due to its flubbed finale, which yielded perhaps the most awkward scene in Academy Awards history. The fault for this did not lie with host but with the person had been responsible for putting the envelope for best actress honors into Warren Beatty’s hand before he went onstage to announce the winner for best picture.

Beatty opened the envelope and after a comically extended pause, bemusedly handed the card that was inside to his presenting partner Faye Dunaway, who announced “La La Land” as the winner.

But the best picture winner was “Moonlight.” That is why, mere moments after a producer of “La La Land” thanked his “blue-eyed wife” (no joke), the gaggle of white folks who gave us a sparkly ode to Hollywood musicals somewhat awkwardly ceded the stage to the gaggle of brown folks who had made a sensitive coming-of-age film about a gay African-American man.

And "La La Land" producer Jordan Horowitz, who was more than gracious in smoothing over the mix-up, held up the real card for viewers to see. "This is not a joke, 'Moonlight' has won best picture, " he said.

It's not as if The 89th Oscars’ twist ending was the cap on a show full of surprises; if anything, there were few true upsets at this year’s ceremony. “La La Land” may not have snagged the big prize, but it danced away with six Oscars, including the best actress award for Emma Stone and best director honors for Damien Chazelle who, at 32, became the youngest winner in that category,

Much of the evening progressed like that, with category favorites coming up golden and making history in doing so. “Moonlight” won three Oscars, including Mahershala Ali’s win for best supporting actor. Viola Davis also won a best supporting actress Oscar for her work in “Fences.”

When considering the best documentary feature award granted to “O.J.: Made in America,” made by director Ezra Edelman and the best adapted screenplay Oscar for “Moonlight,” written by Barry Jenkins and Tarell Alvin McCraney, this Academy Awards set a record for the most African-American winners in a single year. Ali made additional history by becoming the first Muslim actor to win an Oscar.

This amounts to several knocks on the #OscarsSoWhite narrative that has dogged the Academy of Motion Picture Arts and Sciences for the last two years.

Then again, if the battles in major categories serve as a barometer, Casey Affleck’s best actor win for “Manchester by the Sea” is a reminder that this is still in an era in which entitlement and nepotism rule. Affleck bested Denzel Washington, who starred and directed in “Fences;” the look on Washington's face when Affleck’s name was read speaks as forcefully as any of August Wilson's tautest phrases.

This is me every time I hear Casey Affleck talk. I can't even imagine how the fuck Denzel feels here. It's raw AF, whatever it is. #Oscars pic.twitter.com/WjN7vkyBAj

True to predictions, too, were the pointed politics on display at this Oscars. Kimmel didn’t shy away from digs at President Donald Trump as much as one might have thought. He also struck the right balance, however, between landing punchlines about the Cheeto-in-charge and satirizing Hollywood’s self-congratulatory spectacle.

Breaking form from previous Academy Awards telecasts, the evening opened with Justin Timberlake performing “Can’t Stop the Feeling,” his Oscar-nominated song from “Trolls,” feathering the nest before Kimmel officially got the evening rolling with nearly 10 minutes’ worth of soft spiky jokes.

“This is being watched live by millions of people in 225 countries that now hate us,” he deadpanned, later adding, “I want to say thank you to President Trump. I mean, remember last year when it seemed like the Oscars were racist? That’s gone, thanks to him.”

Later he lampooned Trump’s post-Globes tweet with an extended riff about Meryl Streep’s “many uninspiring and overrated performances.”

Kimmel continued, “From her mediocre early work in ‘The Deer Hunter’ and ‘Out of Africa’ to her underwhelming performances in ‘Kramer vs. Kramer’ and ‘Sophie’s Choice,’ Meryl Streep has phoned it in for more than 50 films over the course of her lackluster career.” He asked Streep to stand for “a totally undeserved round of applause” and asking if her dress was an Ivanka.

That’s about as direct of a hit the host made over the course of the telecast’s three hours and 49 minutes, other than tweeting #Merylsayshi to the POTUS about midway through the telecast.

Otherwise Kimmel worked within his wheelhouse, gently ribbing the nominees without profoundly offending anyone. He and Matt Damon played with their faux feud throughout the night. Viewers familiar with “Jimmy Kimmel Live!” probably expected nothing less. Like the special Oscars edition of “Mean Tweets,” however, it was a weak brew. (Kimmel likely is saving the saltiest tweets for his late-night show.)

Similarly, an interlude involving bringing in an unsuspecting bus full of tourists was to the Oscars what Kimmel's PB&J-sandwiches-made-by-his-mom gag was to the Emmys; he meant well, but the longer it dragged on, the less one appreciated the gesture.

All this was part of Kimmel’s crowd-pleasing style. Obviously he sought to make the Oscars telecast an Academy Awards for We the People, both celebrities and the common folk. True, some of his comedy could be viewed as polarizing. On the other hand, the producers made movie candy, cookies and doughnuts rain down from the rafters. Liberal, conservative, Democrat, Republican — who can argue with the healing power of butter and sugar?

Much of the commentary was reflected in the academy voters' selected winners, including Orlando von Einsiedel and Joanna Natasegara, whose entry “The White Helmets” won best documentary short. They were present to accept, but the louder statement was the absence of cinematographer Khaled Khatib and Raed Saleh, the leader the Syrian Civil Defense, the film’s main subject. Khatib and Saleh had obtained U.S. visas to attend the ceremony, but the Syrian government had canceled Khatib’s passport.

Meanwhile Saleh did not attend because “intense air strikes across the country mean he must focus on work inside Syria,” according to a statement from his organization.

The more widely known news from the Middle East was director Asghar Farhadi's polite refusal to attend, which was highlighted by the win for his film “The Salesman” in the best foreign film category. Anousheh Ansari, the first Iranian to go into space, accepted on his behalf and read a statement from the director.

“My absence is out of respect for the people of my country, and those of the other six nations who have been disrespected by the inhumane law that bans entry of immigrants to the U.S.,” he said. “Dividing the world into the U.S. and our enemies creates fear. . . [filmmakers] create empathy between us and others — an empathy which we need today more than ever.”

As if Hollywood took its cues from Streep’s Golden Globes speech, many of the most powerful statements were made without naming the president. A number of stars had donned blue ribbons in a show of support for the American Civil Liberties Union. Director Ava DuVernay wore a dress by Ashi Studio, a design house based in Lebanon.

Wordless statements abounded, but actors were outspoken as well. Presenter Gael Garcia Bernal said, “As a Mexican, as a Latin American, as a migrant worker, as a human being, I am against any form of wall that wants to separate us.”

This came before the listing of nominees for best animated feature film, which, admittedly, made for an awkward segue. “Zootopia” won, though, and as co-director Clark Spencer pointed out, it’s a story about the power of tolerance.

A recorded montage of cinephiles from around the world echoed that idea, as each professed an affection for favorite films and explained the way that cinema is a universal language that brings us together. Indeed, the theme of understanding was as central of a theme on Sunday as the event’s various critiques.

Every year the right calls out the Oscars as a symbol of liberal hypocrisy, and that certainly isn’t going to change this time around. Early in his opening monologue, Kimmel admitted to the audience that he isn’t the man to unite this country. But then he also made a suggestion.

“If every person watching this show — I don’t want to get too serious, but there are millions and millions of people watching right now — and if every one of you took a minute to reach out to one person you disagree with, someone you like, and have a positive, considerate conversation, not as liberals or conservatives, as Americans — if would all do that, we could make America great again,” he said. “We really could. It starts with us.”

Well put, and given the shocking turn of events in Oscar’s closing final moments, also likely to be forgotten. Not that it matters; something tells me Kimmel will be given the chance to take the Oscar stage to say it again next year.