“Moonlight” is the first LGBT movie to win best picture. Here’s why it matters

The Oscars have long recognized movies where LGBT people were props or tropes. "Moonlight" makes us human 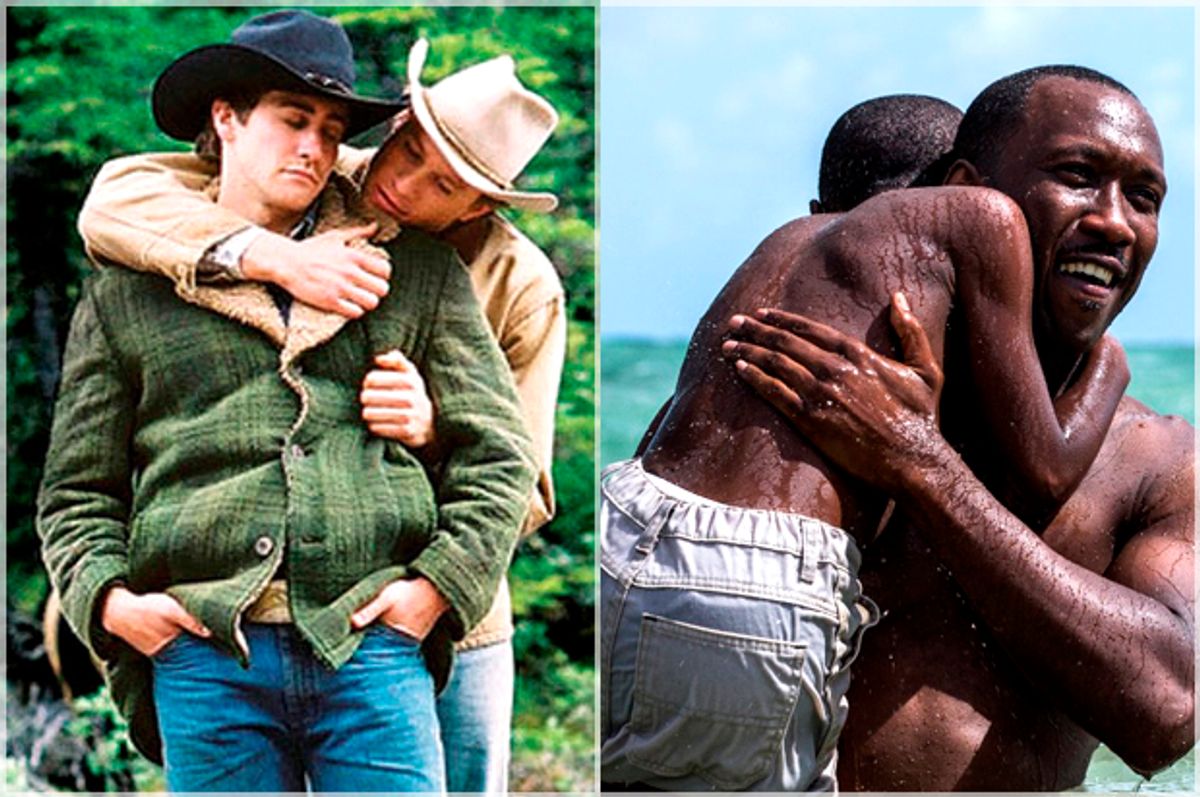 Do you remember where you were when “Brokeback Mountain” lost in the best picture category? It was in 2006, my first year in college, and I was at a crowded Oscar party. When Jack Nicholson read the contents of the envelope, he delivered the news that “Crash” had won with an implied shrug as if to say, “That’s Hollywood, Jake.” Everyone in the room with me was stunned, almost unable to move.

“Brokeback” had been the unbeatable front-runner, a cultural phenomenon that was also critically beloved. It had completed a near sweep during the awards season, winning honors from the British Academy of Film and Television Arts, the Golden Globes and the Critics' Choice Awards. Meanwhile, “Crash” was a race-relations movie so ham-fisted that the opening titles should have been written in bacon.

The “Brokeback” upset wasn’t just unfair. It was a symbol of wretched homophobia (which continues to plague the film industry). Many members of the Academy of Motion Picture Arts and Sciences, including Ernest Borgnine, refused to even watch Ang Lee’s mournful cowboy ballad. Tony Curtis opined that John Wayne, über-masculine patron saint of the Western genre, wouldn’t approve.

It’s perhaps fitting that the restitution for that film’s shocking loss would be just as jaw-dropping. A decade or so after “Brokeback Mountain” was denied the opportunity to become the first LGBT movie to win best picture, “Moonlight” snatched victory from the jaws of tapping feet. Although presenter Faye Dunaway initially proclaimed “La La Land” the winner, she had read from the wrong envelope. As Warren Beatty, who stood onstage with his “Bonnie and Clyde” co-star to commemorate the film’s 50th anniversary, explained, the two had been given a card announcing Emma Stone’s best actress win by mistake. The 28-year-old won her first Oscar for starring in the modern musical, which was heavily favored to sweep the ceremony.

That unbelievable gaffe has dominated the day-after headlines, but don’t let the controversy overshadow what is an important milestone: No movie with an LGBT protagonist has ever claimed the best picture prize, and few have even been considered for the honor. The well-deserved win for “Moonlight” is a necessary step toward inclusion for an awards show that has struggled to treat queer art as having the same importance and relevance as its competition. This is not just about diversity, a perennially hot topic at the Oscars. It’s about equal recognition.

Just a handful of LGBT-themed films have ever competed for top honors at the Academy Awards. These films include “Milk,” “Dog Day Afternoon,” “The Hours,” “The Kids Are All Right” and “Capote.” Last year Todd Haynes’ “Carol” was snubbed in the category, despite earning nominations for both its leads and a bid for best screenplay. That film, which earned some of the best reviews of the year, joined a long list of films that have been passed over by the academy. Acclaimed films like “Tangerine,” “Gods and Monsters,” “A Single Man,” “Sunday Bloody Sunday,” “Boys Don’t Cry,” “Philadelphia,” “My Own Private Idaho,” “Beginners,” “Blue Is the Warmest Color,” “Monster” and “Mulholland Drive” failed to earn best picture mentions, even while many of their cast members were nominated in other categories.

The academy loves to give actors shiny trophies for “going gay” in a role, but seldom gives the stories they’re telling the ability to compete at the same level or even recognize queer actors who portray the stories of their own community. To date, 11 straight actors have won an Oscar for playing an LGBT character. But just two out queer people have ever even competed for an acting award at the ceremony: Jaye Davidson (“The Crying Game”) and Sir Ian McKellen (“Gods and Monsters”). Neither won. Actors like Jodie Foster as well as Anna Paquin, was was just 11 when she won the best supporting actress award, came out long after taking home Oscar gold.

When movies with LGBT characters are spotlighted, it’s too rarely in a way that celebrates or affirms the community. Previous best picture contenders include films like “Silence of the Lambs,” “Dallas Buyers Club,” “Rebecca,” “The Crying Game” and “American Beauty,” and three of these won awards. In these films, queer people are deployed as villains, problematic tropes or narrative props that enable heterosexual characters to go on a journey of self-discovery. Rayon (Jared Leto) dies in “Dallas Buyers Club” so a homophobic white dude can learn a lesson about tolerance, whereas Fergus (Stephen Rea) throws up when he learns his girlfriend (Davidson) is transgender in “The Crying Game.”

If your film does have an LGBT lead, it’s a lot easier to win best picture honors if you ignore his or her sexual orientation altogether. The real-life John Nash was likely bisexual or gay, but “A Beautiful Mind” scrubs any mention of the mathematician’s homosexual dalliances. It was rewarded for erasure with four Oscars. In the novel on which John Schlesinger’s “Midnight Cowboy” was based, its protagonist was a conflicted queer hustler. His cinematic counterpart, Joe Buck (Jon Voight), is straight. Joe has one lone encounter with a male client (Bob Balaban), who gives him a very uncomfortable blow job in the back of a darkened movie theater.

There has been a great deal of debate on the subject, but friends of Ron Woodroof, the fun-loving rodeo cowboy played by Matthew McConaughey in “Dallas Buyers Club,” claim he wasn’t the gay basher the movie makes him out to be. Many say he was himself bisexual. The film’s screenwriter, Craig Borten, has contested that, saying that his movie is an accurate depiction of who the HIV-positive man was. “His diagnosis changed him,” Borten told Slate.

Why would movies like these redact their leads’ queerness? It’s because movies starring straight white men about the lives of straight white men play better with Oscar voters, who tend to like movies more when the characters look like them. As of last year, the Los Angeles Times reported that 91 percent of Oscar voters are Caucasian and 76 percent are male; the average member of the Academy of Motion Pictures Arts and Sciences is 63 years old. Since 2011, 65 percent of best picture winners featured protagonists who mirror that exact demographic.

That doesn’t mean that every single one of these white male voters is another Ernest Borgnine or Tony Curtis; there are plenty of queer people in the film industry, after all. But given that people older than 50 are less likely to support LGBT equality than those in other age groups, there are likely more of them than you think. In the past decade, the academy has done little to indicate that it has changed its stripes after the “Brokeback Mountain” fiasco. Just three movies with queer leads have been nominated for best picture since 2006 — one of which, “The Imitation Game,” was criticized for playing down its protagonist’s homosexuality.

By reversing that trend, “Moonlight” testified to what should be a given: Telling queer stories matters. Although many have attempted to explain away this win as merely an anti-Trump vote, that diminishes the singular power of the film’s artistry. “Moonlight,” which is about a young black man coming to terms with his identity, shows us that LGBT stories are universal. Its director, Barry Jenkins, adapted an unproduced stage play by Tarell Alvin McCraney because its world, one of boys struggling to find their place on the streets, was one he knew intimately. McCraney is gay and Jenkins is straight, but Chiron’s story belongs to them both. And last night, the Oscars proved that his story is all of ours.

“Moonlight” may have finally shattered the glass ceiling for queer movies at the Oscars, but the ongoing controversy over #OscarsSoWhite shows that the academy's voters still have a lot of work to do when it comes to recognizing the stories of communities that have been shut out for too long. The academy must continue opening the door wider to ensure the stories of the LGBT people are no longer treated as less deserving — ignored, erased and made invisible.

Last night’s win was well overdue, but boys like Chiron shouldn’t have to wait 11 more years for another shot at recognition.