Profile in cowardice: Donald Trump will take no responsibility for the wave of hate crimes he has inspired

Any correlation between Trump's rhetoric and the hate crime in Kansas is "absurd," White House says. Really? 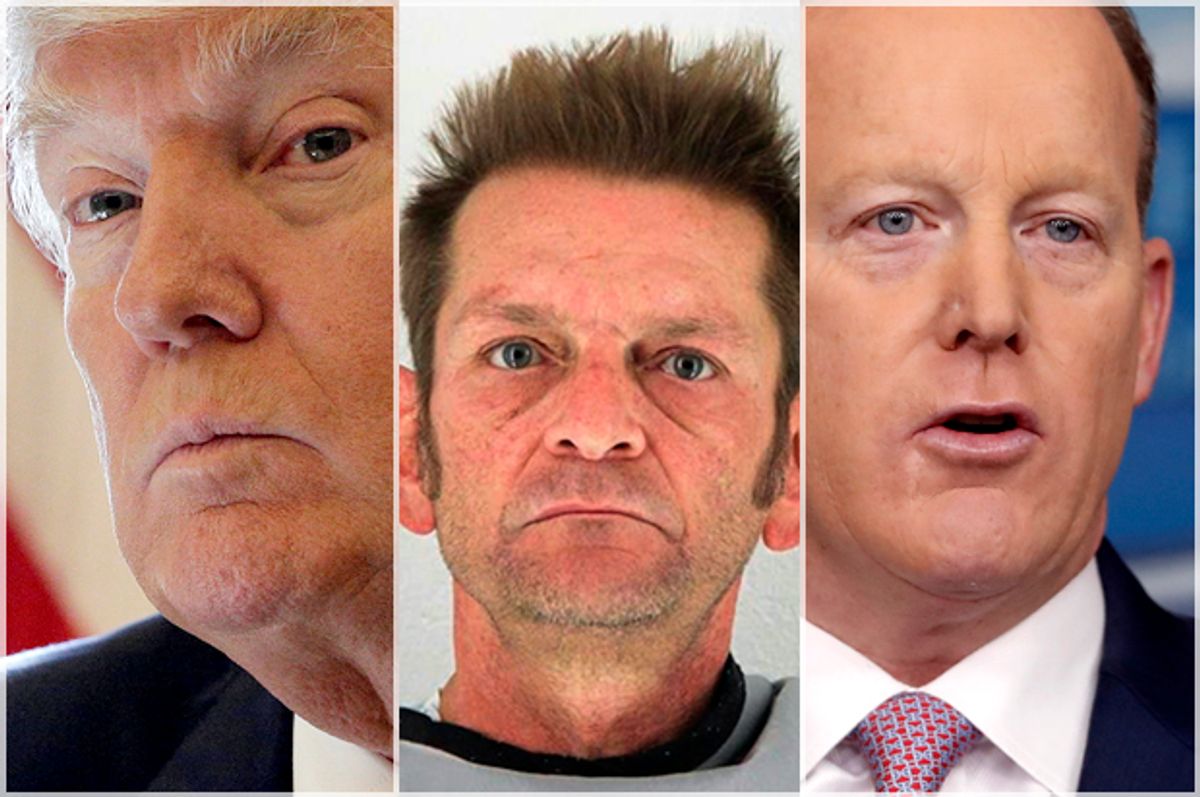 The Trump administration does not believe that white supremacists are "terrorists." As such, it recently decided to shift federal resources away from tracking them.

Rep. Sean Duffy, a Wisconsin Republican and onetime reality-TV star, believes that acts of terrorism committed by white supremacist and right-wing militias are somehow "not the same" as similar acts committed by Islamist groups such as ISIS.

These supposed distinctions did not help save Srinivas Kuchibhotla, an Indian engineer killed in Olathe, Kansas, by Adam Purinton, a white man who apparently believed Kuchibhotla was Iranian. As the Associated Press reported:

According to witnesses, Purinton yelled "get out of my country" at two 32-year-old Indian men, Srinivas Kuchibhotla and Alok Madasani, before he opened fire at Austin's Bar and Grill in the Kansas City suburb on Wednesday evening.

Kuchibhotla was killed and Madasani injured. . . . [The] incident has raised concern about the treatment of immigrants, who feel targeted by President Donald Trump's promises to ban certain travelers, build a wall along the Mexico border and put "America first."

A white man's shooting two people of color whom he told to "get out of my country" is part of a larger pattern.

A white supremacist named Benjamin McDowell was arrested in South Carolina for planning an attack on African-Americans "in the spirit of Dylann Roof."

Jewish synagogues and community centers across the country have been subjected to repeated bomb threats. At least two Jewish cemeteries have also been desecrated.

Mosques have been vandalized and threatened with arson and other violence.

In all, the Southern Poverty Law Ccenter has documented about 900 hate crimes and other acts of intolerance since the November election of Donald Trump as president. This represents a record increase in these types of incidents. When queried about the shooting in Kansas and the broader increase in hate crimes and other violence since Trump's election, White House press secretary Sean Spicer replied, “I mean, obviously, any loss of life is tragic. . . . To suggest that there’s any correlation I think is a bit absurd. So I’m not going to go any further than that.”

Such a response is expected: The Trump administration has made clear that protection of the civil rights of nonwhites and other marginalized groups should not be a federal priority. The administration's lack of apparent concern and outrage about racially and ethnically motivated violence against people of color and immigrants is also a function of the political values shared by its inner circle of policymakers and advisers.

As a group these men appear to believe that the United States should be a white Christian country and that other people are inferior to such "real Americans."

The Trump administration's de facto nonresponse to the wave of hate crimes against nonwhites, Jews and other racial and ethnic minorities since the presidential election also reflects the deep hypocrisy of today's Republican Party and movement conservatives more generally.

Republicans and other conservatives love to claim that they are the country's greatest defenders of the Constitution. In reality, they hold many of its most sacred values in contempt. For example, it is abundantly clear that Donald Trump and the Republican Party have no use for the 14th Amendment and its declaration (with my bolding added):

If Donald Trump and the Republican Party actually believed in the Constitution, they would ensure that gays, lesbians and transgender people would be able to marry and use public facilities without fear of violence or harassment.

If Donald Trump and the Republican Party actually believed in the Constitution, they would want to stop police abuse and thuggery against African-Americans, Latinos, First Nations people and other vulnerable populations.

If Donald Trump and the Republican Party actually believed in the Constitution, they would not single out Muslims for profiling, travel bans and other violations of their human rights and dignity.

If Donald Trump and the Republican Party actually believed in the Constitution, they would not seek to deny women the right to make their own reproductive and other health choices.

If Donald Trump and the Republican Party actually believed in the Constitution, they would not threaten entire communities of people with mass deportation and arrest.

Harry Truman was one of America's greatest presidents. On his desk he displayed a famous sign that said: "The buck stops here." By comparison, Trump is a clown king, demagogue and serial liar who evades personal responsibility for his actions.

Here's a plain and uncomfortable fact: Adam Purinton and others like him are doing nothing more than following through on the spirit and words of Donald Trump's xenophobia, nativism and racism.

As the number of hate crimes increase and Trump's human deplorables spill more blood in the street, Trump will inevitably trot out his mouthpiece Sean Spicer who will lie on command and tell the American people that there's nothing to see here. This is not a profile in presidential courage but a study in cowardice, bigotry and racism. This is the president the American people now have. Unfortunately, it is the president many of us deserve.