WATCH: Tucker Carlson calls Bill Nye a science "popularizer," says he "does a disservice to science"

The interview, supposedly about climate change, quickly went off the rails 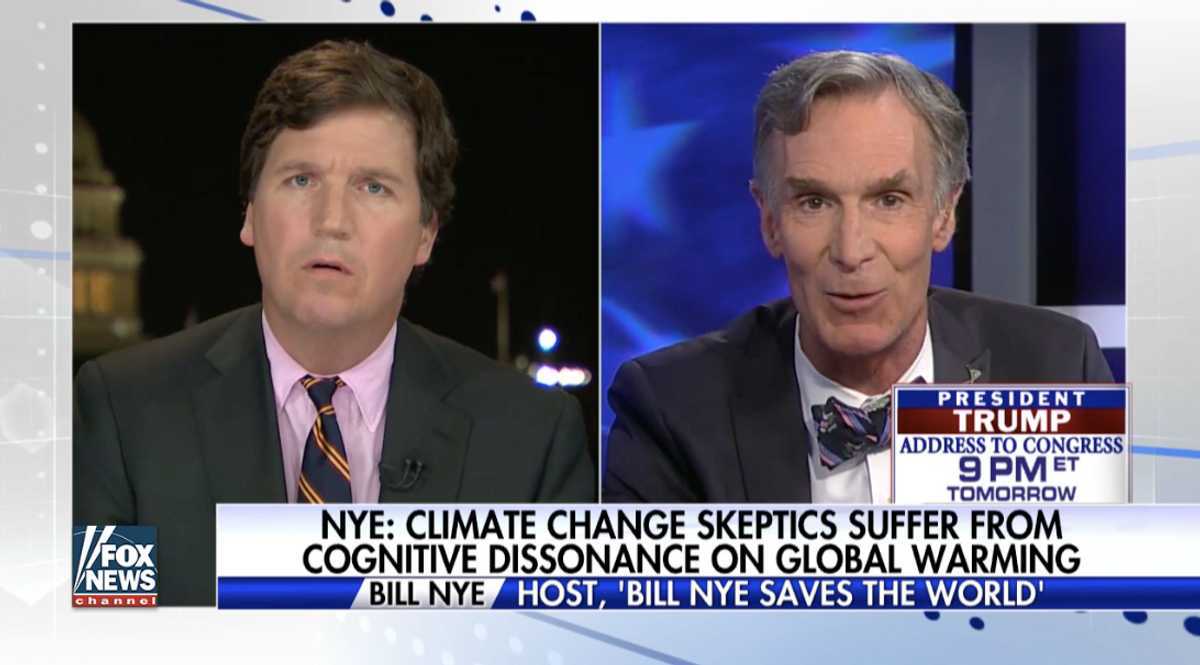 On Monday night Tucker Carlson invited Bill Nye on his show, "Tucker Carlson Tonight," to discuss mankind's contribution to climate change. The interview quickly ran off the rails, however, and ended with an absurd statement from Carlson: "I am open-minded and you are not."

The thrust of their debate surrounded the degree to which human activity has caused global warming. Carlson peppered Nye with hypothetical questions about the state of the climate without human interference. Nye repeatedly assured Carlson that the planet would be substantially different right now if it were not for the industrial revolution.

"The speed that climate change is happening is caused by humans. Instead of happening on timescales of millions of years or, let's say, 15,000 years, it's happening on the timescale of decades," Nye said.

Unsatisfied with this answer, Carlson asked: "How long would it have taken for the planet to reach this level of warmth?"

"It's not clear that it would have happened," Nye responded. "In other words, humans have changed the climate so drastically we have almost certainly avoided another ice age."

Nye asserted that the rate of climate change has been "catastrophically fast" and that the planet should be the same as it was back in 1750.

At that point in the interview, Carlson was more concerned with Nye's condescension towards climate change skeptics.

"I am not in anyway denying that the climate is changing," Carlson said. "I am utterly open to the possibility that the change is caused by man's activity. I am merely calling into question your claim that all of this is settled — that we know precisely what is happening and why and that anyone who asks pointed questions about it is a denier and ought to be imprisoned or shouted off the stage."

That's when things became personal. Carlson claimed that Nye was "not a scientist" and was merely a "popularizer." (Nye has a bachelor's degree in mechanical engineering and is a guest-lecturer at Cornell University where he teaches intro-level courses on human ecology and astronomy.)

"You prevent people from having an honest conversation," Carlson continued his attack. "You are doing a great disservice to science, don't you think that?"

Nye insisted that he was trying to answer Carlson's questions, but the Fox News host was not listening. Carlson then tried to argue that the science community does not actually have the answers.

"So much of this is you do not know," he said. "You pretend to know, but you don't know and you bully people who ask you questions."