Donald Trump, pseudo-president: Media embraces his latest "pivot" like the proverbial drunk under a streetlight 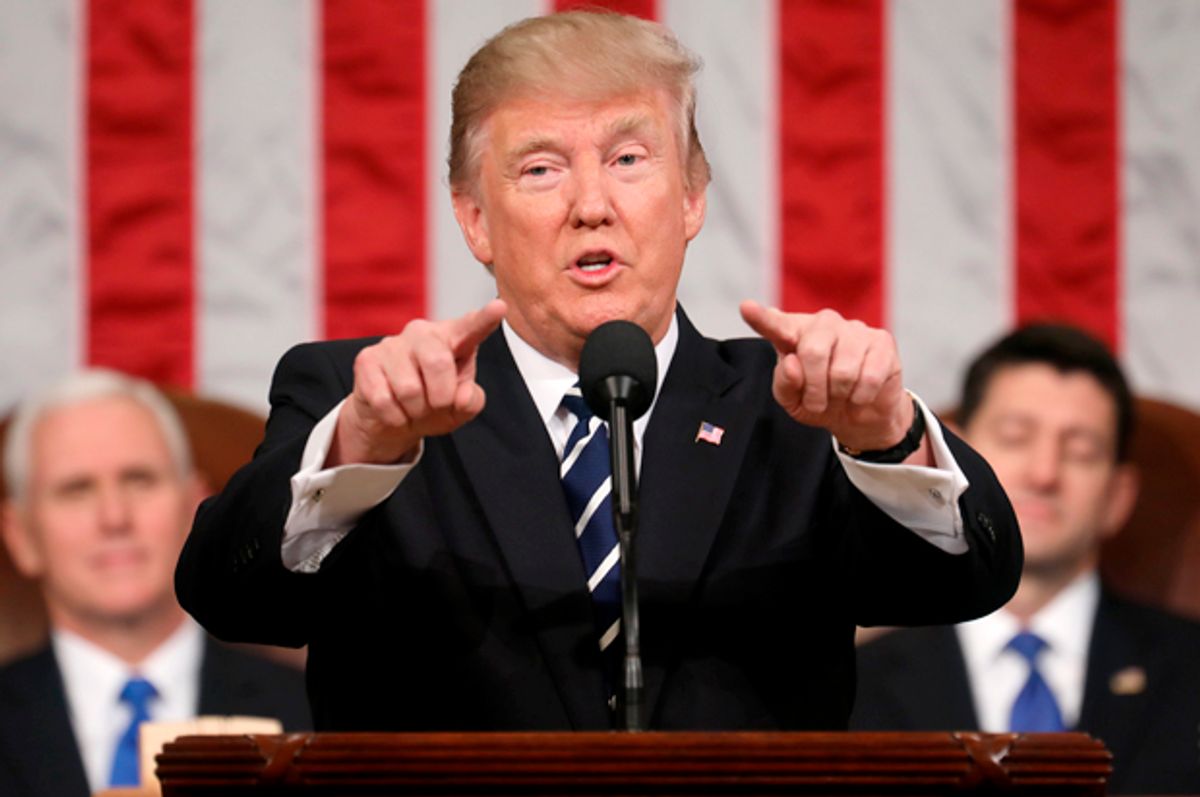 You have probably heard some version of the following story. A cop is walking his beat and sees a drunk guy on his knees, crawling around under a streetlight on the ground. The cop asks the man what he is doing. The drunk replies, "I'm looking for my keys." The cop asks, "Where did you lose them?" The drunk points across the street to a dark alley and says, "Over there." The cop asks, "OK, so why are you looking for them over here?" The drunk responds, "Because the light's better."

Old habits and impaired thinking lead to a suboptimal outcome.

In the age of President Donald Trump, too many members of the American news media have acted like the drunk searching for his or her keys under the streetlight. They are looking for answers in all the wrong places.

During the 2016 presidential campaign, the American news media gave Trump at least $3 billion worth of free coverage. His buffoonery and boorishness were good for advertising revenues. Throughout those months, the media desperately awaited Trump's "pivot" to the "mainstream." This moment never came. Instead, Trump doubled and then tripled down on his reality-show professional wrestling shtick and right-wing extremism to win the White House.

Both during his campaign and following his election, the mainstream media desperately tried to normalize Donald Trump and his fascist and authoritarian leanings. Its old models of "fairness," "objectivity" and "balance" proved unable to describe the strategy of a man who has no regard for the traditional norms and values of American democracy.

But for a moment, it seemed as if some members of the news media had regained their political sobriety. When Trump recently described the press as "enemies" of the American people, it pushed back against Donald Trump's lies and tried to act as a check on his demagogic power by calling attention to his administration's many questionable and problematic ties to Russian President Vladimir Putin's regime.

There are also stalwart and indefatigable reporters and opinion writers who have persisted in calling attention to Trump's many lies and willful obfuscations of reality. Some members of the Beltway news media even appear willing to sacrifice access to Trump's administration by asking him and his representatives direct questions about their troubled relationship with the truth, recklessness and apparent disregard for standing norms of governance, professionalism and civility.

Sadly, it appears that after Trump's speech before Congress on Tuesday night, many members of the supposedly liberal media and chattering class have once again lost their moorings and are declaring that our accidental president has finally become "presidential." They are once again political drunks, looking for their keys under the nearest streetlight.

Here are several examples drawn from the tour de force of lying and deception that Trump performed on Tuesday.

Apparently, Trump was "presidential" while insisting that "illegal immigrants" are a plague upon the land who commit a disproportionate amount of crime. In reality, this population contributes greatly to the American economy and commits much less crime than native-born citizens.

Apparently, Trump was "presidential" by voicing half-hearted concerns about the wave of anti-Semitism and racism that has spread across the United States following his election. In reality, Donald Trump had encouraged and given permission for such bigotry, prejudice and racism, in both word and deed. Of course Trump stood mute on the specific violence and hate crimes being directed at Muslims in the United States.

Apparently, Trump was "presidential" by misrepresenting and distorting the state of the American economy by claiming that tens of millions of people are out of work and cannot find employment. In reality, the American economy is near the level that economists consider "full employment." The figure that Trump references includes retired people, students, people not seeking full-time employment and those too young to work.

Apparently, Donald Trump was "presidential" when he claimed that the Affordable Care Act was a disaster. In reality, President Barack Obama's health care reforms are extremely popular, have helped to grow the economy, increased the rates of insurance coverage for many millions of Americans, saved tens of thousands of lives, improved the health of the public and saved many families from financial ruin.

Apparently, Donald Trump was "presidential" when he grossly exaggerated the number of jobs that have been saved by his supposed negotiations with American companies and claimed success for Obama's economy.

Apparently, Donald Trump was "presidential" when he proclaimed that "illegal immigrants" who have allegedly committed crimes will have their names featured on a public list. This is an invitation to violence and vigilantism and a modern form of the scarlet letter or the pillory.

Apparently, Donald Trump was "presidential" when, in a macabre and disgusting spectacle, he used the wife of a dead U.S. Navy SEAL named Ryan Owens as a human prop and then falsely stated that his botched covert mission in Yemen — in which Owens was killed — resulted in the gathering of critical intelligence information.

The Republicans in attendance at Trump's congressional speech last night clapped like parents who are relieved that their 8-year-old is finally potty trained and has stopped soiling the floor. Too many members of the so-called liberal media are joining them in jubilation and relief that Donald Trump finally looked vaguely "presidential." These observations speak to how low the standards have been set for his entire presidency.

Matters are far worse than previously imagined. In a not-too-distant future people will tell their grandchildren what it was like to watch in real time the decline and collapse of the American empire and the principle of American exceptionalism under President Donald Trump, the child king, demagogue and embodiment of white male privilege and mediocrity who has been given a stage before all the world.