Donald Trump wants to run the government as a business. But he's never been any good at that either

The premise has a few flaws: The two arenas have little in common. And Trump has always been terrible at business 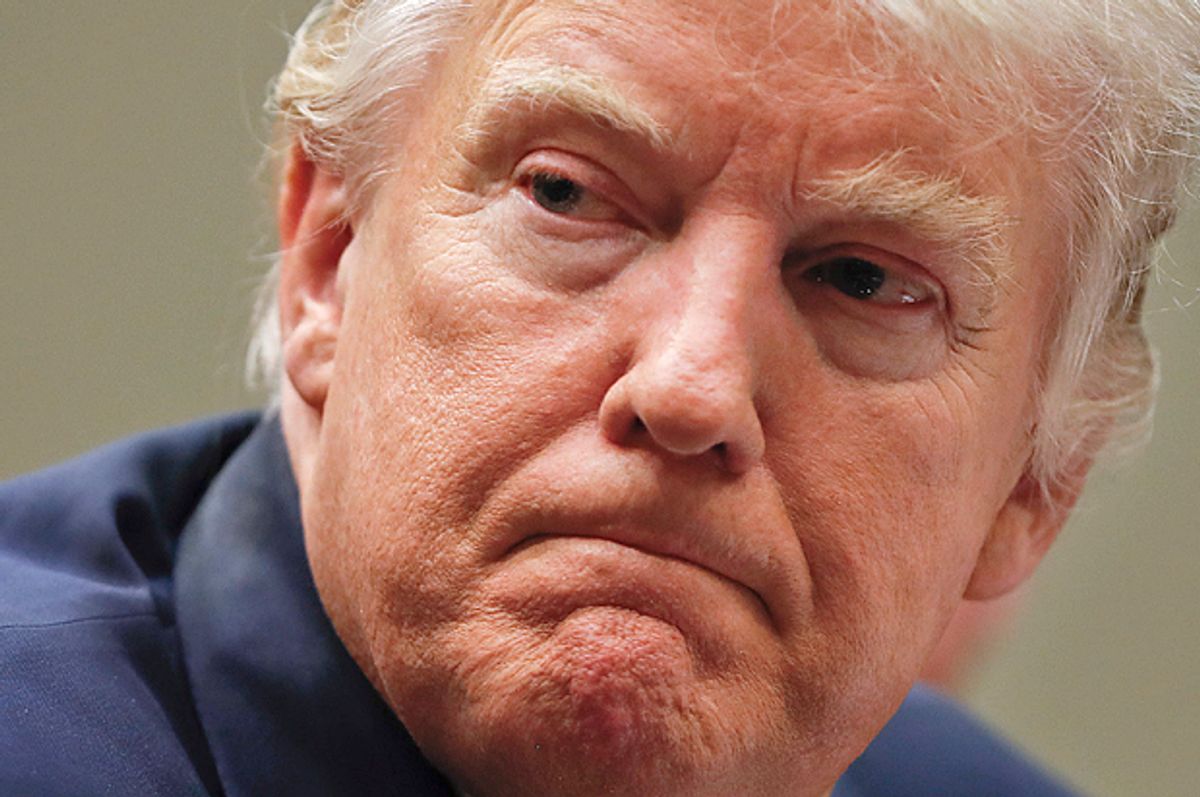 Tuesday night's big speech by President Donald Trump to the joint session of Congress was yet another in the series of disorienting and surreal spectacles over the last year and a half that make you blink your eyes and pinch yourself to ensure you aren't dreaming. You shake your head and mutter under your breath, "Yes, Donald Trump really is our president."

Since Trump has so much trouble telling the truth and makes conflicting comments to different people every day, it's a waste of energy discussing the policies he laid out in the speech. His actions are the only way to determine his real agenda, so one has to evaluate these events as performances.

As Bill Maher said on MSNBC, the president was "Teleprompter Trump" on Tuesday night. That means he was tolerably disciplined and semi-articulate, reading a speech written by others. This particular performance style always compels media outlets to declare his tone "moderate" and "measured." Some said Trump has finally "pivoted" to a more presidential demeanor. They were enthusiastic enough about this speech that Trump may even stop tweeting insults about them for a few days. All in all, it was a good night for the president.

Trump is basically an entertainer and a pitchman, so these events play to his talents, such as they are. A formal speech isn't his favorite venue to sell his wares, of course. He loves his rallies where he can rant spontaneously on whatever topic takes his fancy and his cult followers cheer wildly. Their worship is like air to him. His second preference as president is the photo op. I don't think any president in history has ever held more of them and imparted less substance while doing so. George W. Bush's adviser Karl Rove always said that "politics is TV with the sound turned off," and it appears that Trump took him literally.

But no matter how well Trump manages to keep up the sales spiel, the fact is that he is the president and it's a bigger job than pitching steaks and cheap perfume. Since he allegedly ran a billion-dollar empire, he was supposed to be a high-powered executive with supernatural management talents. As Al Jazeera and many other news organizations reported throughout the campaign, for many of his followers that was the biggest attraction. For instance, this quote in USA Today is entirely typical of the Trump voter:

"He knows how to run a business, he knows how economies should work and he knows how to hire the right people to get the job done instead of thinking he knows best on everything. He speaks his mind, he doesn’t bow to political correctness and he’s honest.”

Well, he does speak his mind.
Trump played a successful entrepreneur on his reality show for many years and that's been a big part of his image. But it's also true that Republicans have extolled the virtues of the businessman as leader for many years, often making the point that the government should be run like a business because it would be more efficient. But that's faith-based market worship, not reality. Government is not a business and while some of the lessons one might learn in business could be applicable to running the government, the duties of governing, especially at the highest level, are much more complex than those of running even the largest industries. The problems, the mission and the constituencies are so different that the skills required for the job have much more to do with general temperament and intelligence than executive experience.
This doesn't mean business experience is of no value. It does mean that that a business executive can't run the country the same way he or she ran a business. It's a different organizational structure altogether.
Donald Trump is actually running the country like his business. He appears to believe that he's the CEO of America and everyone in the government answers to him. This is why his administration doesn't think twice about enlisting the FBI and members of the congressional intelligence committees to do damage control or about insulting the independent judiciary and the press when they fail to do his bidding. (Did Trump even know the president can't fire federal judges?) Trump appears to think that being president means he's everyone's boss.
But that doesn't explain the White House chaos of these first weeks, with all the leaks and missteps and infighting. Even though the government isn't a business and the president's job is very different than a corporate executive's, if Trump were actually a skilled executive, as he so often claims, he should at least be able to manage the White House staff.

An article in Politico by Michael Kruse sheds light on that issue: Donald Trump isn't just making the mistake of trying to run the government like a business; Donald Trump is also a terrible businessman. According to Bruce Nobles, who was president of the defunct Trump Shuttle airline in the 1980s, Trump is a "performance artist pretending to be a great manager."

Nobles had been involved with some big organizations and remarked to a reporter at the time that he was surprised at what "a family-type operation" the Trump airline had, "instead of a business kind of orientation where there is a structure and there is a chain of command and there is delegation of authority and responsibility."

Trump had greatly overpaid for the airline with borrowed cash, and Nobles observed that Trump was much more concerned with the superficial image of the business than the actual nuts and bolts of running it. Trump's airline failed as did all his casinos, which he ran based on highly eccentric notions of business management.

Kruse quotes Trump biographer Tim O'Brien, who said, “I don’t think there’s anything of scale that he’s had his hands on that he hasn’t made a hash of.” Biographer Gwenda Blair noted, “Ramping up is something he’s maybe not so good at.”

Trump famously crashed and burned in the '90s and found his feet again only when he went into the branding business where he could take advantage of his one indisputable talent: self-promotion. He is very, very good at that and it got him all the way to the White House. But these first weeks have illustrated in living color that he's brought to the presidency the notoriously poor management skills that led to one disastrous business failure after another.

Can Donald Trump actually change? Who knows. But it seems unlikely. As biographer O'Brien told Politico, "This isn’t just about a modest course correction. This is about getting an entire personality transplant." If only that were possible.