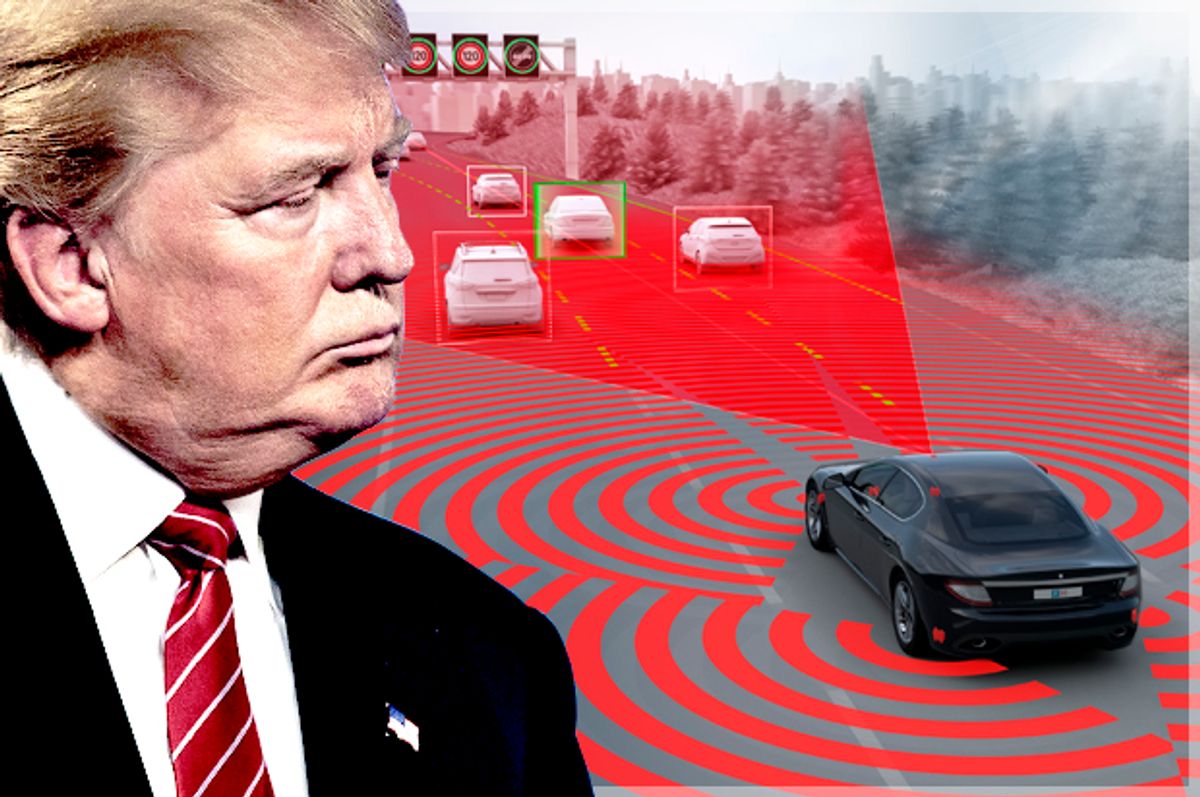 President Donald Trump has made repairing the country’s infrastructure — without spending taxpayer money to do it — a major focus of his administration. His proposal is to steer away from the traditional role the government has played in underwriting upgrades to the nation’s roads, bridges, water systems and other important public features.

“We’re going to rebuild our infrastructure, which will become, by the way, second to none,” Trump said during his victory speech on election night.

He is proposed triggering $1 trillion in private sector-funded infrastructure spending over a decade through $140 billion in tax credits to the companies willing to step forward to do the work. The money lost to tax credits, the president claims, would be recouped from the additional tax revenue generated by the work.

Yet Trump has not discussed a federal government role for leveraging smart technologies for the nation’s flagging infrastructure. Developing a "smart infrastructure" would include things like setting up connected streetlights that monitor and smooth the flow of traffic, sensor-based systems to monitor water mains in real time and software to compile the massive amount of data collected from transportation and other complex systems.

“If I were advising Trump, I would steer him toward tax credits for the most intelligent infrastructure in a way that we promote energy savings,” Patrick Moorhead, principal analyst of Austin-based technology-focused firm Moor Insights and Strategy, told Salon in an email. “The government’s role is to reward cities and businesses for initiating and rolling out the smartest infrastructure.”

Proponents of technological innovation argue that introducing smart-infrastructure technologies should not just be a side note but rather the main focus of any public infrastructure development plan.

“What I would like the Trump administration to do is prioritize smart infrastructure over inert infrastructure,” Robert Atkinson, founder and president of the Washington-based nonprofit Information Technology and Innovation Foundation, told Salon. “In other words, really make a signal shift toward making sure that U.S. infrastructure, including transportation infrastructure and urban infrastructure in general, has intelligence built into it.”

Take what happened after an interstate-highway bridge over the Mississippi River in Minneapolis collapsed in 2007, killing 13 people and injuring 145 others. Instead of the government simply replacing the bridge, the structure was rebuilt with sophisticated sensors that monitor structural conditions in real time, relaying the data to a computer network that can identify and monitor small cracks in the structure before they become big ones.

The installation of one of the country’s first “smart” bridges was a product of publicly funded research and testing by engineers at the University of Maryland and North Carolina State University. And one of these engineers, Mehdi Kalantari from the University of Maryland, wound up founding his own company, Resensys, to make and sell the sensors, showing how public-private cooperation (beyond tax breaks) can lead to more private-sector growth.

Avery Ash, autonomous vehicle market strategist for Washington-based connected car and transportation analysis firm INRIX, said the main focus of Trump’s infrastructure plan should be to prioritize investment in basic infrastructure repair and improvements needed to bring U.S. roads and bridges to parity with those in other advanced global economies.

But when it comes to integrating smart infrastructure, he added, the federal government should also be rigorously establishing national regulations so as to prevent a patchwork of state laws established to fill the void when there's a lack of regulatory momentum at the federal level.

“The federal government’s goal is to promote better, safer and more efficient mobility,” Ash said in an email to Salon. “Historically this has meant leading on projects and services that the market would not or could effectively deliver, establishing standards to facilitate interoperability of national systems, and ensuring basic safety and protections for consumers through effective oversight of the private sector.”

The federal government was beginning to make strides in this regard during the Obama administration, which launched the Smart Cities Initiative in September 2015. The initiative included National Science Foundation grants to research smart city infrastructure development and foster public-private deployment of emerging technologies like data science, machine learning, artificial intelligence and interconnected sensor networks to improve conditions in cities where nearly two-thirds of Americans live. The Obama White House proposed that such investment would help American cities become the "laboratories of innovation," facilitate healthiness, equitable growth and combat climate change. It would also establish a nationwide standard for the systems being developed.

Atkinson suggested that Trump should be focusing some of his efforts toward building on what the Obama administration started: “One thing I would do if I were in the Trump administration is I would designate one or two cities as model cities and really go soup to nuts to make everything intelligent all at once and then see how the different components of the system interact.”

But so far, Trump has remained silent about the federal government’s role in establishing standards and underwriting a high-tech infrastructure that could then be used by the private sector to build apps and other products using it. If Trump's statements about rolling back federal regulations are any indication, the White House may be moving in the opposite direction with a hands-off approach that could wind up slowing the country’s ability to deploy a nationwide smart infrastructure system.