"Before I Fall": A girl’s guide to saving the world

The all-female creative team of a new YA film discusses heroes, zeroes and everything in between 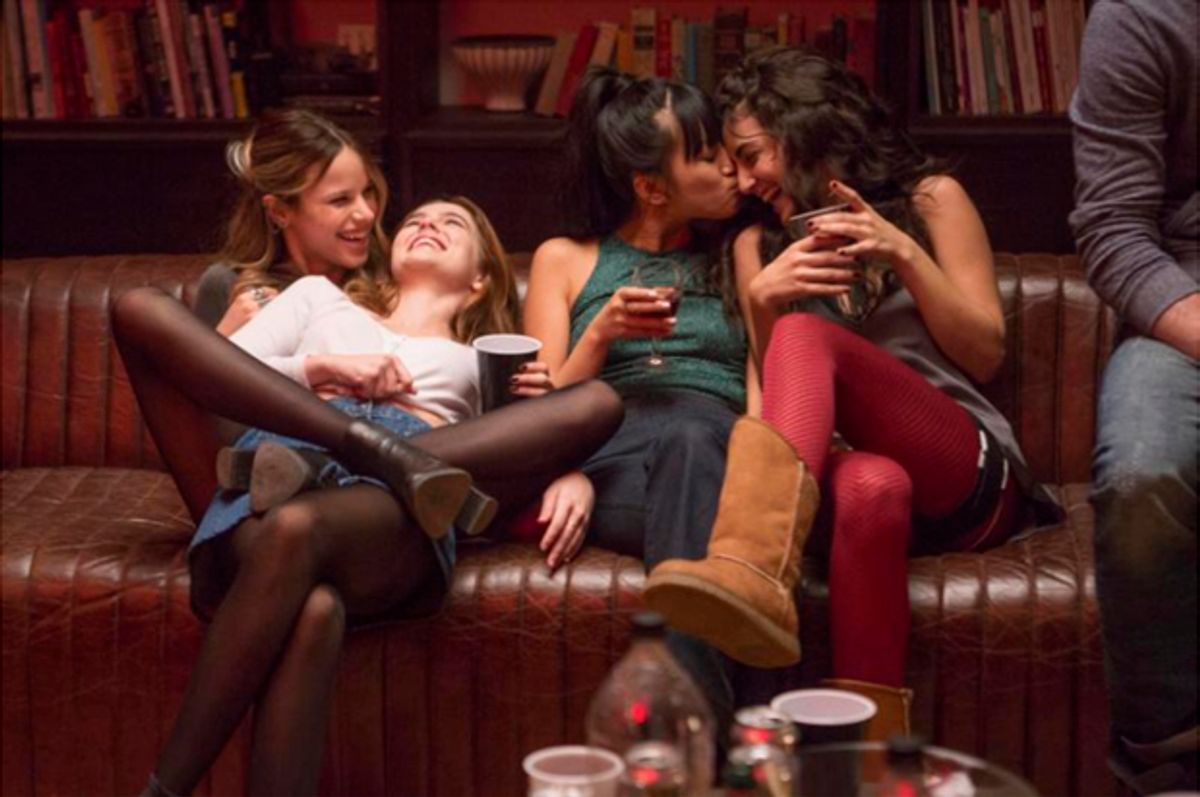 The hero’s journey cuts deeper than a simple narrative template or two hours' worth of light on a wall. Indeed, for those of us with genitals on the inside of our bodies, even a simple trip to the neighborhood multiplex reminds us exactly who wears the power pants when it comes to this time-honored template: Tom Hanks or at best Matt Damon, leading a crew of attractive actors on a spaceship or a submarine or a World War II dingy bound for Normandy. The black water laps against the boat. The bombs drop. The spaceship touches down on a hostile planet.

If you’re lucky there’s maybe some brunette who’s a marine biologist or somebody’s worried wife, pretty AF and saying little or nothing. This is the pulse and proliferation of the Hollywood man myth, working title: GUYS DOING STUFF! It’s what is taught and modeled as we sit chewing our Twizzlers and slurping our Diet Coke. What happens next is we internalize it. We become it. So where does that leave us ladies and what happens to our journeys? How do we really flip the script?

I put these and other essential questions to the creative team of “Before I Fall,” a gripping YA film of Lauren Oliver’s titular best-selling novel, which premieres tomorrow. The story centers on Sam Kingston, a teenage girl who’s forced to relive the same day of her life until she discovers the key to setting herself free from its karmic boomerang. This day includes navigating the usual family-morning dynamic, plus the challenges of something called Cupid Day, whereby the more popular you are at school, the more roses you receive. Next, it’s off to her final house party where she’s maybe going to lose her V and then die tragically in a car accident. As my mother would say, “Vat a day!”

In and around these moribund activities, undulate Sam’s crew, a triumvirate of attractive meanies who, along with Sam, seemingly get their jollies bullying a haunted, frizzy-haired girl whose storyline may or may not hold the key to Sam’s redemption. “You’re pathetic,” the girl informs Sam, before the hot meanies publically pelt her with beer. Suddenly, it’s all too much for Sam — the party, her boyfriend, her friends, even being popular. Should she have intervened on behalf of the girl? For anyone who has ever been bullied, this dilemma, on repeat, has a certain gut-wrenching resonance.

Meantime, director Ry Russo-Young, has set the film in the Pacific Northwest, lending the story a deeply mythical, dreamscape quality replete with lonely winding roads and looming, oozy trees that capture and delineate the shifting mood of each day. The lens has a blurring around the edges that conveys not only a sense of fragility, but also more of this fairy-tale, underworld dreaminess. Think Bettelheim meets Bill Murray if both owned stock in Thinx.

Oliver and I meet up in the cozy lobby of the Smyth in Tribeca. As she rises to meet me, I’m immediately struck by her formidable height and commanding mien. Over 6 feet tall and all limbs in her black leggings and wedge booties, she resembles more of an intergalactic superhero than a self-proclaimed bookish nerd who is also the author of 12 successful novels. I settle into a low-slung sofa and inquire about the “Groundhog’s Day” structure for the story: Why the repeated return to the underworld? What’s that about, I inquire. A lady-smack in the face to the late, great Joseph Campbell?

“It’s not called the heroine’s journey,” Oliver reminds me, laughing. As she does, she warns me she’s going on four hours of sleep. Next she orders an array of beverages: a large Pellegrino, sparkling cider, cappuccino. Nestling into some comfy throw pillows, I can’t help but notice how many sweaters she’s wearing. Three? Four? Also how sharp her focus remains despite her lack of sleep. It’s like having sparking water with Susan Sontag, if Sontag actually liked kids or women or other people. “Sam's journey is one of moral purpose,” she says. “She is discovering sacrifice and purpose. What is then cut short is not her life but the purgatory of seeing one's every action continuously erased.”

Since the gist of our confab is how in film and novels and, well, life, men get to represent the universal while women, especially young ones, are relegated to the dinky and the personal, we both get fired up about why the core story of “Before I Fall” seems to leave a lot of menfolk with their diapers in a bunch. Because nothing upsets ye olde Sacred Monomyth — AKA GUYS DOING STUFF — more than a self-possessed virgin on a universal quest. Who knows what might happen next? Hillary Clinton? Bad!

“You would never see 'No Country for Old Men' and say, ‘This isn’t how men speak,’" Oliver adds. “It’s dehumanizing and de-specific. Why does it suddenly become a movie for everyone because there’s a white male in it?” As I’m pondering this depressing truism, she adds, “Because girls aren’t allowed to confront big questions! Their experience is cordoned off and diminished. We see this over and over again.”

“We do,” I agree. “And it bludgeons the psyche!” We chug our Pellegrino.

One of the many challenges of writing the heroine’s journey as opposed to reconstituting the male Monomyth, and continually projectile barfing it into ravenous foreign markets, is that the very people whose lives are devoted to the Manstory feel compelled to pooh-pooh any work that goes against its proliferation. Maria Maggenti, the screenwriter of “Before I Fall,” blames this on what she calls “societal glaucoma.”

“Women are seen as adjunct to the human experience,” Maggenti says during our subsequent phone chat. “We contort ourselves to make ourselves part of this story and we internalize it. It’s why I could never watch ‘Breaking Bad.’”

The film’s director Ry Russo-Young later says, “Why ‘The Diary of a Teenage Girl’ didn’t get an Oscar nom is absurd. It’s because films about girls are somehow seen as less weighty and not deserving. With Sam and ‘Before I Fall,’ though, you’re really in her head. It’s a hero’s journey in a psychological way. She learns how she behaves actually affects other people, so it’s moral. But it’s also about love and kindness and goodness and not bullying and a true reckoning with oneself. The challenge was to bring the audience along on this journey,” she adds.

“Sam’s not strong at first but she’s complicated and there’s a kind of truthful strength in her vulnerability,” says Zoey Deutch, who gives a nuanced, kaleidoscopic performance as Sam. “She’s complicated and interesting and a real female character. That’s a strong woman. She learned to be her own leader, not in an alpha way, but to take responsibility for her own actions, which is very subtle and human. A lot of deep detail-oriented work went into finding that, the kind of work that’s possible in a film starring, written and directed by women.”

When I ask Russo-Young about Sam’s friends and what, if anything, they learn during the course of this repeated day, she barely misses a beat as she tells me, “Um, nothing? They don’t change. Because they actually live the day only once, remember? Like her boyfriend.”

Unlike most YA narratives, the boyfriend characters in “Before I Fall” are sidelined in deference to Sam’s more important female friendships, including the one with her little sister. These ties form both the external social strata of who Sam thinks she is and the inner mean girl she must untangle if she is to have any chance at redemption. Kinda like life, only in this case, larger and scarier.

“I think female friendships are not often explored with any richness or dimensionality in movies,” Oliver says. “Women are still usually set up as competitors, or as primarily interacting via a triangulated relationship with a boy. Two women vying for the same man's attention, or a wife sparring with her mother-in-law, or two ‘best friends’ whose friendship is primarily competitive, and a contrasting picture of romantic milestones, as in ‘Bridesmaids.’ So often in movies, what we are told is that the relationship of women to men is the primary one; whereas the male buddy comedy shows us that the relationship of man to man is the primary one. This is a complete inversion of reality.”

Later Maggenti says, “Men get to have fights with friends and stay friends. Women have fights and it’s a total loss.” In Sam’s case, however, we see the what ifs writ large from all angles. The fights aren’t so much about boys as about one another, specifically about the outcome for one particular girl whom they’re all bullying to the brink of something very, very awful. She is the radius and diameter of the film’s brutal geometry. Sam’s girlfriends are both the graces and the furies. Whether she can halt their force is a story as old as time, but one that rarely gets told from both sides.

Maggenti concludes with, “When the hero has to save the city, the woman he loves and the woman he left no longer matter. Very few male journeys end up with ‘I love you. Let’s have a baby.’ The point is that he saved the city.”

“The story is a deliberate psych out,” Russo-Young explains. “It plays on your expectations and subverts them. As the movie gets darker, it gets more reassuring about how we live our lives.”

Oliver tugs at the wrist of her cardigan, pulling it over the sleeve of her sweater and the sweater before that, considers another sparkling cider, thinks better of it, then signals for the check. “Look,” she says. “There’s some kind of giving that erodes you but there’s a kind that expands you. I’d like to think that by the time I die, there’s a lateral type of infinity coming.”

She leans forward to reach for her glass. As she does, I close my eyes and try to imagine her infinity.