Justice Dept: Jeff Sessions spoke with Russian ambassador in 2016, told Congress he had no communication with Russia

Democrats are accusing Sessions of "lying under oath," and have called on him to resign 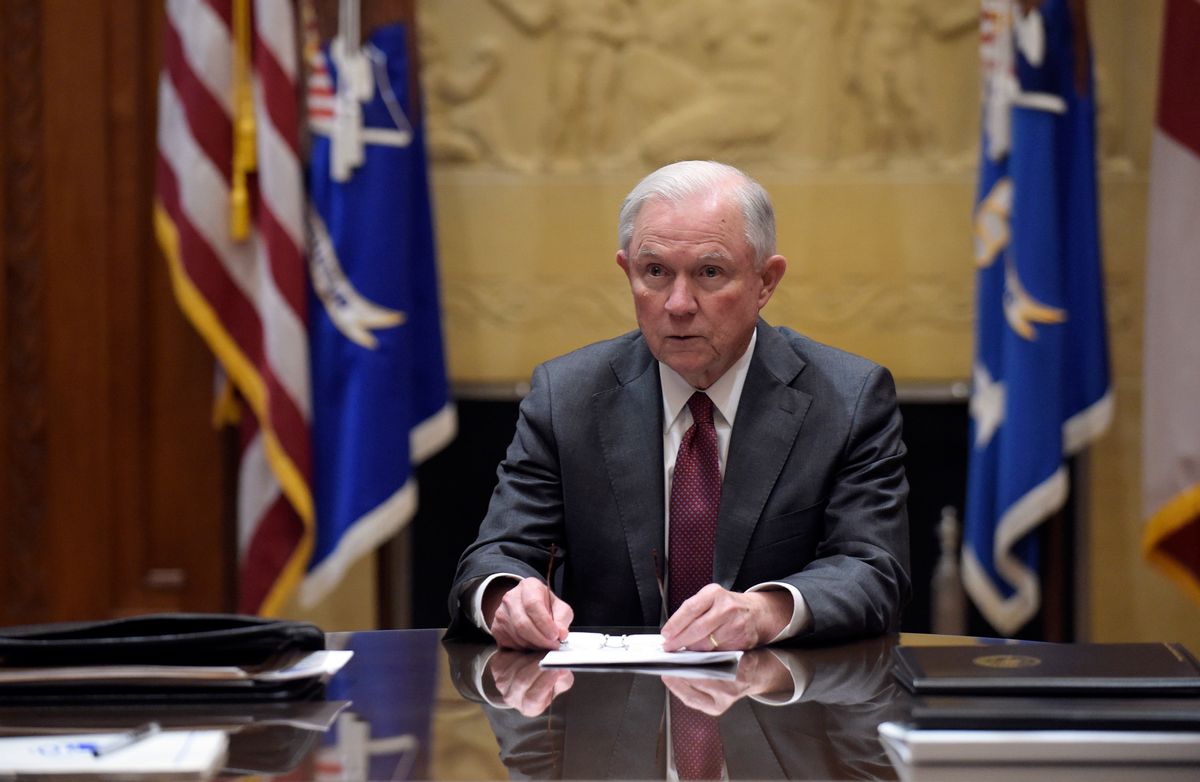 FILE - In this Feb. 9, 2017, file photo, Attorney General Jeff Sessions holds a meeting with the heads of federal law enforcement components at the Department of Justice in Washington. Sessions had two conversations with the Russian ambassador to the United States during the presidential campaign season last year, contact that immediately fueled calls for him to recuse himself from a Justice Department investigation into Russian interference in the election. The Justice Department said Wednesday night, March 1, 2017, that the two conversations took place last year when Sessions was a senator. (AP Photo/Susan Walsh, Pool, File) (AP)
--

WASHINGTON — Attorney General Jeff Sessions talked twice with Russia's ambassador to the United States during the presidential campaign season, communications that spurred calls in Congress for him to recuse himself from a Justice Department investigation into Russian interference in the U.S. election.

Sessions, an early supporter of President Donald Trump and a policy adviser to the Republican candidate, did not disclose those discussions at his confirmation hearing in January when asked what he would do if "anyone affiliated" with the campaign had been in contact with officials of the Russian government.

Sessions replied that he had not had communication with the Russians.

Justice Department spokeswoman Sarah Isgur Flores said Wednesday night that "there was absolutely nothing misleading about his answer."

That statement did not satisfy Democrats, who even before Wednesday had sought his recusal from the ongoing federal investigation and had raised questions about whether he could properly oversee the probe.

House Democratic leader Nancy Pelosi accused Sessions of "lying under oath" and demanded that he resign. Other Democrats called on him to step aside from the investigation.

In a statement late Wednesday, Sessions said, "I never met with any Russian officials to discuss issues of the campaign. I have no idea what this allegation is about. It is false."

Sessions had more than 25 conversations with foreign ambassadors last year in his role as a U.S. senator and senior member of the Armed Services Committee, and had two separate interactions with the Russian ambassador, Sergey Kislyak, the department confirmed.

One was a visit in September in his capacity as a senator, similar to meetings with envoys from Britain, China, Germany and other nations, the department said.

The other occurred in a group setting following a Heritage Foundation speech that Sessions gave during the summer, when several ambassadors — including the Russian ambassador — approached Sessions after the talk as he was leaving the stage.

Revelations of the contacts, first reported by The Washington Post, came amid a disclosure by three administration officials that White House lawyers have instructed aides to Trump to preserve materials that could be connected to Russian meddling in the American political process.

The officials who confirmed that staffers were instructed to comply with preservation-of-materials directions did so on condition of anonymity because they were not authorized to publicly disclose the memo from White House counsel Don McGahn.

On the Sessions revelation, Rep. Adam Schiff of California, the top Democrat on the House Intelligence Committee, said: "If reports are accurate that Attorney General Sessions — a prominent surrogate for Donald Trump — met with Ambassador Kislyak during the campaign, and failed to disclose this fact during his confirmation, it is essential that he recuse himself from any role in the investigation of Trump campaign ties to the Russians."

At the confirmation hearing in January, Sen. Al Franken of Minnesota asked Sessions about allegations of contact between Russia and Trump aides during the 2016 election. He asked Sessions what he would do if there were evidence that anyone from the Trump campaign had been in touch with the Russian government during the campaign.

Sessions replied he was "unaware of those activities."

Then he added: "I have been called a surrogate at a time or two in that campaign and I didn't have, did not have communications with the Russians, and I'm unable to comment on it."

Flores, the Justice Department spokeswoman, said that response was not misleading.

"He was asked during the hearing about communications between Russia and the Trump campaign — not about meetings he took as a senator and a member of the Armed Services Committee," she said in a statement.

Franken said in a statement he was troubled that the new attorney general's response to his question was "at best, misleading." He said he planned to press Sessions on his contact with Russia.

"It's clearer than ever now that the attorney general cannot, in good faith, oversee an investigation at the Department of Justice and the FBI of the Trump-Russia connection, and he must recuse himself immediately," Franken said.

Separately in January, Sen. Patrick Leahy, a Judiciary Committee Democrat, asked Sessions in a written questionnaire whether "he had been in contact with anyone connected to any part of the Russian government about the 2016 election, either before or after election day."