There's no connection between illegal immigration and the crime rate, and Trump's new agency will only sow bigotry 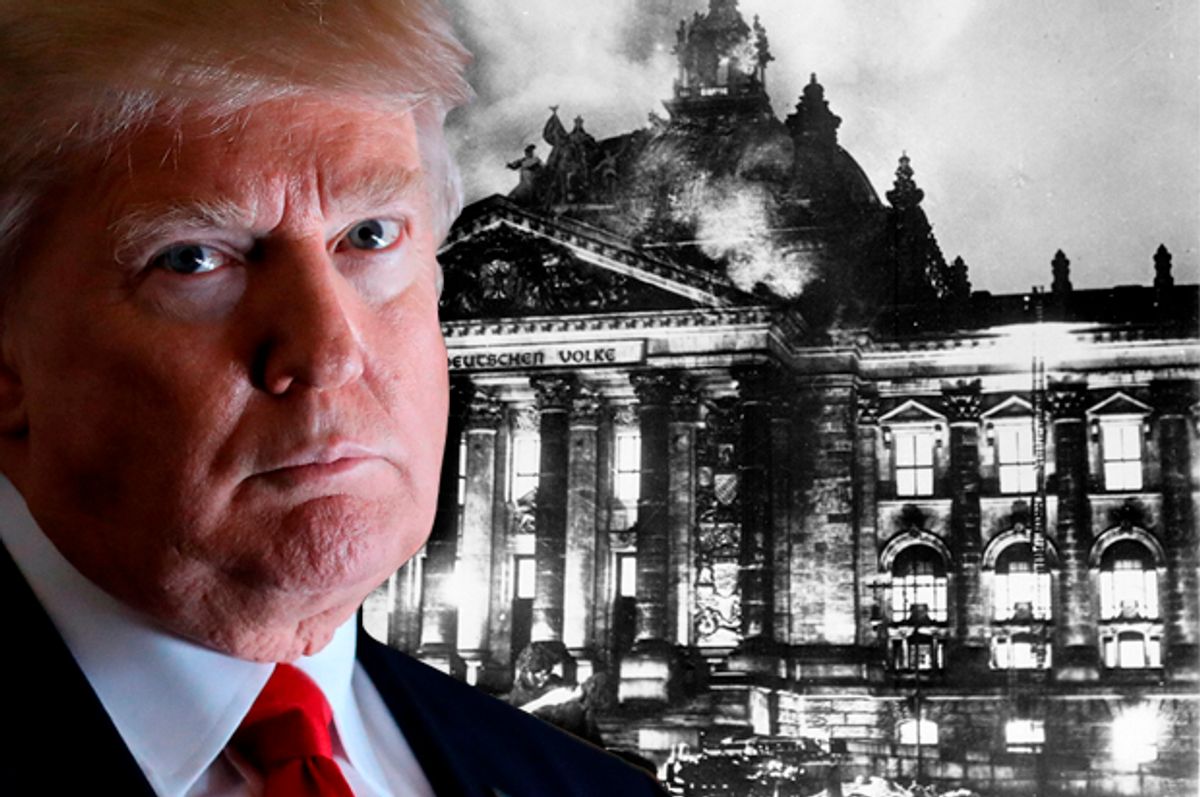 In the hours leading up to President Trump's speech to the joint session of Congress on Tuesday night the news networks were giddy with excitement. They had been told by a "senior White House official" in a private luncheon with news anchors that the president was now in favor of comprehensive immigration reform. This seemed to signal a major reset in the administration's agenda and the media outlets couldn't have been more thrilled.

Nobody knew whether that proposal would be part of the big speech but there was a lot of feverish speculation that Trump was planning to surprise the country with a long-awaited "pivot." As we all know now, he didn't mention any such possibility in the speech. It looks like the whole thing was just a ruse to fool the media into giving Trump big props in the run-up to the event.

CNN's Sara Murray reported yesterday that the administration basically told the news anchors what they wanted to hear, what Trump officials believed "would give them positive press coverage for the next few hours." She added that a "senior administration official" had admitted it was "a misdirection play." Said John King:

Yes, that's right: The "senior-most official" at the lunch was the president himself. If members of the press don't understand by now that Trump lies as easily as he breathes, right to their faces and the entire world, they really need to find another line of work.

This is particularly true in this case. It's not even the first time that Trump pulled this exact bait and switch. In late August there had been a flurry of gossip that Trump was going to "soften" his stance on immigration in his first major policy speech on the issue. He first flew to Mexico for a bizarre surprise meeting and photo op with President Enrique Peña Nieto and then returned to Arizona to deliver what was anticipated to be his big pivot. It was anything but. He delivered one of his most hard-line speeches of the entire campaign that night, stunning the press corps. The most memorable line was this one, delivered with a feral snarl:

There will be no amnesty. Our message to the world will be this: You cannot obtain legal status or become a citizen of the United States by illegally entering our country. . . . People will know that you can’t just smuggle in, hunker down, and wait to be legalized. Those days are over.

One would have thought that after being misled on this subject before, representatives of the media would have shown a little bit more skepticism this time.

Trump's big speech on Tuesday was received rapturously in the Beltway anyway, since he managed to get through it without bragging about the size of his inauguration crowd or calling the press disgusting. It was so over the top that even the White House was taken aback:

In fact, not only was there no pivot on immigration. Trump once again took the opportunity to bash immigrants in the crude demagogic fashion he's employed since he first descended that escalator in June 2015 and called Mexicans drug dealers, criminals and rapists. He spared the national audience the lurid reference of, say, "a woman, 66 years old, a veteran who was raped, sodomized, tortured and killed by an illegal immigrant," but he introduced the families of three other murder victims, making the case that the country is under siege from rampant immigrant crime.

Following that theme he discussed his Jan. 25 executive order to create an office called Victims of Immigration Crime Engagement or VOICE within the Department of Homeland Security, with the express purpose of "making public a comprehensive list of criminal actions committed by aliens.” (Note there's no requirement that these "aliens" are in the country illegally.)

This strange order passed more or less unnoticed amid the chaotic first weeks of the Trump administration, but it's just as disturbing as the more dramatic travel ban and equally irrational. Neither of these flamboyant anti-immigrant edicts address real security issues. Instead they serve the sole purpose of portraying immigrants as dangerous and threatening.

The facts do not bear that out. Research shows that immigrants commit crimes at a lower rate than native-born Americans and breaking the law to enter the country illegally does not predispose one to commit other crimes. The purpose of publishing a list of crimes committed by "aliens" can only be to stigmatize the immigrant population, a tried and true method of inciting bigotry and contempt for a specific group of people.

There are parallels to be found in U.S. history, with the marginalization of earlier waves of immigrants and our horrific scapegoating of African-Americans and Native Americans for crimes they didn't commit. But the drawing up of lists of criminals of a certain ethnicity to publish for public consumption brings to mind the most famous scapegoating of a population in history. That would of course be the systematic persecution of the Jewish population of Europe during the Nazi era.

From the early 1930s onward, the pro-Nazi newspaper Der Sturmer published lists of crimes allegedly committed by Jews. When Adolf Hitler came to power the government took over the job in order to further stoke anti-Semitism. The point of Trump's order is to stoke anti-immigrant paranoia, almost entirely directed at Latinos and Muslims. The parallel is ugly but it's accurate.

Trump may not stop there. During the presidential campaign he was caught on tape saying that he thought Muslims should have to register on a national database, which also brought up a nasty echo of the Nazi era. The idea wasn't discussed much again until after the election when it was reintroduced by Kansas Secretary of State Kris Kobach, a key Trump adviser on immigration. The president said, "You've known my plans all along."

The administration hasn't officially proposed a Muslim database yet. But the sinister implications of the VOICE program should make clear that no matter how much he modulates his tone and how many times he fakes a "pivot," Trump is prepared to go in the most sinister direction.