The bigger question behind Trump's botched Yemen raid: Why are we being dragged into yet another war?

Trump was acclaimed as "presidential" for his tribute to Carryn Owens. But why was her husband sent to Yemen? 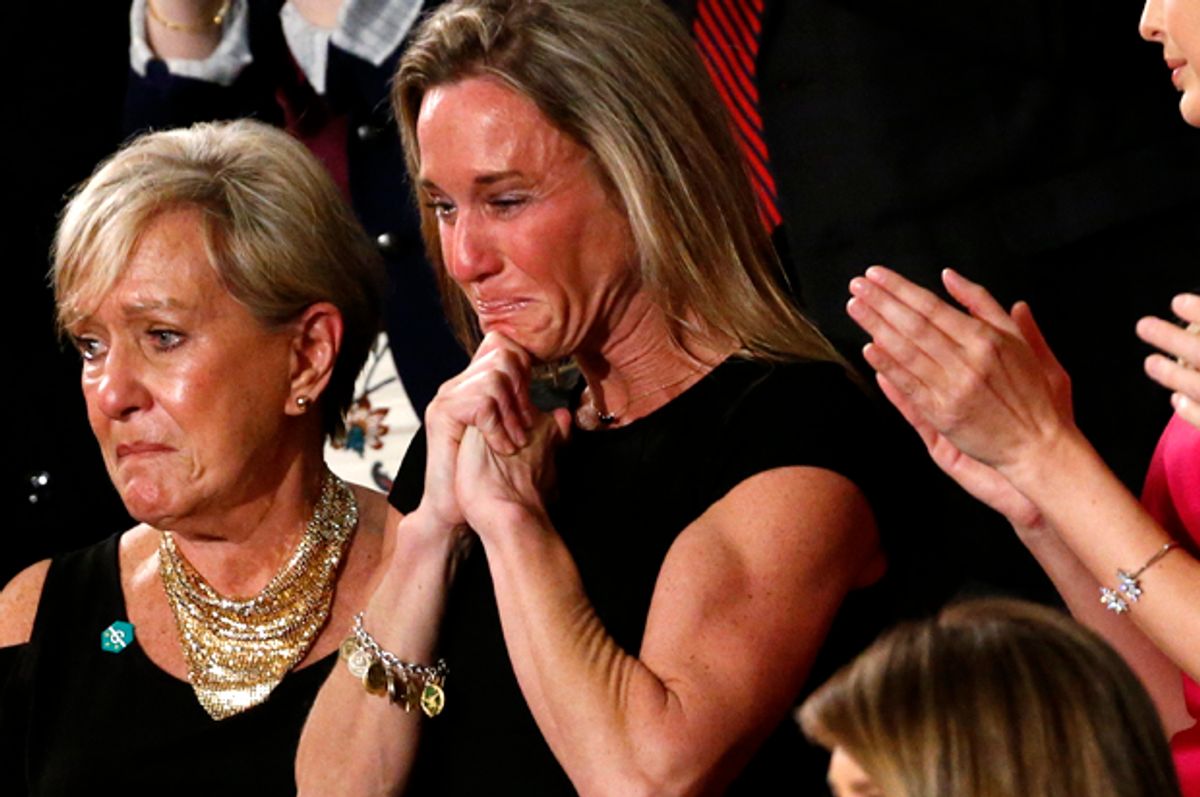 Here's a free idea for members of the mainstream political press: Instead of falling all over themselves to declare Donald Trump “presidential” after a speech in which he cynically used the widow of a Navy SEAL killed in a raid in Yemen almost five weeks ago as a political prop, maybe the media could instead use its power and influence to start a debate over the wisdom of staging commando raids in that war-torn and unstable nation in the first place.

Such a conversation might be less fun than debating the optics of Tuesday night’s speech. On the other hand, it could lead to a reduction in the number of young widows of service members, to say nothing of saving lives in Yemen. Everybody wins! Except for Trump, who will have to find another way to satiate his unquenchable ego.

According to the Daily Beast, however, we might be in line for more scenes like Tuesday’s, if only because the president plans to loosen Obama-era restrictions on approving such actions by giving military commanders more authority to order them without consulting the White House:

In declared war zones, U.S. commanders have the authority to make such calls, but outside such war zones, in ungoverned or unstable places like Somalia, Libya, or Yemen, it can take permissions all the way up to the Oval Office to launch a drone strike or a special-operations team.

Trump’s subsequent defense of the Yemen raid, and discussion of accelerating other counterterrorist operations, shows his White House will be less risk averse to the possibility of U.S. — or civilian — casualties.

There are certainly some instances when the military needs to act quickly to take advantage of fresh intelligence. But there are also other considerations — or at least there should be — when ordering military action in a country where we are not at war. What is the potential diplomatic fallout, for example? Could the Yemen raid pull us deeper into the ongoing conflict in that country, where we are already providing financial and material support to Saudi Arabia, which launched the war nearly two years ago?

Such considerations are among the reasons why we prize civilian control of the military.

But Trump has already shown an unwillingness to take responsibility for ordering this raid, the first military action of his presidency, which resulted in the death of not only Navy SEAL Ryan Owens but also as many as 30 Yemeni civilians and an 8-year-old American girl, Nora al-Awlaki. Now he’s going to take even less responsibility for future cock-ups by devolving more power for ordering military actions to his commanders.

Not that the president apparently put much thought into this raid in the first place. According to various reports, he gave the go-ahead over a small dinner with a couple of advisers, the chair of the Joint Chiefs of Staff, and James Mattis, his newly appointed defense secretary. Mattis allegedly goaded the president into giving his OK by telling him that President Barack Obama would never have been bold enough to try it.

Now the whole thing looks like an epic failure. In addition to the aforementioned deaths, the alleged target of the raid, al-Qaida leader Qassim al-Rimi, got away and may not have even been there in the first place when the SEALs attacked. Despite the administration’s claims that the commandos at least snagged valuable intelligence from the targeted house where they thought al-Rimi was hiding, 10 senior officials across the government told NBC News on Wednesday that the raid actually yielded nothing of value.

It seems strange we are not having a more public argument about the merits of the botched Yemen raid and, more generally, our involvement in that country’s war, which has been a massive humanitarian disaster, according to many international sources. For that matter, it seems strange that Trump on Tuesday night did not mention the ongoing war in Afghanistan, which is now the longest in the nation’s history. Nor did he talk in more than generalities about his plans for combatting ISIS, or his proposals to deal with the ongoing mess in Syria, where our military is also engaged on a limited basis.

Which brings us back to Carryn Owens, widow of Ryan, the SEAL killed in Yemen. Trump earned lavish praise from pundits across the political spectrum on Tuesday night for the ovation he generated for her by recognizing her during his speech. It was “capital P Presidential.” It was the moment he “became President of the United States.” What was notably absent was any consideration of just why Carryn Owens is a new widow to begin with, or whether her tragedy could have been avoided with a president who is more attentive to his duties and less concerned with looking more macho than his predecessor.

Such a conversation, it seems, is beyond us. Which means a whole lot more widows like Carryn Owens may be in our future.