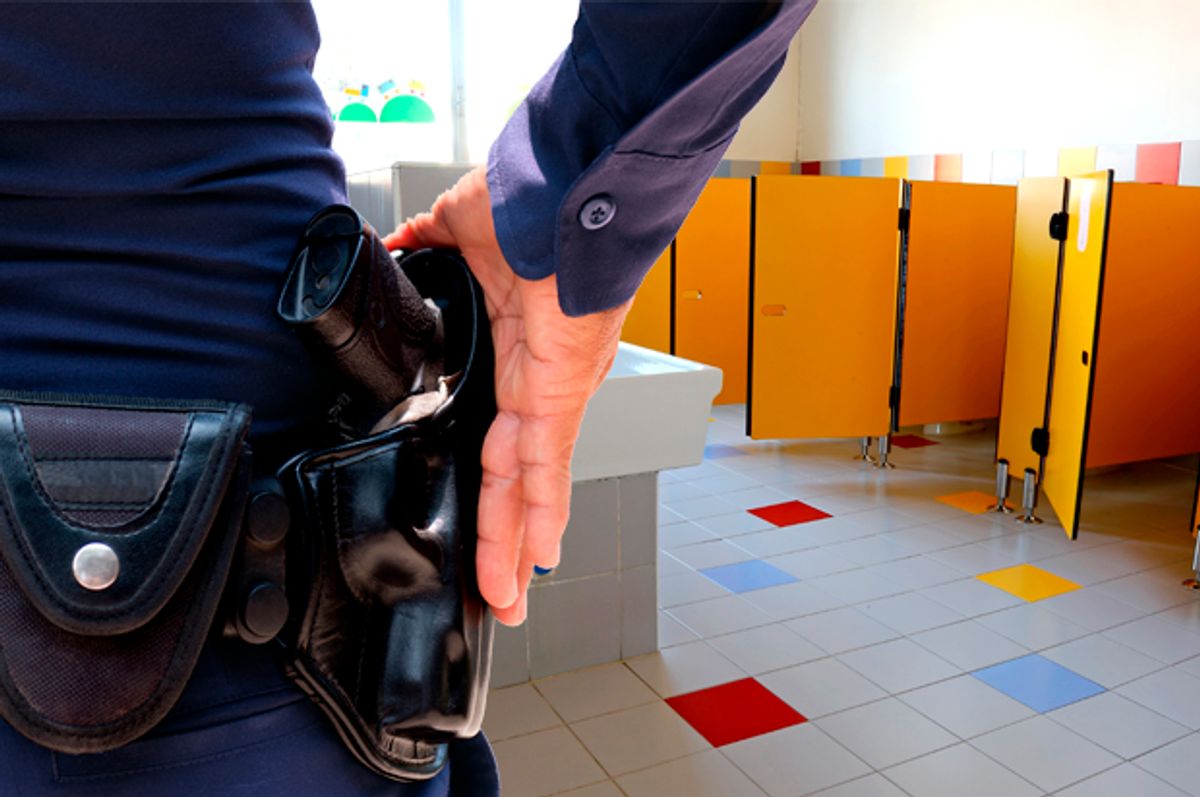 It was a bad time to come out as transgender in North Carolina. Elijah Tuck, an 18-year-old college student, began transitioning during his senior year of high school. For Tuck, it was natural to start using the men’s restrooms because as someone who “passes” for male, he’d already gotten looks and comments when attempting to use the women’s facilities.

While waiting for his girlfriend in a women's restroom at Target, a woman walked in and was startled to see him — lanky and fair, large glasses perched on a slender frame. Tuck looks like the kind of kid you’d call to fix your computer, not someone you’d expect to see standing in the women’s restroom. The woman, confused, asked if she was in the wrong place. “No, but I might be,” Tuck remembers saying to her. After that day, he began using the men’s room whenever possible to avoid incidents like that one.

The problem was that Tuck came out to friends and family just eight months after North Carolina passed House Bill 2, a law that prevents transgender people from using the restroom that corresponds with their gender identity. In addition to blocking local legislatures from instituting nondiscrimination ordinances to protect the LGBT community, the bill forces trans people to use the public bathroom that matches the gender listed on their birth certificate in schools and government-owned buildings, like city parks and libraries.

In the wake of HB 2, Tuck said he was forced to use the staff bathroom in the library at school, inconveniently located on a different floor than the majority of his classes. But he alleged that he almost wasn’t allowed to use that facility at all. The guidance counselors, Tuck claimed, held a meeting to discuss whether he would be permitted to use a single-stall bathroom or be forced to use the girls’ bathroom with the female students.

“A couple of the guidance counselors said it was ‘just a phase,’” Tuck said. “It’s not a phase. It’s really not. I’m just trying to pee.”

After a year of controversy over North Carolina’s bathroom bill, the state has attempted to draft a compromise that claims to end the daily struggle faced by people like Tuck, who just want to use a restroom safely and without incident. But advocates say that the proposed legislation, House Bill 186, would create a whole host of other problems for the state, even while keeping the most contentious provisions of the existing law in place. The bill, even while appearing to strike down anti-trans hate, would allow for sweeping discrimination against the LGBT community.

HB 186 wouldn’t just be HB 2.0, if passed. It might be even more dangerous than its predecessor.

To say that HB 2 has proven unpopular in North Carolina is an understatement.

Pushed through the legislature last March, the Charlotte Observer reports that the bill has cost the Tar Heel State at least $140 million in lost revenue due to boycotts by the NCAA, ACC and NBA, the latter of which announced last year that the league would be moving the All-Star Game from Charlotte until the bill is repealed. The NCAA further upped the ante last month with a critical ultimatum: The sporting association claimed that if North Carolina didn’t strike down HB 2 by the end of February, the state could lose out on hosting March Madness games for the next six years.

North Carolina has already missed that deadline, but legislators remain desperate to end months of intense scrutiny from business leaders. Mecklenburg County, the district Charlotte calls home, has lost a reported 2,500 jobs since HB 2 was enacted. Most recently, the German shoe brand Adidas announced that it would be opening a new factory in Atlanta instead of High Point, a North Carolina manufacturing town rumored to be in consideration.

A number of so-called compromise bills have been floated in the legislature, but HB 186 appears to be gaining the most steam. Rep. Chuck McGrady, the bill’s sponsor, has claimed that the legislation is a “reset to right back where we were before all this silliness started,” in essence a way to erase the damage done HB 2.

But John Autry, a Democrat who represents Mecklenburg County in the state’s General Assembly, said that there’s “not much difference” between HB 186 and its predecessor.

“The bill continues to block LGBT people out of protections across the entire state,” Autry told Salon over the phone. “It prohibits cities like Charlotte, Raleigh, Durham and Greensboro from passing local ordinances that expand protections to LGBT citizens in those municipalities. It also specifically leaves out LGBT people in defining the protected classes for discrimination across the state.”

“They took the lid off Pandora’s Box, and now they don’t know how to get it back on,” he added.

There are many eyebrow-raising components of HB 186. First and foremost, the legislation doesn’t solve the problem that it was allegedly intended to address, and in many ways HB 2 would remain in place. Under the new bill, the state legislature alone would determine the policies for private bathrooms, and given that this is the same Republican-controlled General Assembly that passed HB 2, that seems to telegraph the legislature’s intent to keep transgender exclusions intact. Cities would be allowed to enact their own nondiscrimination policies allowing trans people to use the restroom in all buildings owned by the government, but local governments wouldn’t be permitted to do the same for, say, a restaurant or an amusement park.

Sarah McBride, National Press Secretary for the Human Rights Campaign, believes that the bill amounts to “doubling down on discrimination.”

“It’s legislation that reinforces and solidifies the most discriminatory and hateful components of HB 2,” McBride said. “These are measures that again solidify some of the worst parts of HB 2. They treat LGBT people differently and create onerous, burdensome mechanisms for them to gain or seek protection.”

If you aren’t on board with HB 186 yet, you’ll find even less to like about the bill from here. Were a local legislature to pass protections for its LGBT population preventing them from being fired or denied housing based on their identity, the bill allows area residents to easily introduce a voter referendum striking down the policy. To put the rights of LGBT people up to a vote, opponents would need to collect signatures amounting to “10 percent of the participants in the most recent municipal elections,” as Chris Brook of the North Carolina ACLU explained. Turnout in those elections is typically very low.

Currently, the bar for getting a referendum on the ballot is much higher. Many cities don’t allow citizens to petition to have issues considered by voters, but those that do require the total amount of collected signatures to equal at least 10 percent of all registered voters in the metro area.

Brook argued that changing the referendum guidelines would allow local citizens to continually jeopardize the rights of the LGBT community.

“In Raleigh, HB 186 would require you to get around 3,600 signatures to have an anti-discrimination ordinance put up for a vote,” said Brook, who serves as the advocacy organization’s legal director. “The way things are now, 10 percent of all registered voters would actually be 36,000 people. It’s a much lower threshold, and it’s going to result in us having HB 2 food fights at the local level for years to come.”

“You could spend a couple hours on a Sunday morning gathering signatures in a handful of megachurches to call for a referendum,” Autry added.

Matt Hirschy, Director of Advancement for Equality North Carolina, claimed that these sorts of ballot initiatives “never work well for our community.” In 2015, the Houston Equal Rights Ordinance (HERO) was voted down by a 22-point margin after critics suggested that nondiscrimination protections would allow men dressed as women to enter public bathrooms. Local commercials depicted bathroom predators abusing HERO to prey on helpless little girls, even though there’s never been a single case of trans-inclusive public policy leading to a spike in sexual violence.

“HB 186 is just this Frankenstein of ugly things that’s being passed off as a compromise,” Hirschy  said. “I have no assurance this is going to solve our problems.”

What’s perhaps the bill’s most pernicious aspect, though, is that HB 186 would allow religious organizations, charities, and even 501(c)(3) nonprofits to effectively opt out of any nondiscrimination laws passed by local legislators. That provision is similar to bills like the First Amendment Defense Act (FADA), a proposed right-of-refusal law that would allow faith-based organizations to deny services to LGBT people based on their religious beliefs. But HB 186 isn’t exclusive to religious entities. Homeless shelters or domestic violence agencies could turn away trans people in need.

“Under this proposal, even the ACLU would be given a license to discriminate,” said Sarah Gillooly, the Policy Director of ACLU North Carolina. (She noted this would be in violation of the organization’s mission and would not happen.)

McBride said this would be of particular harm to LGBT people who rely on these social services to go about their daily lives.

“If you are going to open your doors to the public, you should be required to serve the public equally,” McBride said. “In many cases, nonprofits are providing life-saving services to communities that are most at risk. We also know that LGBT people are disproportionately likely to be unemployed or in poverty, meaning that they are desperately in need of the kinds of services that many nonprofits, organizations and religious charities provide.”

Karla McIntyre, Elijah Tuck’s mom, said that a bill like HB 186 — which has yet to be debated in the General Assembly — would only magnify the fear she constantly struggles with as the mother of a transgender child.

“As a parent, I’m horrified,” McIntyre said. “He doesn’t belong in a girls' bathroom. He doesn’t look like a girl. But I’m worried if he goes in the men’s restroom, he’s going to be targeted. As a parent, you want your child to fit in. He wants to be normal. He wants to go and pee like everybody else.”

If McIntyre worries what could be behind the door when her son enters a restroom, Tuck harbors the opposite concern. After a year of being demonized by his own legislature, he’s tired of being seen as some kind of “monster.”

“These bills go deeper than bathrooms,” Tuck said. “They are creating a fear of transgender people that’s unnecessary. People are scared of me before they even get to know me. I think a lot of what they’re being fed is from House Bill 2 and now House Bill 186. They send the message that trans people who want to use the bathroom are cross-dressing pedophiles. Trans people are trying to get access to your women and children to hurt them. People don’t know any better.”