Susan Sarandon was right: She warned us Hillary was doomed; liberals didn't want to listen

No, she didn't elect Trump — and it's easier for liberals to hate on Sarandon than to face their own hypocrisy 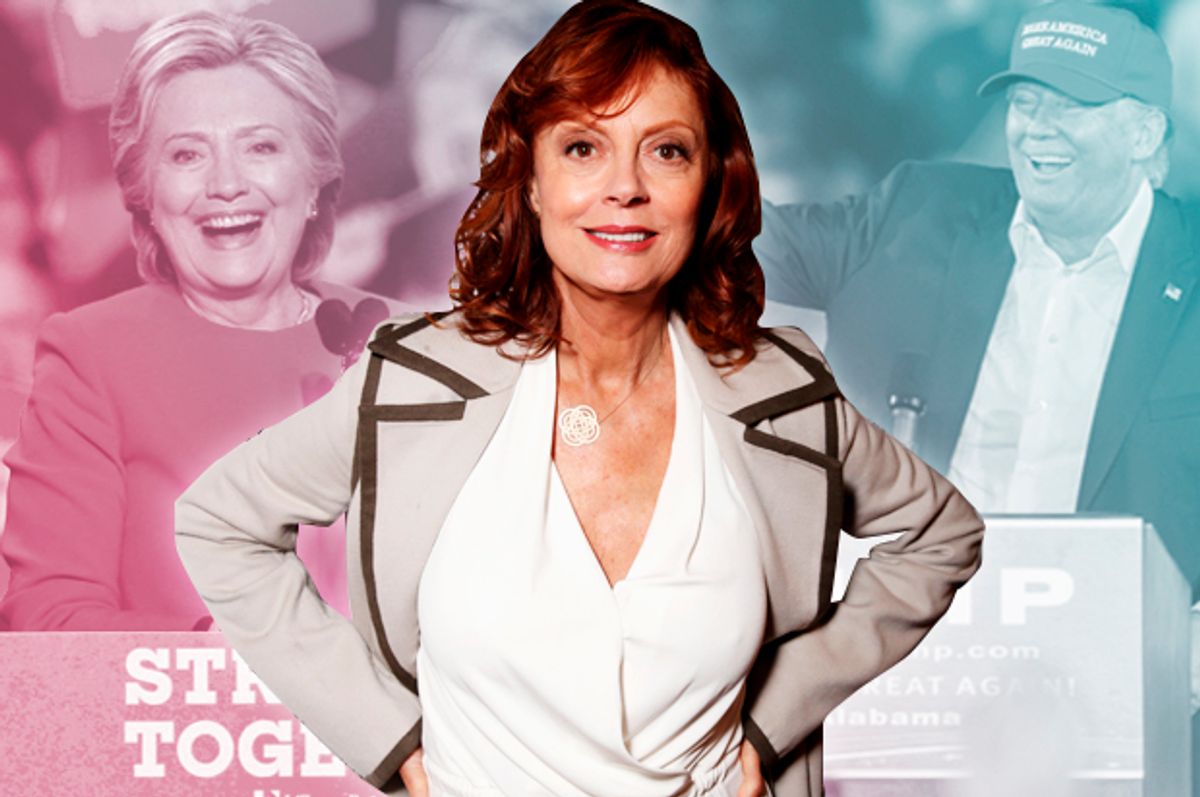 Remember that time when Susan Sarandon said she wouldn’t vote for Hillary Clinton and all hell broke lose in liberal land?

The actress and activist — who had previously been a vocal Bernie Sanders supporter —  told MSNBC’s Chris Hayes in March last year that although she hadn’t decided which person to vote for, “some people” felt that Donald Trump would “bring the revolution immediately” — whereas Clinton was all about “shoring up the status quo.”

This naturally led to cries of outrage from the Clintonista center-left. Sarandon is not a good feminist, they seethed. She’s a traitor to the liberal cause, they fumed. She would put the country at risk. It was people like her, they said, that risked putting Trump in office. This went on for a while, with articles popping up all over the place condemning Sarandon for not falling in line with the rest of politically-conscious Hollywood. Newsweek writer Kurt Eichenwald called out Sarandon’s “narcissistic purity” on Twitter and blamed her for Trump’s win.

Sarandon was back on Hayes’ show recently and was asked this time how she felt now that Trump had won. There was a strong undercurrent of blame throughout the interview: The implication from Hayes was that Sarandon should get down on her knees, grovel and apologize profusely for failing to vote for Clinton. Much to his obvious disappointment, she defended her earlier comments and even doubled down on them.

But here’s the thing: If liberals weren’t too busy tweeting abuse at Sarandon and writing think pieces about her white privilege, they might just be able to see that she makes some salient points about the American political system, the media and the Trump presidency.

So, liberals, hold your fire for a second, and let’s look at this with an open mind.

1. It’s uncomfortable for Clinton supporters to admit this, but the fact is, Sarandon was awake when many Democrats weren’t. She was a vocal supporter of Sanders, the only truly progressive candidate with any chance of securing the nomination. Clinton was a status quo candidate and, as Sarandon has pointed out, if you back the status quo when people are desperate for change, “you’re going to have a difficult time.”

We’ll never know if Sanders could have beaten Trump, but we do know that Clinton could not. We know that the Democrats allowed Clinton to run a status quo campaign when people were hungry for revolution. We also know they schemed and connived against Sanders and paid the price. For that, Sarandon can’t be blamed.

2. Now, how 'bout that revolution? Sarandon was right there, too. OK, "revolution" may be too strong a word. But she is correct in saying that Trump’s presidency has woken up people in a way that never would have happened if Clinton had won. The popular retort to this is: Oh, but Clinton would have been much better than Trump. So there would have been no need for revolution! Therein lies the crux of the liberal con.

While Trump is brash and in-your-face about his awful policies, Obama and Clinton simply put a kinder, sugarcoated face on some of the very same things. Take fracking, for example. Fracking boomed under Obama. At one point, Clinton even tried to tar the image of anti-fracking environmentalists by linking them to a Russian plot to hamper the U.S. energy industry.

"Gasland" director Josh Fox — whose 2010 documentary went a long way toward reshaping progressive consciousness of the fracking issue — said the following in the same MSNBC episode with Sarandon:

Obama is the one that’s left us with the legacy of 300 frack-gas power plants. That’s thousands of pipelines. That’s millions of fracking wells. That was Hillary Clinton’s and Obama’s plan — Obama was the fracker in chief for eight years.

While Clinton’s State Department was promoting fracking around the world, we were reading The Huffington Post’s “65 Reasons Hillary Clinton Is a Badass” and perusing BuzzFeed’s “40 Most Adorable Pictures of President Obama.” Now the media has suddenly cottoned on to how awful this is for the environment and we’re all supposed to dutifully pretend that fracking was invented by Trump.

3. It’s worth including a note here about foreign policy, too. Sarandon has made multiple comments about Clinton’s foreign policy record. She told The Young Turks: “She did not learn from Iraq, and she is an interventionist, and she has done horrible things — and very callously. I don’t know if she is overcompensating or what her trip is. That scares me. I think we’ll be in Iran in two seconds.”

While it looks like Trump might also be salivating for conflict with Iran, Sarandon was not wrong about Clinton. Compared with Trump Clinton is a rabid interventionist. (Trump appears to be at least somewhat more of an isolationist, which is problematic for other reasons.) She is an unashamed hawk and proponent of U.S.-led and -engineered regime changes around the world — under the guise of liberal humanitarianism, of course.

Clinton's role in supporting the 2009 Honduras coup and subsequent destabilization of that country has been well documented. She led the charge for a failed intervention that turned Libya into a failed state, and she was a proponent of implementing a no-fly zone in Syria, which could have resulted in a shooting war with Russia. As for Obama? Well, he only bombed seven Muslim-majority countries during his time in office.

4. Sarandon has also laid some blame for the current political situation on the media. In one particularly awkward exchange with Hayes, she questioned his journalistic credibility:

Sarandon: You consider yourself a journalist, right?

Sarandon: So how many hours did you spend on Standing Rock?

Hayes: Not very much.

A while later, Hayes asked Sarandon to look him in the eye and say whether Trump was as bad as she expected him to be as president. She dismissed the question and asked him this:

Can you look me in the eyes and tell me you were doing your job to cover these issues completely? You just told me that you didn’t really cover DAPL. Are you covering now all of these [pipeline] explosions that have just happened? Because that’s what we need you to do — what we need from you is to allow people to understand what’s happening.

Again, Sarandon is right. The press treated Obama and Clinton with kid gloves compared to the battering they are giving Trump. It’s not the job of members of the media to decide that a president’s policies are less deserving of harsh criticism if he seems like a nice guy. It’s their job to be rigorous in their coverage of every president, with no exceptions.

Democrats who blame people like Sarandon for the Trump mess reveal a lot about themselves. Could it be that the real reason they don’t want to listen, or even entertain her opinions, is because if they did, they’d come face to face with their own hypocrisy?

That’s the crux of the matter. When Sarandon says Trump is bringing the revolution faster, what she’s really doing is pointing out liberal hypocrisy. Far too many liberals who have developed a newfound passion for environmentalism and world peace displayed little interest in either of those things during Obama’s presidency — and very likely would not have batted an eyelid over a Clinton continuation of similarly disastrous policies either.

To say all this is not a defense of Trump, lest anyone interpret it that way. It’s simply to say that nothing changes if nothing changes. If liberals really want to see progressive policies put into action, they’re going to have to open their eyes and vote for actual progressives.