From cultivating networks to being transparent, these employers’ recruitment tactics establish a level of trust 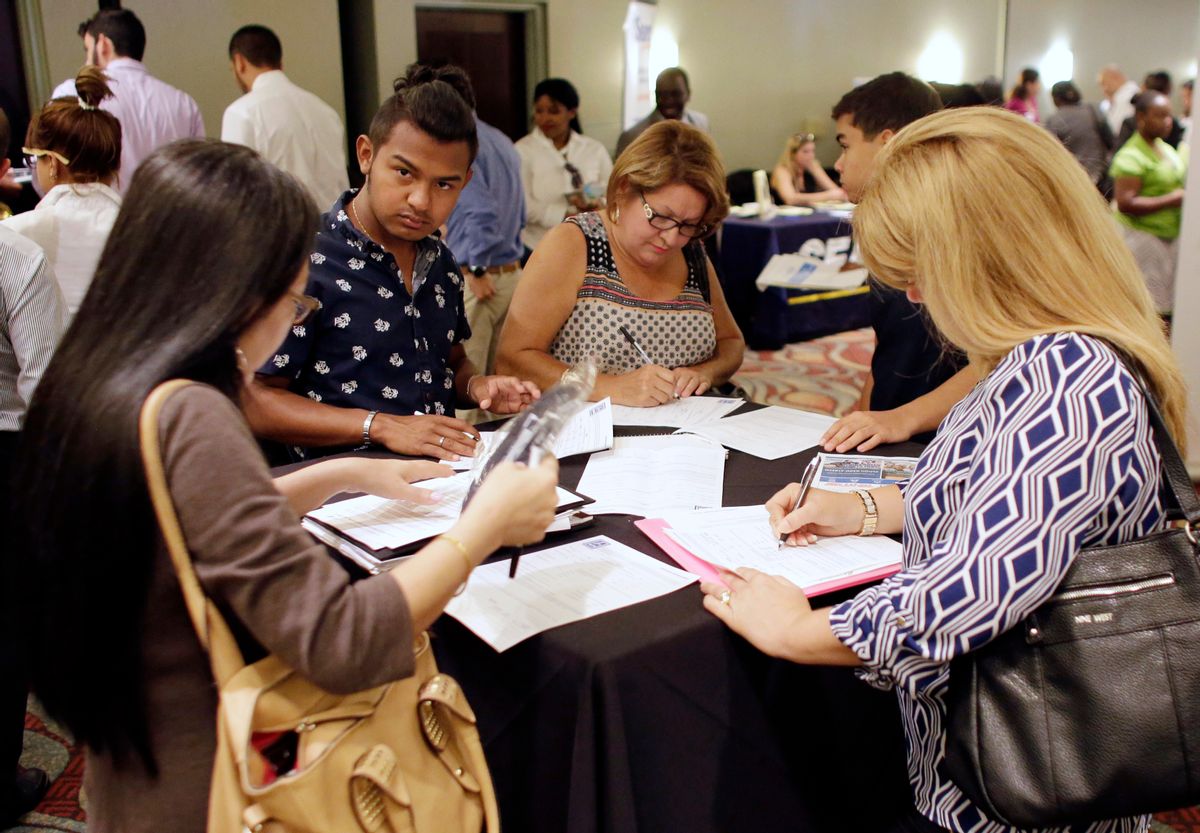 FILE - In this July 19, 2016, file photo, people fill out job applications at a job fair in Miami Lakes, Fla. Tepid income growth and shrinking opportunities for blue-collar workers have kept many Americans anxious about jobs and the economy, seven years after the Great Recession ended. The unemployment rate has fallen to a relatively low 4.9 percent. But many Americans are struggling to keep up with an economy that has been fundamentally transformed since the recession, and is very different from the one their parents experienced. (AP Photo/Lynne Sladky, File) (AP Photo/Lynne Sladky)
--

The overall unemployment rate in the United States is at near-record lows, and while that’s great for employees, employers can feel the pinch when seeking new team members. Not only that, but with engagement being today’s benchmark for a productive work force, it’s more important than ever to hire not only quickly, but also correctly. By making transparency and honesty integral parts of the interview process, companies can establish a level of trust and enthusiasm with interviewees that sets them up for success once they’re on the job.

We checked in with four companies deploying innovative hiring tactics in an ultra-competitive job market.

Anyone who has looked for a job knows that the interviewing process can be surprisingly mysterious. Candidates might be rejected, without explanation, for roles they believe they fit perfectly, or they may be surprised by the depth or breadth of a company’s recruiting method along the way. Hart, a digital health and fitness platform based in Anaheim, California, aims to take the unknown out of hiring by making the process as transparent as possible, from start to finish, whether you receive an offer or not. It’s a process Talent Director Cory Eustice calls "purposeful hiring." “Hart strives to eliminate [the] anxiety and instead create a process that’s fulfilling for both sides, no matter the outcome,” noted Eustice. “For candidates who ultimately make a home here at Hart, we believe this kind of respect and transparency sets the stage for the rest of their time at Hart.”

Hart’s transparency begins with making sure that candidates are fully informed about what to expect throughout the interviewing schedule, with whom they’ll be meeting, where, when and why. Hart also strives to inform candidates of their decision within 48 hours of completing the interviews. But perhaps the most surprising element of Hart’s hiring approach includes letting prospects know why they weren’t offered a position in an honest and straightforward way. As a growing technology firm, Hart is aware that their hiring processes will need to change and adapt, and they’ve worked hard to evaluate and improve, in no small part by eliciting feedback and criticism from candidates about how the process worked, or didn’t work, for them.

2. Try before you buy: Buffer

At Buffer, prospective new employees are invited to participate in a paid 45-day boot camp, or probationary period, after which candidates and company decide if the match is a good one — 70 percent of the time, it is. The social media platform employs an all-remote team of roughly 80 employees on six continents. The culture and work can be challenging, making meticulous hiring a must. “Because we’re a particular sort of culture, it’s fun for a lot of us, but it’s not always the right place for some people,” said Community Champion Arielle Tannenbaum. “Boot camp is an opportunity for both sides: for us to see if the person will be a good fit for our culture and for them to see if they enjoy it.”

The process is a leap of faith since it requires prospects to abandon full-time employment or job seeking during the six-week trial, but Happiness Hero Octavio Aburto believes the process is worth it. “Even though we keep growing and growing, the core feeling remains,” he said. “I think it speaks to the great care and attention that our people team has put in.”

In the ultra-competitive Silicon Valley employment market, finding and hiring the right candidates is always a challenge. When customer experience and contact center solutions firm Genesys became dissatisfied with the length of time required to fill important roles, they decided to build a large pool of strong candidates with a multi-pronged approach.

The Daly City, California, company has created an international associates program that hires recent grads based on traits like motivation, drive and creativity, not only grades. And while technical and engineering backgrounds are preferred, students from all disciplines are considered, as are mid-career professionals looking to reboot. Each associate undergoes a demanding training period followed by a long assignment under an assigned mentor. As of 2015, the company had ushered 70 associates through the program and engaged with nearly 150 interns globally.

In 2015, the firm also kicked off a program to connect with high school students. This effort invites students to interact with Genesys software and provide feedback a fun, entertaining environment, and allows the company to keep tabs on students as they progress through their studies, potentially resulting in internships and job offers after graduation.

Merijn te Booij, executive vice president of product and solution strategy at Genesys, told Forbes, “We’ve invested in a long-term, sustainable solution. Now, we are networking to create pools of potential employees who have a connection and relationship with us.” The methods have certainly paid off: Genesys’ average time to hire was cut in half in just one year.

Many recruiters try in vain to get past nerves and formality to assess the real human being under the candidates’ polished, suited veneer. At HalloweenCostumes.com, where holiday business means hiring more than a thousand seasonal employees each year, they may have solved the problem. Their secret weapon? Fun.

Recruiters at the Mankato, Minnesota-based company first use a series of “rapid-fire challenge” questions to get to know candidates. Far from hardball, technical queries, the challenges are quirky, thought-provoking questions like, “If you were a hot dog, would you eat yourself for food?” and “If you were a color, what color would you be and why?” Founder Tom Fallenstein told Entrepreneur, “You can tell that you’re really getting to know them because they can’t rely on canned answers. When they’re answering so quickly or in a game environment, [job candidates] really respond more honestly.”

Next, candidates might be asked to meet with potential managers and peers for in-person interviews, with a twist. They’ll be playing a game of Jenga where each puzzle piece is inscribed with the next interview question. Again, the point is to inject fun and a bit of the unexpected to assess more than how well a candidate memorized rote interview responses. In the HalloweenCostumes.com process, candidates will be able to demonstrate their ability to handles stress, think on their feet and inject humor into surprising situations.