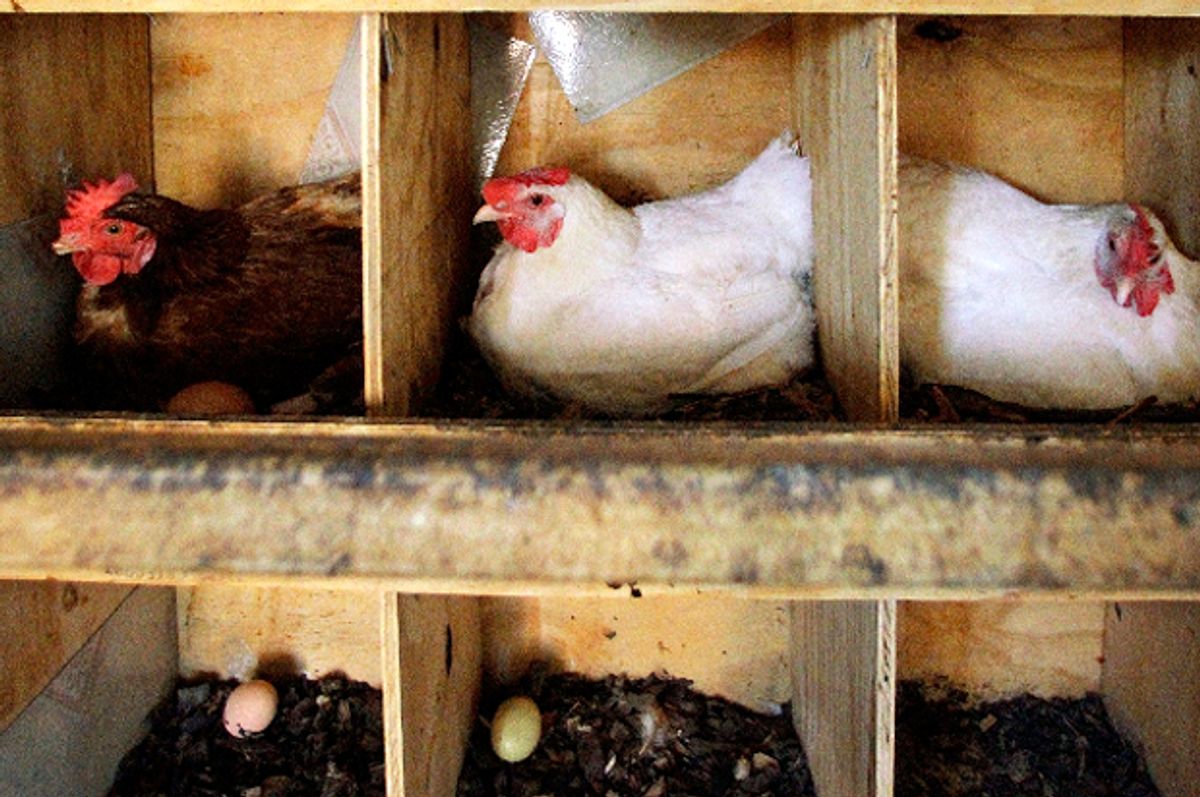 Those who say that we ordinary people can't have any effect on today's corporate behemoths should check out two breakthroughs last year by a group long derided by the establishment as somewhere between wacko and criminal: animal rights activists. Members of groups like the Humane Society are demonized, outlawed, sued and jailed by agribusiness interests for persisting in trying to make life even slightly less awful for animals captured in America's industrial food system. But 2016 was a good year for those groups — and for the animals.

Let's look at Perdue Farms. Perdue is a $6 billion poultry giant; it's the fourth largest in the U.S., producing 676 million chickens in 2015. It has been a major pusher of the industry line that there's nothing wrong or cruel about breeding birds with breasts so heavy that they can't stand or keeping chickens jammed so tightly in cages that they can't spread their wings — or denying them access to the outdoors or even sunlight. But Jim Perdue, who is the grandson of the founder and now the CEO, was having trouble reconciling his corporation's rhetoric with hard reality. After listening to critics, he began discussing alternatives with the animal rights group Compassion in World Farming.

Then on July 1 Perdue announced a wholesale shift in the company's approach to handling the birds, including providing them with lots of sunlight; giving them space to run, flap wings and play; breeding smaller, healthier birds; and using more humane slaughter methods. Also, Perdue will compensate growers not just to cut costs but also for enhancing the birds' quality of life. One of the industry rationales for cruelty is that kindness raises prices and cuts profits. But Perdue is finding that healthier birds actually reduce costs, and that more humane practices attract supermarkets, restaurants and families to Perdue's products. Success for Perdue could shift the whole miserable industry.

That is great news for chickens that are farmed for food, but what about the laying hens that provide us eggs for our breakfast tables? Until recently, nearly all the 77 billion eggs we Americans eat annually have come from hellish, windowless egg factories, each containing hundreds of thousands of laying hens. Tightly packed into wire "battery cages" containing five birds side by side, each hen "lives" (so to speak) in a tiny space with the footprint of an iPad. For a decade, the Humane Society has led a grassroots campaign to liberate these hens through undercover exposés and by pressuring college food managers and retailers like Whole Foods to buy from smaller, more local producers of cage-free eggs.

In 2008, the campaign got a huge boost when California voters passed a ballot initiative banning battery-cage confinement, with the most "yes" votes of any initiative in U.S. history. After that victory, the society's organizers convinced Burger King to adopt a cage-free policy. Next came McDonald's and IHOP, Kroger and Meijer, Costco and Trader Joe's. And then last April, the biggest prize in all of eggdom, Wal-Mart as America's biggest egg buyer, announced a transition to a 100 percent cage-free egg supply by 2025.

But as we all know, President Donald Trump has named some doozies to his Cabinet and one that stands out as a threat to humane and healthy food is Scott Pruitt. He was confirmed as the head of the Environmental Protection Agency, which oversees animal testing for pesticides and chemicals and regulating greenhouse gas emissions and water pollution from factory farms. As attorney general in Oklahoma, Pruitt tried (unsuccessfully) to give special rights to corporate and foreign-owned factory farms and joined a suit aimed at killing the California law for more humane egg production.

For more information and to help stop President Trump and his appointees from rolling back the progress that has been made so as to humanely raise farm animals, visit www.ewg.org/planet-trump.