Inside Kellyanne Conway's world: Says she's in it for the public service, not celebrity

"I was making in 1.5 speeches. . .what I will make this year," says Kellyanne Conway, on decision to serve Trump 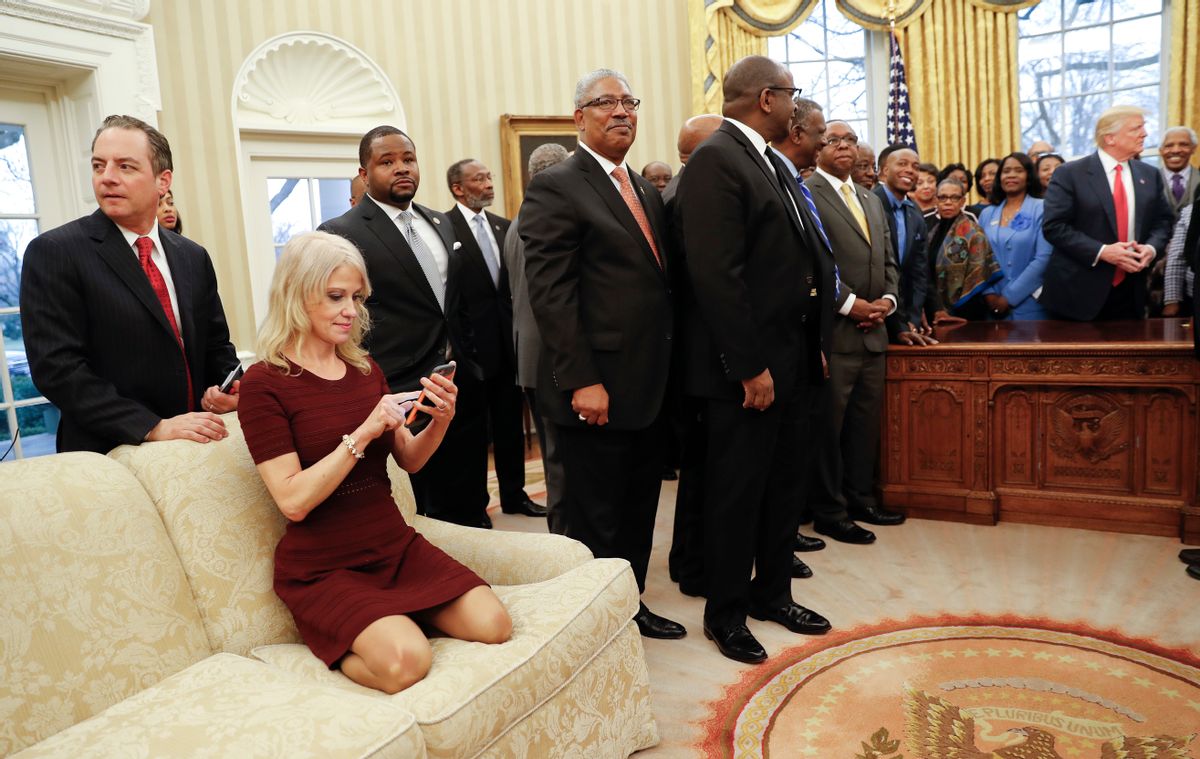 Counselor to the President Kellyanne Conway in a 2.28.17 Oval Office meeting (AP)
--

"I have 24-7 secret service protection, and most White House staff do not. I find it unfortunate," begins Kellyanne Conway, the very visible, highly controversial counselor to the president.  On Sunday's CBS This Morning, Conway showed correspondent Nora O'Donnell her more personal side, but as usual it was hard to determine how much of her soundbites represented deflection, or earnest feeling. This is the mark of a master flack, and someone who is well-versed in public opinion, having been immersed in it for, Conway says, over two decades.  You don't see the façade chip often, but as a writer/producer who has logged hours and hours of video myself, I can tell you that if you look closely, you can catch it in a moment. At 35 seconds into the CBS piece, you see Conway glance aside at the camera while her daughters are playing piano and she is standing next to them as proud mother, making sure the scene is being portrayed well.

Raised in a single-mom household in blue–collar Alpine, New Jersey, Conway said she grew up in a "house of all women", with her mother, her grandmother and two unmarried aunts. Living in this arrangement "has benefitted me tremendously, because there is a certain humility that will never go away," she added.

Conway told O'Donnell that she comes to work at 7:30 am, and leaves "not before" 8 pm, but from the looks of her, Conway - blonde, primped, thin and of late, increasingly beleaguered-looking -  is likely always working. After all, she has to keep up with her boss' frequent, often-nutty early-morning manipulations of the news cycle, a chore none of us would want.

A mother of four children and married for years to attorney George T. Conway III, Conway she says the American public is seeing less of her on TV because her life has been so documented and criticized, much like an actor would be. "I'm not a celebrity, I'm just a pollster and campaign manger," she said.  "People should not look at me at someone who goes on TV...I'm on TV when everyone is still sleeping, or they are watching me from bed. I'm already there." While this made me think of Us Weekly's "Stars, they're Just Like Us!", Conway seems to have taken her reduced media presence in stride, even as she took CBS' cameras inside her New Jersey home and to a local diner with her children.

News anchors and producers would beg to differ with Conway's suggestion that she is lately less visible of her own volition: a February ninth conflict of interest gaffe where she promoted Ivanka Trump's clothing line inappropriately on Fox and Friends, and was later "counseled" by the White House, was more likely the culprit. Asked if she regretted making the pitch for Ivanka Trump, Conway said, "Of course I felt bad. I'm here to serve the president, who is here to serve the people."

Since February 15, she has been banned from Morning Joe on MSNBC. "We know for a fact that she tries to book herself on this show. I won’t do it. Because I don’t believe in fake news, or information that is not true...every time I’ve ever seen her on television, something’s askew, off or incorrect", the show's co-host Mika Brzezinski told the New York Daily News at the time. Morning Joe's main host Joe Scarborough added in the same interview that he didn't want Conway on the show anymore because she "makes things up. She’s just saying things just to get in front of the TV to prove her relevance".

Conway wonders why she is often told she has "she sold her soul", since she says she gave up untold riches she was making as a speaker for private engagements to serve the president, and the American people. And, she finds herself a constant target, says Conway, because she is a woman. Of her many colorful outfits, she told O'Donnell, "Sorry to offend the 'black stretch pant' women of america with a little color!" Then she smiled coyly. "Look at a lot of America today - they don't wear anything that snaps, buttons or zippers. And that's OK, that's their business, but why criticize what I wear?"

And, Conway considers herself a victim of what she called the "triple standard", a new term that may come to be more popular yet than "alternative facts". "We are constantly going back to where I sat, the presumptive negativity of what I wore, or what I said, and I do think it's a triple standard," she told O'Donnell. "People talk about double standard of what a woman wore or said, but the triple standard is that conservative women are cast aside many times by by traditional feminist outlets and individuals who control most of the media. I can't let the haters get to me or the president: what's he doing is so big." I wasn't completely sure what that meant, but it is Conway's gift that she can say something so unbelievable, or vague, and then go on to another topic with a bright smile . . . and you almost don't notice you're confused.

From the Bowling Green massacre, which was pure fiction, and her now-famous comment to Chuck Todd that the president gave "alternative facts" about his inauguration numbers, Conway is enigmatic and polished in the breezy way she handles the president and what he says. "What people should do...what I've always done with others, is look at the measure of someone's career," she said when asked what alternative facts were. "I've been a pollster for two decades plus. I've worked very hard to speak candidly and truthful..." O'Donnell interrupted, "What are alternative facts?"

"Well," said Conway, "It was alternative information and additional facts that got conflated, but respectfully Nora, I see mistakes on TV every single day, and people just brush them off. Then she added, "Everyone thinks it's just so funny that the wrong movie was heralded as the winner of the Oscars, but things happen to everyone."

For all her smooth endorsements of President Trump and his often-nonsensical assertions and accusations, including this weekend's surprise allegations that former President Obama ordered wire tapping on his Trump Tower campaign offices last October (of this, intelligence director under Obama James Clapper told Meet the Press this morning, "I can deny it"),  Kellyanne is still a wife and mother. And, some might say surprisingly, she has empathy in her toolbox.

From the parent perspective, perhaps we can agree on this one thing, then.  Conway considers Twitter and other social media a terrible pox on self-esteem and often, truth, particularly for young people.  She said she is especially disappointed by negative things written about her and the president, mostly because it allows her children to read so much negativity online, which "hurts them."  To calm their fears and concerns, she turns to religion and forgiveness. "I tell them say a prayer for those people, because something's got to really bother you to criticize someone you don't know for doing a job you hardly understand."