Like the Truth and Reconciliation Campaign, "Logan" makes Canadians look bad in a good way 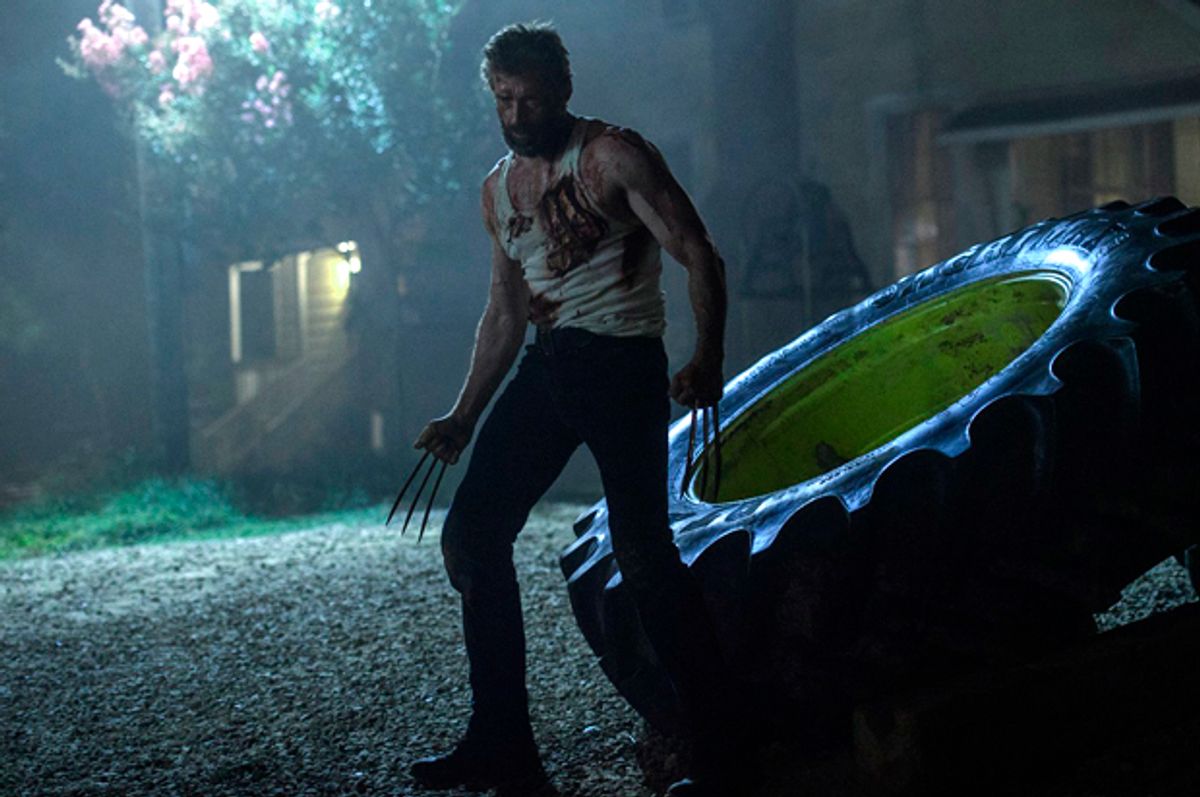 Wolverine, the brooding Marvel comics superhero with the SNIKT! SNIKT!-ing retractable talons and indestructible metal bones, is quite literally a cartoon Canadian.

The sideburns, the casual flannels, the heroic beer-glugging: Marvel’s banner, beclawed mutant is a toque and Timmy’s double-double (that’s a Tim Hortons coffee prepared with two creams, two sugars, for y’all American readers) away from being memorialized on some brightly colored, weirdly plasticized Canadian money. Early scenes of the (mostly forgettable) 2009 superhero movie “X-Men Origins: Wolverine” show Wolverine (played by Hugh Jackman) working as a lumberjack in the “Canadian Rockies” — is it British Columbia? Alberta? who cares! — and shacking up (in an actual shack, no less) with telepathic mutant Silver Fox, a member of a First Nations Blackfoot band. In that same film, a scheming American super-villain General Stryker (Danny Huston) tries to bait Wolverine back into his top-secret strike force by pleading, “Your country needs you.” Jackman scowls back, “I’m Canadian.”

James Mangold’s film “Logan” — Jackman’s third, and supposedly final, standalone Wolverine movie, following “Origins” and 2013’s “The Wolverine” — may not play up the character’s Canadian-ness with such wink-nudge conspicuousness. But the film, like Mark Millar and Steve McNiven’s eight-issue comic book series “Old Man Logan” from which the movie is loosely adapted, provide a portrait of Wolverine that is even more profoundly true to the Canadian spirit. Instead of the snarling lumberjack caricature, these stories offer up and imagine Wolverine (a.k.a. Logan) as a man of profound mourning and melancholy, at war with himself, at odds with his past.

Released in 2008, the “Old Man Logan” comics imagine the hard-nosed X-Man living in desolate existence in a near-future America that has been taken over by a cabal of super-villains. The notorious loner withdraws even further inward, following the accidental murdering of most of his fellow X-Men with his lethal adamantium claws (he had been tricked by the Spider-man villain Mysterio, the master of illusions; comics are deeply stupid). He attempts suicide, but the superpowered rate at which his cells regenerate prevent him from offing himself. Pretty dark.

This may not be the posture that jumps to mind when one imagines Canada. Canada, after all, is generally perceived as a nation of friendly hosers in hockey jerseys welcoming their American neighbors with a passive-aggressive politeness plastered on thick as Grade #3 Quebecois maple syrup. There is, however, a forlorn desperation that roils beneath all this — a chilliness worthy of the frostbitten winters that are themselves another weary Canuck cliche. It’s there in Leonard Cohen, in downcast classic Canadian films like “Nobody Waved Good-bye,” it’s even there in Drake, who proclaimed himself the “saddest boy in all of Canada” in a promo for a “Saturday Night Live” appearance. It’s a deep sorrow, the font of which is tricky to accurately pin down. But it’s one that Wolverine wears like a pilled flannel or a blue-yellow X-Men onesie.

A trope that crops up again and again in studies of Canadian literature and fiction is that of the “beautiful losers.” A name borrowed from Leonard Cohen’s second novel, “Beautiful Losers” storylines follow characters striving towards some goal and failing, albeit nobly. It’s a narrative revision of the more American notion of meritocracy: the idea that hard work and white knuckle stick-to-itiveness will invariable be rewarded.

Cohen’s “Beautiful Losers” tempers the heyday of 1960’s liberation and romanticism with paranoia and insanity, with the unnamed narrator’s libertine, politically agitating best friend (known only as “F.”) ending up a syphilitic child molester; the psychedelic dream of the ‘60s, free love, Flower Power era mutating into a toxic nightmare. In the classic 1970 Canadian film “Goin’ Down the Road” — co-written and directed, incidentally, by the father of Drake producer Noah “40” Shebib — a pair of East Coast good ole boys escape the impoverishment of the Canadian maritimes for the bright lights of the Big City (i.e. Toronto), only to be met with a string of soul-crushing disillusionments. And as for Wolverine? Well, his sorrows and losses are many.

Born in Alberta in the 1880s, the mutant who would be Wolverine fled his home after killing his own father, then flees to a Yukon mining camp with his girlfriend, who he also accidentally kills. (Accidentally killing people is a recurring plot in Wolverine stories.) Through his character history, Wolverine racks up more spurned (or dead) lovers than Drake or Leonard Cohen combined: Silver Fox, Jean Grey, Mariko Yashida, Itsu, his “Old Man Logan” wife Maureen (who exists simply so she can be conveniently dispatched as a narrative contrivance), and countless other lovers across various iterations and alternative universes. Given the pain he carries, even his mutant super-power — the ability to rapidly heal, making him essentially invincible and affording him a greatly extended lifespan — feels more like a curse. He soldiers through life, from one historical epoch to the next, slogged down by a soul-consuming trauma.

And so too, beneath all the snowdrifts and heavy flannels and tightly-knit toques, does Canada.

Since 2015, the nation has been grappling with the results from the Truth and Reconciliation Commission, a seven-year investigation into the harm caused to Canada’s indigenous populations by the Canadian Indian residential school system. Funded by the Canadian government and operated by Christian church groups, residential schools formalized the assimilation of First Nations groups into Canadian culture, breaking up families and breeding all manner of abuse (physical, sexual, psychological) in the process. The “civilizing” project of residential schools in Canada and the United States was pointedly summed up by American army captain Richard Pratt. Speaking at the Nineteenth Annual Conference of Charities and Correction in 1892, Prat offered his blunt assimilationist slogan: “Kill the Indian in him, and save the man.”

Beyond unearthing countless stories that effectively — and productively — shattered Canada’s image as some dopily, smiling, morally haughty joke nation, the Truth and Reconciliation Commission (TRC) offered a rare opportunity for Canadians, indigenous and otherwise, to take a long hard look at the country’s colonial past. As the TRC concluded, what was at stake in the process was nothing short of the legitimacy of “Canada’s place as a prosperous, just, and inclusive democracy.” It was a total identity crisis, forcing Canadians to face up to that previously nameless source of their sorrow and melancholy.

There is something in the Wolverine character that has always seemed wrapped up in such sorrow, like the imaginary metal alloy bonded to his skeleton. Beyond his brooding, sarcasm, and heavy sadness, Wolverine is often depicted as a white man (or mutant) with one foot in North American native communities.

In “X-Men: Origins” his doomed Blackfoot lover inspires his animalistic nickname. In an early scene of “The Wolverine” he’s secluded in the Yukon, tortured by dreams of another lover he let die, and seen stalking the forrest alongside a grizzly bear, a man at ease in nature. He fights alongside, and makes love with, another superhero who is simply called “The Native.” In this way, he embodies the fatuous Canadian fantasy of viewing First Nations people as somehow living more authentically, and the dream of wanting to assume the identity of nativeness (Canada recently saw a headline-grabbing literary scandal along these lines, when bestselling author and outspoken First Nations activist Joseph Boyden was questioned about the veracity of his proclaimed native heritage).

What makes Wolverine — and especially the slumped, bedraggled, “too old for this shit” Wolverine of “Old Man Logan” and the new Marvel movie — uniquely Canadian exceeds his wild sideburns, his hipster-lumberjack attire, and his desire to seclude himself in nature like some prototypical, imaginary wild man. It’s the way he’s moulded in his guilt and sorrow. Unlike the bogusly “gritty” superheroes of the post-“Dark Knight”/“Man of Steel” school, Logan’s brooding isn’t just some snarling affectation. It proceeds from historical traumas in which he was implicated, for which he holds himself wretchedly responsible, and with which he must live forever. More than this, despite his sulking and isolation, he never submits to the nihilism of defeat.

“Logan” finds Jackman’s Wolverine out for one last slice-and-dicing hurrah, saving a young mutant whose past is inextricably wrapped up on his own. While remaining painfully connected to his history, he trudges ever forward in the spirit of duty and cautious rapprochement. That he wears it so wearily is what elevates the character above so many in Marvel’s stable. And it’s what will make the character endure, long after Jackman’s hung up his prosthetic sideburns and claws. Even a reinforced metal skeleton buckles under the weight of such a heavy history.