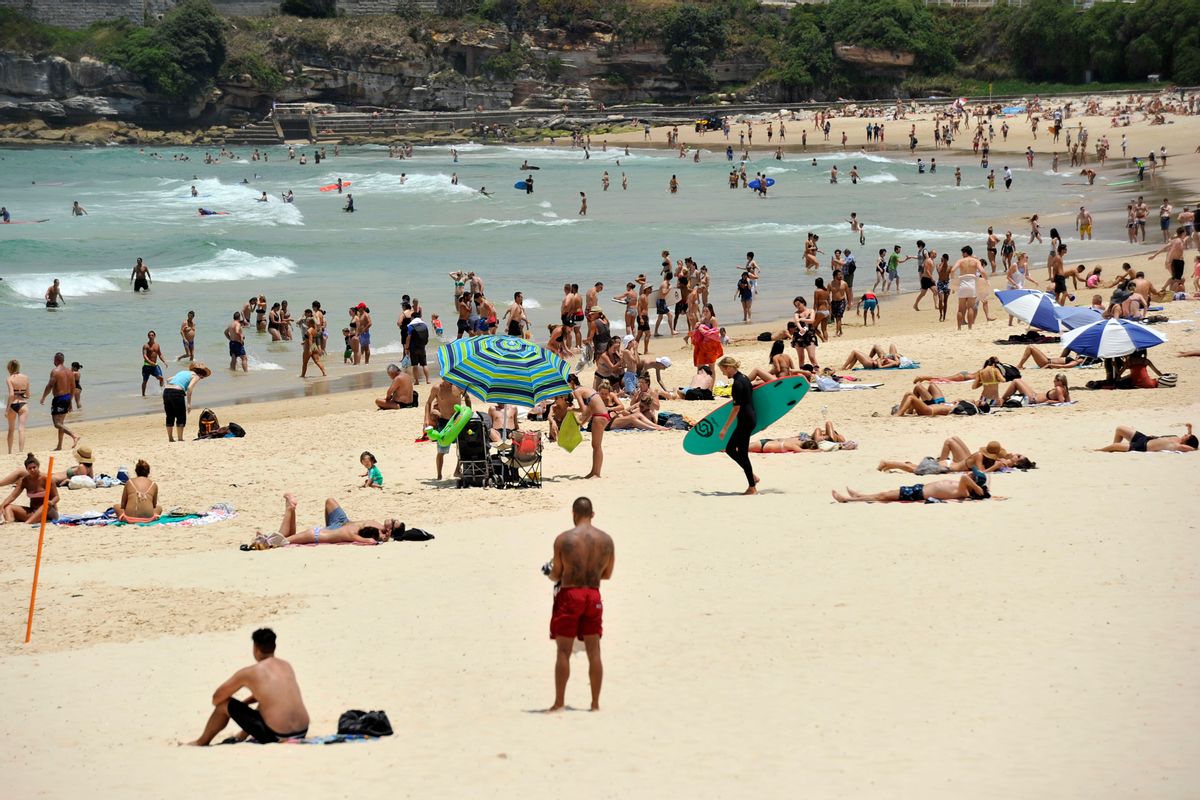 In this Tuesday, Dec. 13, 2016 photo, people gather on the sand at Bondi Beach in Sydney, Australia. Sydney residents sweltered through the city's second hottest night on record and its hottest December night in 148 years, with many cooling off at beaches long after dark. A minimum of 27.1 degrees Celsius (80.8 degrees Fahrenheit) was recorded in Australia's largest city early Wednesday, Australian Bureau of Meteorology forecaster Jordan Notara said. () (Joel Carrett/AAP Image via AP)
--

Australians are no strangers to stifling summer weather, but the unrelenting heat of the past few months in the country’s southeast has put this summer in the record books. Now, a new analysis links that heat directly to climate change, finding warming made such events up to 50 times more likely and hotter.

Three major heat waves struck the southeast of Australia through January and February, with the worst of the heat coming during the last event, from Feb. 9-12. During that time, many places recorded temperatures over 113°F (45°C); New South Wales as a whole broke the record for hottest February day twice, with more 93 percent of the state recording temperatures 18°F (10°C) above normal on Feb. 11.

But it wasn’t just those particular heat waves that made the summer notable, it was also the persistence of above-average temperatures in between those more extreme bouts. One-third of New South Wales had 50 days of temperatures at or above 95°F (35°C), and both the state and Sydney had their hottest summers on record.

The relentlessness of the heat significantly impacted the everyday lives of those affected.

“It affected EVERYTHING I did – if and when I took the dog for a walk to the park. What did I cook for dinner or did I even cook because it was too hot? What room was the coolest to sleep in? What time of day should I hang the washing out? Should I go into work, or would the trains be delayed because of the heat?” Sarah Kirkpatrick, a climate scientist at the University of New South Wales who worked on the analysis, said in an email. “It seemed to be this never-ending cycle and certainly made summer feel much hotter than normal.”

"It’s only going to get worse"

That human-caused warming is boosting summer heat waves in Australia has been shown by many attribution analyses, which use observations and climate models to look for the fingerprints of climate change in extreme weather.

And these heat waves are only a taste of what the future will hold without reductions in the greenhouse gases that are driving global temperature rise, posing serious concerns for human health, agriculture and infrastructure like the electricity grid.

“Climate change already has a detectable influence on heatwaves in Australia,” Kirkpatrick said. “As human influence on the climate increases so will this signal ­— it’s only going to get worse.”

A trend toward more and more frequent heat waves has already become clear in many places, including Australia, where it has become particularly pronounced over the past 20 years, according to the Bureau of Meteorology.

Earlier studies have found a clear climate change signal in extreme heat events in Australia, including the record-hot year of 2013.

She and colleagues in Australia and the Netherlands conducted similar assessments for this summer in what is called rapid attribution analysis, where scientists use established, peer-reviewed analysis methods to analyze the role of climate change in the days and weeks after an event. The effort was part of a Climate Central research initiative called World Weather Attribution.

Analyses of both the February heat wave and the summer heat as a whole showed a clear climate change signal.

"No doubt" in climate influence

The team used climate models to compare how often a heat wave as extreme as the one in February would occur in New South Wales in a climate with and without human-caused warming. They found that it was twice as likely in today’s climate, going from a 1-in-240-year event without warming to a 1-in-120-year one with warming factored in — still relatively rare, but significantly more frequent.

They used both model comparisons and observations to look at how much more likely the summer heat as a whole was with climate change. They found that the average summer temperatures experienced in New South Wales were at least 50 times more likely than they were in 1910, before warming had a big impact on the climate but when reliable observations were available.

The maximum temperatures experienced over the same area were 10 times more likely with warming, going from a 1-in-500-year event to 1-in-50 year event.

Temperatures were also likely about 1.8°F (1°C) more intense because of warming, the team found.

“There is absolutely no doubt down here that climate change is already influencing extreme weather, particularly extreme heat and very high fire danger weather,” Will Steffen, a climate scientist at Australian National University who wasn’t involved with the analysis, said in an email.

On a more local level, where weather variation is much higher and so a signal is more difficult to tease out, they found that while the February heat wave in Canberra was at least 50 percent more likely with warming, no clear signal could be pulled for Sydney because of the high variability there.

“It doesn’t mean we won’t be able to detect a signal behind future events,” Kirkpatrick said.

And in the future, the frequency and intensity of such heat waves will increase even more. Summer heat like that experienced in New South Wales could become a 1-in-5-year event once temperatures are 3.6°F (2°C) hotter. That is the amount countries have pledged to limit warming by; when such a level is reached depends on how much greenhouse gas emissions are reduced and how quickly.

“We do expect to get more heatwaves than we used to and this is being borne out. In the future this will only get worse unfortunately,” team member Andrew King, of the University of Melbourne, said.