Hey, Trump voters: This fiasco is what you get when you "experiment" with the presidency 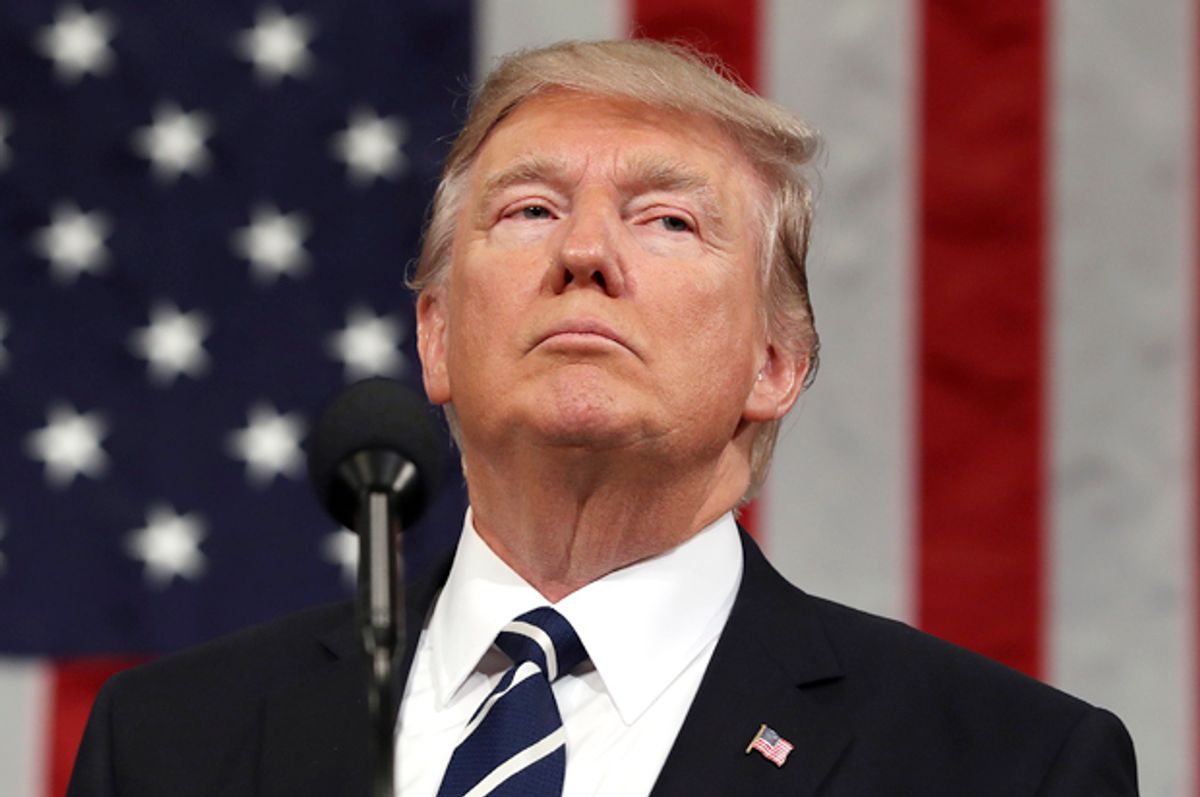 Columnist Michael Gerson has described President Donald Trump as living in “the eternal now.” In other words, Trump doesn’t really consider the past or the future in his decision making, especially when it comes to his knee-jerk blurtings, be they on Twitter or during a rally or whenever he’s within spitting distance of a microphone. Everything for Trump is about getting through the moment. Everything is a reaction to something he just watched on television.

Not surprisingly, “the eternal now” also rings true of the modern conservative movement that for many years now has abandoned integrity in favor of saying the exact opposite of whatever the opposition is saying, even if that means flagrantly contradicting previous conservative positions. For example, Obamacare was mostly a Republican plan, a proto-version of which former Gov. Mitt Romney implemented in Massachusetts. But since it was passed during the Obama administration nationwide, it must be killed. Or naturally there's the sudden affection for Russia and Vladimir Putin by Trump conservatives, even though so many of them are on record for having previously criticized Putin’s strongman leadership. Call it “opposite day politics.”

Trump’s “eternal now” is also illustrated by the fact that he routinely and accidentally engages in perhaps the dumbest politics we’ve ever seen from a chief executive. Specifically, Trump has repeatedly verified the authenticity of leaks by screeching about the leaks' being a violation of national security and classified information. Naturally, if the leaks were merely fabrications of the press or, as Trump has claimed, the Democratic Party, he would say so. Instead, he has stupidly confirmed the veracity of the leaks, despite his inexplicable claims that the “reporting is fake.”

Likewise, during his most recent weekend excursion to Mar-a-Lago, Trump accused former President Obama of personally ordering wiretaps at Trump Tower. We’ll get into why he did this presently. But once again, Trump undermined his own case — stupidly and without any view of the long game. Last week I suggested there was no “three-dimensional chess” happening in the Oval Office, and Trump's weekend tweets vindicate that observation.

In this case, Trump has successfully if inadvertently coaxed his most loyal fanboys to support a complete and thorough investigation of Russian interference in the 2016 election cycle, believing the findings will confirm his ludicrous claims about Obama administration wiretaps. Instead, investigations may well lead to evidence that Trump colluded with Russia to hack the Democrats' accounts and skew the election using the “damn emails.” (It’s entirely possible that the FBI, with legal permission from the Foreign Intelligence Surveillance Court, wiretapped Trump Tower. It’s against the law for any president to personally order such taps.)

Again, this was stupid, stupid politics emerging from a thoughtless, nearsighted dunce.

Trump appears to feel empowered by his loyalists to ignore the written and unwritten rules and traditions of the presidency, allowing his “eternal now” instincts to appear in the most obnoxious ways possible. Hence all this ridiculousness. While it might seem to many that a disruption psycho bomb might have been just the thing the system needed to drain the swamp or whatever, Trump was absolutely the wrong man for that post. (Some would argue Bernie Sanders was the guy to do it.)

What we’ll all soon learn, if we haven’t already, is that the presidency isn’t something to be monkeyed with. Trump is proving with every blurt and every drip-drip of Russia revelations that 62 million American voters frivolously experimented with the presidency, and this is what we get when the electorate is suckered into a historically colossal mistake.

The consequences of this mistake have yet to be fully revealed, but they will be — and soon. Trump’s shocking tweets about wiretaps and Obama’s (unproved and likely nonexistent) involvement could very easily slip into a constitutional crisis such that one side of the debate is calling for the arrest of Trump while the other side is calling for the arrest of Obama. The only problem here is that the latter’s argument is silly and the former’s argument is entirely plausible, according to former National Security Agency analyst John Schindler. Unless Trump makes a move to shield himself from prosecution, it’s an increasingly likely scenario. Oh, and there’s a really solid chance he’ll abuse his power to keep himself out of jail.

Along those lines, the tweets about Obama grow more sinister when we view everything through the prism of President Recep Tayyip Erdogan of Turkey who has emerged as a Putin-style autocrat, arresting dissidents under the pretext of punishing alleged plotters of an attempted coup there. Steve Bannon and Trump could be setting up a similar chain of events, suggesting that they need to combat a possible coup by the alleged “deep state” — a shadow government composed of rogue intelligence operatives tasked with ousting Trump from power. Perhaps Sen. Ted Cruz’s dad is a conspirator — and the Illuminati, using chemtrails and lizard people. Who knows? The full extent of the conspiracy theory that Trump and Bannon might be working on is unclear, but it could contribute to a White House pretext for arresting disloyal government agents and bureaucrats, perhaps eventually journalists and civilians.

The conservative entertainment complex is ready to play its part in all this. Indeed, the wiretap story wasn’t something Trump overheard during one of his daily briefings, which, by the way, he’s spent less time attending than he’s spent on Twitter — yes, really. This was merely something Trump read about on Breitbart, which quoted nasal talk-show host Mark Levin. And now, with no evidence or substantiation, the White House is pursuing this Obama angle. We have a president who is willing to accept without question things he sees on Fox News or reads on Breitbart. One of Trump's other often-cited sources is "Fox & Friends," which rivals “Vanderpump Rules” as the least intellectual show on television.

So who will stop him? Who will stand up to Trump when he takes all this too far? (And he will.) It certainly won’t be the ignorant voters who think he’s righteously disrupting the system. It doesn’t appear it’ll be Republican leadership either, since Sens. John McCain and Lindsey Graham are the only Republicans showing the balls to watchdog Trump from the GOP side of the aisle.

There’s a reason why certain traditions and points of decorum are in place. It’s too easily a corruptible post and it’s the traditions of the office that prevent the president from slipping into despotism. Trump and his disciples have zero regard for these rules of the game, as evidenced by the president's ongoing and embarrassing public behavior. Now that Trump thinks his mandate is to disrupt the system, a million unforeseen things could come crashing down on our heads — not to mention on the heads of those 62 million voters who thought the presidency and the free world needed a tyrannical Batman villain in the White House.