Both sides of the Texas "bathroom bill" argue for safety and equal protection, but only one side is being honest 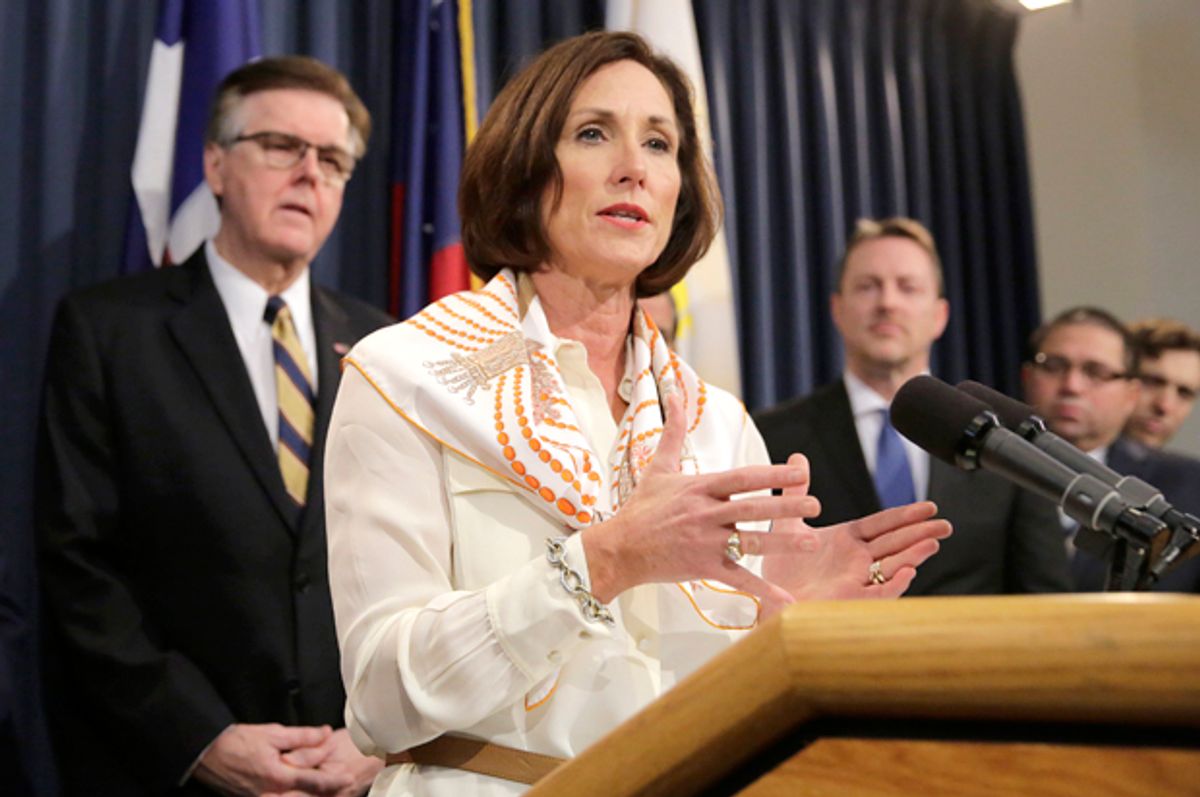 Lois Kolkhorst, backed by Dan Patrick and other legislators, talks to the media during a news conference to discuss Senate Bill 6 at the Texas Capitol, Monday, March 6, 2017, in Austin, Texas. (AP/Eric Gay)
--

A legislative hearing for State Bill 6, legislation that would bar trans people from using bathrooms that match their gender identity, is scheduled for Tuesday in Texas. Things were tense in the capital city of Austin on Monday, as supporters and opponents of the bill both held press conferences claiming to be progressive-minded privacy advocates who just want people to be able to safely use the bathroom. But only the pro-trans forces were expressing their views honestly.

The conservatives' press conference was, no surprise, drenched in disingenuous rhetoric. Speakers, including Lt. Gov. Dan Patrick and state Sen. Lois Kolkhorst, a sponsor of the bill, expended a great deal of effort trying to conceal the bill's actual purposes, though there were occasional flashes where the sadistic, gender-policing agenda could be seen.

Kolkhorst tried to portray herself as a feminist, mentioning a recent op-ed she authored for which she swiped Hillary Clinton's famous proclamation that "women's rights are human rights" to claim that "young men who are curious or hold more nefarious goals" will be able to rape and molest others in ladies' rooms without any fear of legal reprisal.

This is, of course, false: Letting trans kids use the bathroom does not turn bathrooms into lawless spaces. Plenty of communities have anti-discrimination laws, and rape continues to be illegal.

Joining Kolkhorst was North Carolina Lt. Gov. Dan Forest, who supported a similar law in his own state. The two borrowed plenty of progressive-sounding words like "nondiscriminatory" and "privacy and safety and protection for all people."

Forest even tried at points to insinuate the bill is pro-trans, repeatedly insisting that it's about "reasonable accommodation" and comparing it to the Americans with Disabilities Act. In reality, the opposite is true. The ADA is about making it easier for people to live their lives, whereas SB 6 bars trans people from having safe access to public bathrooms.

Patrick tried to portray SB 6 as "bipartisan," but the one Democrat in the state Senate who supports the bill, Eddie Lucio, is a social conservative who also opposes abortion rights.

Lucio also wallowed in disingenuous posturing, claiming that he was interested in "compassion, sensitivity and respect." He went on to imply that true "compassion" lies in treating trans kids as if they were mentally ill and needed "guidance" to live with the gender they were assigned at birth.

The American Academy of Pediatrics does not view transgender children as mentally ill and in need of correction, but instead argues the mental health of children is better protected with "supportive and affirming communities." Barring them from using the bathroom they prefer in the hopes that they will conceal their gender identity is not supportive or affirming.

The bad faith was perhaps most apparent in the contradictory message being pushed by Patrick and his team of tight-mouthed Bible brandishers. On one hand, Patrick suggested that without this law, women's bathrooms across the Lone Star State would become hunting grounds for sexual predators. Then he and the other speakers assured listeners that this bathroom bill doesn't cover all bathrooms, just the ones in schools and government buildings.

If Patrick really thinks that rapists will use trans accommodation laws to hide in women's rooms and attack women, then why wouldn't he pass a law that covers all bathrooms? If we need these laws to protect us from an epidemic of sexual assault, it seems odd to not have the law cover restaurants, bars, gyms and shopping centers.

But of course, as Patrick has been repeatedly told, there's no reason to believe that anti-discrimination laws cause rape. Limiting the law to schools and public buildings reads as an implicit admission that the rape story is just cover for the real agenda, which is making it difficult for trans people to use the bathroom in peace.

Patrick maintained his faux-progressive mask for much of the press conference, claiming that he's not trying to hurt trans people. Toward the end, however, the mask slipped and he started talking about "men in the ladies' room," an overt suggestion that trans women's gender identity is not real.

Outside on the steps of the Texas Capitol, opponents of the bill, organized by the Transgender Education Network of Texas, spoke out in favor of trans rights.

Rev. Carmarion Anderson, a minister from the Dallas area, read from 1 Corinthians to argue for the acceptance of trans people like herself.

"But by the grace of God I am what I am, and his grace toward me was not in vain," she read, before adding, in her own words, "Do the right thing. Extend us grace."

Anderson also mixed in some blunt talk, saying she objects to having to indulge "a conversation about where I piss and shit, and that is not appropriate."

The vulgar language, especially coming from a minister, made the audience giggle. But it also underlined Anderson's point, which is that conservatives are invading the privacy of trans people and trying to stigmatize them over basic bodily functions that cisgender people are allowed to attend to peacefully.

"If your concern is what's in children's pants, then maybe you are the one who is behaving inappropriately," Frank Gonzales, the father of an elementary-age trans girl, said in another speech.

Multiple cities and states across the country have passed nondiscrimination laws that enable trans people to use the bathroom corresponding to their gender identity, and there is no evidence that these laws have led to rape.

Many of these laws aren't exactly brand-new, either. Iowa's anti-discrimination law was passed in 2007, Rhode Island passed one in 2001 and Minnesota has protected the right of trans people to pee in peace since 1993. In Texas, the city of Fort Worth passed such a law in 2009, Austin passed one in 2004 and Dallas did so in 2002.

“This wasn’t an issue a year ago," Patrick complained at the press conference. "It came from nowhere!”

This whining once again demonstrates the bad faith on display by the anti-trans crowd. The only reason this has become an issue is because right-wing activists decided to make it one.

Why are conservatives throwing tantrums now, after mostly ignoring these laws for years? The likeliest reason is that public hostility towards marriage between same-sex couples has been steeply declining, making it harder for the religious right to use the issue to organize their followers. Attacking trans people is an attempt to create a new issue to organize the religious right around.

It's sad but SB 6 has a strong chance of passing. Texas' legislature is dominated by right-wing Republicans and is willing to rubber-stamp all sorts of hateful nonsense into law.

Still, it's telling that the anti-trans forces are already feeling so defensive that they're trying to hijack progressive language to muddy the waters. It suggests that picking on trans kids is not the right political battle and that this effort doesn't bode well for the religious right cause in the long run.