Lessons in resistance from MLK, the "conservative militant"

What does it mean to resist and how can Americans make sure that their resistance is effective? 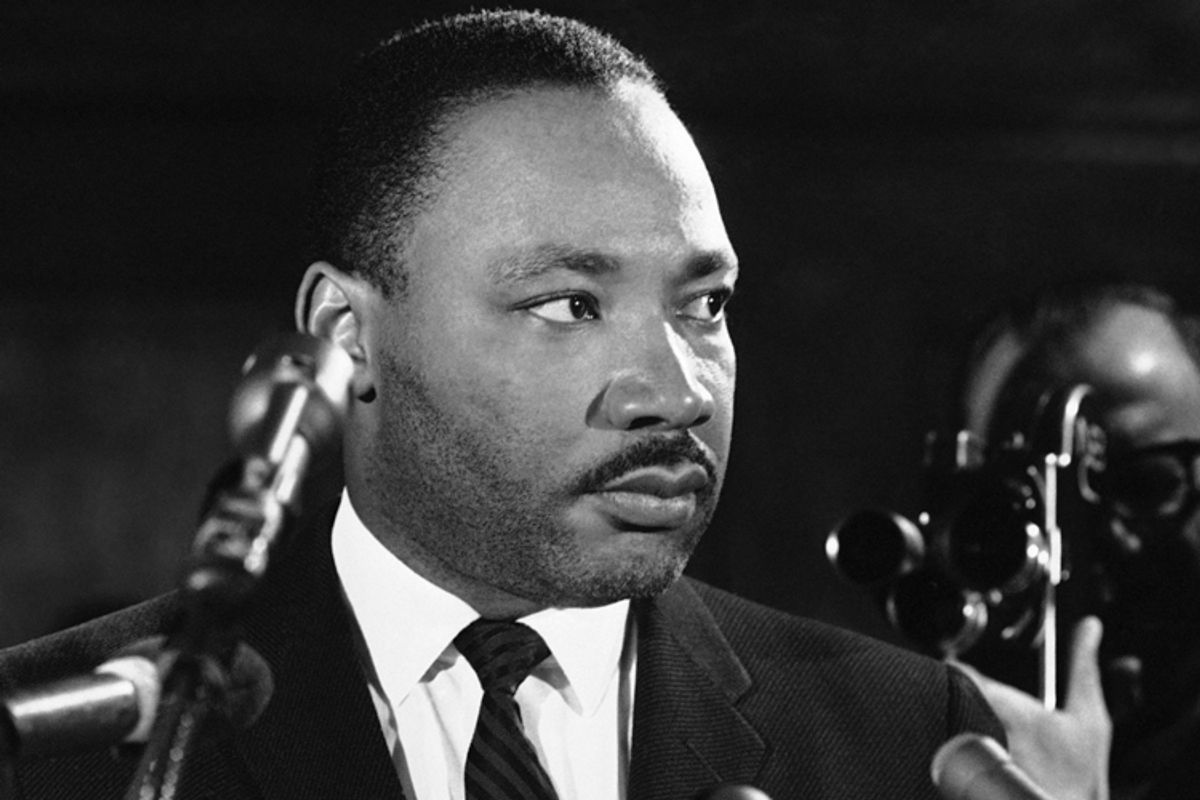 Just days after President Donald Trump’s inauguration, activists from Greenpeace climbed up a large construction crane near the White House and unfurled a large banner with the single word: Resist.

On Feb. 11, thousands of protesters used their bodies to spell the word “resist” on a San Francisco beach. The next day, at the Grammys, rapper Q-Tip yelled “resist” no less than four times from the stage.

And on Feb. 26, at a rally outside Washington, Maryland Congressman John Delaney said to the audience,

What do we have to do? We have to resist. This is a defining moment. It’s stirring our hearts and stirring our emotions and we’re committed to resisting with you.

All of these examples speak to a widespread and resolute discontent with the election of President Trump. They express a rejection of his agenda and of what they see as his degradation of our democracy. “Resist” reflects their desire, insofar as they can, to stop this from happening.

But what exactly does it mean to resist? And most importantly, how can Americans make sure that their resistance is most likely to effect change?

I have studied the words and actions of Martin Luther King for decades. King led one of the most successful, nonviolent resistance movements in American history. I believe his example is especially germane to these questions.

What can today’s resisters learn from King and the civil rights movement?

In the words of historian August Meier, who wrote a seminal book, “Negro Thought in America, 1880-1915,” published in 1963, King succeeded because he was “a conservative militant.”

The word, “conservative” has a specific meaning here. King was a democratic socialist, he opposed the Vietnam War and he called for massive investment in the inner cities. He was not conservative in any political sense. But what Meier showed was that King nevertheless manifested a conservative core – one that resonated with millions of Americans and thereby helped achieve the movement’s remarkable success.

American history shows that for any reform movement to succeed, it must attain respectability. It must attract moderates, even conservatives to its rank.

King understood this. And to that end, he was indeed conservative – both in the arguments he made and the manner in which he presented them.

King argued that racism in America meant the United States was not living up to its own ideals. At the very core of the Declaration of Independence and thus at the center of American life was the belief that “all men are created equal.” But in America in the 1960s, and especially in the South, African-Americans lived out their lives as second-class citizens. In King’s words, American culture was “the very antithesis” of what it claimed to believe.

King did not want to challenge, let alone replace, ideals of freedom and equality. He wanted America to better embody them. He argued that the civil rights movement was just the latest in a long American tradition that was both grounded in those ideals and sought to make them more authentic.

King compared the civil rights movement with the abolitionist movement, the populist movement of farmers and laborers in the late 19th century, and even to the American Revolution itself. The American ideal “all men are created equal” constituted what King called a “promissory note.” In each case, ordinary citizens demanded that that promise be honored. And through their actions, the nation was made more free and more just.

By framing the cause of civil rights in words and ideas that most Americans strongly identified with, King was able to appeal to their innate patriotism. What’s more, those who stood against his cause were, by implication, the ones who could be seen as un-American.

King’s resistance was also strictly nonviolent. Following the model of civil resistance developed by M.K. Gandhi, leader of Indian independence, King argued for nonviolence within the terms of his own Christian faith.

King said that by responding to injustice with civility and to violence with nonviolence, the resister was fulfilling “the Christian doctrine of love.” For King, that love was best reflected in the Greek word “agape,” an “understanding, redeeming good will for all men, an overflowing love which seeks nothing in return.” This was the love that Christ epitomized, and which his followers were called to emulate.

But King also insisted that nonviolent resistance spoke to a respect for the law that can only be called conservative. In his Letter from Birmingham Jail, where he was imprisoned in 1963, King insisted that while unjust laws must be broken, they must be broken “lovingly,” such that the act demonstrates a respect, even a reverence, for the law.

King argued that this nonviolent strategy was not simply the most Christian response. It was also “the most potent instrument the Negro community can use to gain total emancipation in America.” He said that violent protests gave the white man “an excuse to look away,” to ignore those who want to claim the mantel of equality.“

Conducting the struggle "on the high plane of dignity and discipline,” dressing well, using respectful language and accepting violence without responding in kind: All this gave protesters a moral standing that attracted moderates to the cause. It also sought to change the hearts and minds of the bigots, but even if that effort failed, the bigots were nevertheless defeated.

The Jim Crow system of racial segregation rested on the idea that African-Americans were inferior to whites. By rigidly adhering to the high road, the actions of protesters proved that that entire system was based on a falsehood.

Indeed, if anything, actions on both sides demonstrated the opposite.

Many protesters in the 1960s sought to bring down an established order that they saw as irredeemably racist and corrupt. But to those who said:

The fundamental purpose of resistance was to effect political change and that meant operating within existing political institutions.

It also often required compromise. For example, at the 1964 Democratic National Convention, a crisis developed when the newly created and integrated “Mississippi Freedom Democratic Party” demanded they be recognized and seated instead of the all-white “official” Mississippi delegation. They argued they were the truly democratic representatives of the state as they were the product of procedures fair and open to all.

Party leaders worked out a compromise that allowed the Mississippi delegation to remain. King accepted this compromise, but many advocates condemned it as an illegitimate accommodation to racism.

King did not disagree, but he argued that this face-saving gesture would help to ensure that the South would not abandon then-candidate Lyndon Johnson. One year later, President Johnson signed the Voting Rights Act, which ensured voting rights for all African-Americans, and brought federal control over elections in the South.

The notion of conservative militancy likely does not, however, resonate with today’s resisters. For many of them, this moment is an opportunity to grow and strengthen the left either within or outside the Democratic Party; for some, it is an opportunity to move beyond the two-party system altogether.

But within the civil rights movement, similar designs were often met with the operating principle: Keep your “eyes on the prize.” What it meant was that individuals should not allow themselves to be distracted. Rather, they should continually orient themselves and their actions such that they advance the movement toward the ultimate goal.

Right now, many Americans contend that longstanding democratic procedures, norms and ideals are under attack. Because they seek to defend those core American ideals, those who resist have become, by default, conservatives and patriots.

Contemporary resisters would therefore do well to remember King’s example.

By accepting their own role as “militant conservatives” and accommodating their actions accordingly, they are more likely to resist effectively, and thereby achieve the ends they seek.