GOP's health care tax swindle: Tax cuts for the rich financed by taking coverage from everyone else 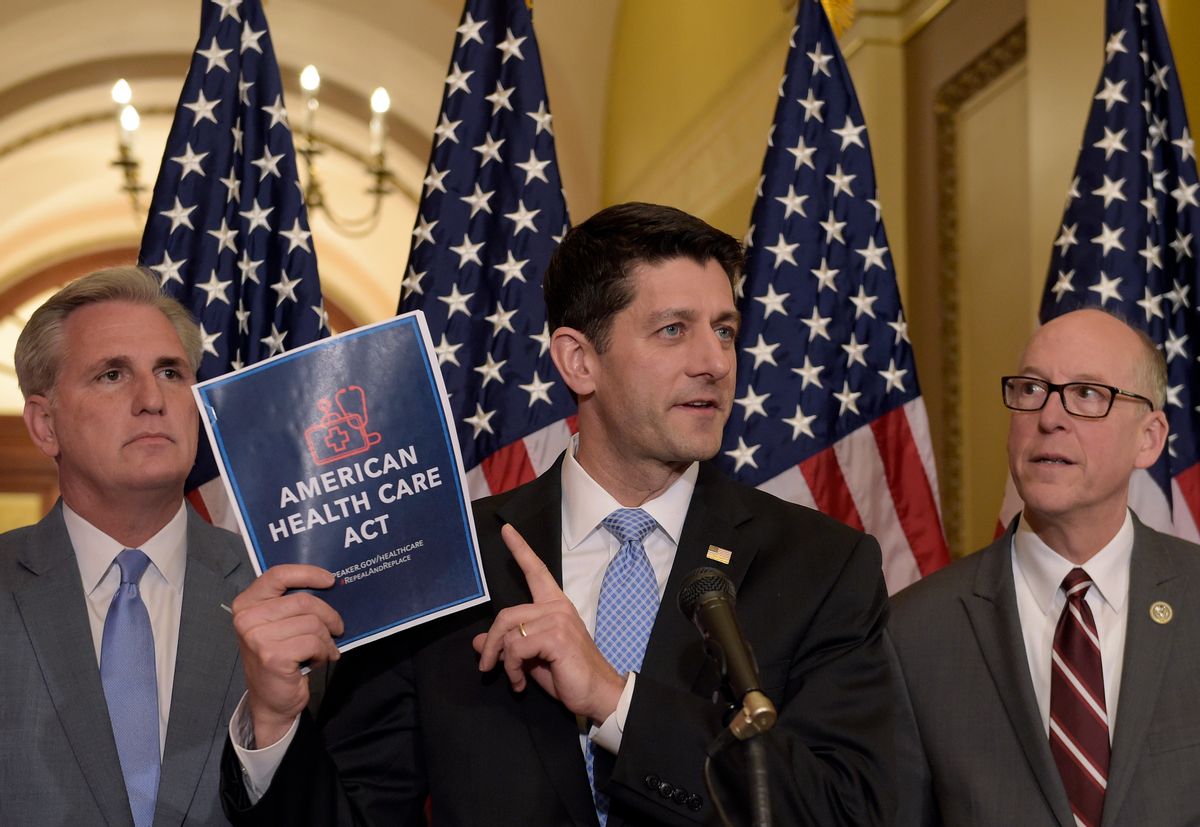 One could go on at length about how terrible a piece of legislation the American Health Care Act is. The bill, crafted by House Speaker Paul Ryan and firmly backed by President Donald Trump, seemingly goes out of its way to heap additional financial hardship on the people who need the most help obtaining health coverage.

If the legislation as it currently stands were to pass, low-income people would have their premium subsidies cut, older people would face higher premiums and sick people would have to cope with higher deductibles. The Affordable Care Act’s Medicaid expansion would be halted under the AHCA, and Medicaid’s funding would be slashed.

It’s just an awful, awful bill that solves no problems with the health care system, worsens existing ones and has little political support outside the Republican congressional leadership and the White House.

That said, the American Health Care Act does accomplish one important Republican policy goal: It rains down tax cuts and other goodies on the rich.

As I wrote yesterday, the Affordable Care Act is, in the simplest terms, a law that redistributes wealth from the rich to lower-income people so that they can purchase health insurance. The ACA’s premium subsidies are funded, in part, by taxes on the rich. The American Health Care Act repeals two taxes imposed by the ACA that fall exclusively on high earners: a 0.9 percent Medicare surtax on wages and a 3.8 percent tax on investment income. Shedding those two taxes amounts to a total tax cut of about $275 billion.

As you would probably expect, all that money would go right back to those high earners. According to the Center on Budget and Policy Priorities, nobody making less than $200,000 annually would see one red cent from these tax cuts. People who make $500,000 to $1 million annually would receive a relatively modest $4,700 tax break. The real winners of this policy would be millionaires, who would gain an average tax reduction of $54,130. Per the center's estimates, the top 400 earners in the country (whose annual incomes exceed $300 million) would find their taxes sliced about $7 million apiece as a result of this policy.

All told, the center estimates that by 2025, a full 57 percent of the tax cuts in the American Health Care Act would flow to people making more than $1 million annually. The rich are the big winners here.

On a policy level, this is hard to justify. Paul Ryan and the rest of the bill’s supporters want to eliminate the revenue raised by the Affordable Care Act and replace it with nothing. But at the same time, they’re proposing to continue subsidizing health insurance for lower-income people, albeit at a far reduced rate. The Republican leadership is hoping that steep spending cuts will somehow make the math work, which is why Medicaid is on the block. But the fact that Ryan and Republican leaders are pushing forward on this bill without waiting for an estimate from the Congressional Budget Office is a pretty strong indicator that they know the numbers just don't work.

As a political matter, this whole scheme is fraught with peril. The first major legislative push by Republicans after taking control of the government is, at its core, a tax cut for millionaires financed by slashing health care benefits for poor and elderly people. The bill would almost certainly leave millions of Americans uninsured or with higher out-of-pocket medical costs, all in the pursuit of reducing the tax burden for people like Donald Trump.

Giving rich people more money is, of course, the thrust of most Republican policymaking these days, and the bill’s supporters don’t seem to care all that much that they’re stumbling into a minefield. Ryan went on Tucker Carlson’s Fox News show this week to defend the bill, and Carlson brought up the political danger posed by eliminating the Obamacare tax on investment income.

“It’s kind of a hard sell to say, ‘Yeah, we’re going to repeal Obamacare, but we’re going to send more money to the people who have already gotten the richest over these last 10 years,’” Carlson told Ryan.