To win, the anti-Trump resistance must learn from the Clinton campaign's mistakes 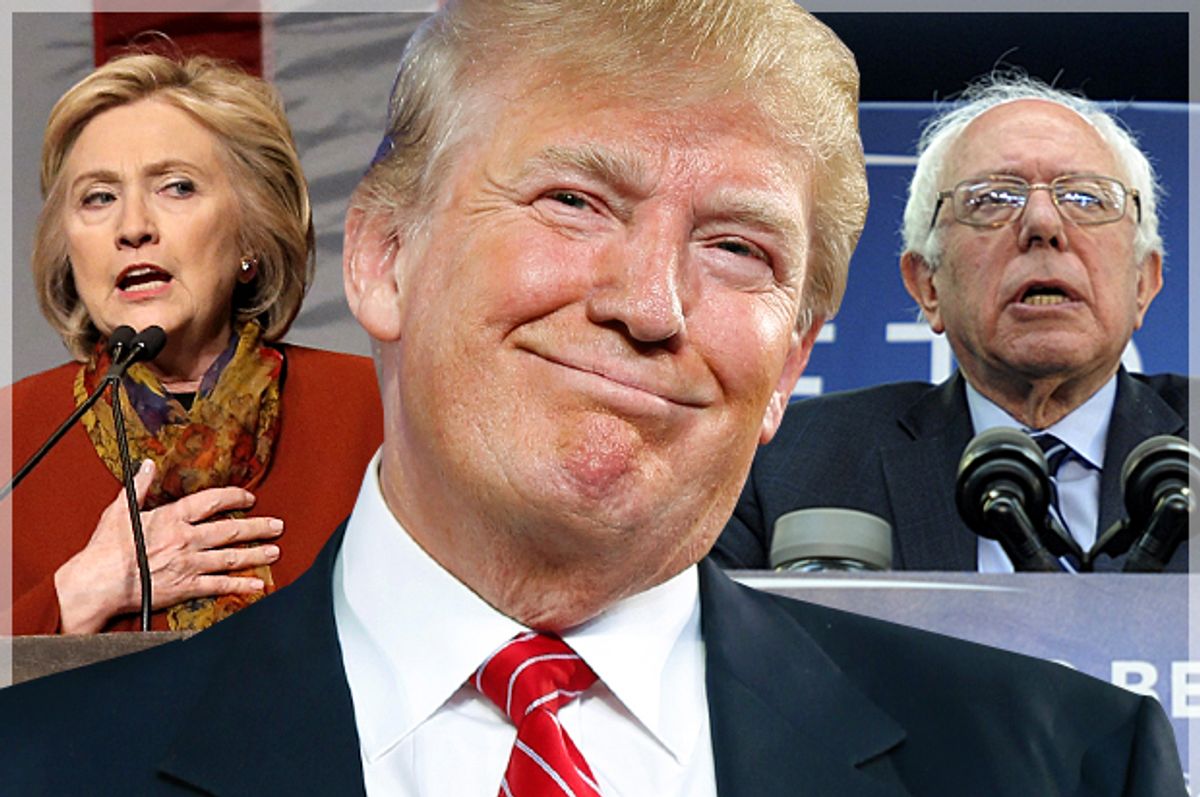 Of all the strategic blunders made by Hillary Clinton's presidential campaign, the most consequential — apart from neglecting the Rust Belt states — may have been the campaign's ill-advised decision to portray Donald Trump as an outlier in the GOP who did not represent true Republican values.

In the early stages of her campaign, Clinton went out of her way to defend the Grand Old Party's reputation and highlight some of the conservative critiques of Trump, so as to emphasize her opponent’s uniquely "deplorable" nature. The Democratic candidate even tried courting “Never Trump” conservatives at one point and featured Republicans in a series of TV commercials endorsing her over Trump:

“I thought I would be able to support whoever the Republican candidate was. I always have,” reflected a Republican woman in one ad. “But with Trump on the ballot, I just can’t. He does not hold my values or the values of the party.”

In the end, of course, this effort backfired spectacularly. It did more to alienate progressives and boost Trump’s underdog status than it did to attract moderate Republican voters — in no small part because “moderate Republicans” no longer exist. While progressive critics had warned of this happening throughout the campaign, Clinton and her surrogates often seemed more comfortable with courting disaffected Republicans than reaching out to left-wingers and working-class voters.

This was evidenced by an audacious prediction from Sen. Chuck Schumer during the Democratic convention: “For every blue-collar Democrat we lose in western Pennsylvania, we will pick up two moderate Republicans in the suburbs in Philadelphia, and you can repeat that in Ohio and Illinois and Wisconsin.”

Now four months after Clinton’s stunning loss and the nationwide collapse of the Democratic Party, liberals are still trying to figure out how this all happened and how their party can rebound in 2018. Luckily, President Donald Trump is proving to be a great ally in this effort. The president’s approval rating is currently hovering at a historic low of 40 percent, and his erratic behavior and extreme rhetoric have provoked mass protests and national unrest. Across the country Republican politicians have faced angry constituents at town halls that are reminiscent of the heated confrontations encountered by Democrats in 2010. At times, it seems like Trump is actively working to help the Democrats stage a comeback in 2018 — and there is clearly a great opportunity for them to do so.

There is also a good chance, however, that Democrats will overplay their hand by exaggerating Trump’s flaws while underestimating their own. And the simple reality is that the Democrats — who have lost control of all three branches of government, along with the majority of state legislatures and governorships — have at least as many problems as the incompetent and unpopular Trump administration.

Fortunately, these problems were encapsulated by the Clinton campaign. If Democrats can learn from Clinton’s doomed presidential run, they can avoid her fate in 2018 and 2020.

Even though Trump was the most unpopular presidential candidate in modern history (just as he is the most unpopular president), Clinton’s reputation as a creature of the establishment without a populist bone in her body led to Trump’s unthinkable victory. While Trump was (and still is) widely despised, the political establishments were (and still are) even more detested. When the Clinton campaign started embracing “Never Trump” Republicans — as if to form an establishment coalition against the populist menace — her fate was sealed. To form a successful movement to combat Trump in the years ahead, the Democrats would do well to adopt a populist message of their own and embrace the progressive movement that emerged through the Bernie Sanders campaign.

Needless to say, not all Democrats are prepared to learn from the failures of 2016. In fact, many are currently doubling down on the Clinton campaign’s approach to Trumpism. At times it seems as if the “resistance” is more welcoming to neoconservatives and repentant right-wing loons like Glenn Beck than to left-wingers who dare criticize the Democratic Party.

Consider a recent column from Vanity Fair’s James Wolcott, “Why the Alt-Left Is a Problem, Too,” in which the cultural critic lambastes left-wingers whom Clintonites have begun calling the “alt-left” on social media. The alt-left, according to Wolcott, is made up of “dude bros” and “purity progressives” who read Jacobin magazine and The Intercept and “exert a powerful reality-distortion field online,” while fostering “factionalism on the lib-left.” While this is essentially an updated version of the discredited “Bernie bro” narrative (that leftists are mostly young white guys), which the Clinton campaign pushed during the Democratic primaries, Wolcott’s real gripe with the left is revealed toward the end of his piece:

There’s a confluence between the alt-right and the alt-left regarding Vladimir Putin and the ratfucking (to use a venerable Watergate-era term) performed by Russian hackers, trolls, and bots. The alt-right and the alt-left press foreheads for a Vulcan mind-meld [in their] belief that the real enemy, the true Evil Empire, isn’t Putin’s Russia but the Deep State, the C.I.A./F.B.I./N.S.A. alphabet-soup national-security matrix.

And there you have it! Wolcott and other Clintonites — the alt-center? — are angry with left-wingers because they haven’t jumped onto the “Trump is a Russian spy” bandwagon, and have cautioned liberals to not get into bed with the intelligence and security establishment — just as they cautioned Clinton to not embrace neocons who helped orchestrate the Iraq War. To hell with that, said Wolcott: “If the Deep State can rid us of the blighted presidency of Donald Trump, all I can say is ‘Go, State, go.’”

The grand irony here, of course, is that liberals — not leftists — are the ones who have started to sound increasingly like alt-right conspiracy theorists. While alt-right Info-Warriors spew their conspiracy theories about the deep state's planning a coup against Trump or about former President Barack Obama's wiretapping of Trump Tower, liberals have gone in the other direction, embracing their own overwrought conspiracy theories with an all-powerful Vladimir Putin at the center of it all.

But Putin is not responsible for the Democratic Party's losing control of nearly 1,000 state legislature seats and all three branches of government during the Obama years. While most people on the left seem to agree that there should be a special prosecutor appointed to investigate Russia’s interference in the election (along with any possible kind of involvement the Trump campaign may have had), the Russia hysteria has essentially become an excuse for establishment Democrats to avoid taking responsibility for their party’s historic collapse.

President Trump is already a historically unpopular president. This creates a great opportunity for the Democrats to come back from the 2016 loss and build an effective and formidable movement over the next four years. But if the “resistance” approaches Trump in the same way that Clinton did during the election, he may not need Russian interference next time around.