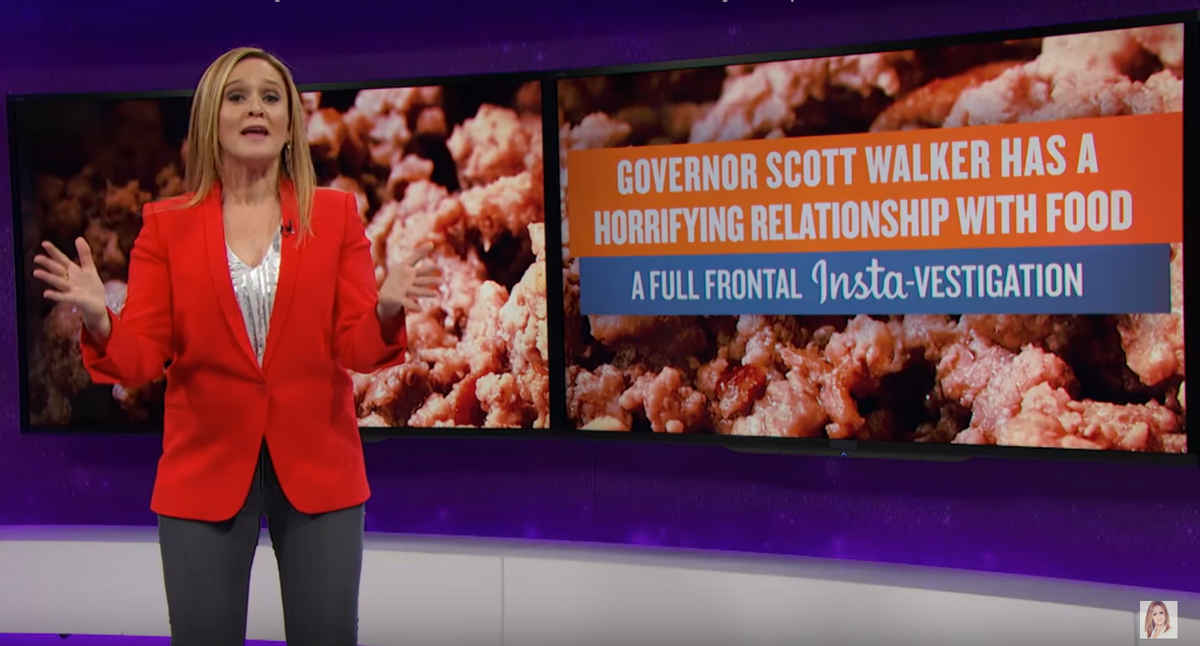 Samantha Bee is not a fan of Wisconsin politicians. That became evident when her TBS show "Full Frontal with Samantha Bee" explored Governor Scott Walker's bizarre obsession with food coupled with his complete aversion to food stamps.

Besides a failed bid for the Republican presidential nomination, and his never-ending crusade against unions, Walker is known for his patented ham-and-cheese sandwich lunch. Bee played a clip from a CNBC interview in which the Wisconsin governor explains his daily lunch regimen.

"To me, ham and cheese is something I have had for, boy, about 25 years. Two ham and cheese sandwiches most days, packed in a brown bag," Walker said. "I'm just a normal guy."

For Bee, this was anything but normal.

"Unless you are a koala bear, eating the same thing every day for a quarter century isn't normal," she fairly pointed out. "That is 19,000 ham sandwiches, you have eaten more pig than Kermit the Frog."

Instead of being embarrassed of this, Walker proudly posts pictures of his brown-bag lunches on Instagram. But that's not all.

"Walker's Insta-ham is just the tip of the iceberg — the Titanic kind of iceberg not the vegetable that Scott Walker carefully picks off his hoagie before gulping it like an anaconda while three guys stand around waiting to Heimlich him," Bee said.

Walker is a foodie of sorts, but of fried food and anything you'd find at the state fair. Bee showed a video of Walker on local TV gleefully recounting the food he ate at the Wisconsin state fair.

"The guy loves state fairs, eats like a small child, is stuck in the Reagan era," Bee said. "Oh my god, did a young Scott Walker go to the state fair and wish to be big on a Zoltar machine, then realized that being an adult sucks so now he's trying to eat himself to death?"

Bee then contrasted Walker's diet to the poor people in Wisconsin on food stamps. Walker wants parents in the state's food-stamp program to be required to work 80 hours a month in order to receive the benefits for their family. He has also proposed mandatory drug tests for food-stamp recipients.

"Governor Walker would prefer public assistance to be an obstacle course," Bee said. "Weed is a lot less hazardous to your health than turning your body into the Midwest's biggest hog rendering plant."