Even in their supposed moment of triumph, right-wingers can't shake their dark obsession with Barack Obama 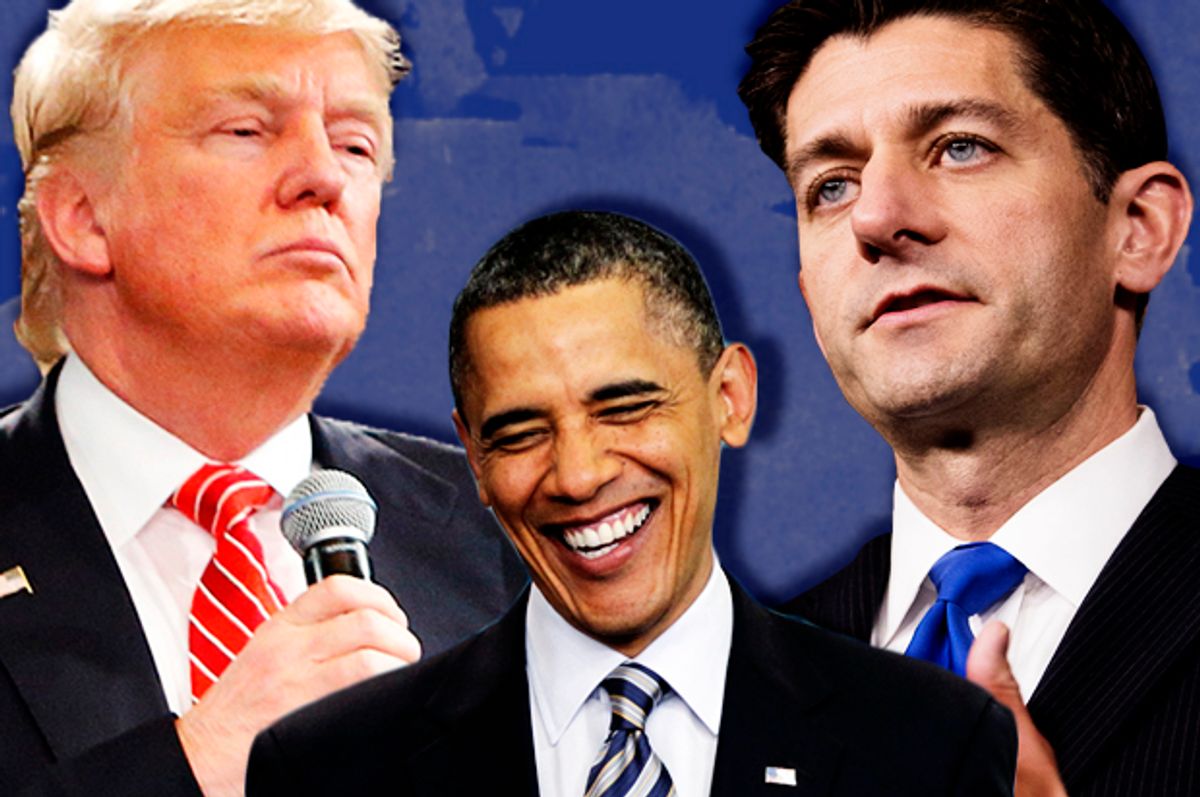 Depending on what day it was during Barack Obama's presidency, Republicans would tell you that Obama was either an incompetent weakling who never accomplished anything or a diabolical, power-mad dictator who used the instruments of government to harass and persecute conservatives. Either way, one would think the right would be happy to have the terrible boy king out of power and out of their lives.

Alas, no. Conservatives cannot seem to let go of some of their old beefs with Obama. Combined with their usual paranoia about liberals, this has led to numerous prominent right-wingers accusing the former president of somehow being “still in control” of the federal government.

Talk-radio host Hugh Hewitt, among others, has accused Obama of leaving behind “sleeper cells” throughout the government, small groups of loyalists determined to hurt the Trump presidency. Indeed, it's common enough for an outgoing administration to make political appointments of folks who are placed in permanent jobs and leave these bureaucrats sprinkled throughout the government. There is even a term for it — “burrowing.” The Bush-Cheney administration, for example, made no secret of its efforts in this area.

When it comes to discussing Obama, however, it is not enough for right-wingers to say that his administration engaged in this practice. For the right, burrowing has been transformed into a malicious conspiracy, with Obama cast as a ruthless puppet master who, frustrated that his efforts to hurt Trump last fall were not enough to keep him from winning the election, is now directing a resistance movement of federal bureaucrats to destroy the sentient racist carrot’s presidency from the inside.

Trump got most of the attention on this issue with his recent tweets accusing Obama of having wiretapped the phones in Trump Tower last fall during the presidential campaign. This was an outgrowth of a conspiracy theory rattling around right-wing media, signal boosted by Breitbart and talk-radio host Mark Levin. And if this lunacy was limited to the legions of Levin and Breitbart fans, it would be a little less worrisome.

As Trump’s tweets show, the right has a willing believer putting the credibility of the presidency on the line so he can engage in a petty feud with his predecessor, which provides more grist for conservative paranoia. But the mainstream media is complicit in its own way in feeding this beast. Hewitt is a regular contributor to MSNBC. CNN keeps adding people to its lineup full of Trump surrogates to repeat and defend the president’s accusations.

In one egregious example, on Thursday CNN commentator and conservative columnist Matt Lewis accused Obama of “running a sort of shadow campaign” against Trump through “leaks from career bureaucrats” and the work of the former president’s surrogates like his onetime senior adviser Valerie Jarrett and former Attorney General Eric Holder. There are not too many names from the Obama era that will get conservatives squealing paranoid conspiracy theories faster than those of Jarrett and Holder. Lewis, a longtime writer for the Daily Caller, likely knows this. But like so many other conservatives, even allegedly reasonable ones, he couldn’t help himself.

This kind of talk is dangerous because it keeps alive conservative revenge fantasies. After all, if Obama is still trying to take down Trump, why wouldn’t Trump and his team hit back? Michelle Malkin essentially said as much in a talk with Sean Hannity on Fox on Wednesday night. Attorney General Jeff Sessions assured Hewitt, during an appearance on his radio show on Thursday, that he is considering appointing a special counsel to investigate the alleged scandals of Obama’s Justice Department, including its handling of probes of the supposed IRS targeting of right-wing political groups and Hillary Clinton’s use of a private email server. (Conservatives can’t quit Clinton either, but that’s another story.)

There might have been a time, decades ago, when it could be argued that conservatism was a political philosophy grounded in logic and argument, when its adherents advocated policies based on its teachings. Now, though, conservatism is a state of mind manifesting as a never-ending series of grievances and blame shifting.

Donald Trump has experienced setback after setback in his first weeks as president? This cannot be so because he is a lifelong BS artist and incompetent boob who suckered conservatives into voting for him. It must instead be the result of the devilry of Barack Obama, pulling the strings of his minions who are still in the federal government in an effort to sabotage Trump.

Conservatism cannot function without an enemy. Since the GOP has unified control of the federal government, its water carriers have to scrape one up.

If conservatives have some evidence that Barack Obama is the shadowy leader of a resistance movement, the Kuato of Washington, taking active steps to undermine Trump’s presidency, they should reveal it. Otherwise, they are just making themselves look paranoid and ridiculous. Not that that has ever been a barrier to right-wing fame.