Once more, with feeling: "Buffy the Vampire Slayer" turns 20, but her ability to resonate is timeless

Two decades after her show premiered, Buffy Summers still reminds us how to fall down, get back up and keep going 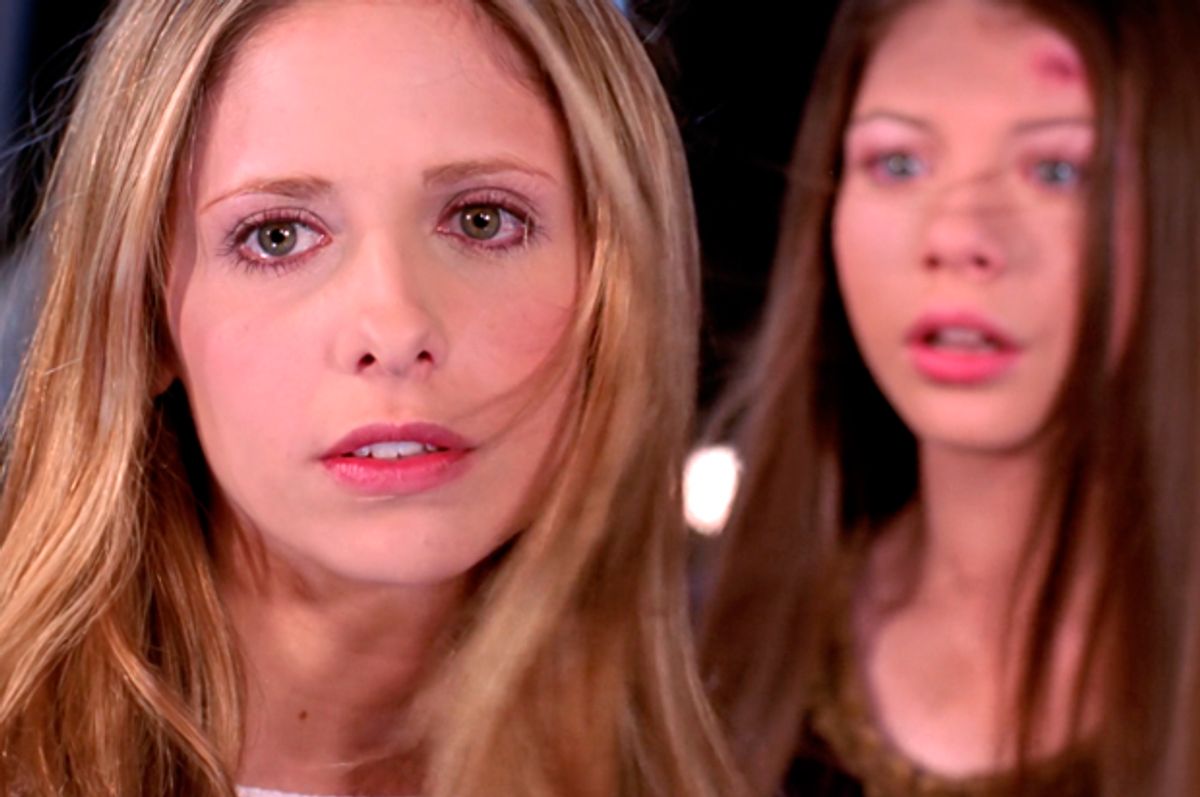 Nearly 14 years have passed since the finale of “Buffy the Vampire Slayer” aired, and during that span of time I’ve watched that episode, “Chosen,” at least once a season. Whether it gets a repeat viewing depends on the kind of year I’m having.

The lowest points in my life call for a revisiting of the entire sixth season – that chapter in which Buffy (Sarah Michelle Gellar) is ripped out of Heaven and returns to her hellish earthly existence in Sunnydale, California. Her best friend Willow (Alyson Hannigan) is an addict, her father figure Giles (Anthony Stewart Head) has left the nest, and her buddy Xander (Nicholas Brendon) is mired in an existential malaise.

The sixth season wasn’t terribly popular among the “Buffy” faithful when it aired, but a number of us have come to appreciate it in its afterlife. Spend enough time in this world and you realize that everybody experiences their own “Buffy” season six, a thunderstorm of tribulation that either knocks you into the Hellmouth or inspires you to dig in your heels and keep on punching long after your strength gives out.

Maybe that’s why season six’s musical romp, “Once More, with Feeling,” is beloved by the “Buffy” faithful. Far from the finest hour of “Buffy,” it’s not even a stupendous TV musical episode. Instead, it speaks to the forlorn ache binding their lives with a catchy songbook perfect for theatrical sing-a-longs.

Just as often a particular day at the office might inspire a return to a specific episode, or a moment in an episode. Many frustrating workdays ended with a viewing of the sword duel between Buffy and with her soulless former lover Angel (David Boreanaz) in the second season finale, “Becoming (Part 2)”; my husband’s balm of choice is “The Zeppo” from Season 3. Tonally speaking, the episodes could not be more different, though the message at the core of them is the same: When you’re backed into a corner, what are you made of?

Sword raised, he slashes down for the coup de grace…and to answer his question, she catches the blade between her palms and says, “Me.”

Few television series earn a place in the Comfort Viewing Hall of Fame. But for millions of viewers who came of age while “Buffy the Vampire Slayer” aired on The WB and later, on UPN, the influential series wins that designation because of moments like this. Fans like me can recite the dialogue word for word, remember the serene look on Sarah Michelle Gellar’s face as her heroine closes her eyes and, trusting her instincts, catches that deadly steel. “Buffy” is power fantasy, but it speaks to something real about the ceaseless battle of living.

Friday March 10th marks the 20th anniversary of the series premiere of “Buffy the Vampire Slayer,” which is why you may have noticed a surge of stories about it within the past few days (You can even wake up to celebrate the anniversary with cable’s Pop, which is airing the two-part premiere at 9 a.m. ET/PT — although the entire series is available to stream at your leisure on Hulu and Netflix). But anyone who regularly read television coverage and criticism over the past two decades knows the show has never gone away.

Part of that is generational; professional TV viewers like yours truly were beginning to sort through the intricacies of dramas and comedies that were airing in 1997. There was an element of geeky cool in pledging allegiance to “Buffy” when it was on TV.

The title itself was a dare, and the premise of a perky blonde California girl named Buffy Summers being “the one girl in all the world, a chosen one” with incredible strength and natural-born skill to slay demons and vampires, seemed ludicrous. Girls like Buffy were monster fodder in horror films, helpless damsels made to scream, run like clumsy foals, trip and sustain multiple stab wounds for our entertainment.

That this was the point shouldn’t require any explanation by now. “Buffy” creator Joss Whedon has long since established his fondness for upending genre tropes and compassionately reshaping heroes, even those lacking in superpowers, to fit into the real world. The only thing that stopped a young female from being a vampire slayer is that no one had created such a character.

The ratings “Buffy the Vampire Slayer” earned during its run belie its status as a hit, in the typical sense. In its most popular season, the drama’s third, averaged 5.3 million viewers a week. By today’s standards that’s a fairly healthy audience, but in the 1998-1999 season that placed it at #133 in Nielsen’s broadcast rankings. (That still made it the second most popular series on The WB that season.)

Even so, “Buffy” remains in the marrow for so many of us because throughout the show’s seven season run, she reflected the universal struggle to figure out how to be human in an increasingly unfeeling world. Take away the evil creatures, the mighty witch of a best friend and other magical wrapping and “Buffy” basically provides the viewer with a battle plan for how keep going, even after your heart has been shattered in ways one could not have predicted.

“Buffy” began in high school, making her war with vampires, demons and a truly horrendous principal a metaphor for the hell of adolescence. But her graduation into the adulthood marked the show’s evolution beyond a simple guilty pleasure for those of us who had aged out of The WB’s target age demographic. Overnight she was thrust into the role of caregiver and war leader. She had a brutal entry into the realm of sexuality, but learned how to love nevertheless — foolishly, yes, and without apology. (In one unforgettable scene, she hate-screws her one-time nemesis Spike (James Marsters), and the shock waves they create brings an entire building crashing down around them.)

Betrayal, disillusionment, crippling despair, powerlessness, even parental loss – Joyce Summers (Kristine Sutherland) was as legendary a mother as her daughter is a Slayer — Buffy Summers contended with all of that with varying degrees of success. In one memorable episode she discovered that her superhuman strength and mandate to protect humans from harm did nothing to help her refinance the mortgage on her mother’s house.

Yet she persisted, matured into her power all the way. Even when Buffy had nothing, she was still the Slayer, a designation she once saw as a burden but eventually embraced as a calling. Her strength was to be respected and, eventually, shared with others chosen to bear it.

And when the world hovered on the brink of Armageddon – which happens a lot in a town built around a hole to Hell – Buffy could be surrounded by allies but inevitably had to stand alone.

Twenty years after “Buffy” its players have moved on even if many of its fans can’t quite let it go. Whedon directed “The Avengers” in 2012 and its 2015 sequel “Avengers: Age of Ultron.” Hannigan, whose Willow evolved from a mousy nerd into the world’s most powerful witch (and became a lesbian icon in the process), went on to play Lily Aldrin for nine seasons in the hit CBS sitcom “How I Met Your Mother.”

Head may be one of the hardest working actors in the U.K., turning up in a number of guest starring roles, including on Syfy’s short-lived “Dominion.” And Boreanaz and Marsters went on to co-star in the popular "Buffy" spinoff "Angel"; like Hannigan, Boreanaz spent a longer time in the role of FBI Special Agent Seeley Booth on Fox's "Bones," which airs its series finale later this spring.

But where are today’s equivalents to “Buffy the Vampire Slayer”? While it’s probably a coincidence that one of the series to which millennials flocked, “The Vampire Diaries,” airs its series finale on the same day as the Slayer’s 20th anniversary, the contrast between the series is notable. “Vampire Diaries” began as a show about a teenage girl who fell in love with a handsome young vampire, who fought with his brother, another hot vampire, for her affections. It was television’s answer to “Twilight” mania, just a story of a girl who loves an undead boy dedicating to saving her.

As the object of desire for two lovelorn super humans, "The Vampire Diaries" heroine Elena occupied a position many of her fans would kill for. Women looking for signs of a Slayer, though, might turn to AMC’s “Into the Badlands,” which returns next Sunday and features a skilled female martial artist named The Widow who runs her own fiefdom.

In fact, female fighters are plentiful on TV these days; they can be soldiers (ABC’s “Marvel’s Agents of S.H.I.E.L.D.,” co-created by Whedon, who has an executive producer credit) or superheroes (The CW’s “Supergirl,” Netflix’s “Marvel’s Jessica Jones”). They might be vigilantes with a vendetta, such as the heroic duo at the center of MTV’s “Sweet/Vicious.” Syfy even has a bonafide vampire huntress with its series “Van Helsing.”

But many of these women are duty bound, or reluctant, or spiritually cold – or not of this Earth.

Buffy Summers, in comparison, can’t be rid of this world, and it doesn’t want to be rid of her. Since “Buffy the Vampire Slayer” debuted, it has inspired comic book series, academic papers and college-level classes, not to mention endless hopes for a TV revival or even a realization of the long-promised spinoff for Head’s character Giles, “Ripper.”

It could happen. After all, we’re talking about a woman who died twice and kept coming back to fight. As many times as Buffy Summers got knocked down, she marshaled enough strength to get back up. She saved the world, a lot. And she continues to save so many of us in little ways, one episode re-watch at a time.