What is Sir Ben Kingsley doing in "The Ottoman Lieutenant"? 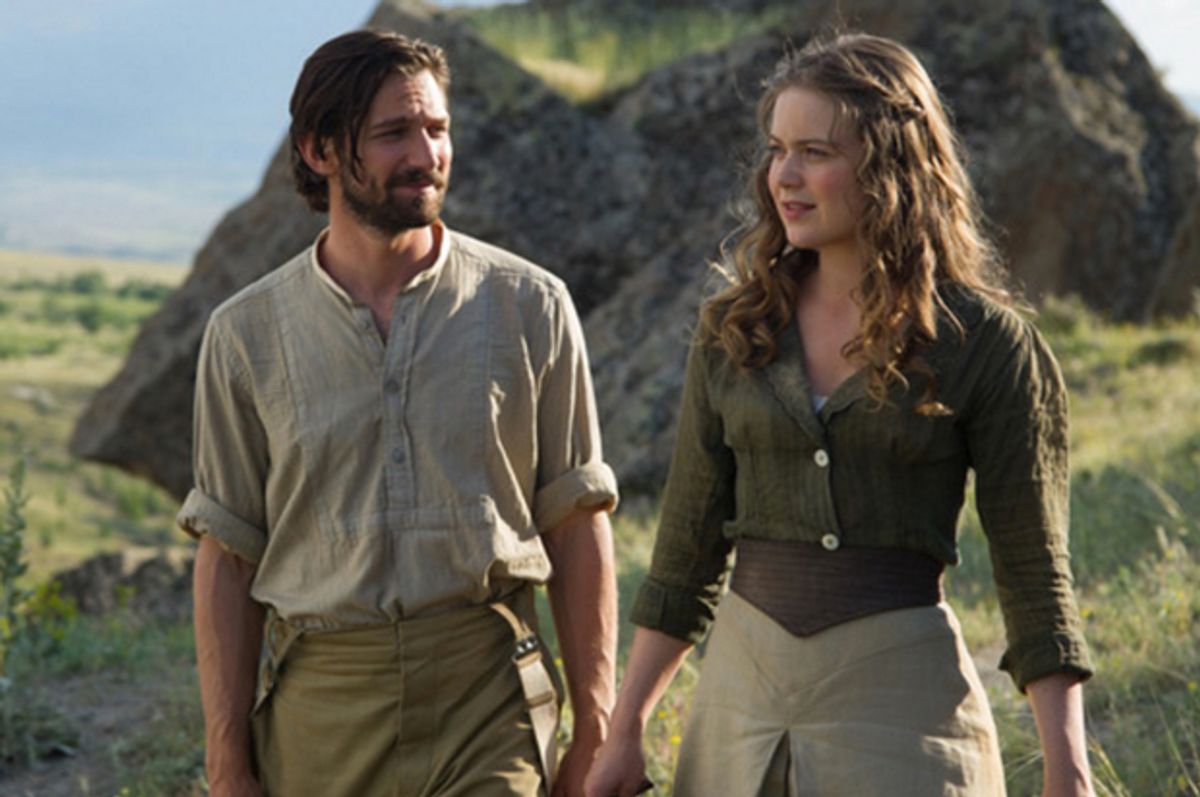 Michiel Huisman and Hera Hilmar in "The Ottoman Lieutenant" (Paladin)
--

“The Ottoman Lieutenant” is a historical war melodrama with feminist themes, a medical setting and a tragic romantic love triangle. It is an ambitious epic and a big, syrupy serving of Europudding — that term is used to describe internationally made and cast productions, such as this one, which is set largely in Turkey and stars Dutch, British and American actors.

The title character is Ismail Veli (Michiel Huisman), a dreamy Muslim soldier, but the story is told from the point of view of Lillie (Hera Hilmar), a plucky young Christian woman. Lillie says in her opening voiceover, “I thought I’d change the world, but the world changed me.” Her didacticism, which extends to additional voiceovers that describe the history and impact of war in Turkey, is very useful for viewers who aren’t knowledgeable in young coming of age tropes or World War I stratagems.

The film opens in 1914 Philadelphia, where Lillie is a nurse. As she tends to a wounded black man, Lillie is reprimanded for treating someone who should be turned away because of his skin color in a hospital where the staff and patients are white. The indomitable Lillie is disgusted by such racism and soon becomes inspired by the work of Dr. Jude Gresham (Josh Hartnett), who talks about the unspeakable violence in eastern Anatolia.

Disappointing her parents, by not getting married and raising a family, like most women of her age and status, Lillie instead cashes in her inheritance and boards a steamship (with her late brother’s mint-condition truck and medical supplies in tow) bound for Turkey. She immediately meets the Ottoman lieutenant, who saves her from a shoeshine scam. He escorts her to the local mosque, which is resplendent with beautiful tiles. Alas, this scene might prompt viewers to think about renovating their bathrooms rather than contemplating “being inside God’s thoughts” as the characters do.

“The Ottoman Lieutenant” is deliberately superficial, a handsomely mounted bit of hokum featuring beautiful people in an exotic setting. Yes, there is war and death and romance, but this film is meant to be a modern-day throwback to old-fashioned movies, not some highbrow art-house masterpiece.

Case in point: En route to the American mission, Lillie and Ismail have a moment where she literally falls for him on a train car (after giving him a piece of her mind). It’s such a corny, contrived episode, that one can only applaud its absolute lack of subtlety. And if the point escapes any viewer, the music swelling on the soundtrack will be sure to cue the right emotions.

And speaking of emotions, “The Ottoman Lieutenant” features a mildly exciting action sequence with bandits chasing Ismail and Lillie. Lillie loses control of her brother’s truck on the edge of a high cliff, but luckily Ismail is riding alongside her on horseback and manages to save her at the last second! Apologies for the spoiler, but given that this happens in the early part of the film, it’s really not a surprise they survive.

With the truck and medical supplies lost, Lillie arrives at the hospital where she reunites with Dr. Gresham, and meets Dr. Garrett Woodruff (Ben Kingsley), who as his name suggests, is ornery and blunt. Dr. Woodruff tells Lillie to “go home" and "this is no place for a woman,” but the feisty young heroine will not to have her spirit broken!

While she has a rocky start, misdiagnosing a child with typhus, Lillie proves herself adept at handling a patient who is suffering from fluid pressing against his heart. When the film shows Dr. Gresham operating on the man, and the fluid spurting out of his chest, viewers will be grateful “The Ottoman Lieutenant” was not shot in 3-D. They may also wonder why the doctor and his nurse are not seen washing their hands before surgery.

But never mind. Dr. Gresham wears a rather natty vest, and he and Lillie inexplicably perform a ripping duet together on the piano. Romance appears to be flowering. So, of course, Ismail must turn up to fight with the doc. Later when the two rivals for Lillie’s affections do get into an actual fistfight, viewers can hear the unmistakable sound of sandbags dropping to the floor, overdubbed to provide the sound effects for their punches.

The fight between the romantic rivals is best summed up in the film’s most on-the-nose line, when Dr. Gresham screams at Ismail, “Men like you spill the blood that men like me are expected to clean up!” The doc does have a point. A previous, unintentionally funny scene has Ismail happening upon two dogs chewing on a dismembered human arm. War is hell, lest anyone forget.

But back to the romance: In a sequence that only certain, discerning viewers (anyone who enjoys Harlequin romance novels) will savor, Lillie and Ismail act on their forbidden attraction. Remember: He’s a Muslim; she’s a Christian. They are both beautiful. They race horses across a lush green field. They barely seem to work up a sweat, even after they talk about big ideas like freedom and taking the roles they are given in life. When they share a swoon-inducing kiss on a boat, however, romantics’ hearts will be a-racing.

Later the couple consummate their passion with some soft-focus (but sadly, not soft-core) lovemaking. Dr. Gresham becomes exceedingly jealous. Seeing Lillie he shouts, “My God! I can smell him!” It is easily the film’s biggest howler. What is more, it borders on that ethnocentrism that Lillie so nakedly detests.

Moving from passion to action, Ismail takes on a suicide mission in the film’s last and most thrilling act. With the help of a teenage boy, he infiltrates an enemy fortress and sets off an explosion that looks really impressive. What happens after this scene sets the film’s tragic finale in motion. It will effortlessly jerk tears from viewers who are as likely to cry during a Lifetime movie of the week.

Yes, “The Ottoman Lieutenant” is all over the map in terms of tone, genre and acting styles. Michiel Huisman is dashing as Ismail, but his accent goes in and out, and his performance consists of him looking good, especially when he goes after a sniper in a tense action scene.

In contrast, Josh Hartnett seems to have distilled his performance down to putting his glasses on and taking then off, which he does with noticeable aplomb. Dr. Gresham is an underdeveloped character, even if a subplot about his gunrunning is meant to make him complex. (It doesn’t.)

But Dr. Gresham is far more fleshed out than Dr. Woodruff, who is so troubled that he takes ether to go to sleep, loses his grip with a scalpel signaling trauma, and gives a speech to Lillie about punishing himself that is meant to be moving. Sir Ben Kingsley seems to be sleepwalking through the role, and most viewers will be embarrassed to see the Oscar winner slumming here.

But the film’s most truly awful performance belongs to Hera Hilmar, who speaks her lines in such a flat, affectless manner that she fails to engender any emotion, much less convince us of her conviction. It is a shame that the film’s heroine is so lifeless because Lillie is meant to be inspiring. Hilmar never quite excites.

“The Ottoman Lieutenant” may be a real mess, but for viewers in the right frame of mind, this is one ripe piece of sweet cheese.