Does the Trump administration want a holy war against Islam? It's a terrifying but reasonable guess

Steve Bannon's apocalyptic views are very close to those of ISIS, and Trump is surrounded by religious zealots 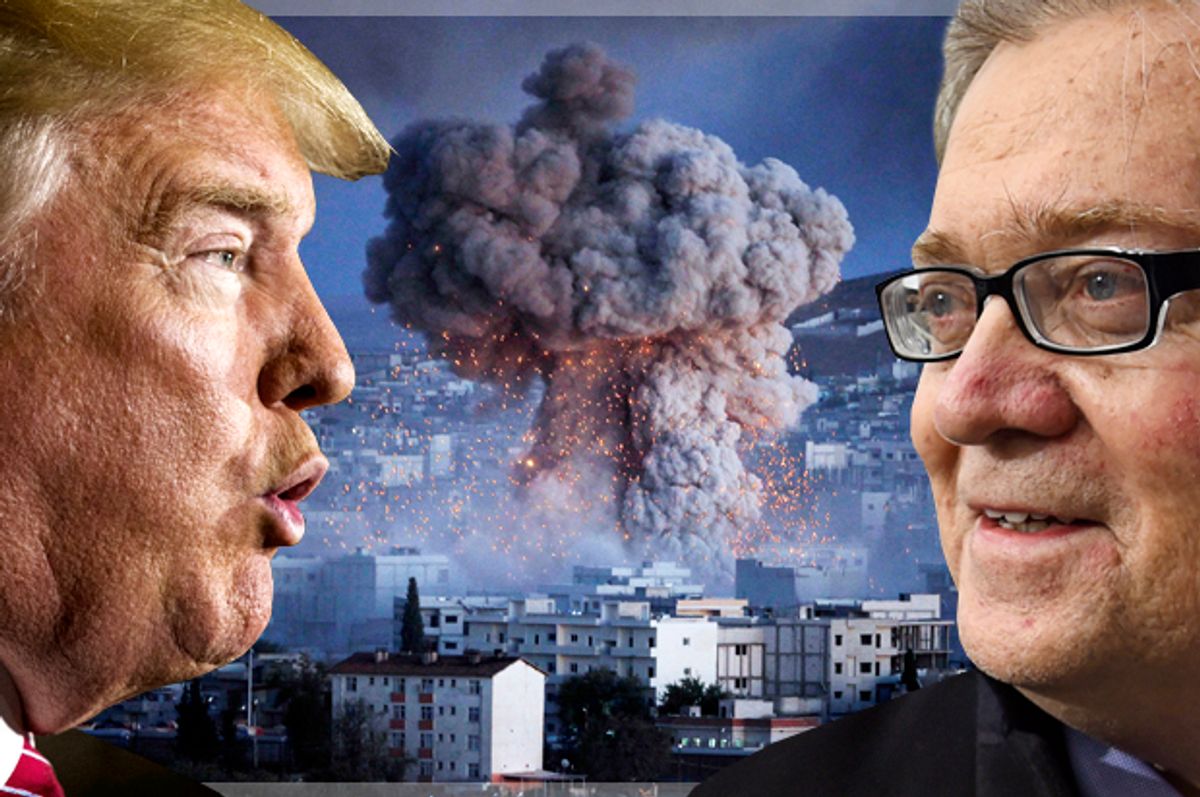 SANLIURFA, TURKEY - OCTOBER 20: (TURKEY OUT) An explosion rocks Syrian city of Kobani during a reported suicide car bomb attack by the militants of Islamic State (ISIS) group on a People's Protection Unit (YPG) position in the city center of Kobani, as seen from the outskirts of Suruc, on the Turkey-Syria border, October 20, 2014 in Sanliurfa province, Turkey. According to Foreign Minister Mevlut Cavusoglu, Turkey will reportedly allow Iraqi Kurdish fighters to cross the Syrian border to fight Islamic State (IS) militants in the Syrian city of Kobani while the United States has sent planes to drop weapons, ammunition and medical supplies to Syrian Kurdish fighters around Kobani. (Photo by Gokhan Sahin/Getty Images) (Reuters/Lucas Jackson/Getty/Saul Loeb/Gokhan Sahin/Salon)
--

After multiple delays, President Donald Trump finally signed a new executive order last Monday that reinstated a travel ban on citizens from six of the seven countries (Iran, Sudan, Somalia, Libya, Syria and Yemen) included in the previous order, which had been suspended after being struck down by the judiciary last month. The new ban arrived about a week after a Department of Homeland Security document that completely undermined the Trump administration’s stated rationale for the ban was leaked to the press.

The DHS report, which noted that citizens from the countries included in the first ban are “rarely implicated in U.S.-based terrorism,” and that an individual’s citizenship is an “unreliable indicator of terrorist threat to the United States,” was first published by the Associated Press as a draft document in late February. Less than a week later MSNBC’s Rachel Maddow obtained what appeared to be a final version, dated March 1.

The final analysis, coordinated with various other departments, determined that “most foreign-born, U.S-based violent extremists [are] likely radicalized several years after their entry to the United States,” and that different “experiences and grievances,” including “perceived injustices against Muslims in the homeland and abroad because of U.S. policies, feelings of anger and isolation, and witnessing violence as a child,” are the primary causes.

While experts have long contended that Islamophobic rhetoric and policies are more likely to fuel radicalization than to “eradicate” radical Islamic terrorism — the president’s purported goal — some were hopeful that Trump would rethink his ill-advised ban after being educated by his own government.

“I think the Muslim ban is dead,” remarked Maddow in her televised report.

Unfortunately, like most things that are based on facts, the report apparently had no effect on Trump, who has been firmly committed to some kind of ban since calling for a “total and complete shutdown of Muslims entering the United States” in late 2015.

While Trump’s unwillingness to abandon this reckless policy is probably more about his massive ego and inability to admit when he is wrong than anything else, one has to wonder whether there are ulterior motives involved. When the original ban was first unveiled, experts widely denounced it as “counterproductive” and “stupid” — and in Trump’s case, stupidity is probably the right word.

But the president’s advisers are far from stupid, and the implications of the ban can hardly be lost on its chief architect, Steve Bannon. Is it too far-fetched to surmise that Bannon — who has previously said that the “Judeo-Christian West” is at war with “expansionist Islamic ideology,” and that we’re on the verge of a “global war” against “Islamic fascism” — is actually trying to alienate Muslims and fuel radicalization?

Like many right-wing extremists in the West, Bannon’s worldview mirrors that of his archenemies in ISIS and al-Qaida, who also proclaim that the Islamic world and the Christian West cannot coexist peacefully, and that we are on the brink of an apocalyptic holy war. While the Christian fundamentalist and the radical Islamist are, in their minds, sworn enemies in this “clash of civilizations,” they are both reactionary ideologues who feed off each other.

This process was recently demonstrated when Bannon and his bulbous nose graced the cover of the al-Qaida-linked newspaper Al-Masra, which published an article using the White House chief strategist’s words as evidence that Islam and Christianity are irreconcilable, and that the crusader West is preparing to wage an existential war against Islam.

In his prescient 2007 book, “American Fascists: The Christian Right and the War on America,” Chris Hedges observed the many other parallels between Christian fundamentalists and Islamic extremists:

The Christian Right and radical Islamists … share the same obsessions. They do not tolerate other forms of belief or disbelief. They are at war with artistic and cultural expression. They seek to silence the media. They call for the subjugation of women. They promote severe sexual repression, and they seek to express themselves through violence.

Christian theocrats who are “arrayed against American democracy,” observed Hedges, “are waiting for a moment to strike, a national crisis that will allow them to shred the Constitution in the name of national security and strength.”

Though some may view this as paranoid, it is not unreasonable to suspect that Bannon and other extremists inside the Trump administration are waiting — even hoping — for another big terrorist attack that will give further credence to their clash of civilizations narrative and allow the Trump administration to crack down still further on civil liberties and democracy.

The fact that the Muslim ban will likely fuel homegrown radicalization and exacerbate the risk of a Islamic terrorism, then, is a strength, not a weakness.

While President Trump himself is hardly a Christian fundamentalist (it is unclear whether he even believes in God), he is both an ignoramus and an opportunist, and his White House has been thoroughly infiltrated by Christian zealots with millenarian visions of the coming apocalypse.

Trump’s CIA director Mike Pompeo believes, like Bannon, that we are in a religious war with Islam, and has said that politics is a “never-ending struggle … until the rapture.” Betsy DeVos, the Secretary of Education, is a longtime supporter of privatizing schools, and believes that education should “advance God's kingdom.” The secretary of Housing and Urban Development, Ben Carson, has compared secularism to schizophrenia. Attorney General Jeff Sessions has opined that the separation of church and state is unconstitutional, and that non-believers are unfit to govern. And of course Vice President Mike Pence is a “Christian supremacist” who has “been a reliable stalwart throughout his public life in the cause of Christian jihad,” as the Intercept’s Jeremy Scahill put it last year.

Since unveiling the new travel ban, the Trump administration has insisted that the president’s latest executive order is not a “Muslim ban,” and that it is necessary to ensure national security. But the facts tell us otherwise — and with an administration full of Christian zealots, one must consider whether the real end goal here is a global holy war.