How the DudeBros ruined everything: A totally clear-headed guide to political reality

Irritating left-wing guys have ruined democracy, apparently. Which might suggest it wasn't doing so great before 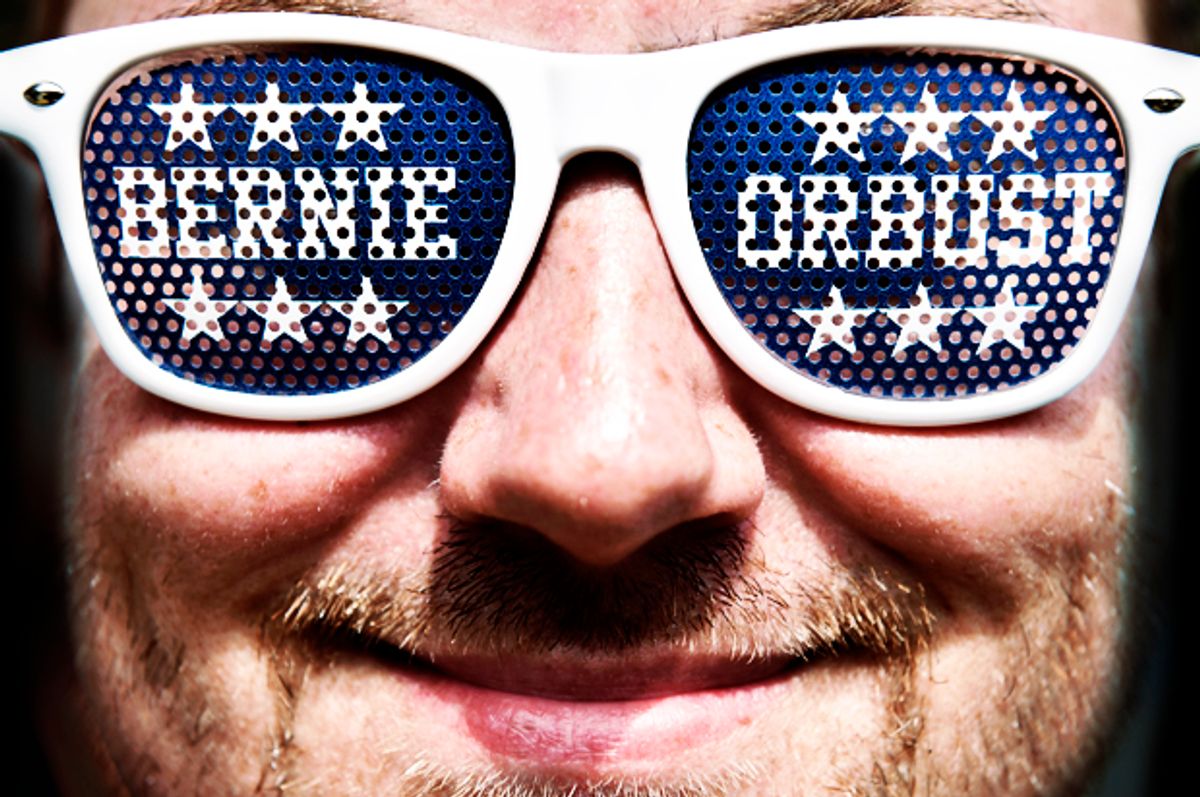 We are without doubt in a moment of profound political crisis in the United States of America. And I know who to blame. No, not that guy, or the 62 million disgruntled, deluded and semi-downtrodden people who voted for him. Not the opposition party that seems to have lost all sense of mission and vision, and that now understands democracy as an entirely transactional affair, buoyed up sporadically with empty inspirational rhetoric. Not the capital-owning oligarchy whose wealth and power have grown immeasurably over the last 30 or 40 years. Not the international elite ideology sometimes called the “Washington consensus,” which held that there was only one way forward after the end of the Cold War, and that involved lower taxes, cheaper consumer goods, fewer social services and the free flow of jobs and money.

Nope, it wasn’t any of that stuff that got us where we are now. Since I am a mature and level-headed grownup who gets paid to sit at a desk and write things, I understand these things. So does James Wolcott of Vanity Fair, who — in the longest and most erudite hot take of recent journalistic history — blames the current disordered state of the anti-Trump opposition on the “dude-bros and ‘purity progressives’” of the “alt-left,” which he describes as a “mirror image distortion” of the neofascist alt-right. (I think that "mirror image distortion" translates, in English, to something that is not like that other thing at all.) These people, whoever and wherever they are, “exert a powerful reality-distortion field online and foster factionalism on the lib-left.”

Oh no -- factionalism on the left! What a new and disturbing phenomenon. Anyway, who am I to quarrel with one of the greatest cultural critics of the dead-tree era: The great historical villains of this era are none of the aforementioned possibilities, but rather the DudeBros. I have never completely grasped the term, but I take it Wolcott means the young white men with liberal-arts degrees and confusing haircuts, whose wardrobes seem to combine all the worst tendencies of the last four decades?

If so, I see those guys on the street in Brooklyn all the time, and I am acutely aware of their crimes. Their trousers are several sizes too small, which makes me uncomfortable. As someone who was alive during the 1970s, I can’t help feeling that their facial hair muddles age-old semiotic distinctions between gay and straight. This is not supportable.

As those of us who understand how the world actually works realize, mainstream liberalism as embodied in the Democratic Party cannot possibly be to blame for its massive political failures. It has demographics on its side! Which is sure to lead, in some golden era that lies just beyond the horizon, to the permanent hegemony of rational technocratic decency.

Furthermore, liberalism is bound to prevail ultimately because it seeks pragmatic compromise and avoids ideological confrontation, which -- according to the tenets of liberalism -- is how you win over the middle-most slice of the middle ground and ensure endless electoral victory and social progress. How do we know that will work, in the face of repeated electoral defeat, rapidly reversing social progress and the total disappearance of the so-called middle ground? Well, it’s complicated: Consultants and pie charts were involved. You wouldn’t really understand.

Since liberals are by definition sensible people who make the right decisions about everything, each new and terrible setback must be blamed on some marginal but troublesome phenomenon: talk radio, Ralph Nader, crackpots in Revolutionary War costumes, the Koch brothers and, in the illuminating case of the disastrous 2014 midterms, the alarming fact that voters who supposedly supported the liberal agenda simply couldn’t be bothered to show up.

Now, a cynic might say that “We’re the party that most people actually support; they’re just too stupid and lazy to vote for us” is the kind of thing a doomed political entity might say. Or, more to the point, that even if such an argument is partly true, it suggests a widespread loss of faith in the electoral process and the workings of democracy that mainstream liberalism is ill-suited to address. But such a cynic lacks the blithe self-confidence of the liberal establishment, which believes itself driven by reason while steadfastly resisting all empirical evidence it doesn’t like.

I’m sorry; I’m losing the thread here a little bit. To the liberal hive-mind, the inordinately painful defeat of 2016, in which Hillary Clinton got millions more votes than that other guy but lost anyway, presents a difficult conundrum. It appeared to be an impossible outcome in advance, and remains so in retrospect. It couldn’t have happened, and therefore in some sense did not happen. It can only be explained in terms of bizarre extrinsic factors, and in the case of this fluke election many of those factors are at least somewhat plausible: It was the Electoral College, it was the Russians, it was the FBI. It was white people, stubbornly putting the chimera of racial solidarity ahead of their own economic interests, which is a long-running theme in American politics.

But another running theme in Democratic Party apologetics informs all that, which is the ingrained desire to blame the left-wing resistance for anything that goes wrong — and to insist that it isn’t actually the left at all but sort of, kind of, the right. Hence Wolcott’s argument that the DudeBros and "purity progressives" of the “alt-left” are in some undisclosed manner closely related to the rebranded white supremacists of the alt-right. Or maybe it's just that he doesn't like either of them.

To return to our central premise: The DudeBros ruined everything. Their workings are malicious, and marvelous. They are simultaneously clueless, puritanical and all-powerful. In between Ultimate Frisbee tournaments and Vampire Weekend marathons, they elected Donald Trump, wiped out the Democratic Party between the coasts, rioted against Milo Yiannopoulos in Berkeley and/or defected to the alt-right en masse. They develop apps whose functions remain mysterious, and that most of us don’t know how to use. Unforgivably, they made the Phish reunion possible, and now it will never stop.

Intemperate young men who supported Bernie Sanders over Clinton in the Democratic primaries and behaved like jerks about it on the internet had a much broader reach, apparently, than their modest numbers and tender ages would suggest. They destroyed the popular front of unanimity and solidarity that would have been necessary to defeat Donald Trump. Perhaps they did so through their bad manners and worse footwear, because otherwise I am unclear on the mechanisms involved. They were not symptoms of the fact that the Democratic frontrunner was widely perceived as a scandal-plagued Wall Street tool whose political sell-by date had expired, but causes of that perception.

Without ever letting the Hacky Sack touch the ground, the DudeBro army traveled back in time in their Tardis and terrified the Democratic Party into neutering itself ideologically, spending years running as the Slightly Less Mean Republicans and losing more than 1,000 state legislative seats during the eight years of Barack Obama’s presidency. Perhaps their unsettling appearance in the past, wearing T-shirts for Radiohead albums that didn’t yet exist, caused Obama to demoralize the progressive base by staffing up his Cabinet with financial industry insiders and conducting drone assassinations in numerous foreign countries with which the United States was not at war.

Back in the present of 2016, the “Bernie or Bust” tribe somehow spooked the Clinton campaign into abandoning the Rust Belt states and making what many pundits perceived as a bold play for “moderate Republican women” in the suburbs of Charlotte and Phoenix and Philadelphia and Atlanta. All we are is dust in the wind.

I will drop the satirical mode here — if it hasn’t dropped me already — and make a few straightforward observations. I am not defending the obnoxious behavior of the DudeBros, to whatever extent they exist. I am not disputing that sexism and misogyny played a role in the cruel defeat of Hillary Clinton in the fall election, or that it played a role in the unexpectedly close primary contest between Clinton and Sanders. That strikes me as obvious. Many feminists were understandably surprised that younger women overwhelmingly favored Sanders over Clinton in the Democratic race — and you didn’t have to be a woman or a feminist to be shocked that a majority of white female voters supported Donald Trump over Clinton in the general election. But those things speak to a profound crisis of identity and ideology on the “lib-left” that James Wolcott, et al., are eager to avoid.

I don’t pretend to know whether Sanders or some other “progressive” candidate would have defeated Trump. Those who claim the answer is obvious are doing their cause no favors. We don’t get to roll back history and rerun the experiment, and it’s important to understand the Trump election as the crest of a worldwide wave of right-wing reaction. Trump’s victory was overdetermined, to use social-science jargon; once his bizarre campaign had gathered momentum, conventional politics seemed powerless to stop him. This may be magical thinking of a different kind, but I’m inclined to believe that President Trump had to happen, in order to galvanize the next stage of American history. (I'm not promising that stage will be awesome.)

I’ve spent much of my adult life around the left-wing opposition — that is, around folks on the leftward fringe of the Democratic Party, or outside it — and I know how sanctimonious and contentious they can be. But the combination of narcissism, delusion and entitlement that produces something like Wolcott’s über-troll manifesto — or the tedious circular discussions about whether class-based economics must trump “intersectionality,” or the other way around — reflects the terminal disintegration of the liberal consensus.

When “liberals” become a political grouping morbidly obsessed with their left-wing critics, constantly accusing them of being too idealistic and too intransigent and of being covert agents for the enemy, they have stopped being liberals and become conservatives. Which indeed happened some time ago, when the old “conservatives” became radical fanatics. When “the left” endlessly debates which core issues or constituencies must be sacrificed for political gain, as if economic justice for the poor and the working class could be separated from social justice for women and people of color and the LGBT community and immigrants and people with disabilities, it is no longer functioning as the left.

The tsunami of discord and disruption that overturned political reality and carried Donald Trump into the White House has been a long time coming, and probably represents the only path forward. Those who tell themselves that the old order will soon be restored are kidding themselves, no matter where they stand on the political spectrum. In the long run, the liberal establishment’s attempt to purge or ignore the upsurge of left-wing populism is likely to work just about as well as the conservative establishment’s effort to put down right-wing populism did.

In hindsight this may look like one of those periods Karl Marx described more than 160 years ago, when “all that is solid melts into air, all that is holy is profaned, and man is at last compelled to face with sober senses his real conditions of life, and his relations with his kind.” Or it might look like the period when James Wolcott went into his garage for a can of whup-ass, because the DudeBros won’t get off his lawn.