Did ISIS inadvertently uncover the secret to the "lost" Hanging Gardens of Babylon? 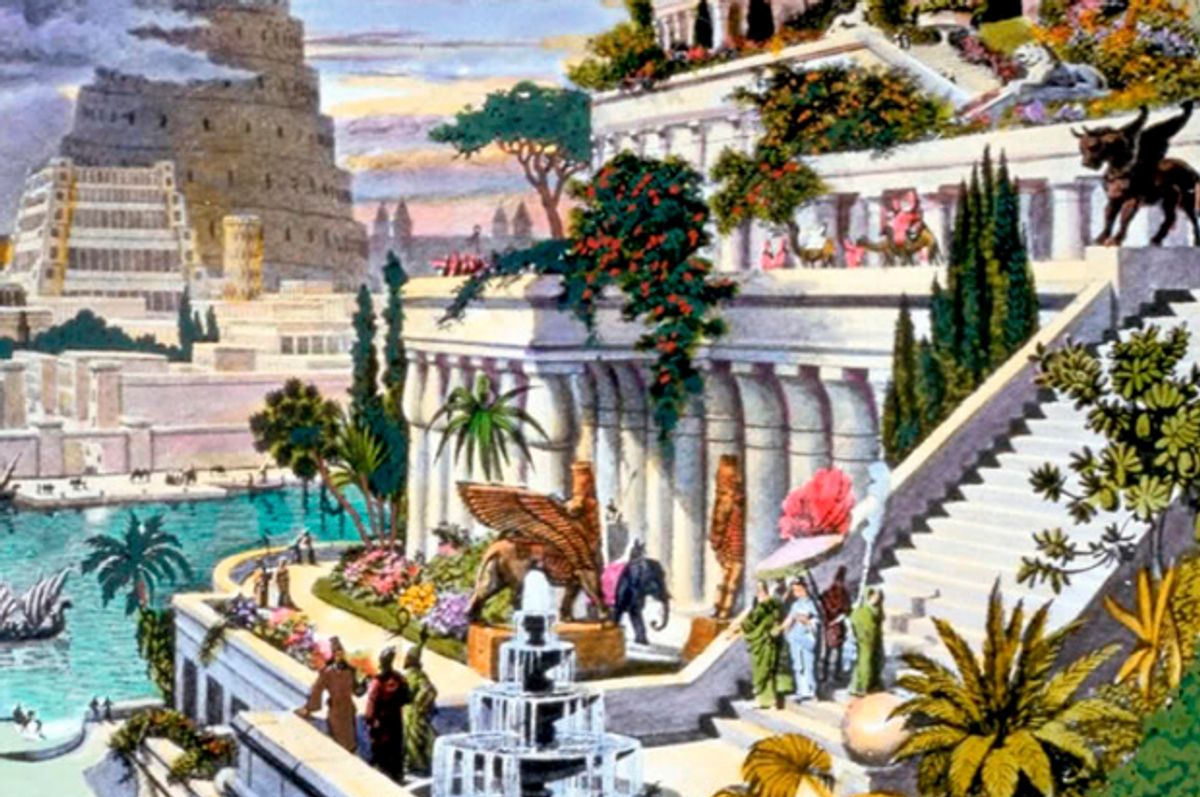 Last week, a group of concerned archaeologists, mapping out the extent of the damage wrought by ISIS when it occupied the Iraqi city of Mosul, announced a shocking discovery. In 2014, the terrorist group had gleefully announced its destruction of the Nebi Yunus shrine, traditionally believed to be the tomb of the Prophet Jonah and a part of the ancient ruins of the city of Nineveh.

In February the Iraqi army drove ISIS from Mosul, giving archaeologists their first chance to inspect the devastation. ISIS’ funding of its activities through the sale of illicit antiquities has been well-documented. Anything ISIS might find, in the course of plowing through ancient sites, would be gathered for sale abroad, while the militants would destroy as much as they could along the way, documenting the harm in order to upset their ideological enemies.

At first there was little concern that Nineveh would yield salable artifacts. It had been carefully excavated by waves of archaeologists since at least 1842. The only chance of finding new treasures would be to search where no one has looked before. And the only place that no one has looked, where archaeologists would not try to look, would be places that can be accessed only by blowing up or bulldozing the already-revealed parts of the ancient city.

To the surprise of the archaeologists, upon examining the reconquered city, they found evidence that when ISIS blew up parts of the Nebi Yunus shrine, the militants unveiled a major discovery: a palace that predated the Tomb of Jonah and had been buried beneath it — unseen for thousands of years.

In terms of exposing history, this is a major find. But ISIS arrived there first and, as archaeologist Layla Salih said, “I can only imagine how much [ISIS] discovered down there before we got here.” On the other hand, optimism was re-injected when she and her team found some items of great interest (and value) that had not been taken. For example, there is an inscribed piece of marble with cuneiform that includes turns of phrase used elsewhere exclusively to describe a specific king, Esarhaddon, who was a ruler of Assyria circa 672 B.C.

This suggests that the newly discovered palace from the 7th century B.C. is one that historians knew about but had thought long lost — one begun by King Sennacherib and completed by his son, Esarhaddon. This palace was so badly damaged during the 612 B.C. sack of Nineveh, amid a loss at the hands of an allied army that ended the Neo-Assyrian Empire, that it was never occupied again. Components of it were reused in other, new structures (buildings like the Tomb of Jonah), once the city was reconstructed.

But the story doesn’t end there. It is, in fact a poetically linked component in a chain of lost monuments and ancient kings, dating back to one of the Seven Wonders of the Ancient World, the only one that historians have wondered if it ever existed at all.

You can still visit the Great Pyramid at Giza today. But all the other Seven Wonders are known to have been destroyed — except for the Hanging Gardens of Babylon. The presence and loss of the others — The Tomb of Mausolus, the Lighthouse of Alexandria, the Temple of Artemis at Ephesus, the Colossus of Rhodes, the Statue of Zeus at Olympia — have been accounted for in archaeological and historical documentation.

The gardens were meant to have been a series of tiers, a sort of ziggurat-like step pyramid planted with all manner of greenery at each level, but also lined with colonnades. Because there are no known Babylonian texts that refer to the gardens (which is odd considering how magnificent and noteworthy they were), some have thought they might be just a legend.

The idea of seeing the Seven Wonders was popularized by ancient Greek and Roman travel writers. But they were describing wonders that were ancient to them, centuries old, and writing circa 100 B.C. to 100 AD. Thus their own knowledge was based on hearsay, rather than firsthand examination.

The story of the Hanging Gardens has been pieced together through fractious accounts of these various ancient historians. It goes something like this: A king, possibly Nebuchadnezzar II (who ruled 605 B.C. to 562 B.C.), built the gardens for his wife, Queen Amytis, who missed the green landscape of her home in Media (in northern Iran). While classical writers described the gardens, it is unlikely that any of them actually saw them.

The most specific description comes from Diodorus of Sicily (who was active 60 B.C. to 30 B.C.). He wrote that the garden was about 400 feet on each side and “sloped like a hillside and the several parts of the structure rose from one another, tier on tier, the appearance of the whole resembling a theater.” The highest tier stood 20 meters high, “level with the circuit wall of the battlements of the city.” The walls were 22 feet thick, with walkways 10 feet wide. Diodorus described the structure of the gardens as made of brick bonded with cement, but then topped with bitumen (an ancient version of asphalt), with a layer of lead “to the end that the moisture from the soil might not penetrate beneath,” and then piled with soil and “thickly planted with trees of every kind that, by their great size or other charm, could give pleasure to the beholder.”

The detail offered suggests the description of a real place, though Diodorus wrote that a Syrian king built it, not a Babylonian one — which just confuses matters. A Roman writer, Quintus Curtius Rufus, in the 1st century A.D. described a similar structure, further lending credence to its onetime existence.

But recent scholars, like Stephanie Daley, suggest that this garden of Babylon might have been conflated with a garden that did indeed exist, for which archaeological evidence is available: a famous garden built not in Babylon but by the destroyer of Babylon, Assyrian King Sennacherib, for his capital in Nineveh. That’s right, the same king who started the palace that was just discovered thanks to ISIS’ iconoclasm.

Some ancient sources also seem to enforce this hypothesis, through exclusion rather than inclusion. It’s weird, for instance, that Herodotus, when describing Babylon, does not mention the Hanging Gardens. This suggests that this wonder was never in that city to begin with.

Meanwhile, in Nineveh, archaeologists found an 50-mile network of waterways (aqueducts, canals and dams) that carried water to the desert city, where a series of water-raising screws brought the water uphill to irrigate the gardens. If the famous Hanging Gardens of Babylon had never been in Babylon, but were in Nineveh, then they do not qualify as lost at all; the remnants can be visited today. If similar such gardens once existed in Babylon, then they might have been damaged, destroyed or their materials reused over millennia of invaders overtaking the ancient city (including during an Assyrian period, when engineers might have been inspired to create the gardens of Nineveh).

The picture grows more intriguing, as it was King Sennacherib, the man who commissioned the Nineveh gardens and ruled Assyria from 705 B.C. to 681 B.C., who ordered the destruction of all the defensive walls, palaces and temples of Babylon, as a deterrent to the regular uprising of the population against the Assyrian conquerors. If they were there at all, it was then, in 689 B.C., that the gardens met their fate —possibly only to be “rebuilt” in Nineveh, maybe even with elements dismantled and transferred to the Assyrian capital. But it remains entirely possible that they were never in Babylon at all and that instead they should have been called the Hanging Gardens of Nineveh, built by the king who razed Babylon and raised a palace there that was just discovered, thanks to the iconoclastic hands of ISIS.