Hey, wouldn't it be cool to have a constitutional convention? Oh, hell no 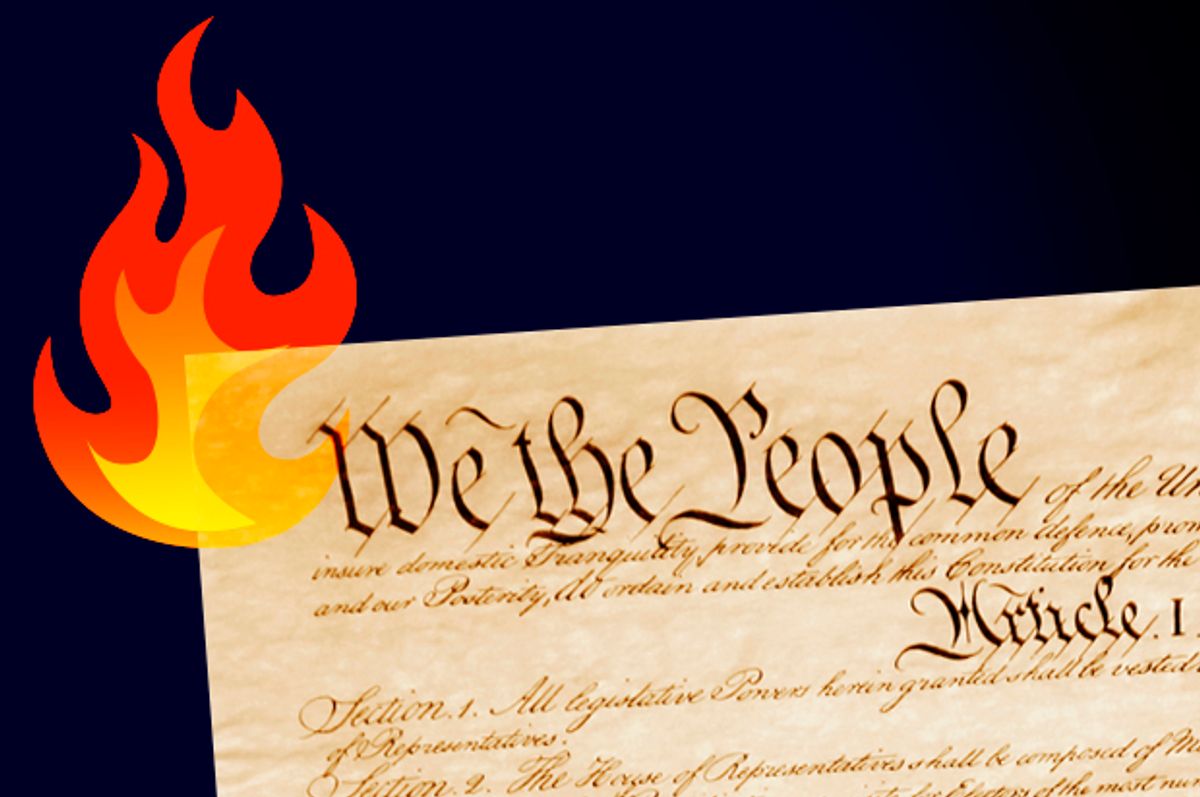 With an authoritarian bully in the White House, producing an almost daily flow of erratic threats, it can be quite a challenge to focus on other threats to the fundamental soundness of American democracy. Which is all the more reason to pay attention to them. One such threat is the prospect of a constitutional convention, called under Article V of the U.S. Constitution. In theory this provision exists as a backstop guarantor of democracy, but no such convention has been called since the 18th century. In practice, steered by conservative activists and monied special interests it could serve as a means for utterly eroding both Americans' faith in and capacity for democratic self-governance.

Common Cause recently sent out an alert warning that Wyoming had become the 29th state to call for an Article V convention to enact a balanced budget amendment, leaving activists just five states short of reaching the constitutionally required 34-state goal. Article V dictates that a constitutional convention can be called in one of two ways: Through a two-thirds vote in both houses of Congress, or by legislative majorities in two-thirds of the states. It is not just an idle threat.

“After a number of states passed balanced budget amendment calls in the '70s and '80s, the movement stalled for many years,” Scott Swenson, the vice president of communications for Common Cause, told Salon. Recently the idea has once again gained "serious financial backing from a few very wealthy special interests who find democracy inconvenient," he went on. They have used vehicles like the American Legislative Exchange Council (ALEC), which Swenson described as "a group that gets corporations to launder money as dues that are deductible, to then turn and lobby state legislatures to pass model bills that give corporations more power.”

Common Cause sounded the alarm last year with a detailed report, “The Dangerous Path: Big Money’s Plan to Shred the Constitution,” which managed to attract some attention amid the tumultuous presidential campaign. As In These Times reported, the ALEC-affiliated Balanced Budget Amendment Task Force (BBATF) has gained ground rapidly since it was formed in 2010: “BBATF has since passed resolutions in Alabama (2011), New Hampshire (2012), Ohio (2013), Georgia, Tennessee, Florida, Michigan, Louisiana (2014), South Dakota, North Dakota, Utah (2015) and West Virginia (2016), bringing the total to 28.”

“Americans should be alarmed because those pushing for a constitutional convention are close to thrusting us into a constitutional crisis," Swenson said, "and frankly, the chaos that currently surrounds the Trump administration has most Americans feeling off balance already."

Once a constitutional convention is called, all bets are off. “Regardless of why a convention is called, there is nothing to stop it from becoming a runaway convention that could ultimately overhaul the U.S. Constitution completely,” Swenson explained. “Unfortunately, the framers provided no details on how such a convention would be conducted and no brakes to stop a runaway convention. There is also no guidance on how delegates are to be chosen or even how legal disputes about the process would be settled.”

The balanced budget amendment (BBA) is a perennial conservative favorite that sounds good on the stump, but in the real world would spell disaster. Don’t take this wild-eyed liberal’s word for it. Listen to Macroeconomic Advisers, a group of conservative-leaning economists that has advised the Reagan and George W. Bush administrations and generally supports reducing the budget deficit.

In an October 2011 blog post, MA said that if a BBA had been in place at the time, “the effect on the economy would be catastrophic. ... [I]nstead of forecasting real GDP growth of 2% or so for FY 2012, we’d mark that projection down to perhaps -12% and raise our forecast of the unemployment rate from 9% to 16%, or roughly 11 million fewer jobs." The shrinking economy would then produce ... another massively unbalanced budget! D’oh!

Even in the best of economic times, the BBA would cause needless widespread suffering, as another analysis from the Center on Budget and Policy Priorities pointed out: “Social Security could not draw down its reserves from previous years to pay benefits in a later year but, instead, could be forced to cut benefits even if it had ample balances in its trust funds, as it does today. The same would be true for the military retirement and civil service retirement programs.”

The BBA is particularly dangerous because it sounds so good to so many people that it could actually get passed, while its actual economic impact would be so destructive that it could cripple any ability to correct the mistake. In that case, the entire structure of constitutional government would be at risk.

One of the leading politicians pushing the BBA is Ohio Gov. John Kasich, supposed moderate Republican and onetime Never Trumper. As explained in the “Dangerous Path” report:

In December 2014, Ohio Gov. John Kasich launched a national tour supporting an Article V convention for a balanced budget amendment. Kasich, a founding member of ALEC in the 1970s, used the tour to promote his experience in working to balance the federal budget in the 1990s. ...

Kasich has endorsed the Article V convention as a presidential candidate, stating in his economic plan that if Congress refuses to pass a balanced budget amendment, “he will work with the states to call a constitutional convention to craft an amendment that could be submitted to the states for ratification.”

Other proposed constitutional amendments are even more directly anti-democratic, such as one that would allow a small minority of Americans to invalidate any federal law or Supreme Court decision. That’s the idea behind the “Sovereignty and States' Rights Amendment,” which I wrote about here in January 2014. It would allow the state legislatures of 30 states to nullify any federal action. A majority of the 30 least populous states equates to just 12 percent of the U.S. population, and a majority of those who vote in state legislative races would be significantly less than that.

The uncontrolled and uncontrollable nature of the process should be particularly worrying — indeed, it’s why many conservatives have turned against it, from the late Supreme Court Justice Antonin Scalia to the John Birch Society. “I certainly would not want a constitutional convention,” Scalia said in 2014. “Whoa! Who knows what would come out of it?” As for the Birchers, the BBATF blames them for rolling back the balanced budget tide:

When Reagan laid down the mantle in 1989, the campaign stood at 32 states.

That’s when the tin-foil hat crowd at the John Birch Society (JBS) took up the attack for the far-left as the main purveyors of the run-away convention myth. From 1988 to 2010, they duped 16 states into rescinding their applications, leaving only 16 of the original 32 intact.

The Birchers may be the kings of paranoia, but this time around they’re right. A constitutional convention could do almost anything, as the Center on Budget and Policy Priorities analysis observed:

Perhaps a year ago, most folks would have shrugged off suggestions that a seemingly orderly constitutional process could turn messy, unpredictable and out of control. But after the election of Donald Trump and the ongoing chaos his first few weeks in office have brought, the indeterminate nature of what could happen at a constitutional convention no longer seems like a remote possibility. Things could change radically and rapidly; there’s no telling where we might end up.

Failure to realize this is probably why more people aren’t alarmed already, Swenson noted. “Many supporters of a constitutional convention believe they can limit it to one issue. On the right the driving force is a Balanced Budget Amendment that sounds good on its face but would have disastrous consequences, which is why many Republicans oppose it. On the left, overturning Citizens United is what motivates some – and Common Cause agrees with that goal. We simply believe that the way Americans have amended the Constitution for more than two centuries, as nearly every generation has done, is preferable.”

It would be a tragic irony if folks who were trying to fight the influence of money in politics ended up augmenting it instead. But that would be a distinct possibility in this scenario, Swenson said. “We are in an unprecedented period of inequality and political instability. Selling off 240 years of the greatest experiment in self-governance known to man, and the most successful, to a feeding frenzy of special interests with the biggest checkbooks makes no sense. Big money is driving the current campaign to call a convention, and it’s not going to fold up its tents and go home if it succeeds.

“People should learn about the issue and where their state legislatures stand on it," Swenson continued. "They should let their representatives know that they do not want to see the U.S. Constitution opened up to a complete rewrite. Depending on the state, people can fight against calls for a convention or for calls for rescission.”

What’s lacking to this point is an organizational response to match what big money and conservative activists are doing. The enormous response to Trump’s election seen in the formation of Indivisible groups and similar organizations highlights the kind of mobilization that’s needed. But those groups have largely focused on the 2018 congressional races, and there's not nearly as much awareness about how important state legislatures are.

State lawmakers arguably matter more than members of Congress in many ways, including the fact that they will determine the next round of congressional redistricting after the 2020 census. The threat to democracy posed by a runaway Article V constitutional convention provides one more urgent reason why progressives need to develop a similar level of organization focused on state representatives. The time to act is now, before it is too late.