"Me and you ain’t you and her": How "Hap and Leonard" challenges TV's portrayal of masculine friendship

Buddy crimesolvers are nothing new. But Sundance's drama uses its central pair to show how love battles injustice 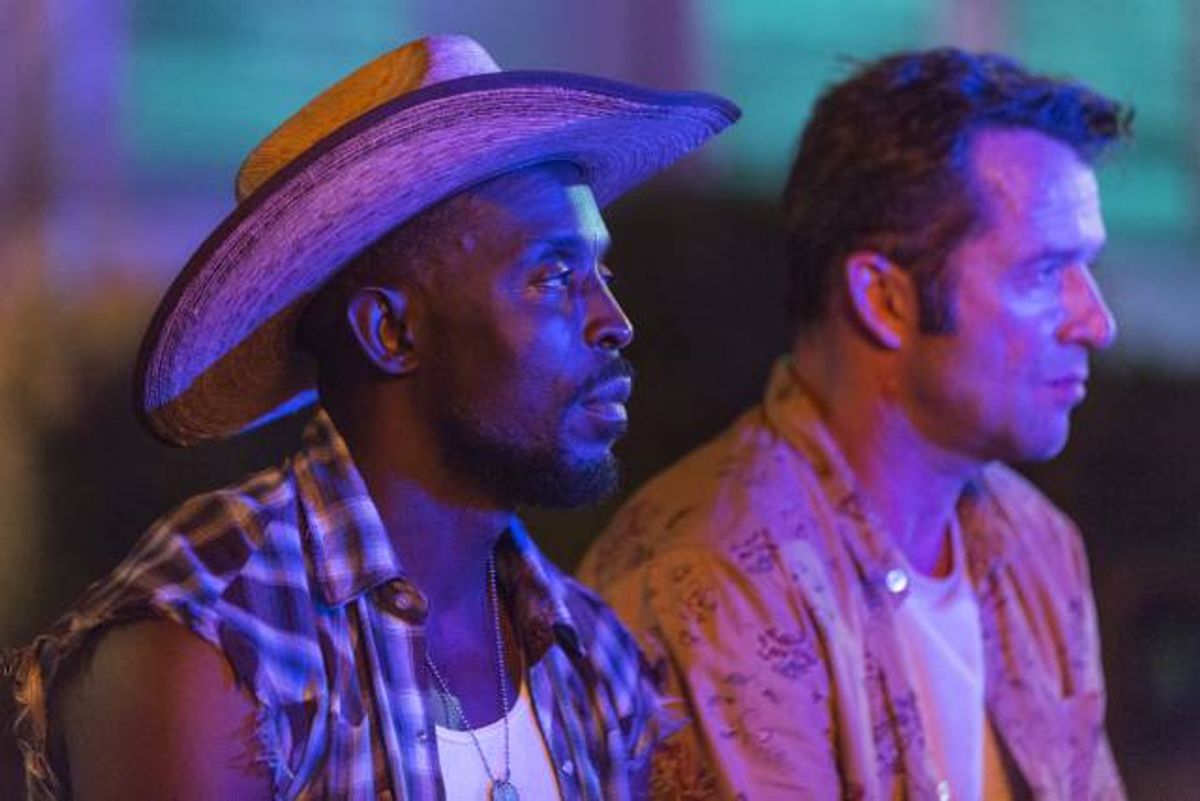 Strip away the so-called “swamp noir,” a label describing the East Texas twang born of a meeting between arid and sultry. Look behind the curtain of its murder mystery, which careens through turns that are at once predictable and obscenely unfair, and see Sundance’s “Hap and Leonard” for what it is — a wonderful platonic love story.

Hap Collins (James Purefoy) and Leonard Pine (Michael Kenneth Williams) aren’t even an unconventional duo. The lifelong best friends express how they feel to one another without compunction or a hint of awkwardness; that Hap is straight and Leonard is gay is just part of who they are.

To view the men purely through the lens of that description, though, makes them seem like a gimmicky take on the long line of buddy action duos. “Hap and Leonard,” returning for its second season Wednesday at 10 p.m., draws somewhat on the tradition set in place by “Starsky & Hutch,” Crockett and Tubbs of “Miami Vice” and Ponch and Jon of “CHiPs” fame, ensuring we know at least some of the dynamics that makes them work. One’s a hothead, the other a by-the-book Boy Scout, and so on and so forth.

That said, Hap and Leonard aren’t cops -- Hap is an ex-con who went to jail for refusing to go to Vietnam, Leonard is a proud veteran of that war. They’re two good guys aching to do right by the people they encounter over the course of this new six-episode season, but who end up running afoul of the local law no matter what they do.

Grounding “Hap and Leonard” in a devoted, affectionate male friendship goes counter to the standard vision of machismo or manly identity seen elsewhere on TV. Mind you, Hap Collins and Leonard Pine fit the popular concept of what it means to be masculine. (Leonard is a brawler, in fact. In the season premiere he beats a criminal senseless for urinating on his prized rosebush, topping off the incident by repaying the offense in kind.)

Since “Hap and Leonard” establishes the intensity of their brotherhood, it can take the audience into uncomfortable places and make broader topics of prejudice and injustice personal.

It’s not as if the first season of “Hap and Leonard” ignored the fact that Hap is a white ex-convict and Leonard is an African-American with dark skin having adventures in the Reagan-era South. The previous story was a caper involving Hap’s ex-wife Trudy (Christina Hendricks), who got them into trouble with nihilistic thugs. Television writers love to punctuate the villainy of such characters by having them sprinkle their vocabulary with epithets as casually as a smoker taps cigarette ash onto concrete. Leonard sustained his share of such abuse.

But the racial divide in the second season is distinct and purposeful, adding an anxious edge to Hap and Leonard’s interactions with the law — more specifically, Leonard’s troubles. And this new act makes “Hap and Leonard” into an allegory illustrating the senselessness of America’s racial divide, showing a community where black and white people live in close proximity while leading almost entirely separate lives. The drama may take place in the late 1980s, but its observations about law enforcement bias and the prejudice corrupting the judiciary are right on time.

These new episodes are based on Joe Lansdale’s novel “Mucho Mojo” and follow the botched first-season schemes that left both friends in mourning. Leonard makes out a bit better, having inherited his uncle’s house; the only piece Hap has left of his great love is a box of ashes. (Said remains become a fulcrum for the episode’s physical comedy that the writers conclude quickly and with appropriate solemnity.)

Forlorn, Hap turns to Leonard only to find him in the midst of a brewing war with some drug dealers next door, which isn’t as worrisome as the child’s skeleton he finds in the crawlspace under his uncle’s house. But when Hap tells the police about the bones, Leonard becomes a convenient prime suspect. Local attorney Florida Grange (Tiffany Mack) emerges to assist Leonard out of a sense of indebtedness to his late uncle, who Leonard discovers much more about in death than he knew when the man was alive and they were estranged. Florida also is easy on the eyes, and considerably shortens Hap’s mourning period.

Hap’s experience of being a minority is cake and pie in comparison to Leonard’s last season; people mostly just give him the side-eye or assume he’s lost. But the writers also acknowledge the privilege Hap has by nature of being a white man in small-town Texas, especially when he needs to grease the wheels of justice on Leonard’s behalf.

There’s an innocence about the pair, too, revealed through the second season’s murder mystery involving the vanishing of more than 20 young black boys, a case reminiscent of the Atlanta child murders that occurred between 1979 and 1981. Local law enforcement has given up on finding these children, but Hap and Leonard have to solve the mystery if only to save Leonard from imprisonment.

The oaken friendship in “Hap and Leonard” allows the plotline’s racial context to feel more affecting and salient than other higher-profile series addressing similar themes. Williams and Purefoy are an incredible comedy team, perking up the bleakest situations with their back-and-forth bickering. Those moments earn the viewer’s investment in the toughest parts of the story and never allow the energy in “Hap and Leonard” to deflate.

That the murder case ensnares Leonard raises this season’s emotional stakes, particularly in scenes showing Leonard enduring physical cruelty. How impactful those moments feel may depend on whether you’ve seen the first season of “Hap and Leonard,” although you don’t need to have viewed it to understand what’s going on. Williams and Purefoy are close friends in the real world, and their onscreen chemistry bridges any storytelling gaps. Williams is especially gifted at expressing pain and frustration without words. The look on his face during one of Leonard’s more punishing humiliations may bring tears to your eyes.

Season 2 introduces a new set of characters, including Brian Dennehy as local sheriff Valentine Otis. Had another actor played him, Otis would probably be a parody of Boss Hogg, but Dennehy makes him seethe with menace. Irma P. Hall stands out as MeMaw, the kindly old lady who watches over the neighborhood and helps Leonard reconcile with his past. In a season steeped in memory, Hall’s MeMaw prevents us from being suckered by nostalgia. MeMaw longs for a time when the people in her community took care of one another and never sugars over the fact that they did so because nobody else would.

Barbed as its observations about race and class can be, “Hap and Leonard” nevertheless embraces its audience with liberal servings of humor and the heartfelt bond between the two leads. And actually, Hap’s crush on Florida serves to spotlight their enduring loyalty as opposed to splitting them, simultaneously speaking to the societal conflict threaded through this season.

“She black,” Leonard says to Hap, later adding, “And you ain’t.”

“That never stopped me and you,” Hap retorts, to which Leonard delivers the perfect rebuttal: “Me and you ain’t you and her.”

Leonard’s right. Plainly they mean much more to each other.