No apologies: Being Donald Trump means never having to say you're sorry — and it works 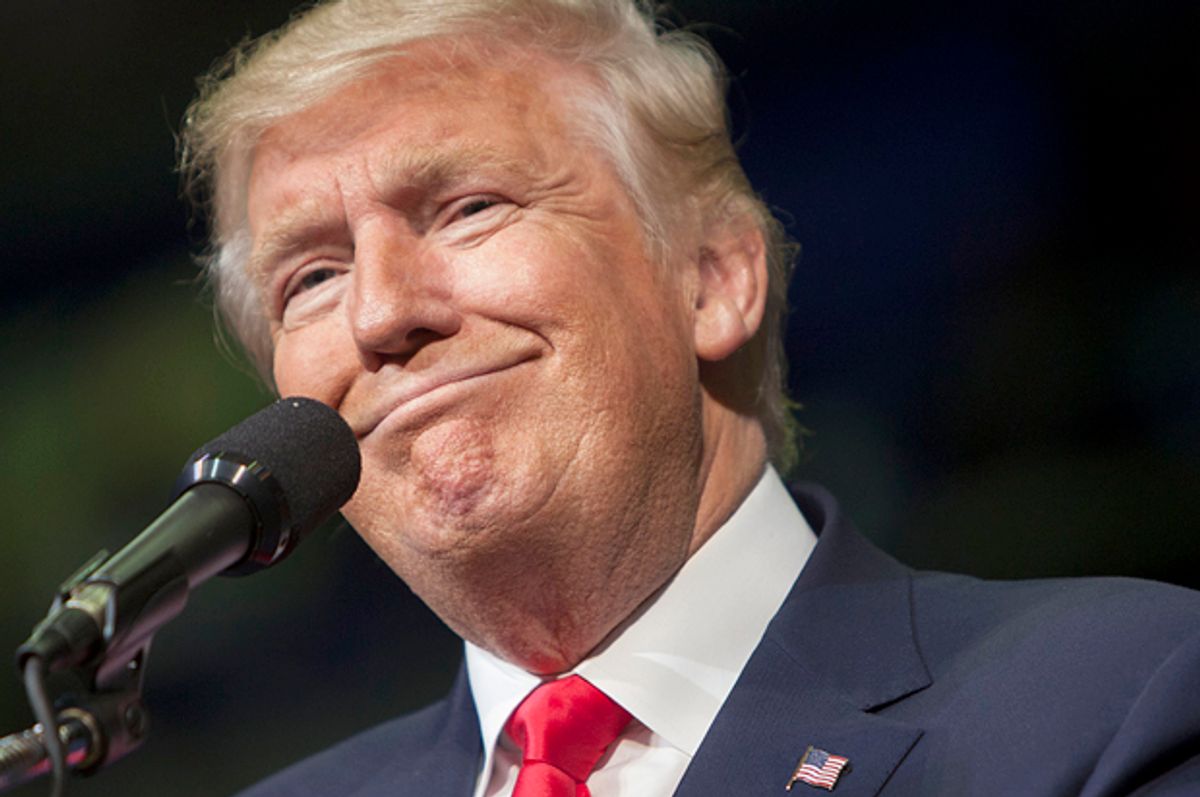 If there's one thing we should have learned by now it's that being Donald Trump means never having to say you're sorry. Trump never apologizes for anything and does not clarify or correct the record. Sometimes he will simply pretend that he never said what he said and will change direction without explanation, while blaming others for his mistakes.

Trump was asked numerous times during the early part of the campaign by earnest religious questioners if he had ever asked God for forgiveness. He gave this cavalier answer:

I am not sure I have. I just go on and try to do a better job from there. I don't think so.  . . . When I drink my little wine — which is about the only wine I drink — and have my little cracker, I guess that is a form of asking for forgiveness, and I do that as often as possible because I feel cleansed.

Anderson Cooper followed up on that comment and asked him to clarify. This is what he said:

Why do I have to repent or ask for forgiveness, if I am not making mistakes? I work hard, I'm an honorable person.

Jimmy Fallon asked Trump about this again and he said, “I fully think apologizing is a great thing, but you have to be wrong. . . . I will absolutely apologize sometime in the distant future if I'm ever wrong.”

When you look back at the presidential campaign, it's astonishing how much Trump got away with: endless lies, unproven accusations, crude attacks and character assassination nearly every single day without his ever expressing regret. He never apologized for retweeting an unflattering picture of Sen. Ted Cruz's wife, juxtaposed with an image of Melania Trump from a professional photo shoot. He shrugged it off, calling it justified retaliation. Not long after that, he accused Cruz's  father of being involved in the assassination of former President John F. Kennedy. There's no evidence that he felt any regrets about that either.

Recall that Trump sent bigoted tweets throughout the campaign, retweeting bogus statistics on African-American crime statistics and passing along anti-Semitic tropes about rival candidate Hillary Clinton's alleged corruption featuring the Jewish star prominently displayed in the graphic. He blamed his social media director and Clinton herself for spreading "false attacks."

Trump never apologized to U.S. District Judge Gonzalo Curiel, after claiming he couldn't be impartial in the Trump University fraud case because of his Mexican heritage. And to this day Trump has evaded responsibility for his reprehensible and childish mockery of New York Times reporter Serge Kovaleski's physical disability; Trump claimed that he wasn't doing what he was clearly doing.

Plus Trump said he had no regrets about insulting Ghazala Khan, who stood with quiet dignity next to her husband at the Democratic National Convention as he spoke out against Trump's demagogic rhetoric and policies toward Muslims. He has never apologized to Megyn Kelly or Katy Tur or any other member of the press corps whom he has viciously attacked.

And then there was the most famous non-apology he ever gave, the notorious "rick-rolling" press conference when he gave a deplorable set of lies about the birther controversy. Here's Trump's spokesman Jason Miller's statement:

Hillary Clinton's campaign first raised this issue to smear then-candidate Barack Obama in her very nasty, failed 2008 campaign for president. This type of vicious and conniving behavior is straight from the Clinton playbook. As usual, however, Hillary Clinton was too weak to get an answer. Even the MSNBC show "Morning Joe" admits that it was Clinton's henchmen who first raised this issue, not Donald J. Trump.

There was one campaign incident that led Trump to say he was sorry — the "pussy grabbing" tape. But that surely was one of the most ungracious apologies in history, a wooden taped performance, ending with a petulant whine to the effect that former President Bill Clinton was much worse than him and claiming that Hillary Clinton was the real bully.

Since Trump has become president, he has warned that if a terrorist attack were to happen on American soil he will hold the judiciary responsible, because judges shot down his blatantly unconstitutional travel ban. He crudely blamed the entire responsibility for the botched raid in Yemen, which left a Navy SEAL and 30 other people dead, on military commanders.

The buck always stops somewhere else.

A week ago on Saturday Trump caused a big stir by taking to Twitter to accuse former President Obama of wiretapping Trump Tower during the presidential campaign — apparently Trump did so after reading some hyperbolic speculation on Breitbart News. Despite his long history of refusing to accept responsibility for anything, political leaders like Sen. John McCain have persisted in demanding that Trump do so. This past Sunday when asked by CNN's Jake Tapper about the wiretapping accusation, McCain replied, “The president has one of two choices: Either retract or provide the information that the American people deserve.”

We know that if Trump were to retract his statement it would mean admitting that he'd gone off half-cocked on his early-morning Twitter rant. That is simply not going to happen, so why waste any breath asking for it?

The sad fact is that Trump may be savvy in doing what he's doing. A 2011 academic study in the journal Social Psychological and Personality Science called "Breaking the Rules to Rise to Power" explained it this way:

Powerful people often act at will, even if the resulting behavior is inappropriate — hence the famous proverb “power corrupts.” Here, we introduce the reverse phenomenon — violating norms signals power. Violating a norm implies that one has the power to act according to one’s own volition in spite of situational constraints, which fuels perceptions of power.

To illustrate how Trump instinctively understands that this pleases his followers, consider what he said when quizzed about whether he was sorry for insulting McCain by saying he "preferred people who weren't captured":

I don't, you know — I like not to regret anything. You do things and you say things. And what I said, frankly, is what I said. And, you know, some people like what I said, if you want to know the truth. . . . You know, after I said that, my poll numbers went up 7 points.

Trump doesn't take responsibility for the false or insulting things he says because he knows they make him look powerful to the only people he cares about — his voters. But he has real power now, and he's going to be judged by results from here on in. Let's hope those results aren't as awful as his words have been or the whole country is going to be very sorry, very soon.