A new poll shows white evangelicals are out of step with the country, which may explain their resentful behavior 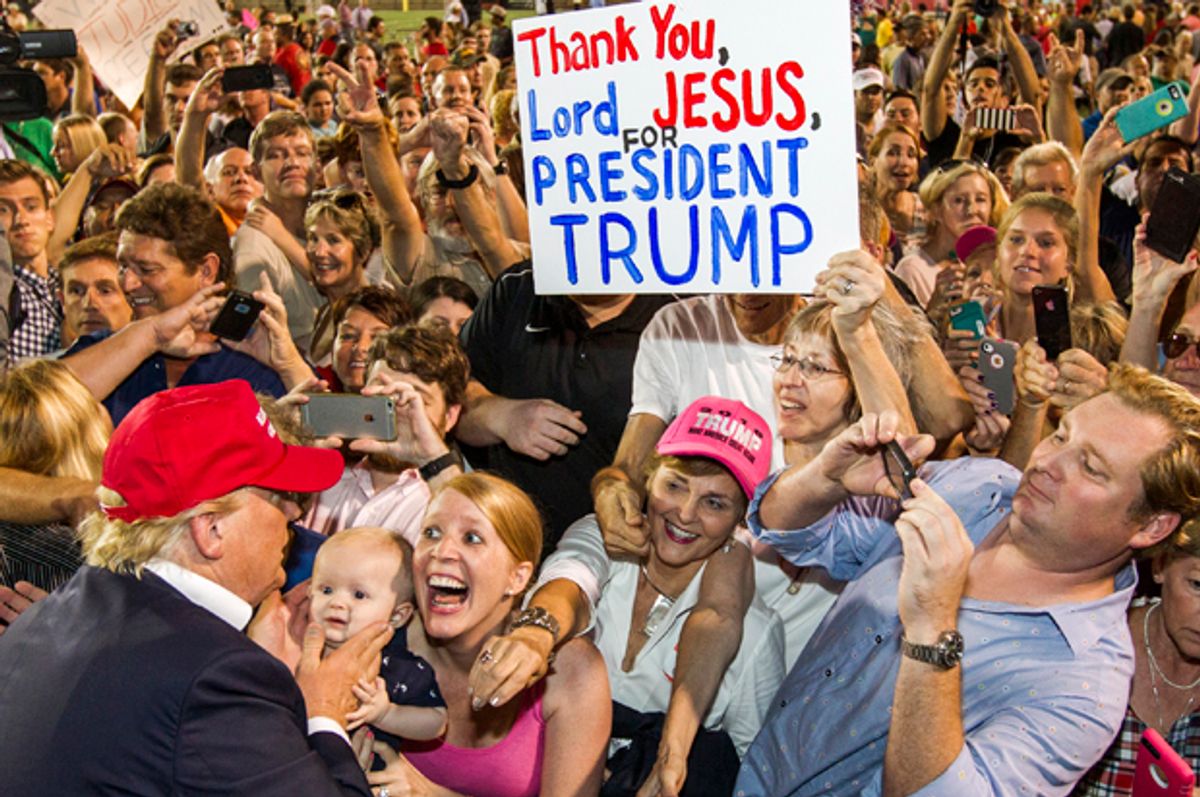 Despite all the posturing by conservatives about how their movement represents "real" America and liberal political attitudes are restricted mainly to the "coastal elite," new research from the Public Religion Research Institute suggests that, at least in political terms, most Americans are secular in their orientation. While many Americans may still hold conservative personal beliefs, when it comes to the issue of church-state separation, large majorities are rejecting efforts by the religious right to use the power of the state to impose conservative Christian values on others.

In fact, the polling data shows there's really only one group of Americans that rejects a secular society: white evangelical Christians. And this study is just further evidence that a lot of the political polarization in our country is the direct result of white evangelical Christians realizing that they no longer are the dominant majority and lashing out angrily in an effort to regain the levels of influence they used to enjoy. You see similar results concerning the issue of marriage between same sex couples, which has encountered a dramatic rise in acceptance in recent years. Sixty-three percent of the Americans surveyed this year by PRRI said they support marriage for same-sex couples, a rise from 51 percent in a similar 2013 PRRI survey. But white evangelicals, and to a lesser extent black Protestants, refuse to get on board.

When I spoke with Daniel Cox, the director of research for PRRI, about this survey, he emphasized that the gulf between white evangelicals and everyone else goes a long way toward explaining how Donald Trump was able to turn out white evangelicals at the polls, despite his seedy personal history and inability to put on a persuasive display of individual religiosity.

“Yes, there were a lot of feelings of economic insecurity, but there [were] also pervading and pervasive cultural fears that the U.S. was changing, not just racially and ethnically, but religiously as well," Cox said.

The trends that are making white evangelicals nervous, Cox explained, are real enough. "We’re seeing, just during the Obama era, a significant drop in Americans who identify as white Christian," he said. Instead, the number of Americans who claim to have no religious affiliation or who align themselves with a non-Christian religion is rising.

Trump didn't need to convince conservative Christians that he was one of them to receive their votes for his presidential bid, Cox suggested. All he needed to do was to assure them that he saw that they represented a privileged category and he would treat them as such.

“At a time when white evangelical Protestants were really feeling under assault culturally, you had someone pugnaciously saying, ‘You know, we’re going to turn back the clock to a place where you were so much more comfortable and you had more influence,'" Cox said. He observed that Trump won an even bigger share of the white evangelical vote than even George W. Bush, even though the latter was indisputably a person of faith who was fluent with white evangelical traditions.

The PRRI survey shows that many white people, especially white conservatives, are confusing the loss of cultural dominance with oppression. While nearly every other group of Americans believes that Muslims face more discrimination than Christians in the United States, white evangelicals hold the reverse to be true. Here's another symptom of growing secularism in America: The religious right is finding it harder than before to whip the public into some kind of social panic about cultural change. When the issue of marriage for same-sex couples first emerged onto the public radar, Cox said, the majority of Americans bought into religious right claims that legalizing it would somehow damage the institution of marriage. Now the religious right is trying to do the same thing with transgender people, painting them as a threat to society, but the public isn't biting.

"When it comes to the issue of transgender rights, there’s not going to be as steep a learning curve as when it came to the rights of gay and lesbian people,” Cox claimed.

More than half of the Americans surveyed say they support the right of transgender people to use a bathroom corresponding to their gender identity. The divide on this issue is deeply partisan, with independent and Democratic voters supporting trans people and Republicans rejecting trans rights.

PRRI had a similar finding concerning insurance coverage of contraception, previously a noncontroversial idea that a few years ago the Christian right began making hay about. Despite a huge propaganda push from the right to characterize contraception coverage as immoral and greedy, two-thirds of the Americans polled said they believe the government should require insurance plans to cover birth control.

But while the public is politically secular, Cox noted, the United States still has "this strong culturally conservative streak that runs through our politics."

PRRI's survey picked this up in a clever way: While LGBT and contraception-access issues are framed in terms of "rights," the question of premarital sex is framed in terms of "morals." That shift in framing drastically changes the levels of public approval. Nearly half of the Americans surveyed — 48 percent — said that any sex outside of a marriage between a man and a woman was immoral. Only 49 percent of the respondents allowed that there are other ways to have sex that can be morally acceptable.

“It’s important to remember that rights and morality aren’t really the same thing," Cox said, by way of explaining how so many Americans can simultaneously embrace legalized marriage for same-sex couples and contraception coverage, while also rejecting a behavior — premarital sex — that nearly everyone participates in at some point.

I'd argue that this finding shows that American attitudes about sex are aspirational, if you're feeling generous, or hypocritical, if you're not. Unless PRRI accidentally stumbled on a rare vat of virgins (which is highly unlikely), the vast majority of people who expressed moral disapproval of nonmarital sex have themselves had it. A famous 2006 Guttmacher poll showed that 95 percent of the Americans surveyed have had premarital sex at some point in their lives, so this PRRI finding can safely be seen as a do-as-I-say-not-as-I-do result.

But, as Cox pointed out, white evangelicals — 83 percent of whom said they disapprove of premarital sex — show considerable distance between their moral aspirations and their actual behavior in other areas of life, too. They disapprove of divorce and gambling in large numbers, he said, but they divorce and hit the casino in the same numbers as everyone else.

The good news is that the younger generation is a little better at aligning stated values with its experiences.

Of course, this shift goes a long way toward explaining Trumpism. Nearly everyone has sex outside marriage, but the expectation about feeling bad or guilty about it is fading with the younger generation. That refusal to pay tribute to hypocritical social values is part of the societal shift that is making conservative Americans, especially white evangelicals, so angry. The same people who thought this would always be "their" country are not only finding that the laws are geared toward a diverse and tolerant nation, but also that even their cultural values, like disapproval of premarital sex, are on the wane. In this context, Trump has become their weapon for lashing out.