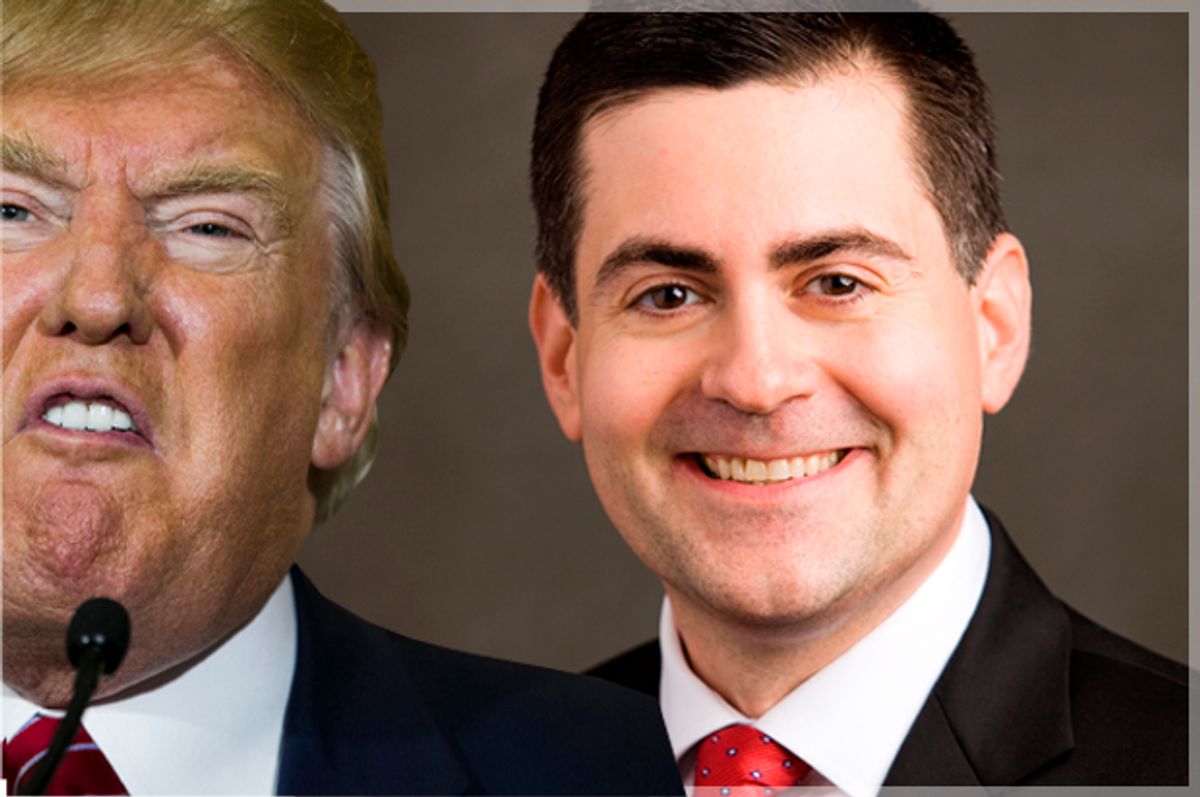 White evangelical Americans overwhelmingly voted for Donald Trump last November, which may explain why a senior Southern Baptist leader who vigorously opposed the president during the GOP primaries has been facing calls for his resignation.

Russell Moore, a theologian who chairs the denomination’s Ethics and Religious Liberty Commission, has long been a critic of the old-school religious right. With Trump’s ascent to the presidency, Moore’s many internal critics have finally found the perfect opportunity to go after him since the group he heads is supposed to be the Southern Baptist Convention’s presence in the capital.

The tensions between Moore and his critics came to a head at a Monday meeting where Moore reported to the Southern Baptist Convention's top leadership for a meeting to discuss complaints from many of the denomination's churches about his views.

According to Baptist Press, the discussion between Moore and Southern Baptist Convention leader Frank Page at no time centered on whether Moore should resign his position, in contradiction to a report published by  The Washington Post earlier in the day. The publication had quoted Page as saying that he had "no authority" over Moore's employment.

"We fully support one another and look forward to working together on behalf of Southern Baptists in the years to come," the two men said in a joint statement. "We will collaborate on developing future steps to deepen connections with all Southern Baptists as we work together to advance the Great Commission of our Lord Jesus Christ."

With an estimated 15 million members in the United States, the Southern Baptists comprise the nation's largest Protestant denomination and the second-largest Christian group after the Roman Catholic Church.

For some time now Moore has come under fire from conservatives within the Southern Baptist Convention for an array of alleged misdeeds, including the fact that he had once worked for a Democratic member of Congress. As one critic put it last year on a popular Baptist blog, “Is it a Southern Baptist value to support a partisan of Nancy Pelosi?” (Gene Taylor, the U.S. representative for whom Moore once worked, later left the Democratic Party and became a Republican.)

Moore has also been criticized for telling evangelicals to prioritize growing their movement and saving souls over political activism. In a speech he delivered in October, the Ethics and Religious Liberty Commission head condemned the religious right for being too closely aligned with the Republican Party.

“My faith was being used as a way to shore up Southern honor culture, mobilize voters for political allies and market products to a gullible audience,” Moore said in reference to church leaders he had observed in his youth.

The 45-year-old reverend has also supported efforts to grant citizenship to some illegal immigrants in the U.S., which has earned him much opprobrium in certain quarters.

While his writings and speeches have angered many within the Southern Baptist community, Moore has found some internal defenders among the small minority of convention members who are black, thanks in part to his discussions about the Southern Baptist Convention’s racist history. (The convention officially defended slavery, segregation and white supremacy in the past, a history it did not directly confront until 1995.)

Monday's meeting was prompted after more than 100 Southern Baptist congregations announced they were withholding donations to the Southern Baptist Convention in protest of Moore. Those complaints were not resolved during Monday's meeting; rather, they are to be resolved by a commission appointed by the denomination's executive committee, which will deliver a report in September with recommendations on reconciliation.

“The outcome of this investigation will speak volumes to Black Southern Baptist Convention Churches as to whether or not any church leader or entity head who publically [sic], critically evaluate President Donald Trump will be welcome in the Southern Baptist Convention and eligible to serve in any and all levels of denominational life,” Dwight McKissic, a black, Arkansas-based minister, wrote last week.

Moore’s critics have accused his defenders of unfairly injecting race into the mix and say his tone is what's of most concern. They say that Moore’s frequent judgments of evangelical culture and politics have been excessively personal and “snide,” especially in regard to Trump.

“When Dr. Moore wasn’t engaging in snide comments about Donald Trump, he was busy insulting evangelical voters who supported the now president-elect,” an Alabama-based blogger wrote in December. “Clearly, he attacked evangelicals who voted for Trump and insinuated they were less Christian.”

Opponents of Moore have also accused him of collaborating with George Soros, a billionaire known for his donations to left-wing political causes.

Swain, who is black, also charged Moore’s left-leaning minority supporters with unfairness. “I believe [criticisms of Moore] are related to his purported ties to Soros-funded groups and his failure to disclose his party affiliation in his attacks against candidate Trump. No one should be surprised that black leaders would racialize the investigation."

Other Moore critics have accused him of stepping beyond his authority and making pronouncements on issues that are contentious within the larger Southern Baptist community.

“Somehow the [Ethics and Religious Liberty Commission] has morphed into something that it was not meant to be,” wrote William F. Harrell, a Georgia-based minister.

“It seems that the more we hear from Russell Moore the more we have to conclude that the ERLC has become a divisive entity in our midst," Harrell continued. "It was not meant to be so. It was meant that it would represent the values and opinions of those who are responsible for its existence, the people" of the Southern Baptist Convention.

How the Southern Baptist Convention chooses to resolve the issues presented and embodied by Moore may likely determine the future of the church. According to a 2013 report released by the denomination, 60 percent of Southern Baptist Convention churches had no baptisms for children ages 12 to 17. Last year marked the ninth year in a row that attendance at member churches declined.

Whatever measures on which the Baptists manage to agree may ultimately not matter, however, as Americans have been becoming less religious each passing year. Both "conservative" and "liberal" denominations have been affected by this larger trend.