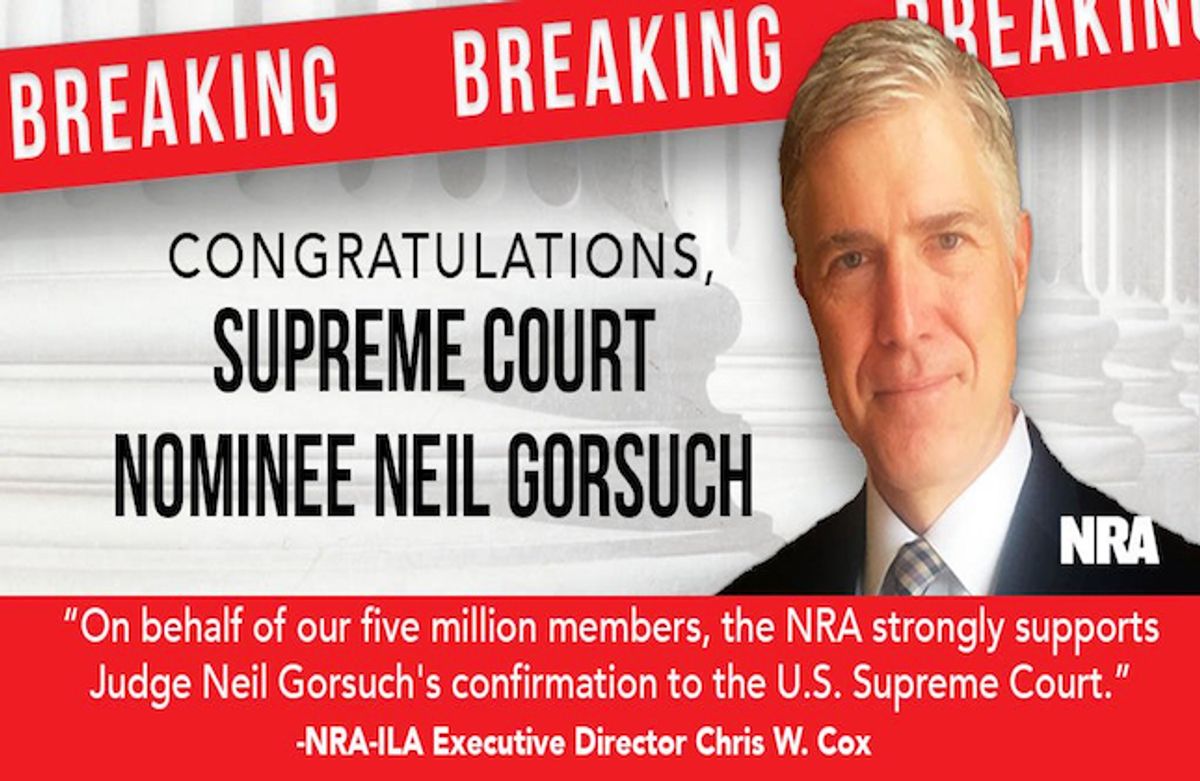 Nearly one year ago, then-Senate Minority Leader Mitch McConnell made a stunningly honest admission: No Supreme Court nominee would be confirmed without the approval of the National Rifle Association. The Kentucky Republican told Fox News last March that even if the Democratic nominee eventually won the presidential election, "I can’t imagine that a Republican majority in the United States Senate would want to confirm, in a lame duck session, a nominee opposed by the National Rifle Association."

Now that the U.S. Supreme Court seat last occupied by Antonin Scalia has sat vacant for more than six times longer than the average length of the previous 15 high-court vacancies, the NRA is launching a $1 million television advertising campaign in support of President Donald Trump's nominee Neil Gorsuch.

McClatchy News reported the $1 million launch will place ads across the nation on broadcast, cable and satellite starting Tuesday through March 22. The campaign will reportedly emphasize the impact the Supreme Court has on gun rights.

"Four Supreme Court justices believe you have the right to defend yourselves with a gun," the ad begins. "Four do not," the narrator then says, alluding to Justices Ruth Bader Ginsburg, Stephen Breyer, Sonia Sotomayor and Elena Kagan. "The men and women of the NRA will not let anti-gun elites strip away our rights or our freedom."

The NRA's ad blitz looks to capitalize on Democrats apparent slow start to any opposition campaign against Trump's pick. Republicans refused to give Judge Merrick Garland, President Obama’s nominee, a hearing or a vote last year, arguing that the vacancy shouldn’t be filled during a presidential election year.

“The only thing we’ve decided as a caucus is to ask members not to make any public commitments until the hearing phase is finished,” Senate Minority Whip Dick Durbin, D-Illinois, recently told Politico. According to Politico, Gorsuch already "has breezed through more than 70 meetings with senators."

Senate Democrats have vowed to filibuster the conservative-leaning Gorsuch, meaning 60 senators would have to vote in favor of his confirmation, McClatchy noted.

“You need nine members. It doesn’t work with eight,” West Virgina Democratic Sen. Joe Manchin said of the Democrats who would deny Gorsuch a seat. “I understand the Democrats being so upset. I understand it. … That doesn’t make it right to go along with eight. If you think [Republicans] are going to give you a center-left [judge], they’re not! Come to grips with it.”

Gorsuch's confirmation hearings before the Judiciary Committee are scheduled to begin Monday and are expected to last several days. Now-Senate Majority Leader Mitch McConnell said he aims to hold a floor vote before the Senate leaves for its Easter recess, currently set to begin April 8.

“There’s a fierce urgency at the grass roots that is not being echoed by the Senate Democrats,” Ben Wikler, the Washington director for MoveOn, which joined 10 other groups in a letter urging Senate Democrats to step up criticism of Gorsuch, told Politico. “The notion that Democrats should wait until after the hearings to speak their mind is a strategy to win a race by running hard in the last 30 seconds.”

But California Sen. Dianne Feinstein, the top Democrat on the Judiciary Committee, pushed back on the pressure emanating from the Democratic activist base.

“Why have a hearing if everybody is going to take a position?" she asked. "So to be talking about whether I’m for or against at this stage makes no sense at all to me because it’s uninformed.”

Liberal groups are opposing Gorsuch's nomination, in part based on views that his overall record on criminal justice is too harsh. Gorsuch’s views lean conservative and the judge sat on the Court of Appeals for the 10th Circuit covering Colorado, Kansas, New Mexico, Utah and portions of Oklahoma for a decade.

UCLA law professor and Second Amendment expert Adam Winkler recently noted to the Guardian that in the gun cases that Gorsuch has decided, his opinions “ very much fall in line with the NRA’s view.”

Chris Cox, president of the NRA Freedom Action Foundation, told McClatchy that the group supports Gorsuch because the Supreme Court has "played a pivotal role in affirming our Second Amendment rights in its historic Heller and McDonald decisions." Cox explained that "it’s critical for Americans to remember that their basic right to keep a gun in their homes for self-defense survived at the court by only one vote. This ad campaign highlights that important reality.”

In a 2012 dissent, Gorsuch stressed that “Gun possession is often lawful and sometimes even protected as a matter of constitutional right,” noting that a felon convicted of possessing a firearm “might very well be wrongfully imprisoned.”

He has also generally ruled against defendants who claim they received unfair trials and those appealing their convictions.

In 2013, Gorsuch wrote a majority opinion ruling that a police officer did not use excessive force when he shot a man suspected of growing marijuana in the head with a stun gun during a chase. Gorsuch's colleague on the bench, however, noted that the officer's training manual specifically warned against aiming a stun gun at the head unless necessary.

Gorsuch said the situation facing the officer at the time was "replete with uncertainty and a reasonable officer in his shoes could have worried he faced imminent danger from a lethal weapon." The suspect died from his injuries.

"At a time when the abuses of our criminal justice system are becoming a national crisis, we cannot confirm a justice who does not understand the role of the Supreme Court to protect the most vulnerable among us," said a report from People for the American Way, a liberal advocacy group.

Still, the NRA has praised Gorsuch as an "outstanding" pick.

Despite the NRA's planned million dollar ad buy, Democratic Senate Minority Leader Chuck Schumer brushed off the campaign to push through Gorsuch's nomination. “Obviously, the social issues are always looming out there with any justice,” Schumer recently told The New York Times. “But where he’s particularly vulnerable is in this antiworker, pro-corporate record. And second, he cannot really cite examples of him being independent other than saying, ‘Ask people.’”

Realistically, however, there is little Democrats can do to stop the NRA and Gorsuch without triggering the so-called nuclear option.

“When is it that [Democrats] fall on the sword?” New Jersey Democratic Sen. Robert Menendez told Politico, summing up his party’s quandary. “Is it on this one or the next one?”